Initially I was pretty unimpressed with Chanel's holiday 2016 lineup, as early reports indicated that there wouldn't be any sort of show-stopping palette for the season.  But I should have known Chanel had a very beautiful surprise up their sleeve!  Behold, the exquisite Ombres Lamées palette.

Unlike some of their previous palettes, this one comes in a luxurious pebble-textured box with two separate brushes. 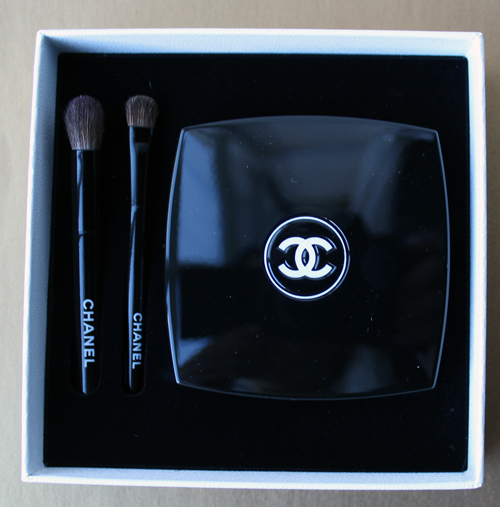 The design is inspired by the fall 2016 runway collection.  We'll look at that in a second, but in the meantime, you must appreciate the palette in all its intricate golden glory. 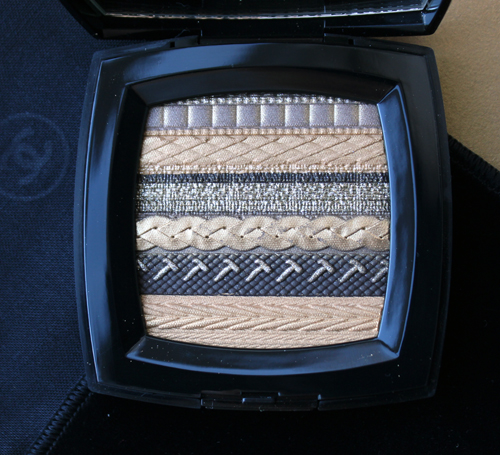 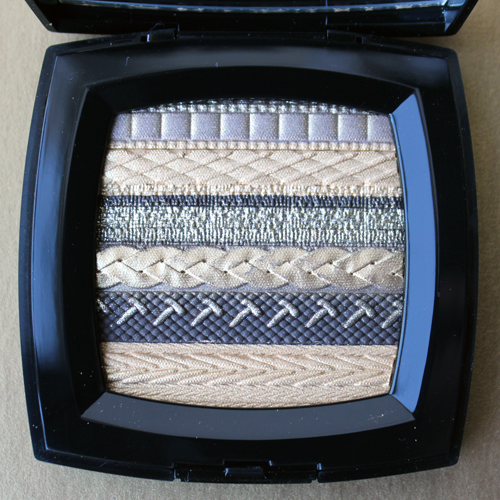 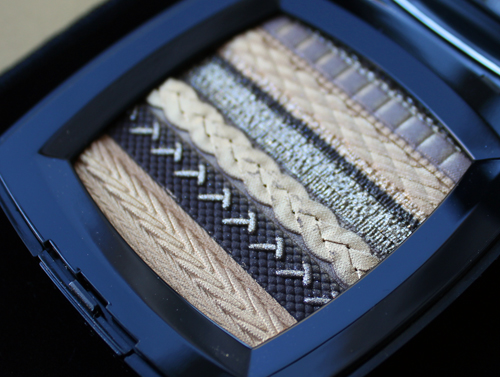 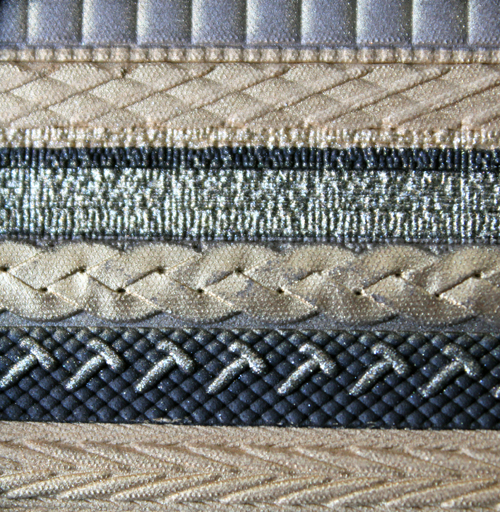 I did my usual "let's find the pattern match from the fashion" but I discovered that the palette was indeed only "inspired" by the fall 2016 collection rather than being a literal recreation of some of the patterns.  Still, the designs on the palette are faithful to the runway pieces in that they represent the gold thread woven into the clothing in a variety of ways, from the traditional Chanel tweeds to chunky knit sweaters and lamé skirts.  There was even a bag in the shape of a spool loaded with gold strands to further emphasize the craftsmanship behind these pieces, which, when combined with the pared-down runway atmosphere, seem more couture than ready-to-wear. 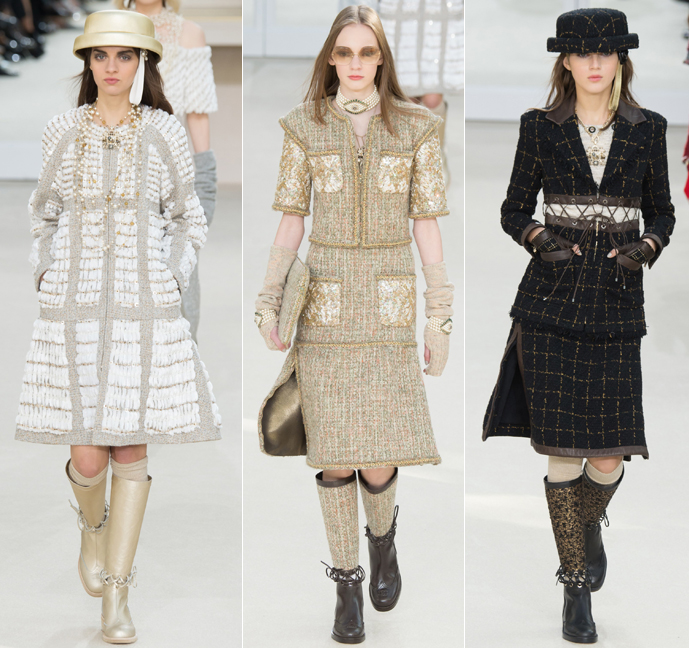 Of course, this isn't the first time Chanel highlighted gold in a collection (see the pre-fall 2012 collection as well as the fall 2014 and spring 2016 couture collections, just to name a few examples), but once again Lagerfeld has given new life to this shiny staple.  It's a bit more subtle than in seasons past, even though it made its way onto nearly every item.  With the exception of a couple dresses, bags and boots, I felt like I had to look closely to see the glints of gold peeking out along hems, buried in a pair of gloves or crinkled in a skirt.  Gold was a detail and yet it wasn't; it was incorporated into almost every piece but in a whisper more than a shout.  I also think the fact that the gold weave was interspersed within a relatively neutral color palette of ivory, white, beige and black also makes it seem more understated. 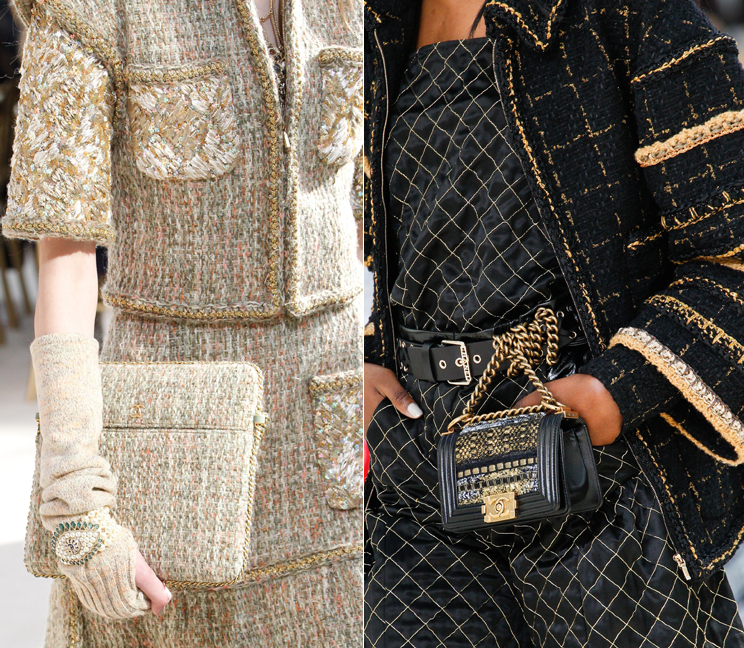 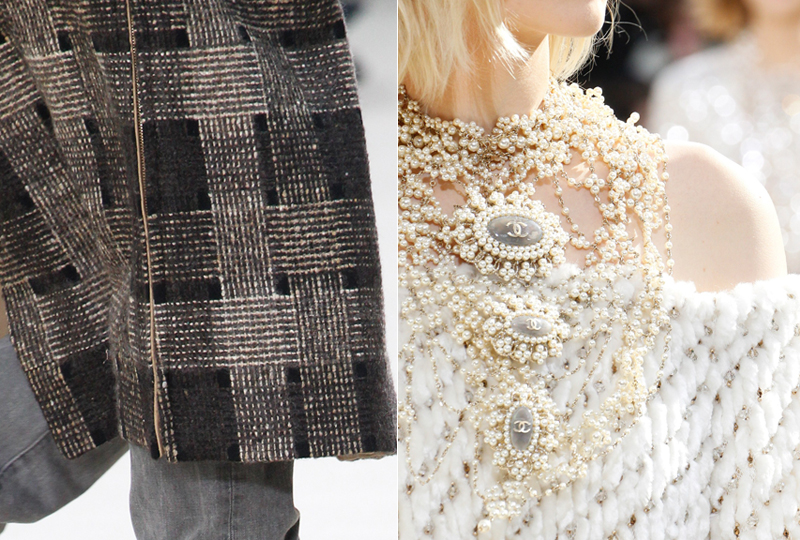 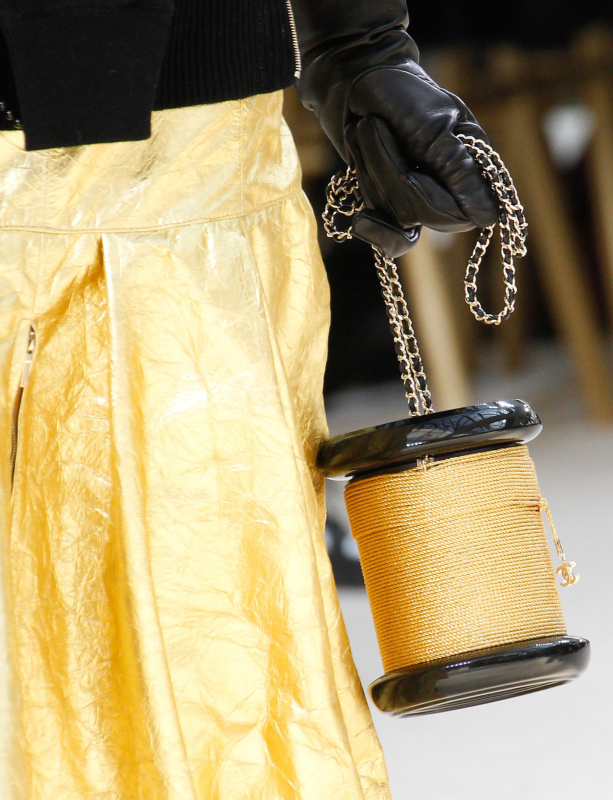 My favorite piece from the runway, and I think the one that most resembles the palette, is this beautiful column dress. 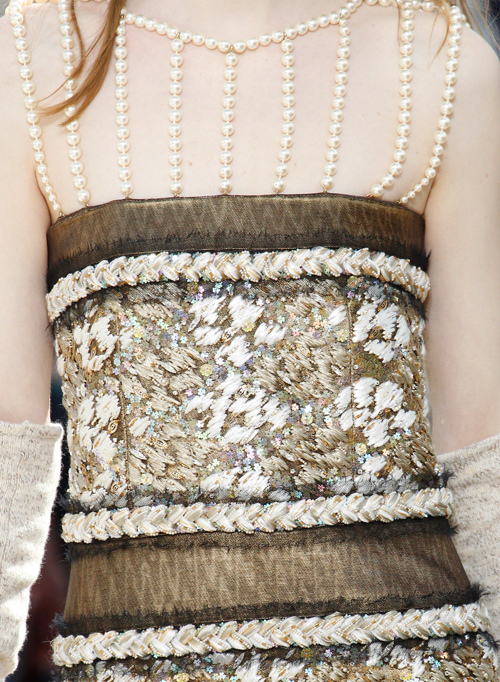 As you can see, it's not an exact replica of the patterns, but the various colors and textures neatly stacked on top of each other is similar to the palette's design.

Overall, as you might have guessed, I'm pretty in love with this palette.  It's easily the best one Chanel has come out with in about 2 years (this is the last one I was truly wowed by), and it was well-timed - who doesn't want some bling for the holidays?  As for fabric-esque makeup, I don't think anyone does it better than Chanel.  Dior, YSL, Armani, Burberry, et. al. have all come up with some wonderful runway-inspired palettes, but in terms of ones that actually look like fabric, Chanel has the market cornered.  (See the Museum's Woven exhibition for more fabric-themed items - I'd love to re-do it and include Ombres Lamées!)  Oh, and a word about purchasing this beauty: I was told by Chanel.com that the palette wouldn't be released in the U.S. so in my panicked state I ordered from Bonbon Cosmetics, but as usual Chanel's customer service was wrong - the palette will be available on the Chanel website starting November 28.  I saw a notice at Refinery29 yesterday and received an email directly from Chanel this morning notifying me that it's coming, so we have confirmation it will be stateside shortly.  The email also said, however, that it will be available in "limited quantities" so if you want it don't wait!

Do you plan on picking it up?  Any other thoughts?