It's almost Halloween, so in keeping with the spirit I thought I'd share some sweet and spooky items I've come across.  Hopefully you'll enjoy this mix of vintage and new makeup ephemera.  However, I must warn that if you're a plushie aficionado like me, you may not be able to sleep after seeing some very bizarre vintage stuffed animals.

We'll start with the good stuff.  I've loved this vintage Pum-kin Rouge since I spotted it at the IPBA website a while back, and a recent Instagram post by the Glamourologist jogged my memory.   Pum-kin Rouge, a blush that was meant to be flattering on all complexions, was first introduced in 1922 by the Owl Drug Company.  In an effort to stay competitive with ever-popular French-sounding brands, in 1925 Owl Drug began marketing Pum-kin Rouge under the Darnée Perfumer name.  You can read the entire Owl Drug story, which is divided into two parts, over at the excellent Collecting Vintage Compacts blog. 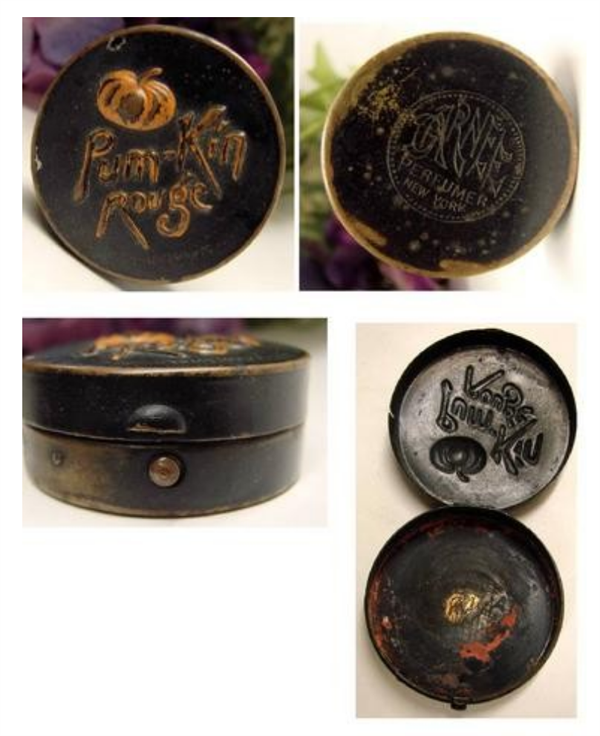 Even more rare than the round Pum-kin Rouge tin is this octagonal compact with a different pumpkin design, which appeared around 1928.  You can barely make it out in the photo below, but if you look closely you can see a woman's profile in the middle of the pumpkin.  So cool! 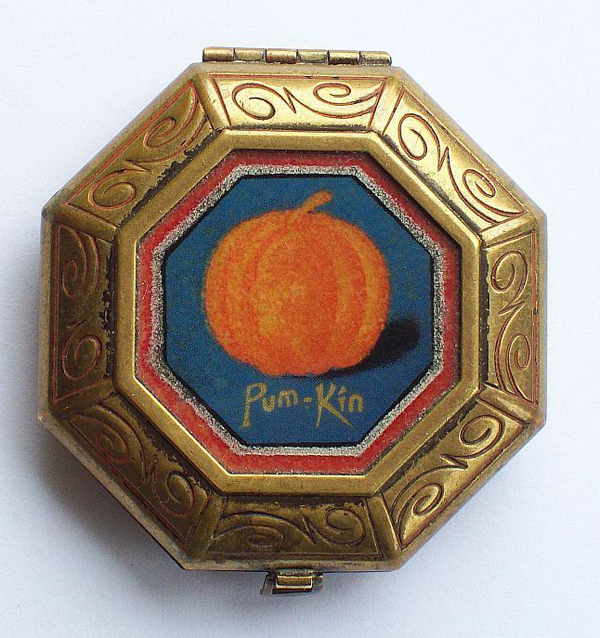 In terms of contemporary pieces, I admired these Halloween-themed highlighters from Etsy seller Bitter Lace Beauty.  (You may recall that this is the same company responsible for the rainbow highlighter frenzy.)  I didn't purchase them because I'm not sure how much I really want to branch into indie companies in terms of collecting for the Museum, but they're pretty cute. 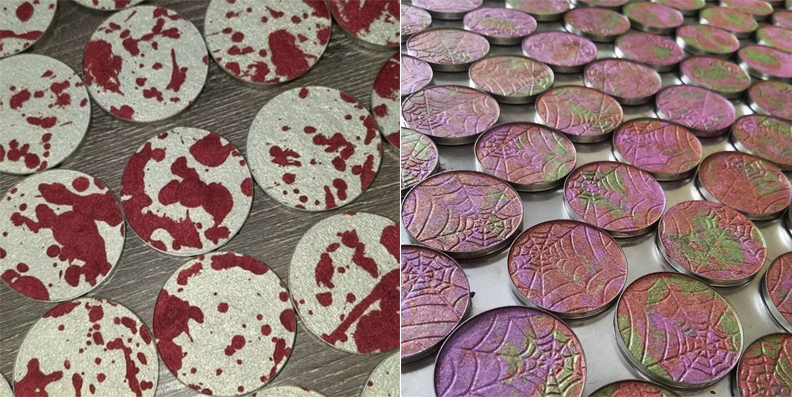 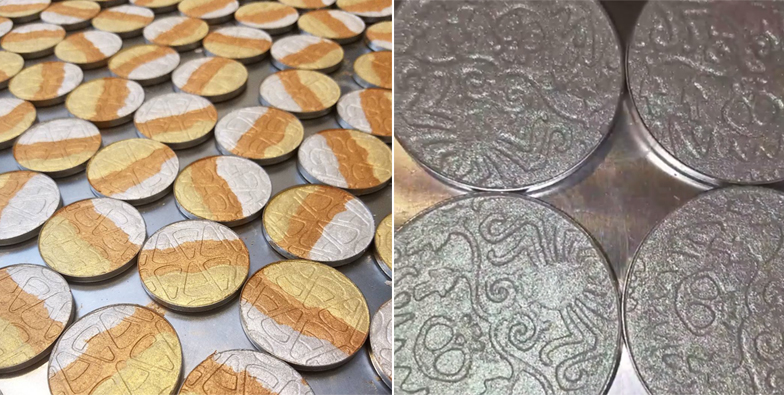 There were also these adorable coffin packages containing highlighters and glitter eye shadows from ColourPop.  Alas, they were only available to one lucky winner of a Halloween giveaway, not for sale to the public.  It's a shame, I would have snapped these up in a minute. 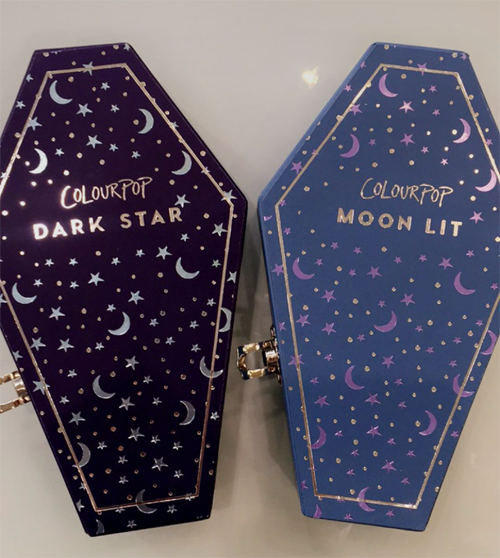 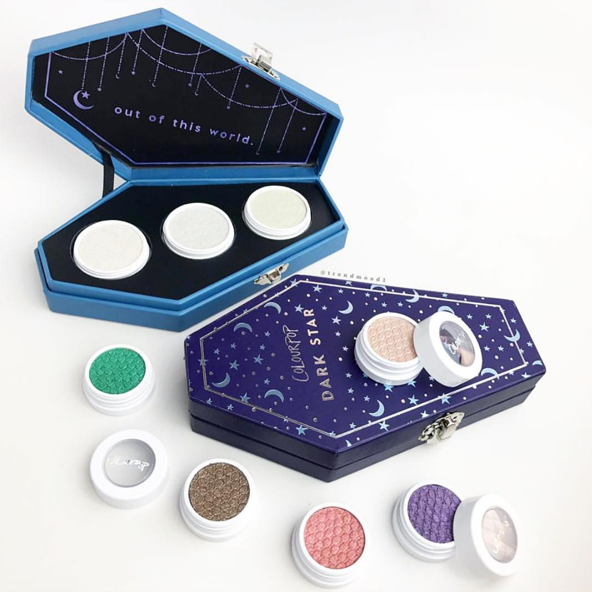 (images from bustle.com and @colourpopcosmetics.com)

Now we're moving on to the very strange and scary items I found, all of which are vintage.  You may want to get some towels to sit on in case you soil yourself.  Okay, maybe they're not that bad but I have to say, if I found any of these at a vintage shop or flea market I'd hightail it out of there real fast.

First up is this super weird lip-shaped box.  It's listed as a powder box on Ebay, but it looks more like a trinket box rather than something cosmetic.  Still, since it's lip-shaped maybe it was intended for makeup.  So while I'm not certain of its original purpose, I do know that it really freaks me out.  This isn't comical like Charlotte Tilbury's new Pocket Pout (which honestly reminds me of those goofy novelty wax lips and/or Mrs. Potato Head), it's just creepy as hell. 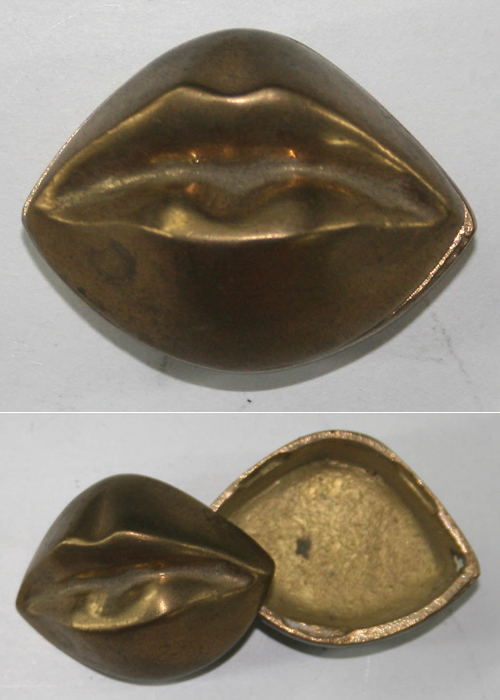 I nearly jumped out of my chair when I saw this pop up in my Ebay search for vintage compacts.  Do you know who this character is? (I didn't but thought he was absolutely the most horrifying thing I've ever seen on a compact). 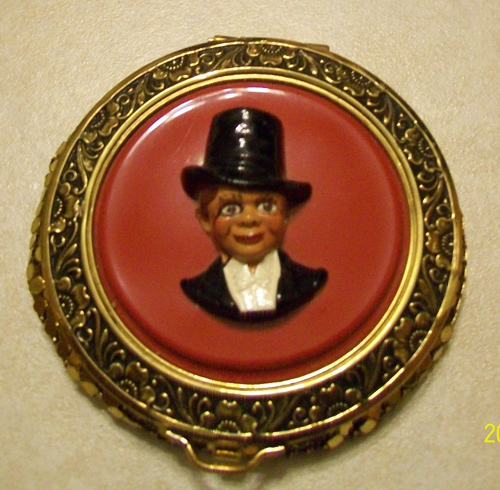 If you said Charlie McCarthy, the doll companion of '30s-'40s-era ventriloquist Edgar Bergen, you are correct.  If you said "Why the hell is some terrifying dummy on a makeup compact?", that's also an acceptable response.  It's actually a pretty remarkable likeness, which makes it all the scarier.  *shudder* 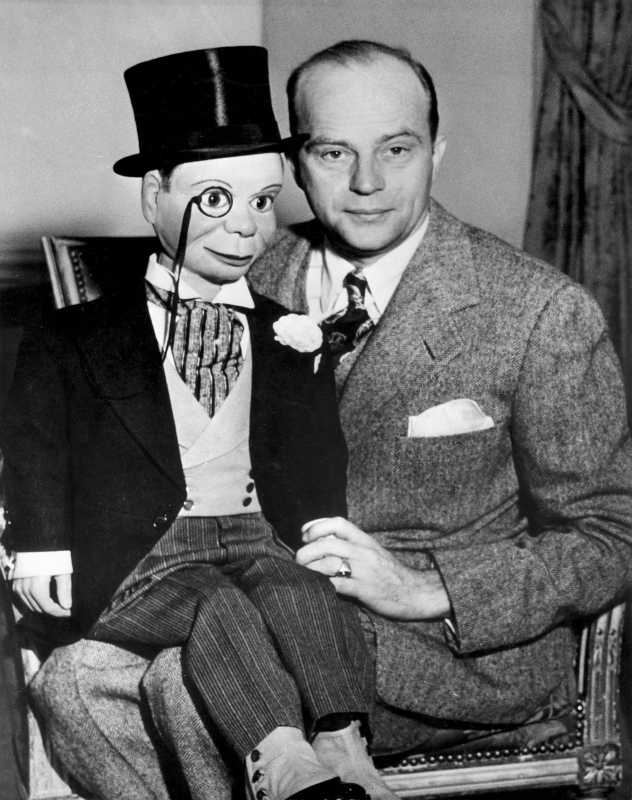 Also disturbing is that the asking price of another one I found is $199.95.  I'm sorry, but who would pay that amount to have this evil thing staring back at you?

I saved the most frightening items for last* - hopefully they won't leave you with nightmares.  If violence against plushies upsets you, don't finish reading!

Searching for vintage compacts on Rubylane, I came across this little monkey.  He's got kind of a scary face that reminds me of the original cover for Stephen King's Skeleton Crew.  But whatever, he's makeup-related so it's probably okay, right? And then I saw the next photo. 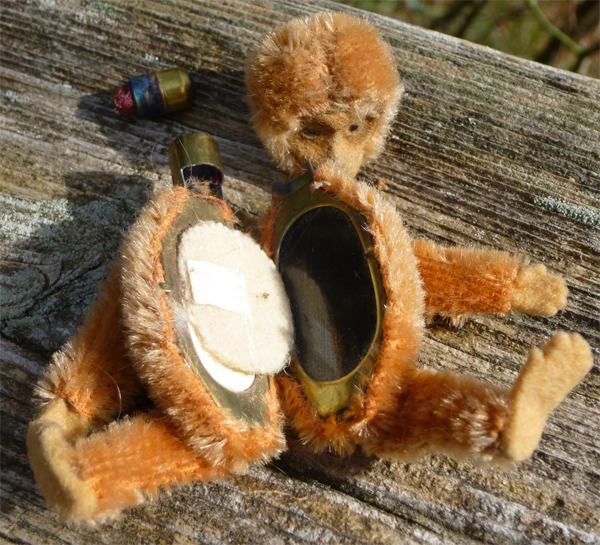 My approximate reactions (bonus points if you can name the horror movies these are from):

Apparently there was a German toy company named Schuco that produced these abominations in the 1930s (insert Nazi joke here.) These are stuffed animals that one essentially mutilated to reach the makeup hidden inside.  They came in a variety of colors and critters, with a powder compact shoved in the tummy and a lipstick in the neck.  :( 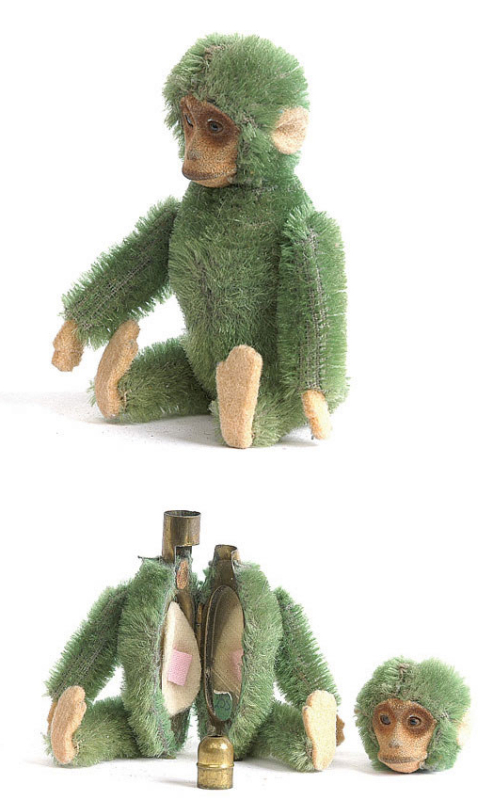 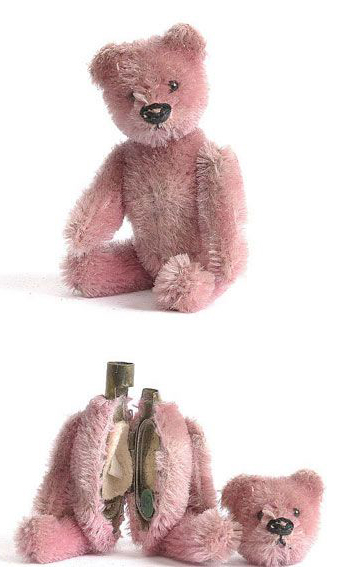 If the sadist makeup-user preferred, they could also tear the shell off a turtle or gut a dog, cat or duck.  Their faces look so unhappy to me, what with their downturned mouths and lifeless eyes - could it be because their innards had to get brutally ripped apart every time someone wanted to powder their nose? 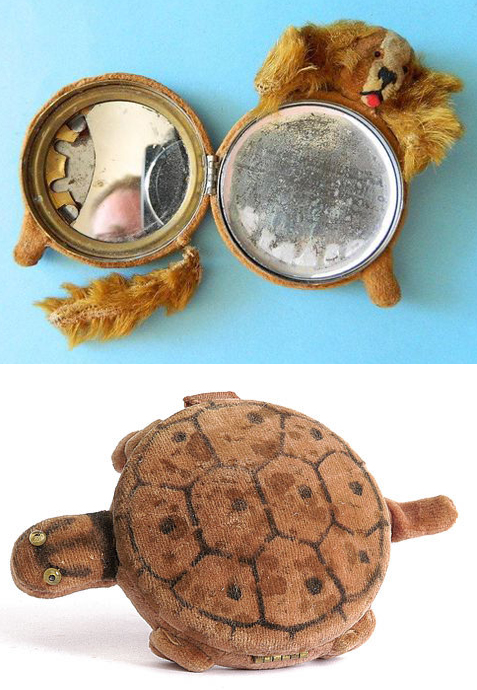 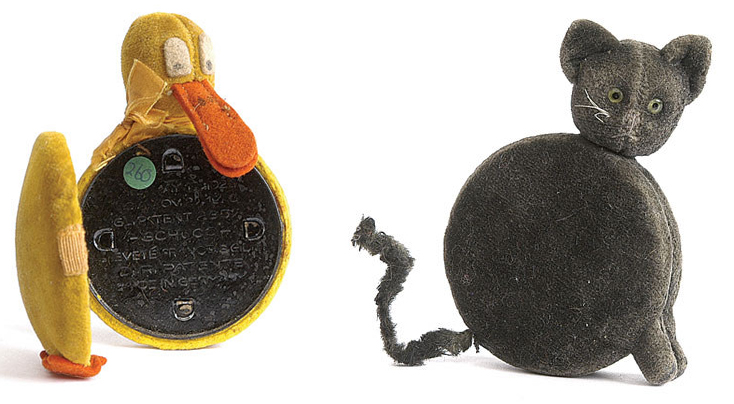 Of course, you could always choose to "only" yank the head off to access your favorite perfume rather than both decapitation and disembowelment.

I don't know, maybe it's because I have an unnatural affection for plushies, but these upset me to my core.  I really can't tolerate seeing their little bodies split apart like this, not even for makeup.  It's just wrong!  Plushies should not be dismembered for any reason.  As with the Charlie McCarthy compact, I'm also astonished at the prices.  Granted, these stuffed animals are somewhat unique and Schuco is well-known enough to fetch a nice sum, but $300??  This is one of those pieces where I know, rationally, that it would be an important item to have in the Museum's collection, but my heart says absolutely not.

Anyway, if you're not scarred for life please tell me which of the fun picks you liked most and which of the scary ones most haunted you.

*I did come across this gun-shaped compact, but ultimately decided not to include it as I realized my post was turning into a political rant.