This post is a result of my very kind mother-in-law gifting me some vintage DuBarry items, which she found while cleaning out her deceased mother's belongings.  She knew I would appreciate them and give them a good home, and I'm really pleased to have vintage makeup that came from a family member.  I'm okay with buying vintage items without knowing anything about who they belonged to, but obviously I feel more of a connection to the object when they come from someone I actually know.   Anyway, these items inspired me to learn a little more about the DuBarry line and, of course, purchase some other items so they didn't feel so alone. ;)

I'm not going to rehash the entire history of the line, as both Cosmetics and Skin and Collecting Vintage Compacts have excellent, thorough histories of both DuBarry and Richard Hudnut, the founder of the line (along with many other brands.)  The story in a nutshell:  DuBarry originally started as a fragrance developed by Hudnut in 1902.  In 1929 a makeup and skincare line was spun off the fragrance as an additional revenue source.  The line wasn't doing so well by the late 1930s; however, ever the businessman, Hudnut expanded his lucrative "Success School" (a charm school to prepare young debutantes for their coming out events) to include a new DuBarry "Success Course" that borrowed many of the same principles but without the debutante focus.  Part fat camp, part beauty and fashion tips, the Success Course earned the company over $4 million in a little over 3 years.  Not only was it a major money-maker, the course also helped the DuBarry makeup line gain significant brand recognition.  Since the 1960s the company passed through many owners but is still being sold today.

Without further ado, let's take a peek at some notable DuBarry items from their golden age (roughly 1940s-60s).  I found this beautiful fan-shaped color guide over at the Baltimore Shoeseum, an online museum that  specializes in swing era artifacts.  Let's hear it for another Baltimore-based online museum!  I'm sort of tempted to call and ask if they'd be willing to deaccession it to me, as I think the Makeup Museum would be a better fit.  ;)  I think this is from the early '30s. 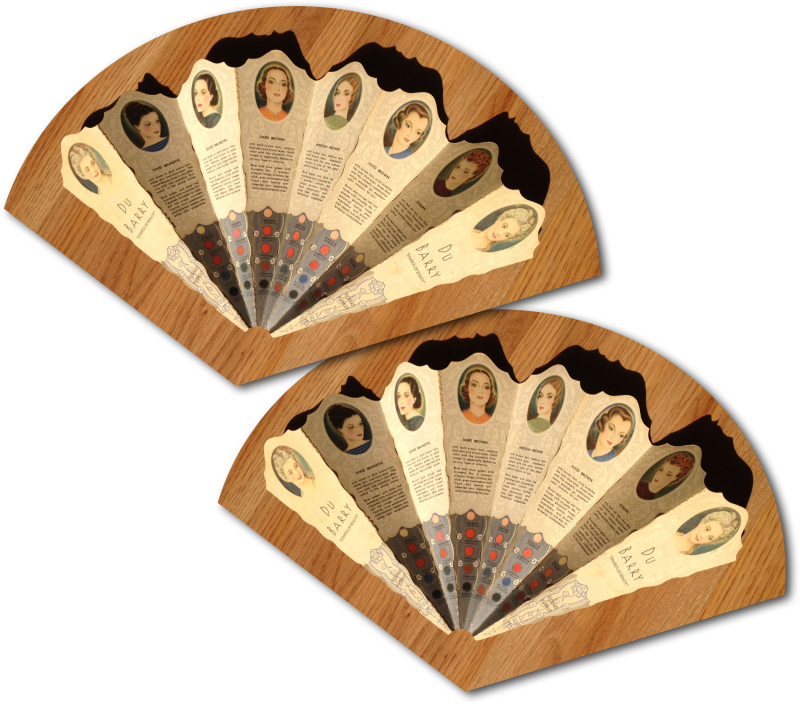 But what DuBarry was particularly known for was the use of an image of Madame du Barry, a.k.a. the last mistress of Louis XV who, along with rival Marie Antoinette, lost her head in 1793. Collecting Vintage Compacts' entry notes that Hudnut named the line after Madame du Barry, but I'm curious to know what the source is on that and why Hudnut chose her.  In any case, there is no fabled tale of how Hudnut arrived at using Madame du Barry as inspiration the way there was with Harriet Hubbard Ayer's Madame Recamier skincare.  And it shows:  the company came up with vague likenesses of Madame du Barry for the product packaging rather than borrowing a real portrait.

The powder box below looks quite early and also resembles this etching. 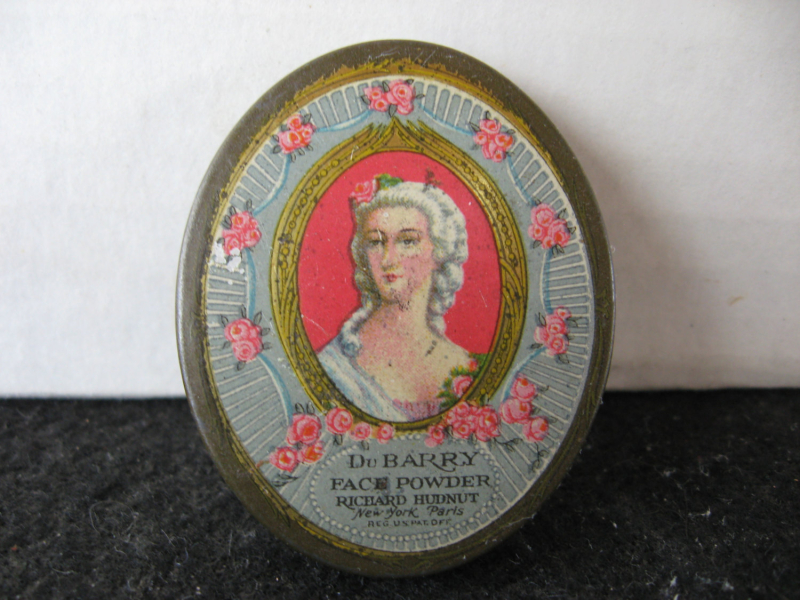 This box also appears to be very early and is somewhat similar to this portrait.  These two boxes are the only ones I've seen with these particular designs, so I wonder if they were samples or prototypes not actually put into mass production. 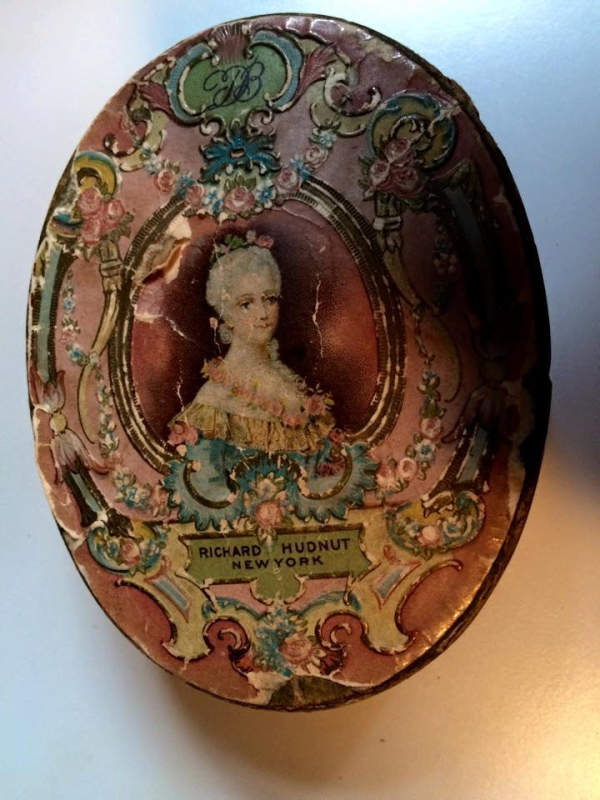 The only exception to DuBarry's lack of faithful reproductions of the Comtesse was a sketch of a sculpture by Augustin Pajou. 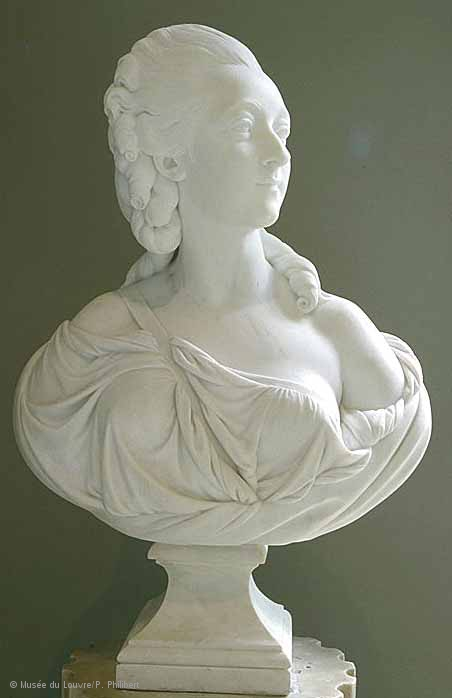 Roughly from the start of the line in 1929, DuBarry utilized a drawing of the sculpture for ads and powder boxes and continued to use it up until the early to mid '40s. 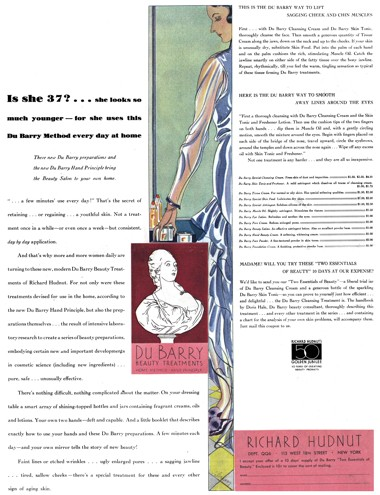 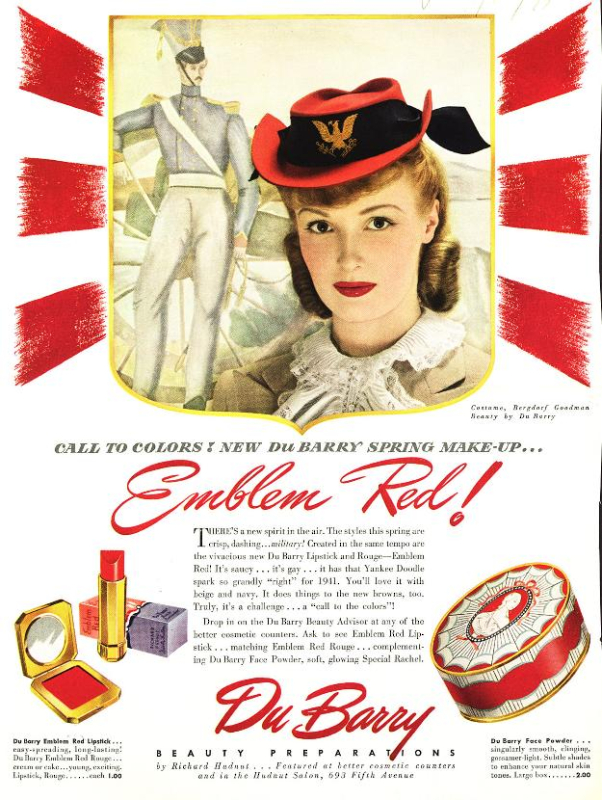 Naturally I had to get one to add to the Museum's collection. 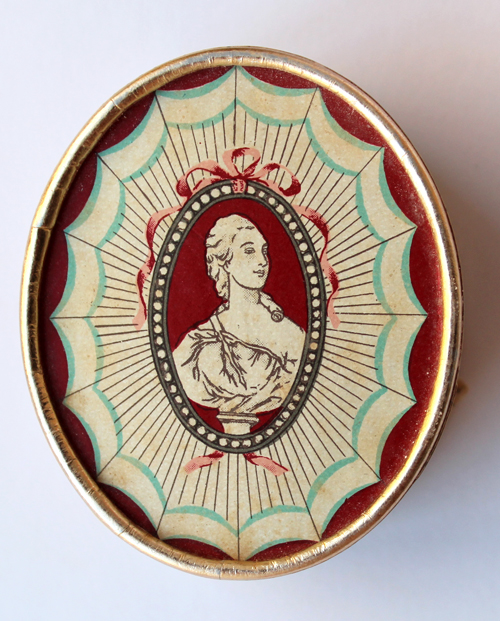 Okay, maybe I got 2!  But the design was a little different and I figured variety couldn't hurt. 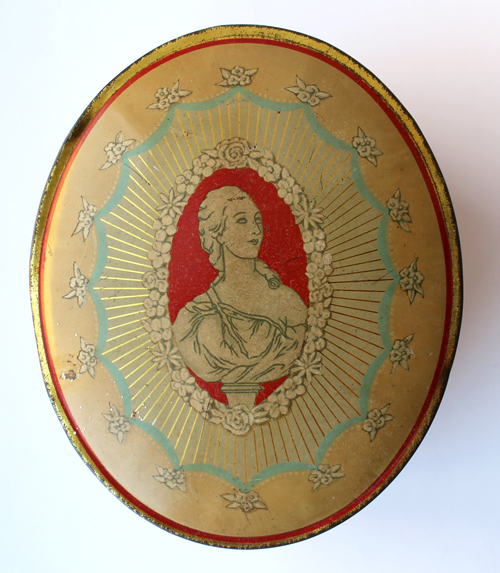 I also liked the pattern on the sides. 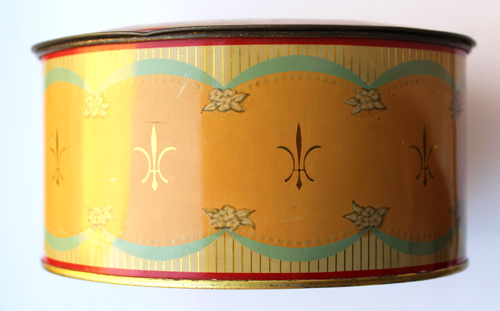 Just to give you a sense of the size, that 2nd box is body powder and way bigger than the face powder pox. 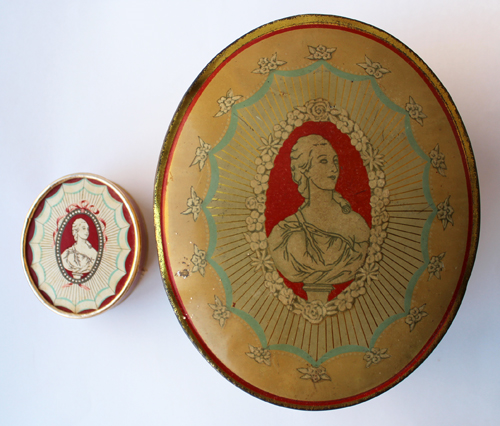 But starting around 1935 (at least according to the ad below), DuBarry displayed a different, completely imaginary representation of Madame du Barry, and it appears that in 1942 they began adding her to their packaging and phasing out the other, accurate Madame du Barry depiction.  I've looked everywhere online and there is no portrait of Madame du Barry that even remotely resembles this one. 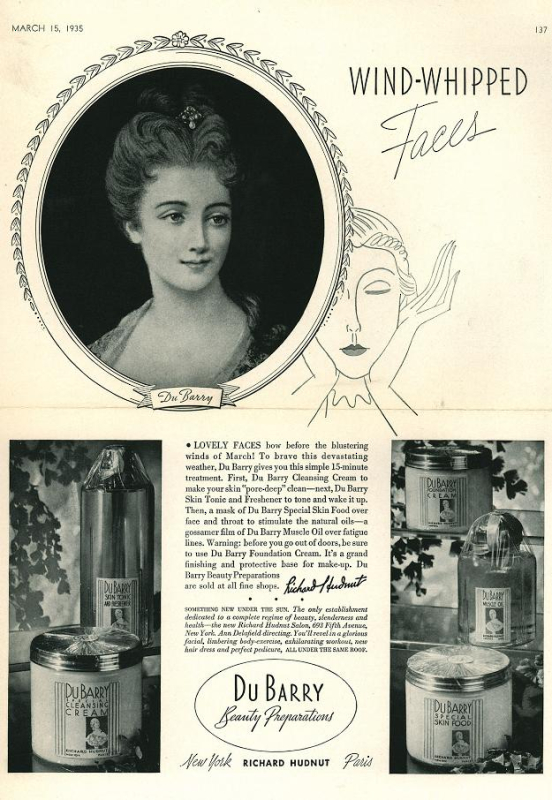 It appears to be an amalgam of the Pajou sculpture (the asymmetrical, drapey neckline), this 1770 portrait by François-Hubert Drouais (hair is up with one lone curl around the neck), and this 1771 portrait, also by Drouais (hairstyle is similar, although DuBarry seems to have swapped out the blue ribbon for a blue jewel on the packaging).  You can see, however, that the woman on the box is not a direct copy of any portrait, as was the case with the Pajou sculpture. 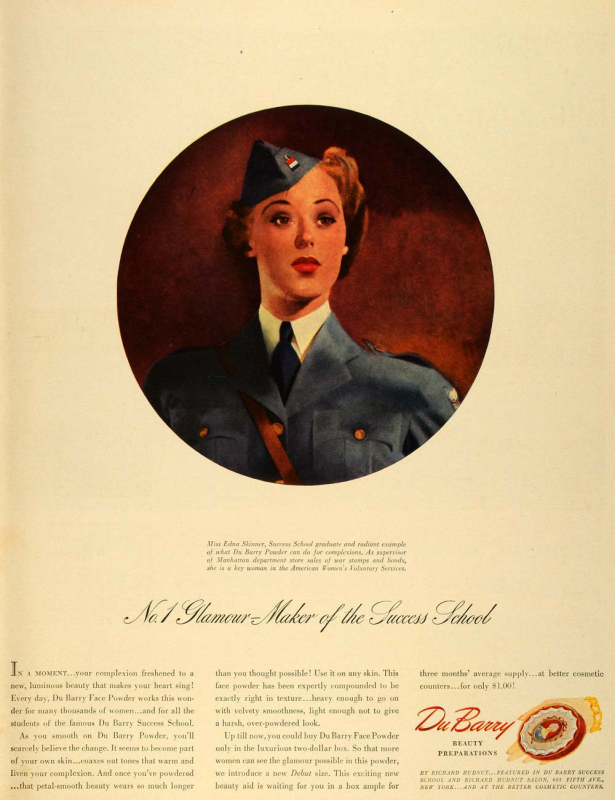 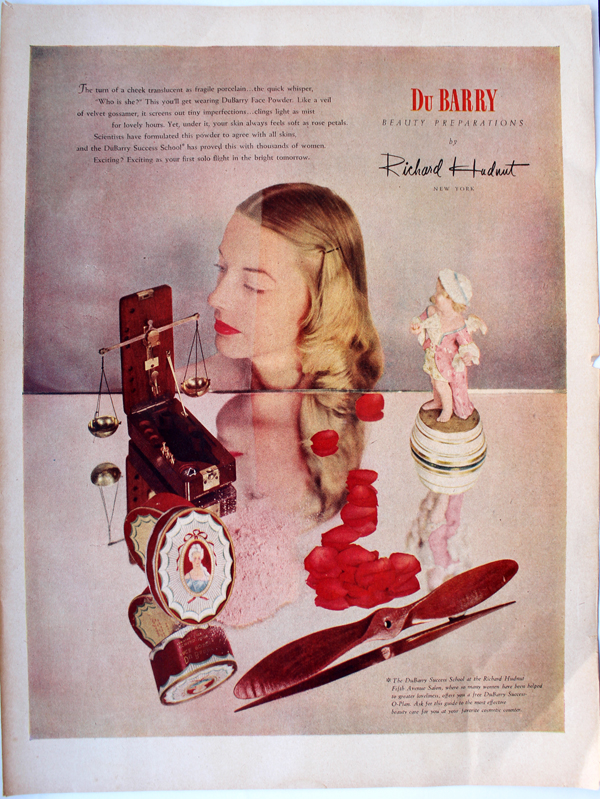 I bought this one too, along with the ad above. :) 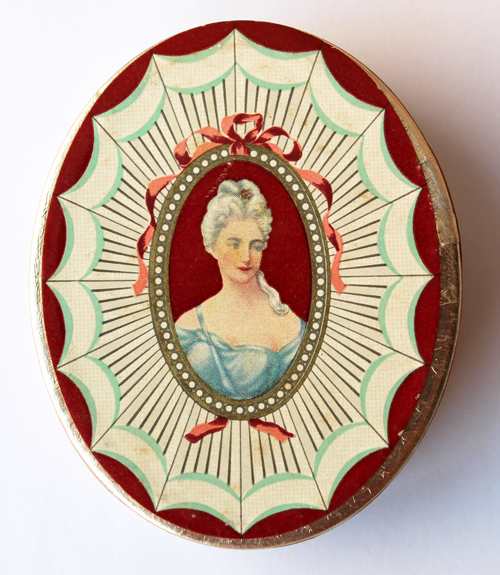 Then in 1949 DuBarry changed the likeness on the packaging yet again.  This time Madame du Barry appears with the ridiculously high powdered wig hairstyle that we associate with the French Revolution era.  Again, as far as I could tell, there is no portrait of Madame  du Barry that resembles this - here's the closest one I found - but even the face on this DuBarry packaging looks nothing like her! This image was used through the mid 1950s. 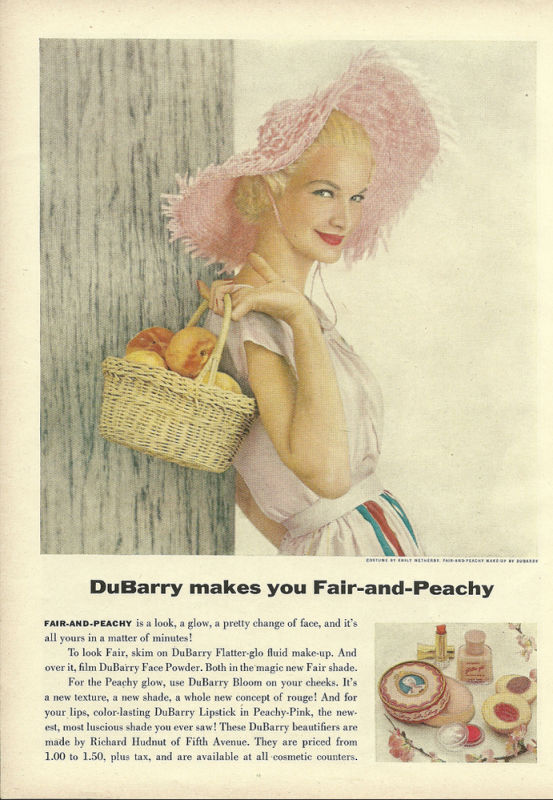 To round out the Madame du Barry representations I had to get this one too.  This is probably the most common DuBarry box I came across. 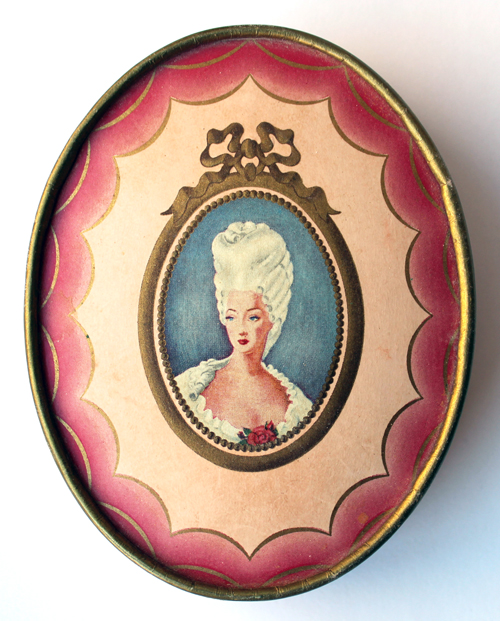 The next item I thought would be a nice addition to the Museum's DuBarry holdings were these lipstick blotting sheets.  Clearly men are the only ones who are affected by lipstick transfer and it's their comfort we have to worry about most, not the simple fact that women would just like a lipstick that stays put so we're not constantly touching up. *eyeroll*  Still, I thought it was amusing that they put a cartoon man on the case and I don't have any vintage lipstick blotters in the Museum's collection.  (And like the DuBarry powder boxes it was super cheap, which is always a plus.) 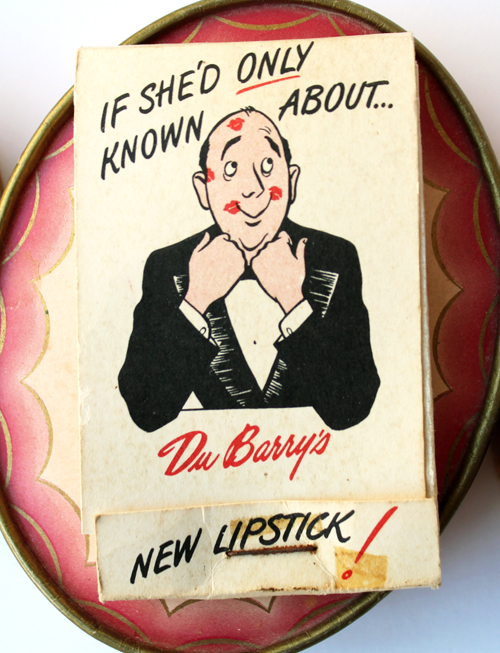 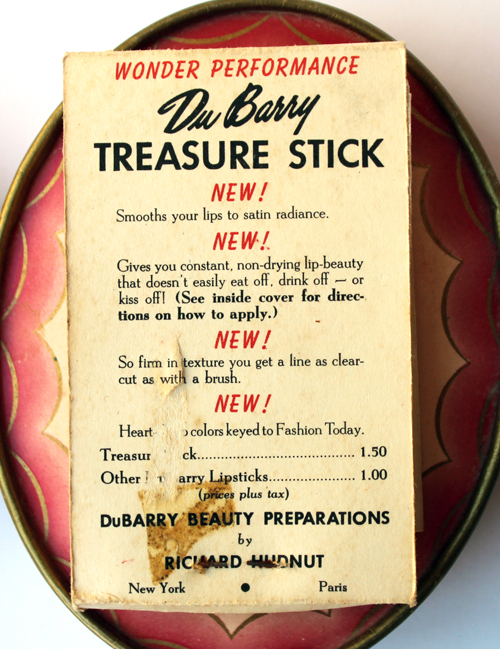 Based on the graphics I really thought this was from the early '60s, but I was way off.  Turns out DuBarry's "Treasure Stick" lipstick was introduced in 1947 and was sold at least through 1951, according to the ads below, so these blotting sheets are from around then as well. 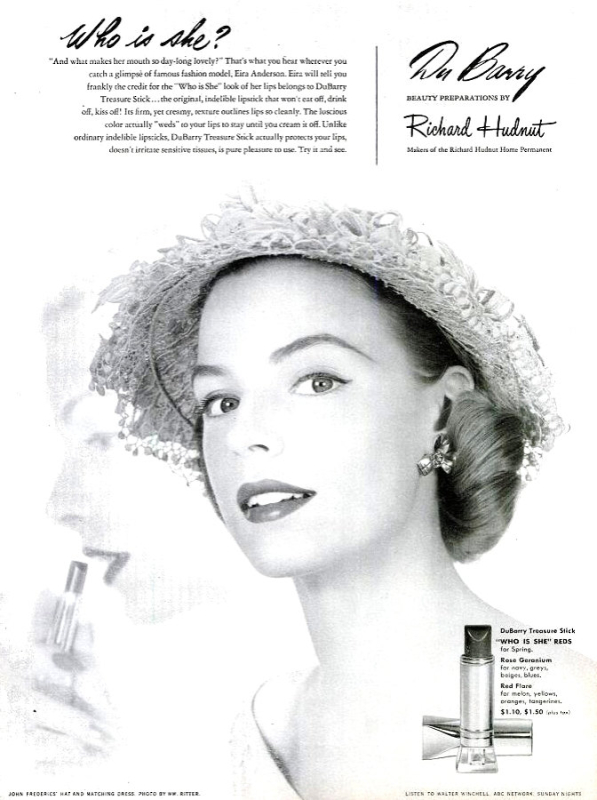 Finally, here are the items that once belonged to the husband's grandmother which my mother-in-law kindly passed along to me.  Thanks, M.! 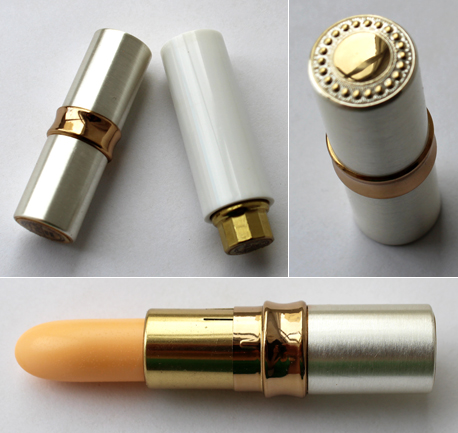 Naturally I was eager to find out approximately when they were from.  Just at first glance they appeared to be early '60s to me, but I couldn't say so with any certainty, so off I went to search for clues.  Based on the ads below it didn't look like the lipsticks I have are from the '40s. 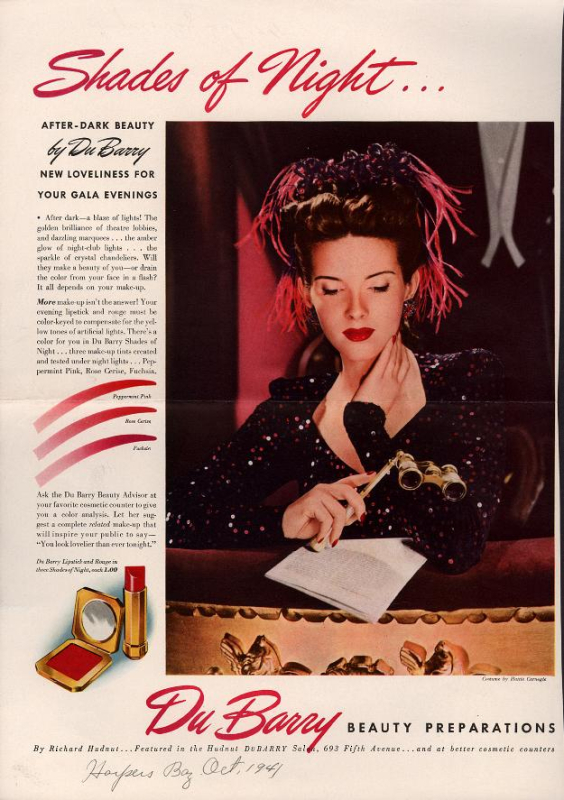 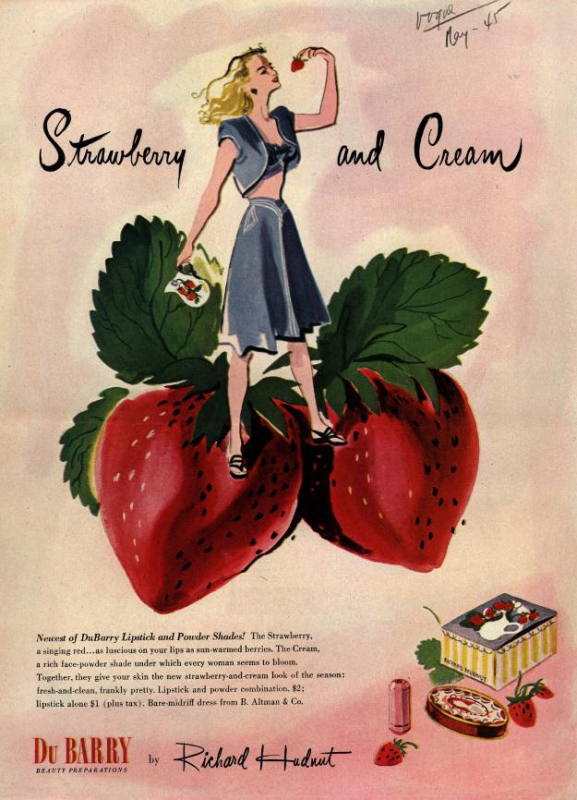 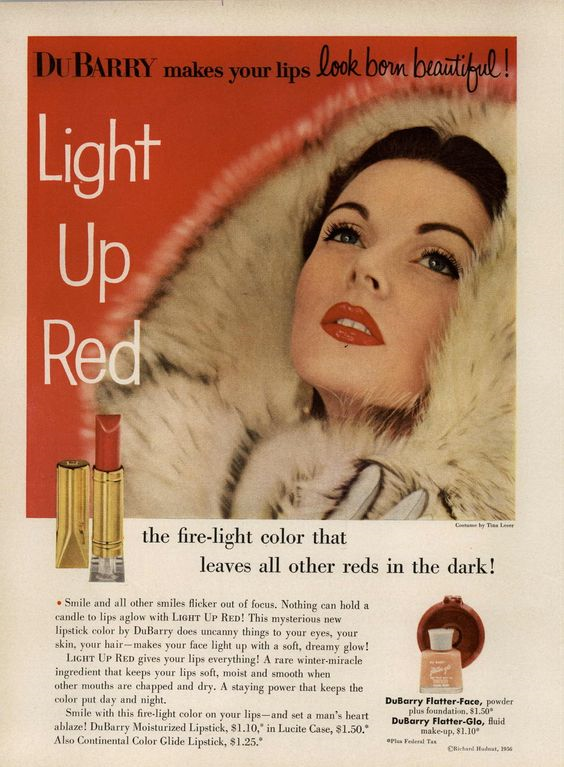 Low and behold, in 1958 we see a new lipstick tube and bullet that are very similar to those bestowed upon the Museum.  With the debut of the "Royal" lipstick (you've seen this ad before), there also came a new case.  However, it's gold-toned and not silver like the ones I have.  Hmmm... 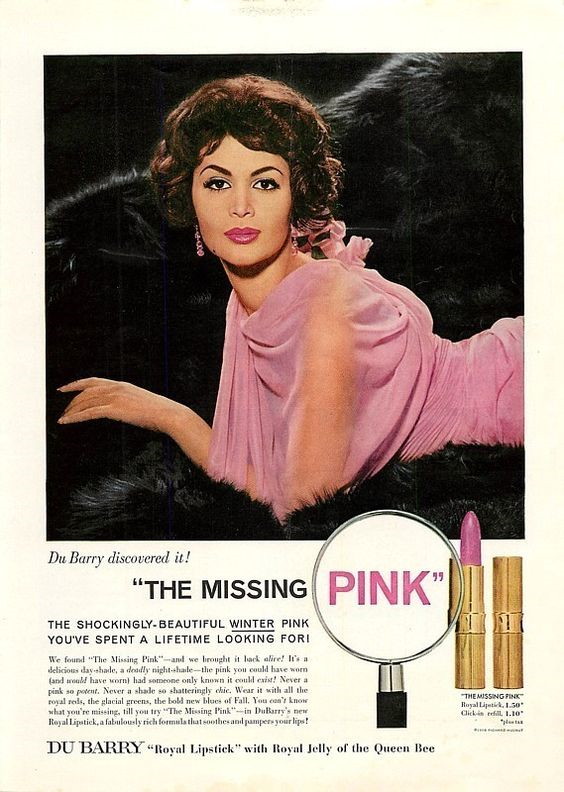 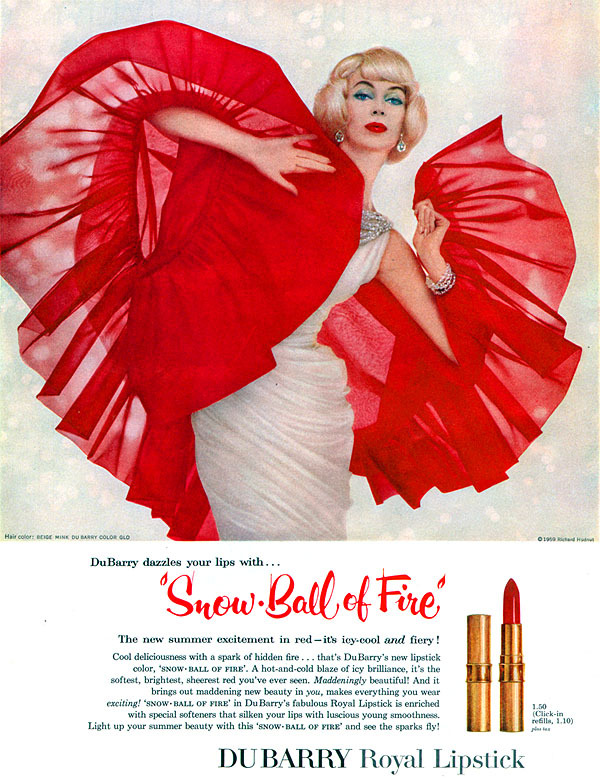 It's hard to tell, but judging from this 1961 ad below, it looks like DuBarry made the switch to the silver casing by then. 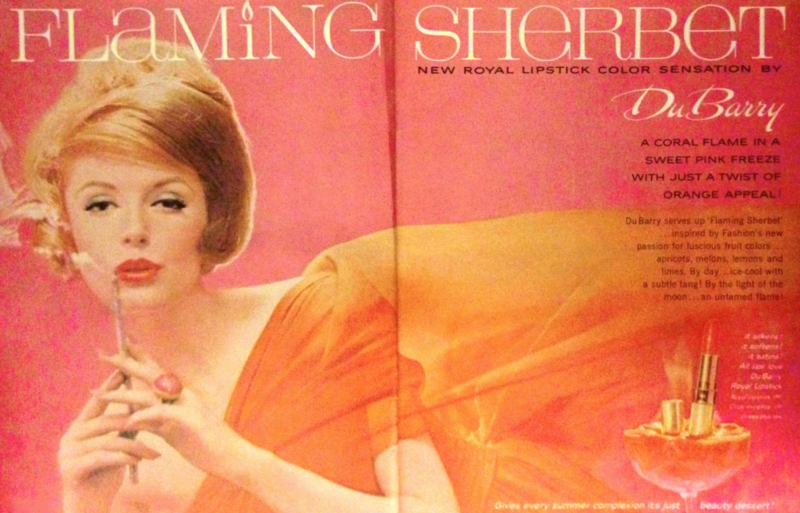 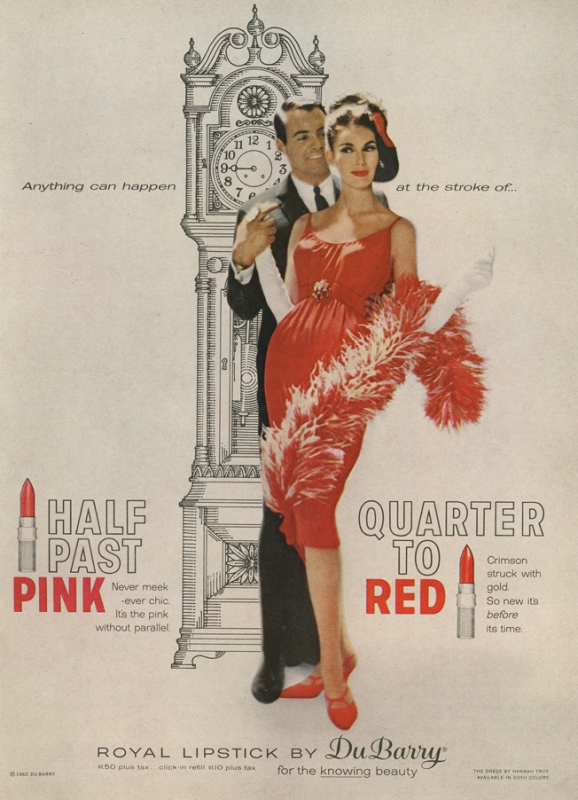 So while I'm still not 100% sure, I can say with confidence that the lipsticks I was given date from the late '50s or early '60s, especially given that the prices are the same on the refill boxes and in the ads.

Just for fun, how cute is this "Morning Noon and Night" set?  Now that would be quite a find! 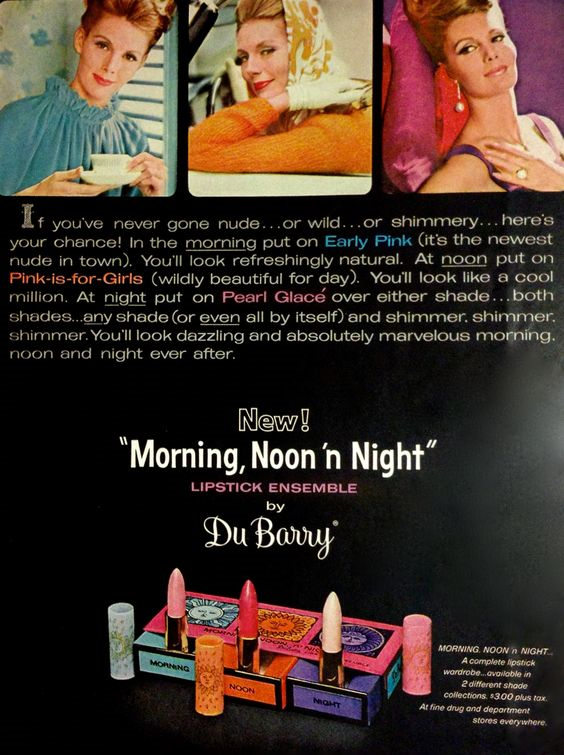 DuBarry went on to launch a pretty interesting campaign for their Glissando range starting in 1964 - at least, from an advertising point of view.  Since there were so many ads I simply couldn't narrow it down, but they were a good representation of mid to late '60s style.  As noted earlier, the brand changed hands several times over the years but is still around today.  I kind of wish they would look to their golden age and re-introduce packaging with an updated (and accurate) depiction of Madame du Barry.  As Collecting Vintage Compacts points out, the Comtesse's consumer appeal cannot be denied:  "[The DuBarry] fragrance could not have failed to be recognized by the buying public as representing the essence of feminine beauty, intrigue and even a hint of scandal."  Indeed, I can see many people buying makeup with the King's favorite adorning the packaging.  :)

So those are some highlights from DuBarry when they were in their prime.   Which ones did you like best?