I was browsing Sephora online, as I do nearly every day, and spotted a brand called Sweat Cosmetics.  Their tagline is "developed by athletes for active women," and apparently the brand is the brainchild of 5 Olympic athletes.  However, my gut reaction upon seeing this at Sephora was, we're supposed to wear makeup while we work out?  Naming a cosmetics brand Sweat seems to imply that we're expected to look good even while exercising.  While the brand's description insists that "Sweat empowers women and embraces beauty" I can't help but be mildly annoyed.  I couldn't quite put my finger on why and decided to do a little more investigating.  Turns out, makeup designed to be worn during exercise has been trending pretty strongly in the past 5 years or so.  Long-wear, waterproof and sweat-proof makeup are nothing new, of course, but I am intrigued by the recent uptick in brands that produce makeup specifically for working out.  And by intrigued I mean I'm not sure whether this is a step forward or backward for women.

A few months prior to Sweat's launch, in early 2016 beautybox subscription service Birchbox announced an in-house beauty line called Arrow Cosmetics.  According to this article, Arrow consists of "makeup, skincare and body products that are lightweight, long-wearing and refreshing - designed to enhance natural beauty during (and after) physical activity."  In 2015, British brand Eyeko released their "sport" eye products, a waterproof mascara and eyeliner, and the same year Bobbi Brown introduced her #LONGWEARLIFEPROOF campaign, in which 4 professional female athletes - an Olympic skiier, an Olympic snowboarder, a world record holding base jumper and a professional surfer - used GoPro cameras to record their workouts while wearing the brand's long-wear eye products to demonstrate they could withstand the most extreme activity.  Bobbi Brown's executive director of global communications Alexis Rodiguez told Advertising Age, "[The] idea is if these athletes can use these products and push their limits, it's essentially life-proof for all women."

Going slightly further back, in spring 2013 Tarte collaborated with famed synchronized swimming group Aqualillies to create a truly waterproof makeup line featuring a dizzying array of products that would hold up through hours of swimming.  Later that year Katherine Cosmetics was launched. Founded by Katherine "Annie" Finch, the brand offers a collection called K-sport, a "lifestyle solution-driven collection of compact beauty products designed for active, women-on-the-go, living real life." (Interestingly, from time to time the brand highlights a professional athlete to be their "K-sport girl".  Currently it's a golfer...I'd be curious to see how these K-sport products perform for, say, a marathoner.)  Even as far back as 2005 the notion of makeup made just for exercising in existed with the founding of Rae Cosmetics, a line of mineral cosmetics "specifically created for women with active lifestyles...created to take the heat, like the women who wear it". 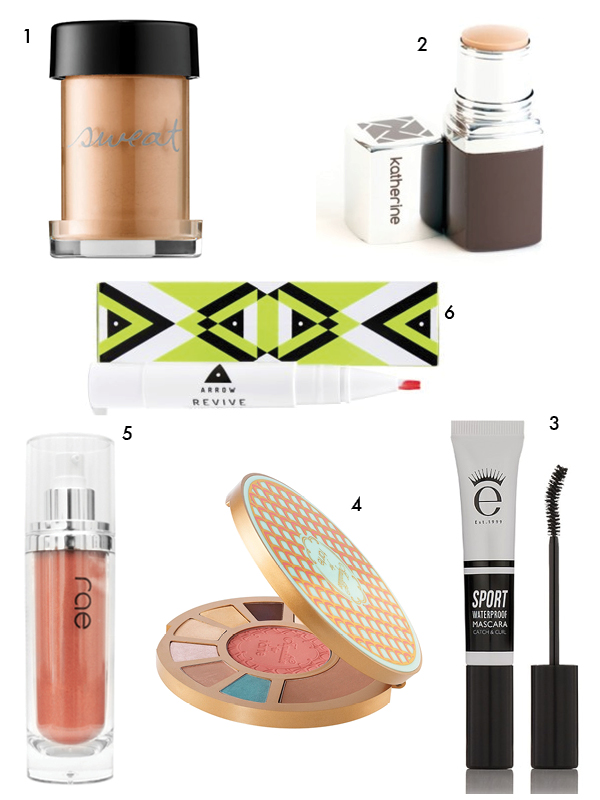 While not directly falling under the category of active beauty, there has also been a small increase in athletic-themed makeup.  Sonia Kashuk's Knockout face powder from this past spring was embossed with a boxing glove, while Kiko introduced their Beauty Games collection this summer in honor of the summer 2016 Olympics.  And MAC's upcoming It's a Strike collection features a bowling ball-emblazoned highlighter.  Even though these are, at their core, beauty-centered items, I find it interesting that their design is more sports-inspired than we've seen previously. 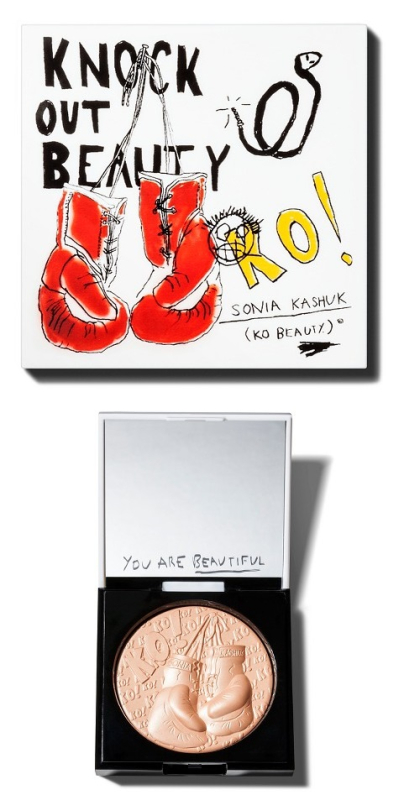 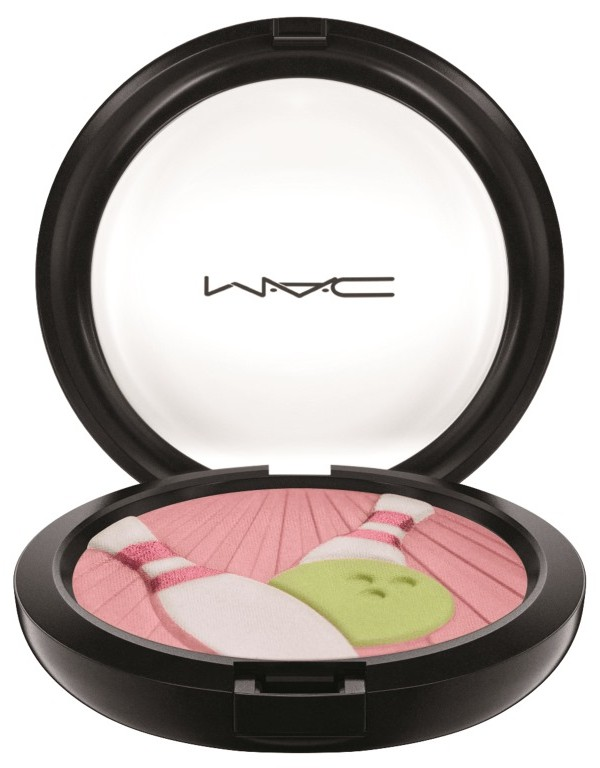 Finally, there was also a fairly unique collaboration between Reebok and Face Stockholm.  While the output was sneakers and not beauty products, it's still interesting to see a cosmetics line partnering with an athletic-wear company. So what's causing this seemingly newfangled intersection of makeup and physical activity?  One of the factors may be the athleisure trend in fashion.  Beauty and fashion are always closely intertwined, so active beauty may be the cosmetic equivalent of the laid-back yet still tailored clothing one can wear while doing yoga, running errands, or even social occasions.  Notes Katia Beauchamp, co-founder and CEO of Birchbox, about the new Arrow line, "We were inspired by the trend of athleisure in fashion, and felt that the same elements could apply to beauty—high-performance products that help you look your best, without looking like you are trying too hard. It's that effortless, ready-for-anything beauty that so many of us are often looking for...of course we loved that we could pioneer this concept in the beauty category and we worked hard to quickly bring the idea to market. The goal with ARROW is to provide subtle color and practical skincare and body products that make women feel fresh and confident wherever their busy days take them."  And Sweat Cosmetics has partnered with the grand poobah of athleisure, Lululemon, for special promotional events.  Indeed, as more women try to juggle fitness routines in ever-busier schedules, makeup that can transition seamlessly from one situation to another is becoming a staple.  As InStyle points out about the athleisure trend, "The need for everyday comfort, too, plays a role, especially for anyone trying to work fitness into an already overtaxed schedule. Who wants to haul an extra outfit to work?"  Along those lines, most women can't be bothered to switch out their makeup one or more times a day, and active beauty fulfills the demand for makeup expressly made for exercise.  According to a 2012 survey in the UK, 7 out of 10 women apply makeup before going to the gym, while Cosmo and the New York Times have both published guides on the best makeup for physical activity.  While I still say there are plenty of existing products out there that would stand up to hearty workouts, Sweat CEO Courtney Jones Louks insists, "We know first-hand that there have not been products created specifically for women who like to break a sweat.  We wanted to change that."

The second factor may be the increased attention paid to professional women athletes and their personal style.  The focus on elite female athletes is a double-edged sword, however:  while it's great that sports media is spending more air time reporting on women athletes, the other side of the coin is the never-ending commentary on, of course, the women's looks - something male athletes don't have to contend with.  In 2014 NBC skiing analyst Steve Porino received a considerable amount of backlash for his mention of female downhill skiers' makeup during the Sochi Olympics.  The responses were swift and furious; after all, would he have commented on, say, a male skier's hair gel?  And what does makeup have to do with athletic performance?  The two are not mutually exclusive.  Plus, one must keep in mind that while women athletes are getting slightly more media coverage, it's still very little compared to men's, and to make the most of it many feel pressured to wear cosmetics.  Claire Cohen explains in an article for the Telegraph, "The first thing to say, is there can be little doubt that sportswomen are, by and large, wearing more make-up – and are generally more concerned with their appearance – than ever before...with multi-million pound sponsorship deals on the table and high resolution photography uploaded to the internet before the medals have been awarded, it’s little wonder. These women know they have a couple of weeks to become household names, secure media exposure – not to mention funding for their next round of training. After all, less than five percent of air time is dedicated to women in sport – and there isn’t a single woman in the Forbes list of top 50 highest-earning athletes."  What's more, women athletes are penalized for wearing makeup; it's a lose-lose situation.  Wear makeup or else risk being passed over for those ever-important endorsement deals, but if you do wear makeup you're clearly not committed to your sport, or, even worse, your sport isn't a "real" sport.  A sample of Twitter comments regarding makeup-wearing athletes at the 2014 Sochi Olympics include the following:  "Sorry. But if you want us to take women’s basketball seriously, please lose the heavy makeup while playing. It’s sport. Not fashion." "If women can wear earrings and makeup while playing, I question the legitimacy of the sport... #curling #Olympics2014." And this little gem: "Sorry, if the women are wearing makeup it is not a sport."  The firestorm surrounding women athletes wearing makeup surfaced again in 2015 during the women's World Cup.  For the 2016 Olympics thus far, there's been a more positive view, at least among the competitors themselves who note that they wear makeup mostly for the reason many of us do: self-expression.  So perhaps the active beauty trend is simply another response to the sexism faced by elite women athletes, as it may be perceived as a deliberate attempt to declare, once and for all, that wearing makeup while exerting oneself physically is not only totally acceptable but can even be celebrated.  As this article on the aforementioned Bobbi Brown campaign notes, "[In] giving the athletes an opportunity and platform to share their stories, the campaign also aims to celebrate the idea that female athletes do indeed care about beauty and the role that makeup plays in further boosting their confidence."

I wholeheartedly agree that wearing makeup while exercising can improve confidence and should not be a source of shame. I myself applied tinted moisturizer, tinted lip balm and curled my lashes before a marathon, not because I wanted to look acceptable in photos - I knew it would be sweated off within 15 minutes of crossing the start line - but because I was incredibly nervous and the ritual of makeup application calms me down.  However, I am slightly wary of these newer brands that promote makeup specifically for exercise.  I don't wear a stitch of makeup to hit the gym, and when I got wind of the likes of Sweat, et.al., I thought, wait, is wearing makeup to the gym something I SHOULD be doing?  It's like I almost feel pressured or expected now to wear makeup to the one place I never do. Cosmetics have been created just for this occasion, so presumably there are tons of women now wearing it for their workouts.  Will I look even more disheveled and out of place at the gym now?  Is my entire being somehow wrong for skipping makeup at the gym?  These were the thoughts running through my head when I first laid eyes on Sweat.  Obviously I came to my senses and realized I absolutely don't have to wear makeup while working out - these brands are just providing options for those that do.  But the fact they made me question myself in the first place gave me pause.  (For the record, I don't care if I remain the only person on the planet who is bare-faced while working out - the amount I sweat, coupled with the fact that my face turns a shade of red no amount of foundation or concealer could ever cover, renders makeup completely pointless.)  On the other hand, perhaps these are simply filling a new need for the 21st-century woman, and also demonstrate that one can still embrace their femininity while pushing their physical limits.  As U.S. Olympic runner Shannon Rowbury says, “You can be a strong, athletic, courageous woman and you can wear lipstick...I like being able to be all those things or try to help inspire young women to be all those things. It doesn’t have to be one or the other."

What do you think of "active beauty"?  Do you wear makeup to work out?