It's kind of a moot point that these beautiful Shu cleansing oils slipped through my radar last year, as 1. they were Australia-exclusive and I had no way of purchasing them; and 2. they're technically hair products, so it's a bit outside the Museum's purview.  Still, they're pretty awesome looking so I wanted to share them anyway.

As the first installment of their Art Series, in May of 2015 Shu teamed up with 3 Australian artists to design 3 bottles for the brand's Cleansing Oil Shampoo.  The collection was released at a VIP event at Sydney's China Heights Gallery. 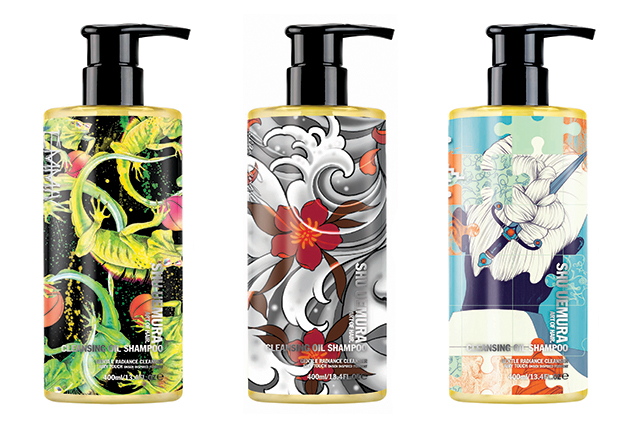 First up we have fashion designer Emma Mulholland, whose quirky, surf culture-inspired pieces are making her a favorite among the likes of Kanye West, Azealia Banks and Grimes.  Photos of her spring/summer 2015 collection, entitled "Risqué Business", adorned the walls of the gallery where the oils were being displayed. 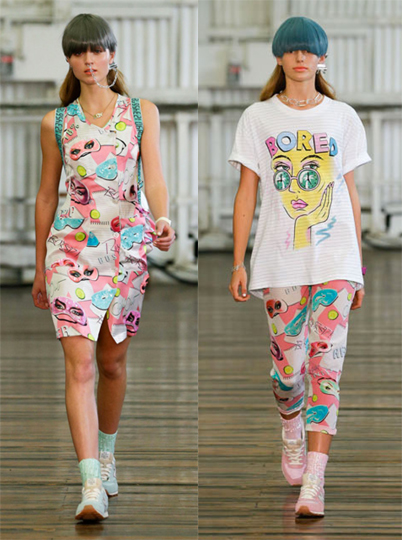 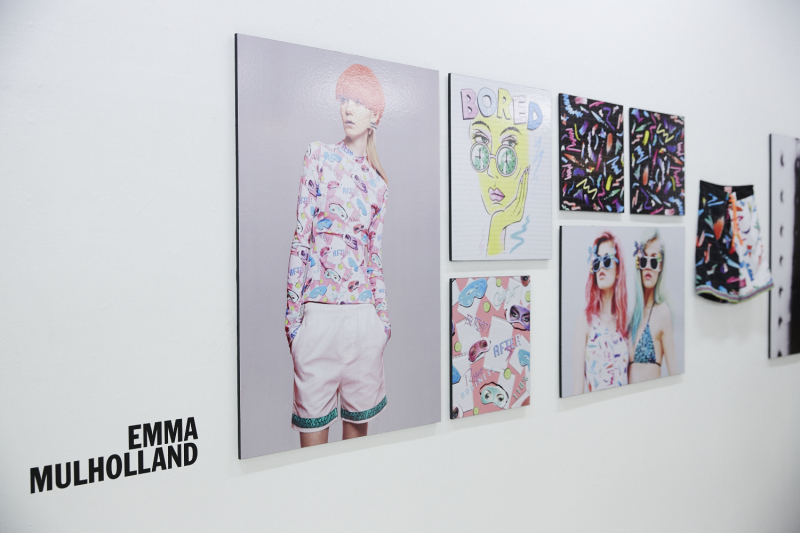 Mulholland, a graduate of Sydney's TAFE, made her solo debut at Australian Fashion Week in 2013 and cites '80s and '90s pop culture as her main sources of inspiration.  "I love pop culture and watching movies is one of my favourite ways to relax. I like movies from the 80s and 90s mainly so I’m always inspired by them, also a lot of bands and musicians from those times too," she says.  I can definitely see these  influences in her work, from the '80s pops of neon and geometric shapes to the '90s-esque platform sneakers and overall silhouettes. 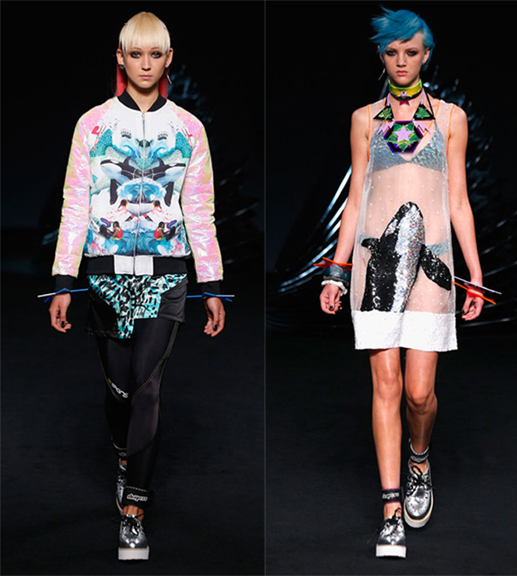 I'm particularly fond of her "Spaced Out" collection - it's an incredibly fun riff on the conspiracy theory that aliens built the Egyptian pyramids. 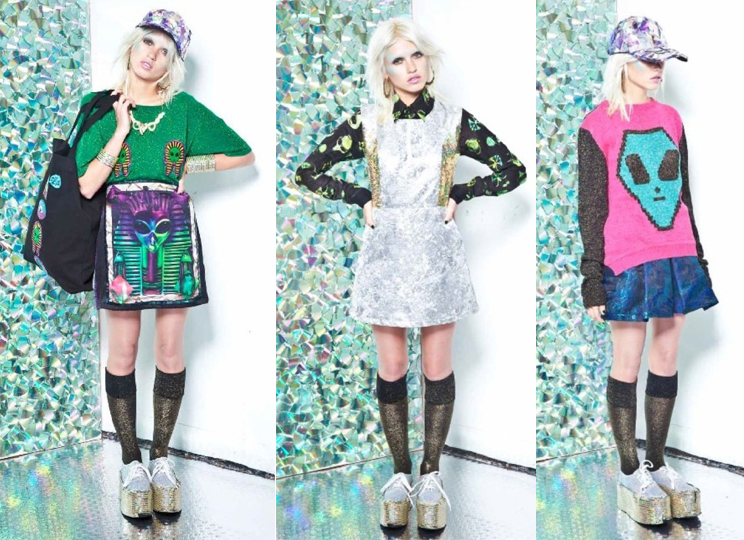 As for the Shu collab, Mulholland explains, "Shu Uemura got in contact with me about the Art Series and it sounded like a really exciting project so I jumped at the opportunity to work with them. It was great because I got to look back through my archive prints and work with them on choosing one that would work for the bottle. [It's] a print from one of my very first collections ‘Bad as I Guana Be’. The theme was the Mexican desert but mixed with basketball—so that’s how it came about."  It's totally bizarre, so naturally I love it. 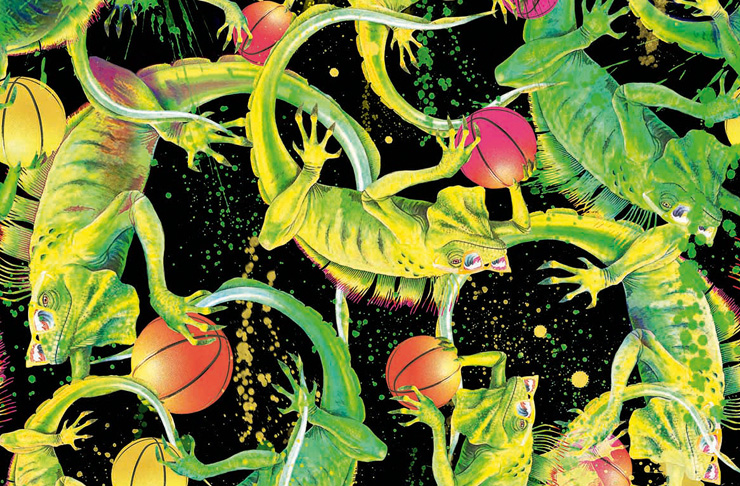 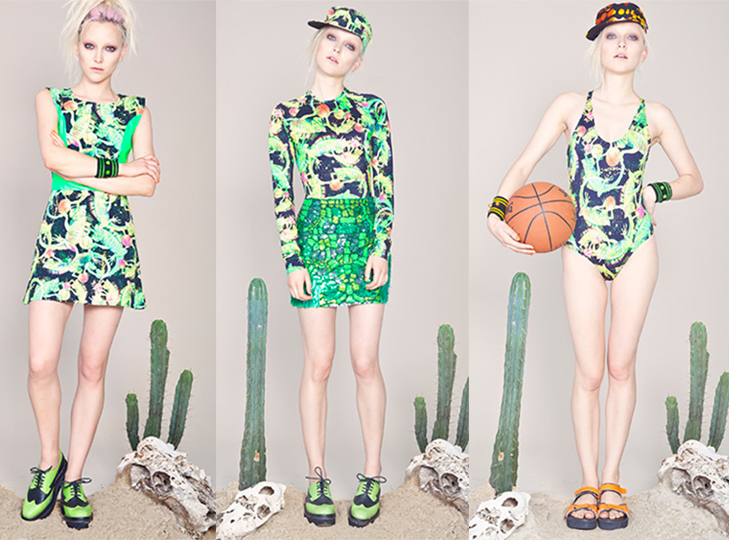 Next up we have tattoo artist Dean Carlyle.  I was unable to find any information on how the collaboration with Shu came about, or any other biographical information about him, but I think we get a good sense of his aesthetic just by looking at his tattoos.  Big, bold, traditional-style tattoos are his jam - none of the delicate, single-needle stuff we see so much of these days (although I must say I prefer the latter!)  These are definitely not for the faint of heart. 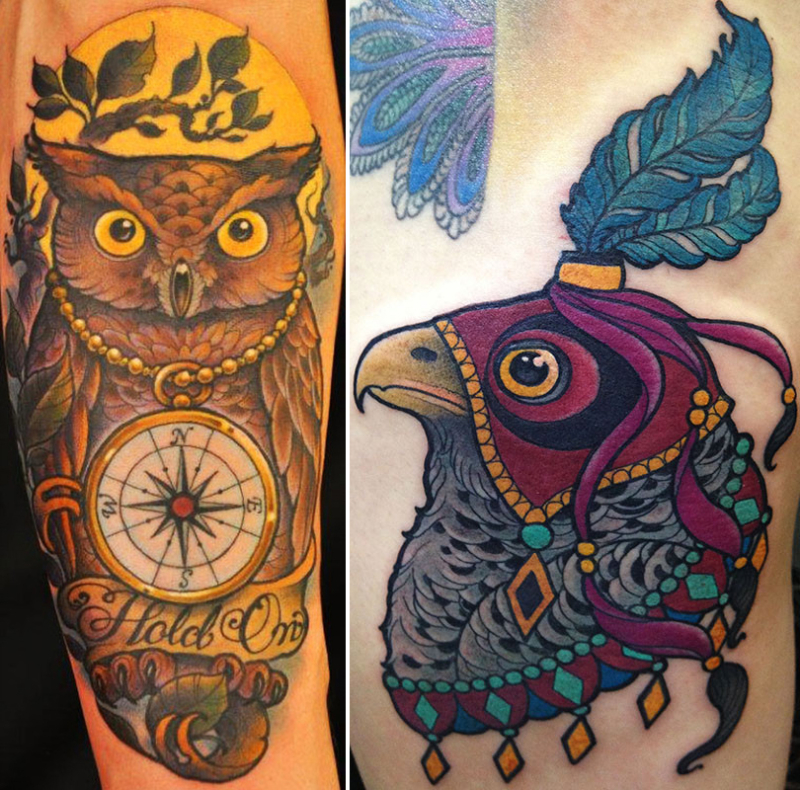 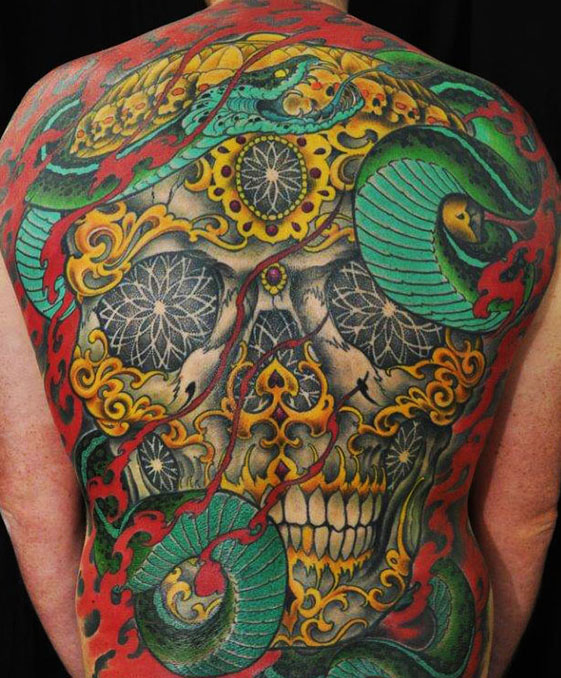 As for the Shu oil, you can see the rest of the illustration as it was installed in the gallery.  The stock photo of the bottle at the beginning of this post only gives a partial view of the fierce woman that wraps around the side and back of the bottle. 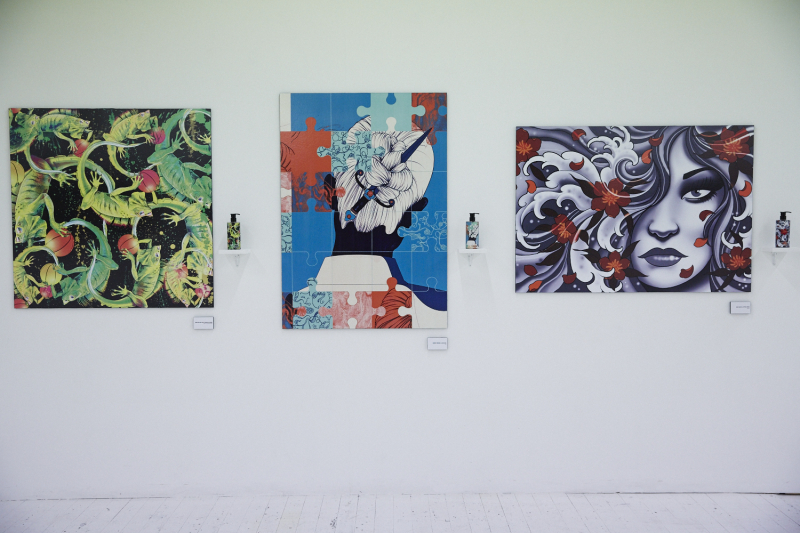 I think the design on the Shu oil is most reminiscent of these drawings by Carlyle. 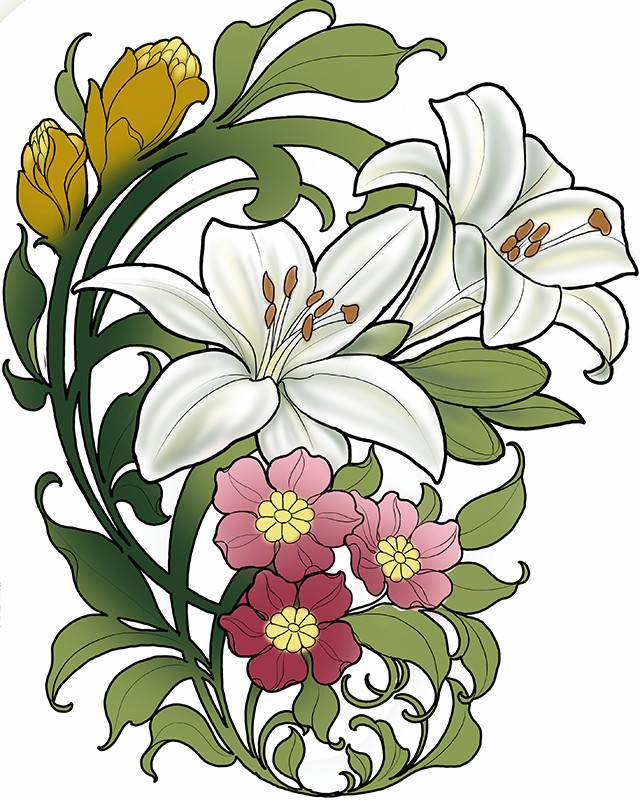 You can catch a peek of more of his work at the gallery. Finally, we have New Zealand-born, Melbourne-based illustrator Andrew Archer.  Originally trained as a graphic designer, Archer is influenced by woodblock prints and his stints living in Asia, which is readily apparent in his work.  Archer created a Japanese warrior-inspired design for the Shu collab.  I think this one best represents the product given its emphasis on the hairstyle. 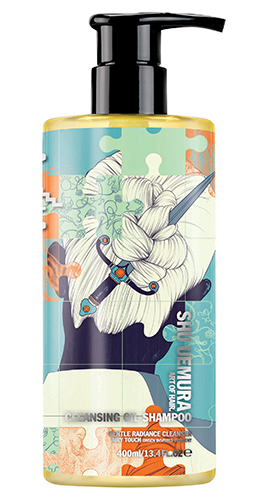 The Shu collab caught Archer a little off guard, but he was pleased with the end result.  He says, "I was initially curious as to why [Shu was] wanting my work specifically for the collaboration, most beauty brands play it pretty safe with their imagery and in contrast Shu Uemura wasn't at all shy about wanting to get something different, stylistic and contrasting incorporated into their brand. This was almost entirely what made me want to work with Shu Uemura - the chance to create something unique, and present something to a new audience who could join in the visual journey Shu Uemura and I created together." 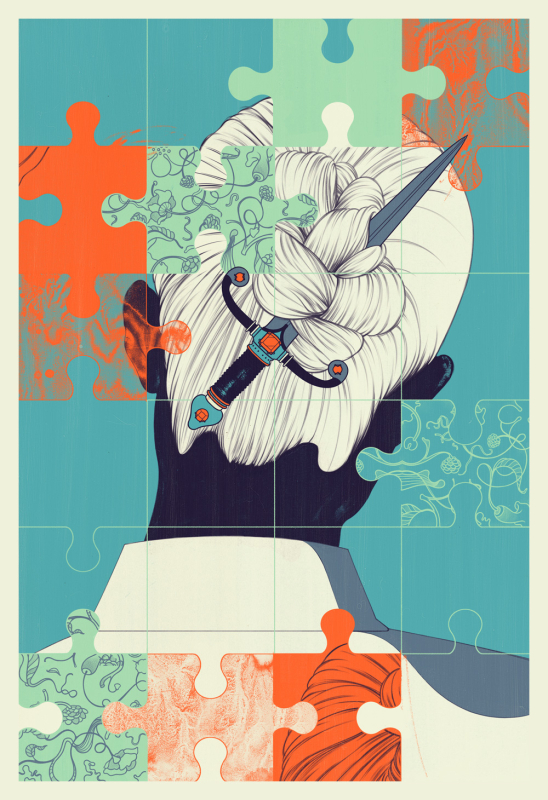 Archer describes his style as "free flowing, confident but quirky coloring and surreal," which we can see in these prints for the FIA Formula E racing championship series.  I also like how sharply Archer captured not only the cities in which the championships took place but also the speed and motion of the cars -  you can practically hear the "whoosh!" as they zoom by. 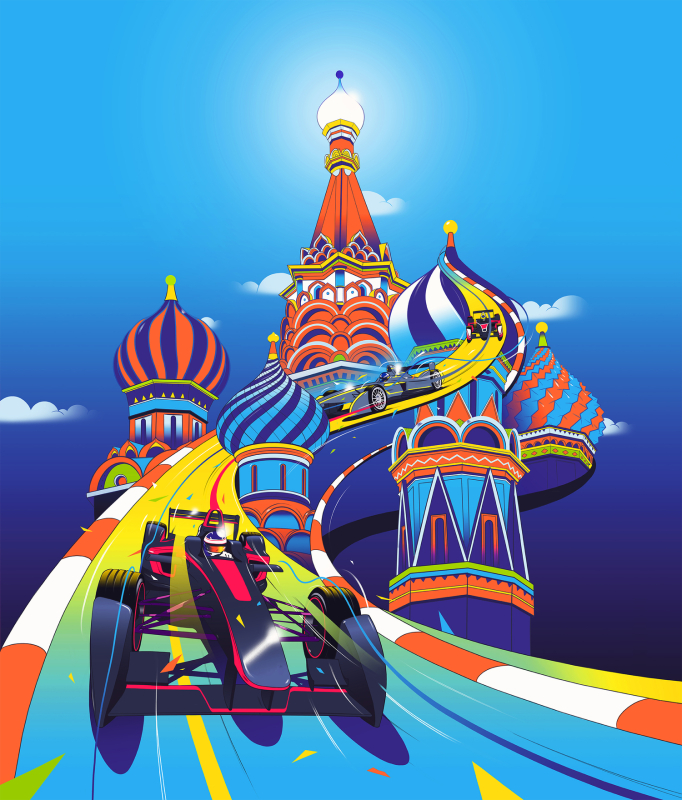 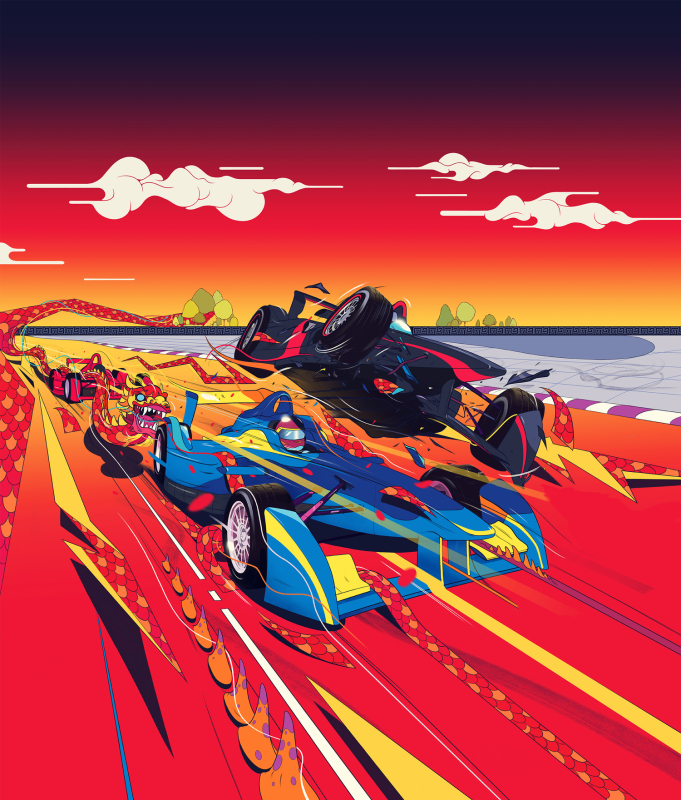 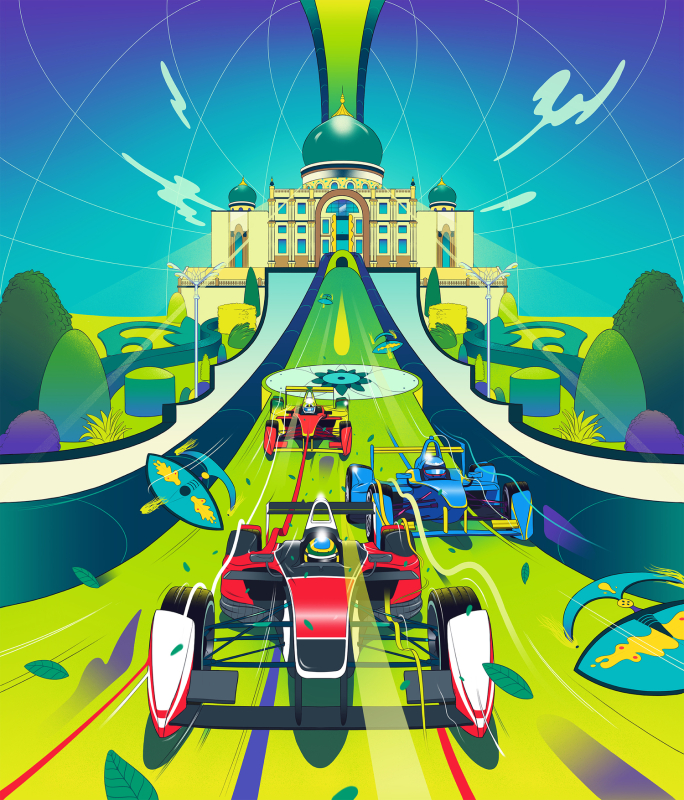 Of course, I'm partial to sea creatures.  I think you can especially see the influence of woodblock prints in these two. 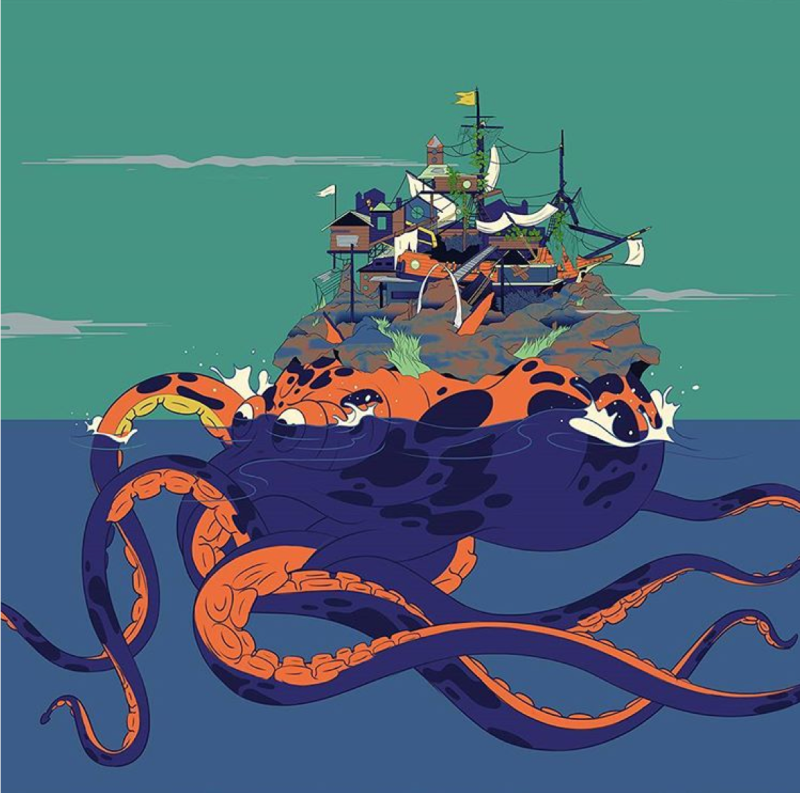 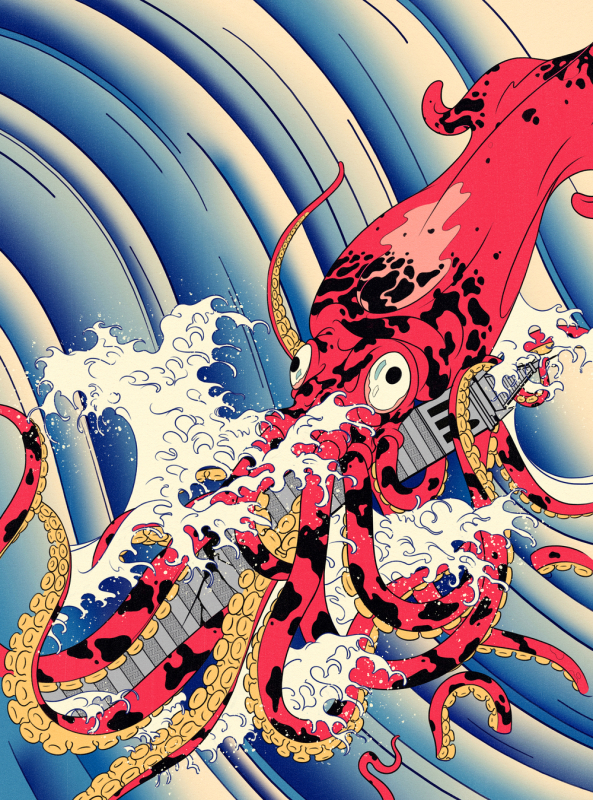 Some more of his work at the China Heights Gallery: 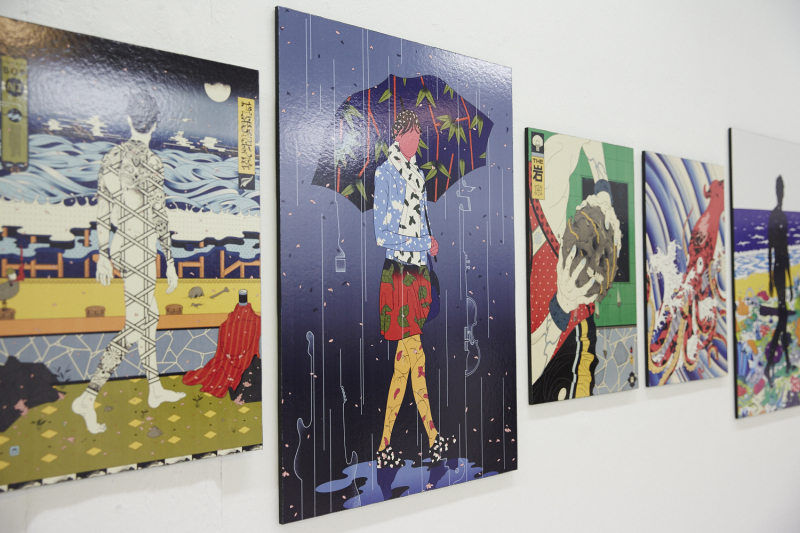 Overall, I'm dismayed that this collection was exclusive to Australia, and I find it odd that it didn't even make it to the Asian markets - if they had, I may have had a chance of acquiring these.  I know technically they're hair products but I still would love to have gotten my hands on them.  What's even sadder is that there is another artist series that Shu did earlier this summer and it's the same Australia-exclusive shtick, so I can't get those either.  (I'm still going to cover the series anyway though so stay tuned!)  Finally, I really admire whoever curated/installed the gallery show.  If I had a physical museum, artist collabs would look a lot like this.

Which is your favorite?  I liked all of them but I think Emma Mulholland's is my pick.  While she didn't create an original design specifically for the collaboration, the sheer absurdity of the lizards and basketball print, plus the fact that it had absolutely nothing to do with hair care, made an excellent choice for the bottle in my opinion.