Buckle up and start your engines, 'cause you're in for a wild ride!  Well, as wild as this boring old curator can be.  ;)  I almost feel like I need a flow chart or diagram to explain the myriad and complex ways cosmetics can be related to cars, and by extension, women. I can't go into much detail since that would be an entire book, but I can provide a basic summary.  The first thing that comes up when I searched for "women and cars" is images of "hot" (read: young, thin, usually white) women standing next to, or perched on top, a car.  Traditionally these women have been used to sell cars to men; but instead of the opposite (i.e. showing hunky male models), makeup can be used to persuade women consumers into buying a car, and sometimes vice versa (a car is used to sell makeup).  Makeup and car collaborations are fascinating, I think, because they're so obviously an attempt to coax a population that's usually not associated with cars into taking an interest in automobiles, and what better way to do that than to appeal to a woman's supposed vanity?  Obviously, I love makeup and don't believe many aspects of it are un-feminist, but I do find trying to reach a female customer almost solely through the use of makeup to be remarkably sexist.  These tie-ins are also interesting when we think of the admittedly shady strategies used by Mary Kay.  Instead of being a passive consumer of cars and cosmetics, a woman could sell makeup to earn a pink car - the reverse of some of the ads and collaborations we're going to look at today.

Starting in the 1950s makeup became a way to get women on board with the idea of car ownership.  As this site devoted to the Dodge LaFemme, the first car marketed specifically to women, explains, "Shortly after World War II (and the Korean War) America entered a new era of prosperity and success. The days of one car families were fast becoming obsolete and families were now buying second cars to accommodate their new lifestyles. Suburbs were springing up outside urban areas and super highways were the wave of the future...Living in the suburbs meant the breadwinner had to drive to work downtown each day, leaving the housewife without a car. With the current prosperity being experienced in America, it seemed natural to go out and buy a second car for 'the wife'. But what car to buy?...Gone were the days of 'the wife' simply staying at home. If 'the wife' was getting a new car, then Dodge needed to produce a car that 'the wife' would want to be seen in."

In addition to the cars' overall design that was meant to entice women, an exclusive makeup kit was included to emphasize that this was a vehicle made especially for the ladies.  The 1955-56 Dodge LaFemme was a pink (naturally) car that boasted not only a matching raincoat and umbrella - if, heaven forbid, you got a flat tire in the rain - but also a special compartment hidden in the armrest supplied with an Evans compact and other items. 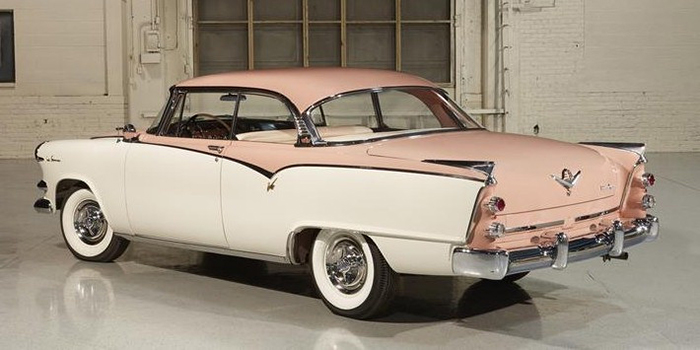 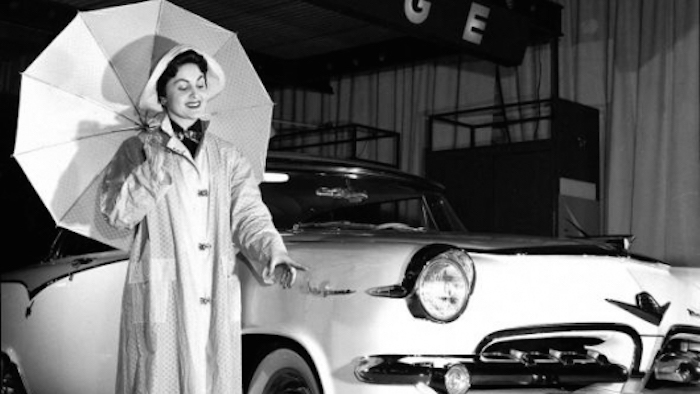 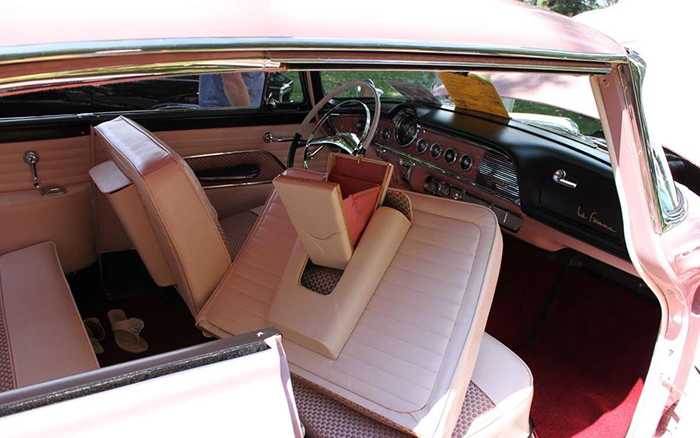 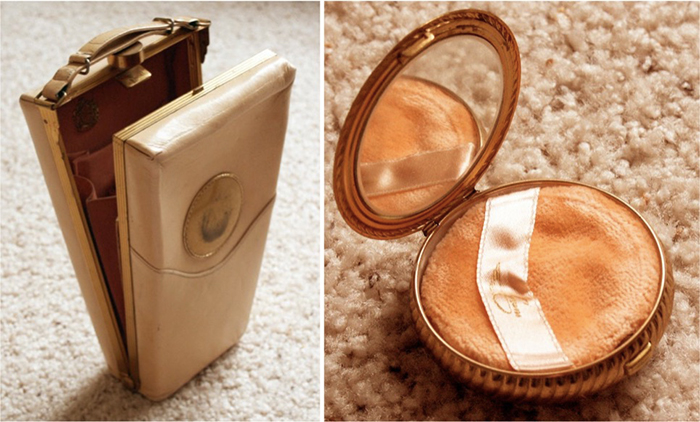 From the photo below it looks like Elizabeth Arden's Ardena was also included, which seems odd - why go with two cosmetics brands? 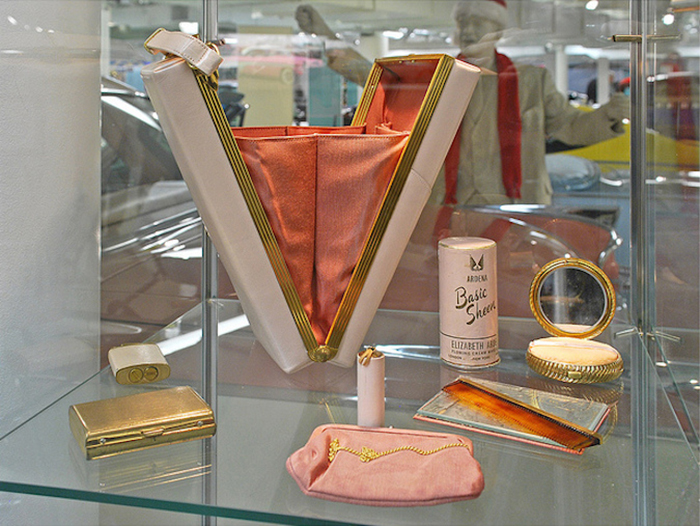 Apparently La Femme failed to be a popular seller.  Despite the alluring inclusion of cosmetics, the rest of the marketing was not on the same level as that for other automobiles.  "Some suggest that the flop of the La Femme model was due to its lack of marketing exposure. It was only displayed on single-sheet pamphlets; there were no shiny demonstration models and no evidence of magazine, radio and television advertisement. It was likely most American women never even knew it existed at the time."  Well, color me surprised - promoting a car geared towards women was not treated with the same importance as other (men's) cars?  Shocking!  Sarcasm aside, it is interesting that Dodge didn't see the need to spend the same amount of advertising dollars.  If anything, I would think a car company would have to work doubly hard and put more funds towards marketing for a segment of the population that typically did not own cars.  Guess they thought the makeup kit alone would hook women in without having to do a ton of additional advertising.

Despite this failure, Elizabeth Arden followed suit in 1959 with a tie-in to the Chrysler Imperial.  The makeup and skincare kit was stashed in the glove compartment.  The advertising also highlighted women's ability to be totally in control while still, of course, retaining a ladylike manner:  "The Imperial 1959 is powerful but well-tamed...does what you ask, instantly, serenely...you sit head-high, imperially straight, as becomes a woman whose car is so much hers that even the interior fabrics are an obedient and tasteful foil for her ensemble."  In a world where women couldn't even have a credit card in their own name, I could see how the prospect of independence and power through owning a car solely for her use would definitely be appealing.  Still, if we're to follow the aforementioned '50s narrative of suburban families with the husband as primary breadwinner, how empowered could his wife really be?  Even if she drives a car designed for women, the man still paid for it. 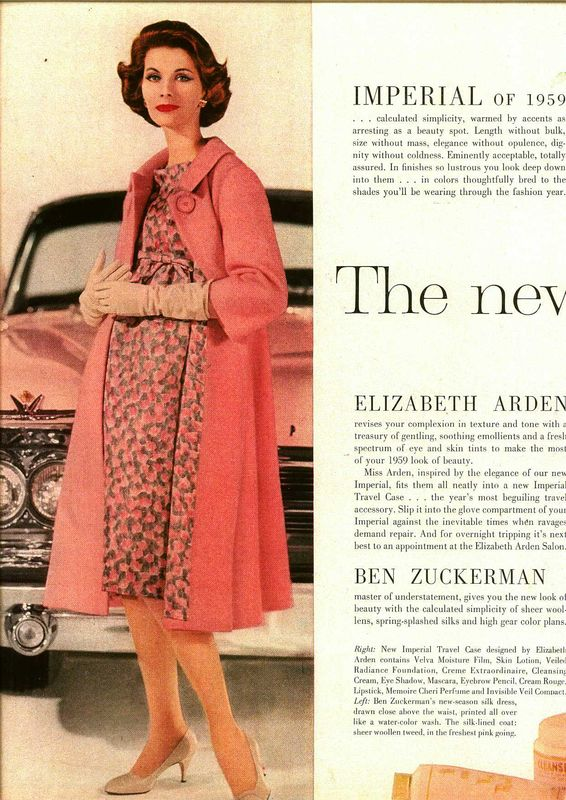 While Chrysler made a bigger marketing attempt than Dodge by placing ads in Vogue, I'm not sure if the sales of this car in "Arden Pink" fared any better than LaFemme.  Nevertheless, automobile companies had alternatives for getting cars on women's radar via other sorts of collaborations with makeup companies.  Take, for example, this 1955 Cutex ad for a red shade inspired by Ford's Scarlet Thunderbird that "separates the sirens from the sissies!"  If you're woman enough to wear this color, you're woman enough to own a Ford. 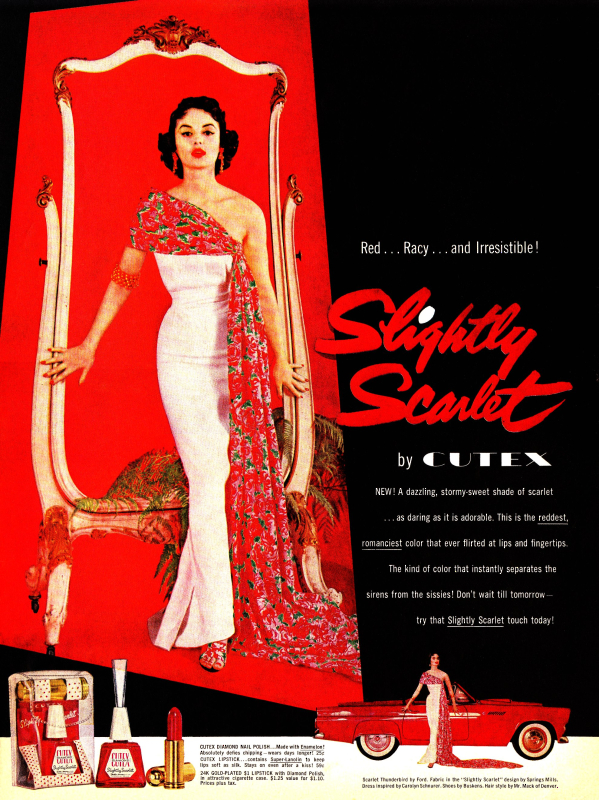 Yet another tactic was the giveaway.  In 1967, Dorothy Gray and its sister brand Tussy (owned by the same company) advertised sweepstakes to win cars in the same shades as their lipsticks, which naturally had car-themed names like Defroster. 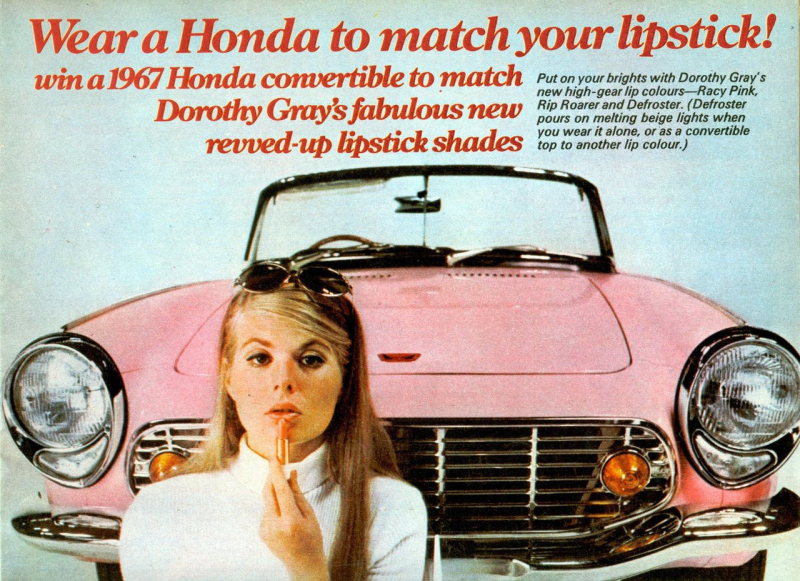 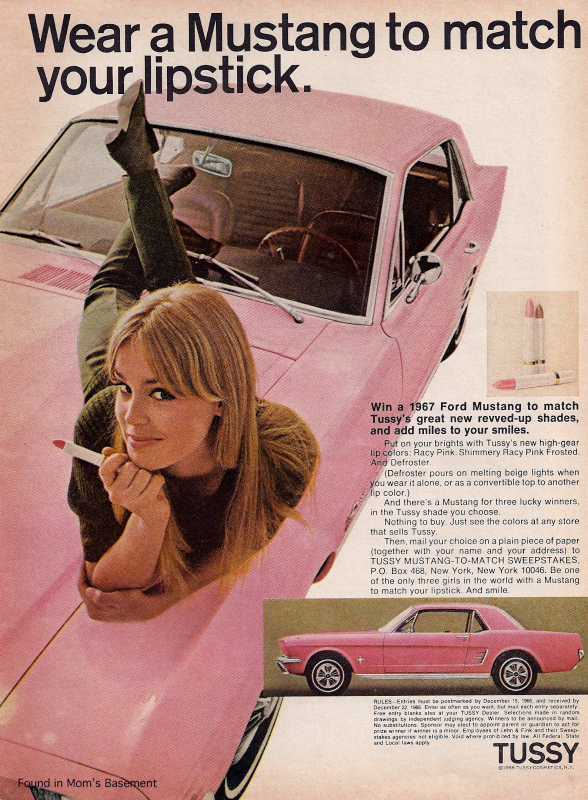 More recently, in May Givenchy revived the idea of a car designed just for women in the launch of the Givenchy Le MakeUp, produced by French manufacturer DS.  Le MakeUp borrows Dodge's concept of esconcing an exclusive makeup kit in the armrest.  The car is also "fitted with a special LED lighting system on the two sun visor mirrors in the front seats, for ease of make-up application before or after driving. Floor mats feature the limited edition Givenchy logo, while the dashboard is rose pink." While the exterior isn't pink, I can't help but be amused by the fact that they retained at least some inclusion of the color. 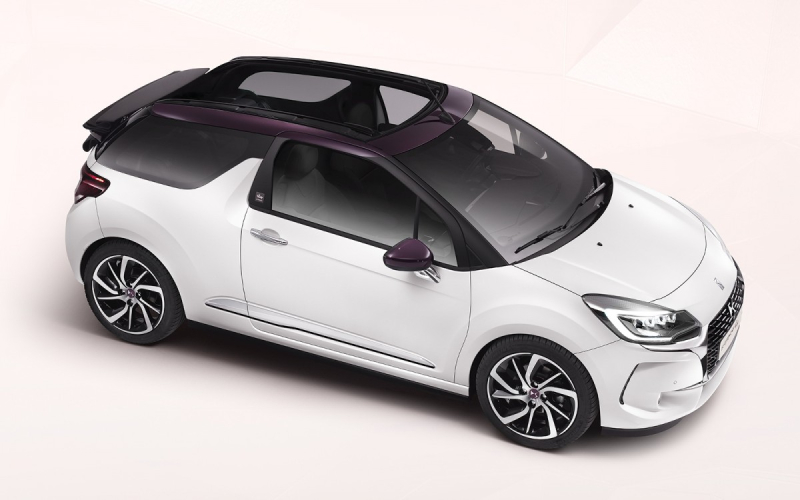 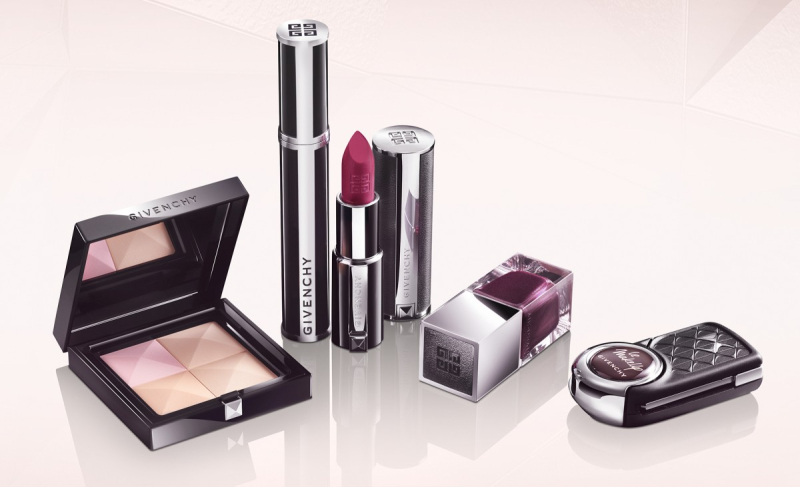 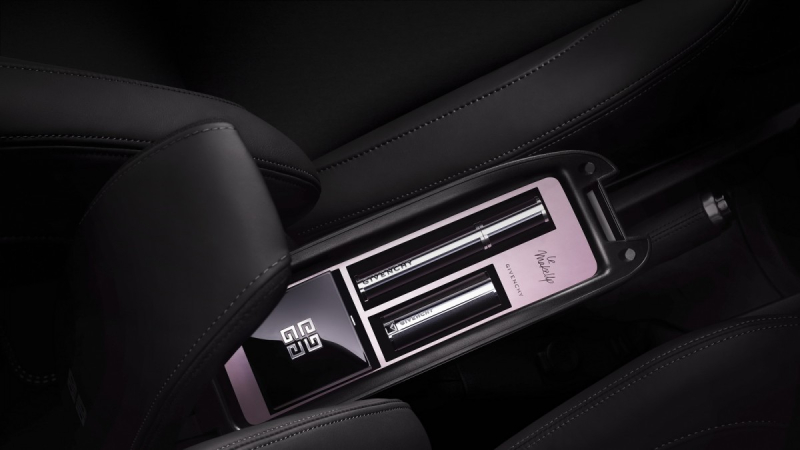 Not only that, but "Whisper Purple" is used for the roof, mirrors, a hubcap accent and finally, to fully tie the car to the makeup, as a nail polish in the cosmetics kit.  There's also a video of Ruth Crilly, founder of the popular beauty site A Model Recommends, highlighting the car's various features while wearing the makeup. 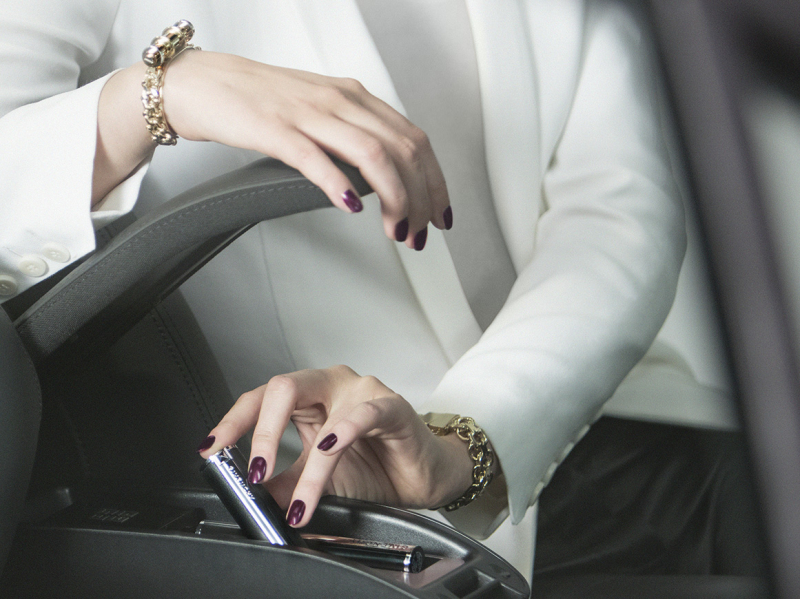 While the promotional copy claims that the car was designed to "meet to meet the expectations of many modern-day women who are always on the go," Givenchy's Artistic Director for Makeup Nicolas Degennes says, "I dreamt of a car that would enhance the beauty of women. They would be beautiful because they would be at the helm of the new DS3, a vehicle that characterizes this era. Beautiful because of colour, the reflections on the face. Beautiful because of the liveliness of the pink interior.”  Indeed, even the style of the tires, one the company calls "Aphrodite," reference beauty ideals for women.  All of this further bolsters my opinion that the notion of gendered cars is astonishingly dated and sexist.  Givenchy may have come up with a modernized version of the "Arden Pink" Chrysler or Dodge LaFemme, and while many more women today are making their own car payments, the cosmetic aspects of the DS's design remain firmly in the '50s.  Especially since the inclusion of makeup in a car meant for women completely ignores the fact that this is the 21st century, and there are men who wear makeup as well as non-cis genders.  Finally, there are still folks out there who think all women do before/during/after taking a spin in their car is applying makeup. The remarks at this website regarding the Givenchy car take the cake:  "Girls don’t have such a great reputation as drivers, and a car with a makeup kit? Well. Let us only hope and pray that some 20-year-old doesn’t stop in the middle of a highway to dab a fresh layer of paint on her lips." Oof.

Along these lines, even in the art world women can't escape the traditional link between cars and makeup.  For International Women's Day in 2012, Indian car artist Sudhakar Yadav created several cars in the shape of a shoe, purse, lipstick and eye shadow as a tribute to women.  Stereotype much? 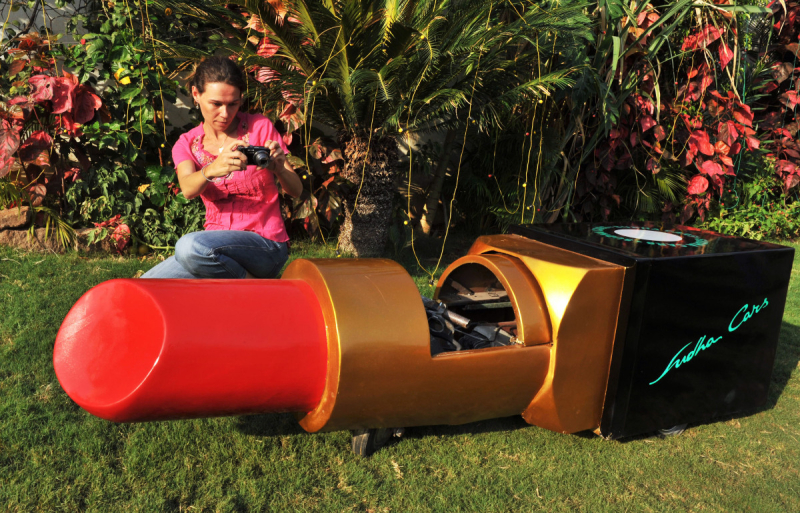 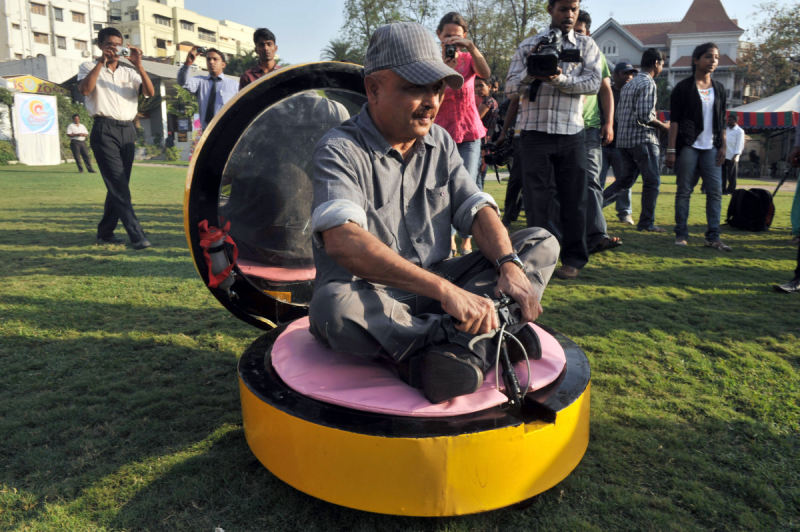 I mean, don't get me wrong, these look like a lot of fun and I give the guy credit for acknowledging there even IS an International Women's Day.  I'm sure his intentions were good and these were made as art, not to sell cars.  But it still rubs me the wrong way.  Obviously all women care about is makeup and shoes and bags, and they would appreciate the artist's offering of wacky cars only if they were in the shape of girly things.*

As a seemingly harmless response to all of this, I'll leave you with Italian brand Collistar's summer 2016 lineup.  The company teamed up with, fittingly enough, Fiat to create a collection celebrating the 500 model. 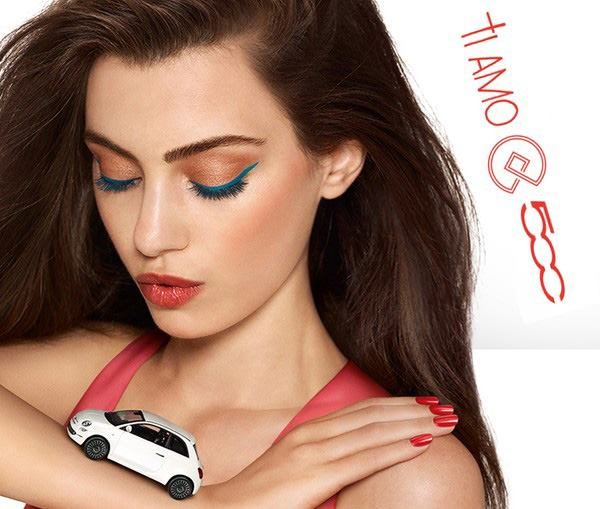 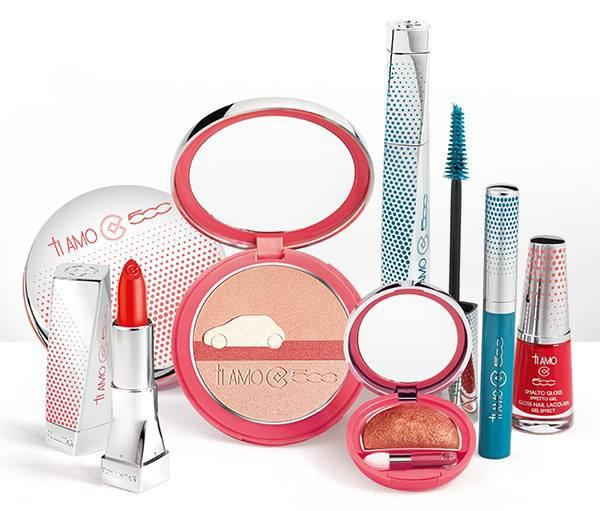 How adorable are these blushes?! 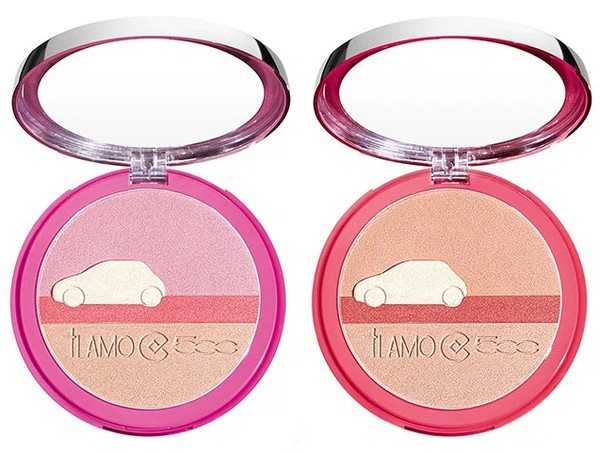 Personally, I generally hate cars (their design and history bores me, not to mention that they're dangerous...I have a terrible fear of driving), and no amount of cool makeup is going to make me more accepting of them.  And I sure as hell wouldn't buy a car designed just for women - I dislike the fact that in 2016 some companies are 1. still thinking in terms of binary genders for products that should so obviously be gender-less, such as cars, and 2. still thinking that a car's key selling points to reach women need to involve makeup.  The Collistar collection, however, is something I'd gladly snap up if I had access to it.  ;)

*The art cars remind me of the time my sister attended a conference on women business leaders, and the swag was all Clinique products.  Not like, a tech gadget or a nice business card holder or something.  (Ironically, my sister doesn't wear a stitch of makeup.  I believe her exact words were, "I don't even use this shit!")