I received a rather intriguing inquiry from someone trying to identify an object that once belonged to his deceased aunt.  I was up a creek initially but luckily the interwebz allowed me to unravel the mystery.

First, the object in question.  It's obviously a nail buffing stone, but beyond that I had zero information... 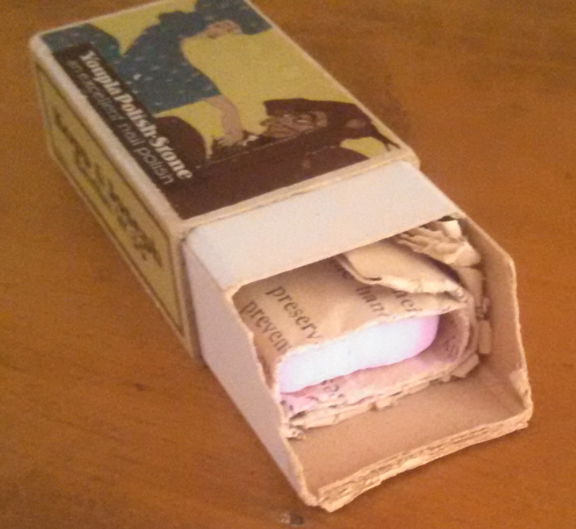 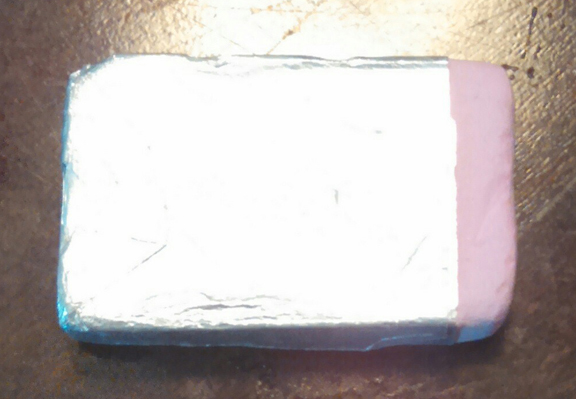 ...until I found this print.  I totally can't remember what search terms I typed into Google to pull this up, but I'm glad I came across it. 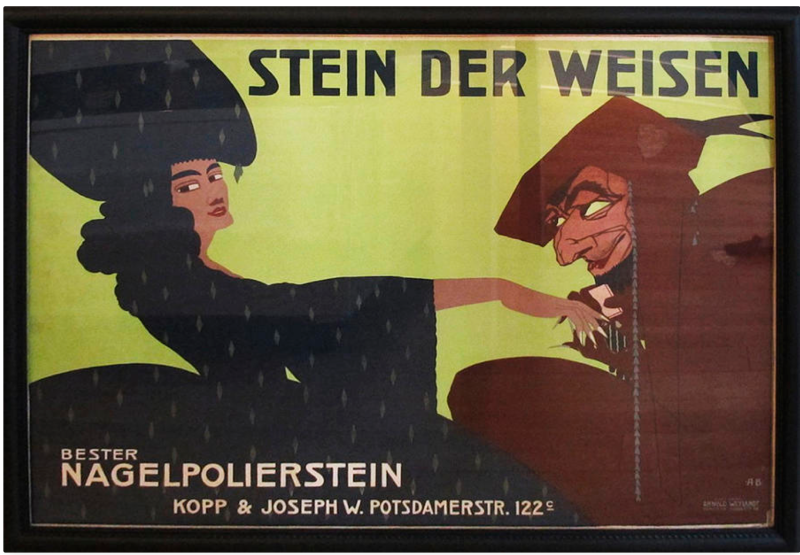 According to the description, "Stein der Weisen" means "Philosopher's Stone".  The man on the right is turning the woman's nails into gold using this seemingly magical nail buffer.  I wasn't familiar with the lore of the Philosopher's Stone, but the stone apparently possessed alchemic properties, hence the transformation of this lady's nails into gold.  The artist for the ad was Alfred Böld; unfortunately I couldn't find any sort of official bio for him.  This site says that he worked primarily as an advertisement artist and was active till about 1926.

Just for fun, here are the other two works of his I was able to find online. This one, also from 1911, is for something Google Translate calls "head washing powder", which I'm assuming is shampoo.  In any case it's lovely. 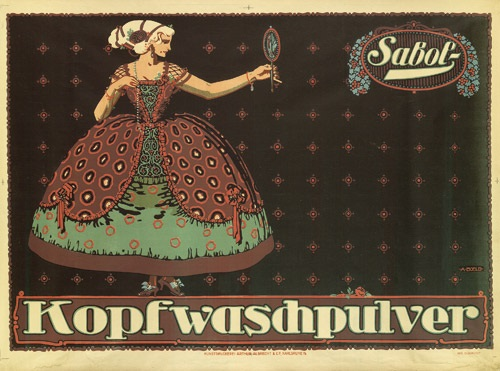 The other image was a poster from 1912 for...well, I have no idea.  Google Translate gave me the exact same words I typed in to translate.  Some kind of event or festival, I guess, since it has specific dates. 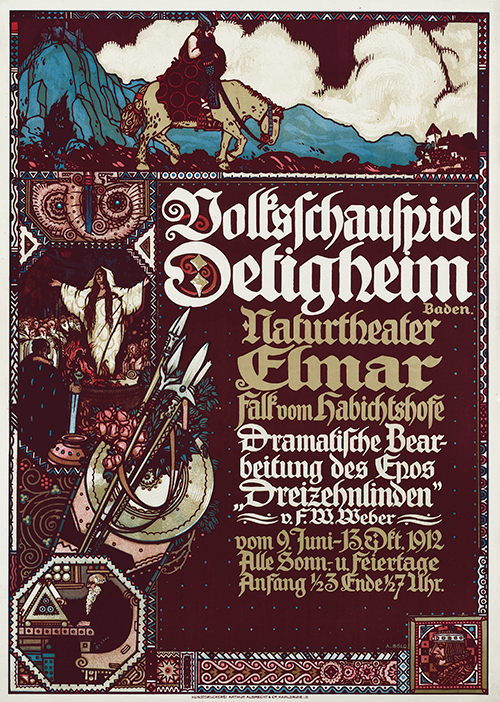 It's a shame there's not more on Böld, as I'm liking the few works by him that I could access.  To my delight there was more information available on Kopp & Joseph, which I stumbled across in this book (which honestly seems like a depressing read.)  The nail buffing stone was a quite popular item, and the company not only made cosmetic items but was also a wholesaler for them (see p. 80).

Here's a picture of their storefront in Berlin around 1927.  It's so pretty, I wish drugstores still looked like this. 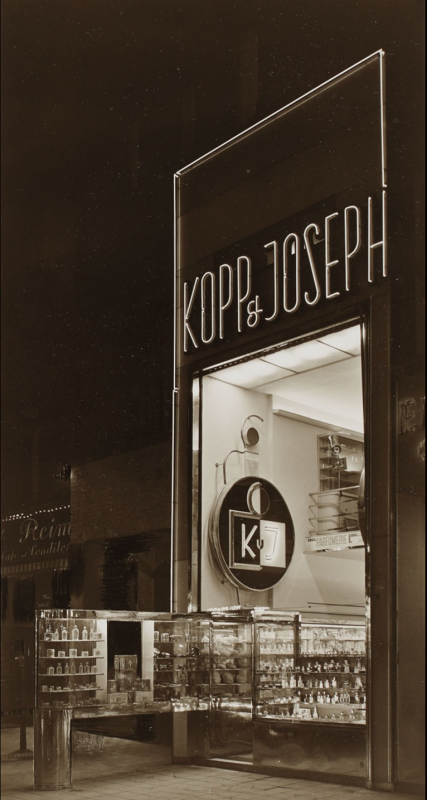 What I couldn't figure out is how a German item ended up being sold in the U.S. market and for approximately how long it was sold here.  The original ad dates from 1911, and the person inquiring informed me that his aunt was born in 1912, so the nail buffer had to have been sold in the U.S. at least through the 1930s (I highly doubt she was purchasing such an item as a child.)  At my request, the inquirer kindly unwrapped the insert that I had spotted inside the box so I could hunt for more clues. 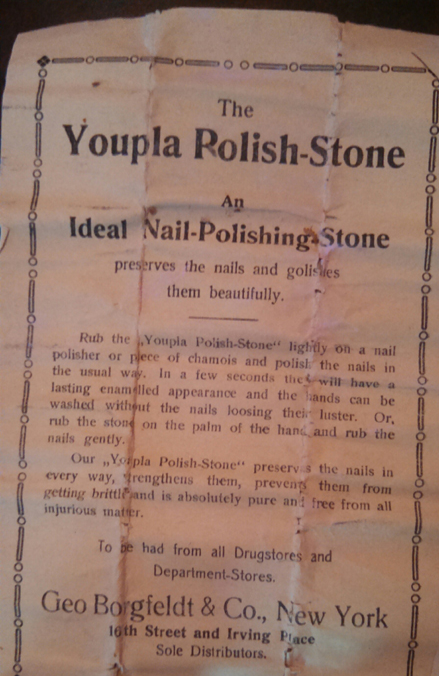 This was the big break in the case, so to speak.  How an extensive history of a seemingly obscure company ended up online I don't know, but wow was I lucky it exists!  The George Borgfeldt company manufactured many things - they were particularly known for dolls and toys - but I noticed "druggist sundries" was listed among the many departments, so obviously this is the same company that produced the nail stone.  The history also says that the company was known as George Borgfeldt & Co. from 1883 through 1933, and was liquidated and changed to George Borgfeldt Corporation in 1933 and was in operation till 1961.  Given that it's listed as Geo. Borgfeldt & Co. on the inside wrapper and the date of the original German ad is 1911, I initially thought the product had to have been made between 1911 and 1933.  However, I found a 1915 U.S. patent for Geo. Borgfeldt nail items, including "enamel, polish, paste, bleach, pomade and tints for the finger-nails,"  so that means it's unlikely it was sold in the U.S. prior to 1915, as Borgfeldt would have had to secure patents and translate everything on the package into English before selling.  Additionally, the company moved to new headquarters in 1910 and stayed there until 1931. The address for this is the same as the one on the insert:  16th street and Irving Place. 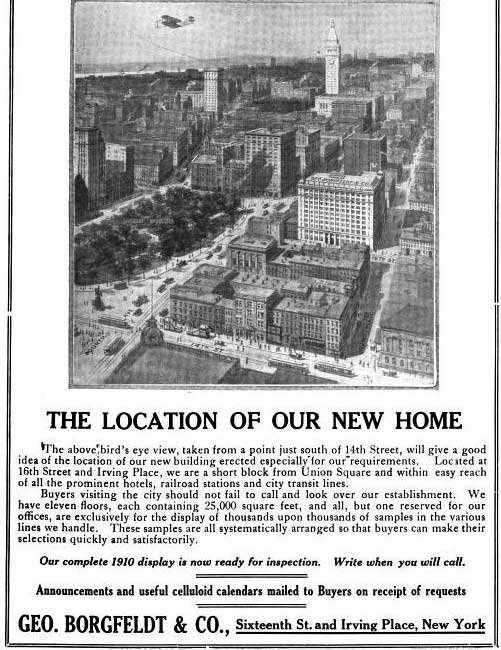 Given what we know about the patent date and the address, that means the particular nail buffer in the inquirer's possession was sold in the U.S. between 1915 and 1931. So my initial hunch was correct - the item dates to the early '30s.  Also, since the Borgfeldt company was primarily an importer of items outside the U.S. and Kopp & Joseph operated partially as a wholesaler, my best guess as to how this nail buffer ended up being sold in the U.S. is that Borgfeldt scoped out popular items from different countries that they could get wholesale and distributed them here with their name.

The inquirer also asked about the monetary value of the nail buffer.  Unfortunately for him, most vintage cosmetic items, no matter how cool the packaging is, don't go for much.  Sure, there are some rare and in-demand items that fetch several hundred dollars, or even artifacts that go for thousands, but generally speaking these things simply don't carry a high price tag.  I found another example of a Youpla item on e-bay which sold for a whopping $7.99.

I'd be curious to see how the polish actually works, since the packaging is so different than the bottle and brush we usually associate with nail polish.  In these pictures it reminds me of a pack of Lifesavers. 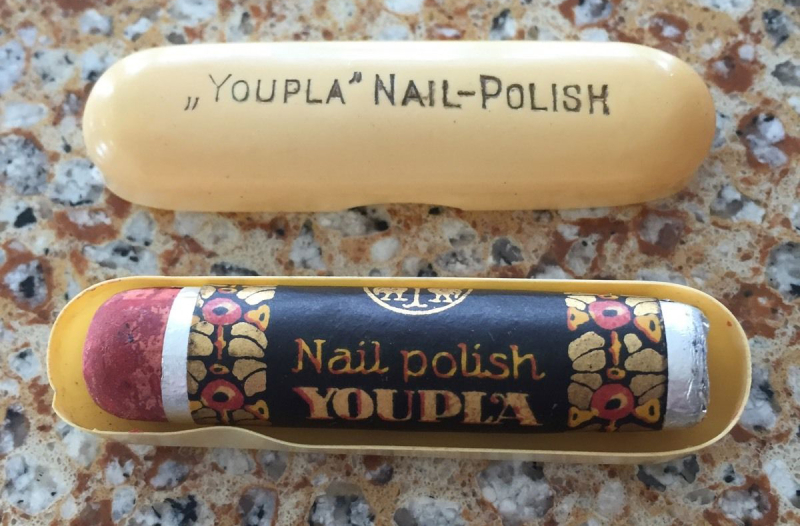 Based on the price of this item, but also taking into consideration the excellent condition of the nail stone, the fact that it was a best-selling item and the packaging was based on actual artwork, I estimated it could be sold for about $20-$25 for the average person browsing vintage beauty items.  If there were someone out there who is either a rabid collector of Philosopher's Stone ephemera or one who focuses exclusively on vintage nail products, it could go for slightly more, maybe high as $50.  But I know I certainly wouldn't pay more than $35 and I'm someone who truly values the historical and artistic significance of objects like these.

To conclude, I'm so glad online searches came through, especially since when I first laid eyes on the piece I had absolutely no clue what I was looking at and was sure it would be impossible to find anything.  While I wish there was more on the artist behind the packaging, I was very pleasantly surprised to come across any information on both Kopp & Joseph and the George Borgfeldt companies.  Given the difficulty I've had with other inquiries in the past (and there are still more I couldn't answer, but those are for another edition of MM Mailbag), I was so very happy to provide some pretty good details about the item.