With this post I'm attempting to forget about MAC's previous misstep.  Fortunately, their collaboration with quirky designer Chris Chang is doing the trick.  After earning her degree at Parsons and an 8-year stint for Prada Taiwan, Chang launched her own line called Poesia.  Reflecting the designer's "fascination with the symbols and icons of her childhood dreams," the line seeks to embody the idea that "clothes should be easy and wearable without burdening women with unnecessary discomfort in structure and silhouette."  It seems fairly straightforward, but when you actually look at Chang's creations, there's a lot more going on than that description implies.  So let's take a peek at some of the MAC collection.

Naturally I adore the bold shades chosen for both the packaging and the products themselves.  In a press release for the collection, Chang notes, "Color is the integral fuel of my imagination and the spirit MAC and I share. This collaboration is a dream come true for the maximalists of the world."  I would definitely agree that this is the polar opposite of minimal makeup! 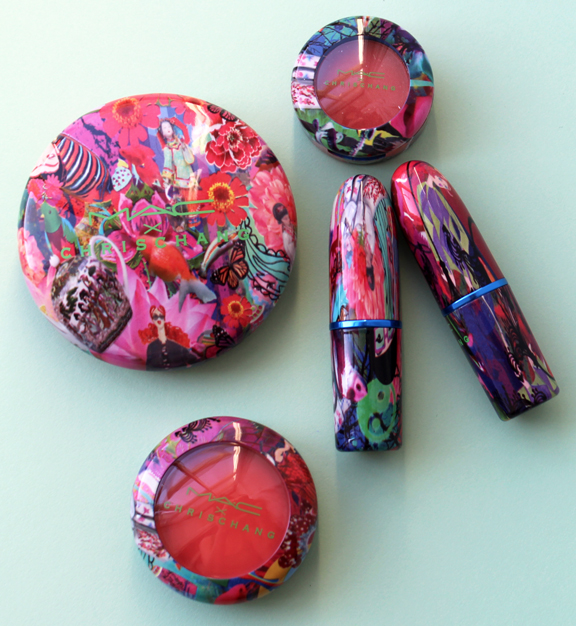 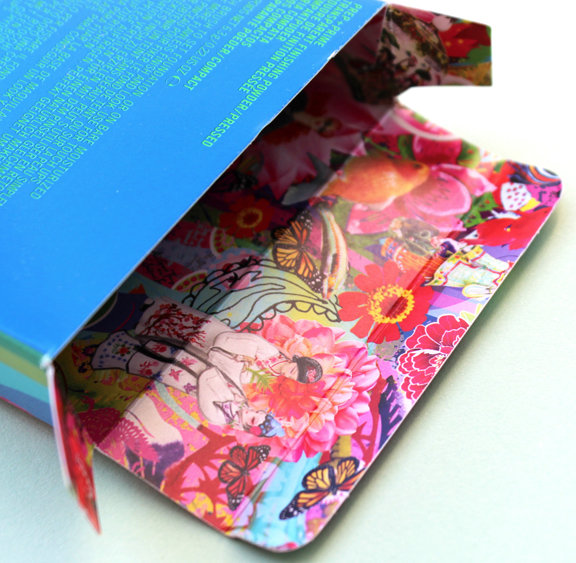 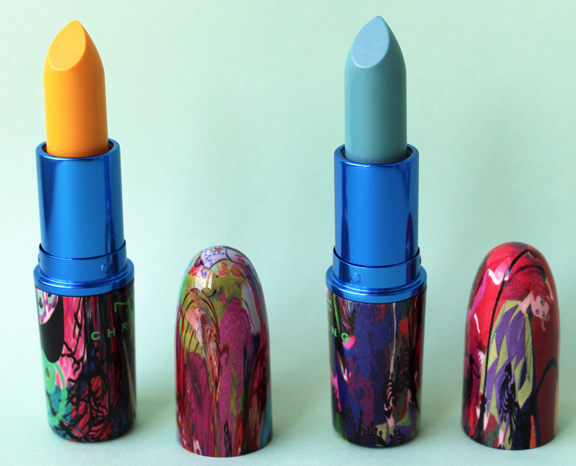 The packaging features a silk screen print Chang designed specifically for MAC, containing a mishmash of motifs from her previous collections. 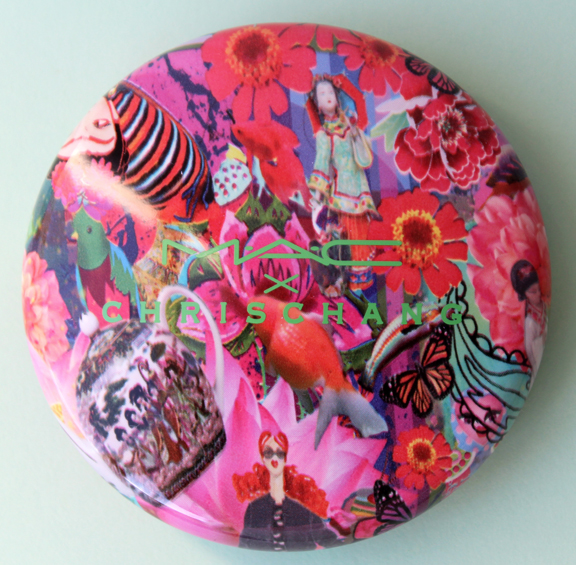 Unfortunately I couldn't place every detail, but here's an attempt anyway (plus it gives me an opportunity to present some of Chang's fashion).  The vase on the left of the powder case may be inspired by those seen on some pieces from the spring 2016 collection. The butterflies are borrowed from the spring 2015 collection.

The birds and goldfish appear on the wallpaper at Chang's website... 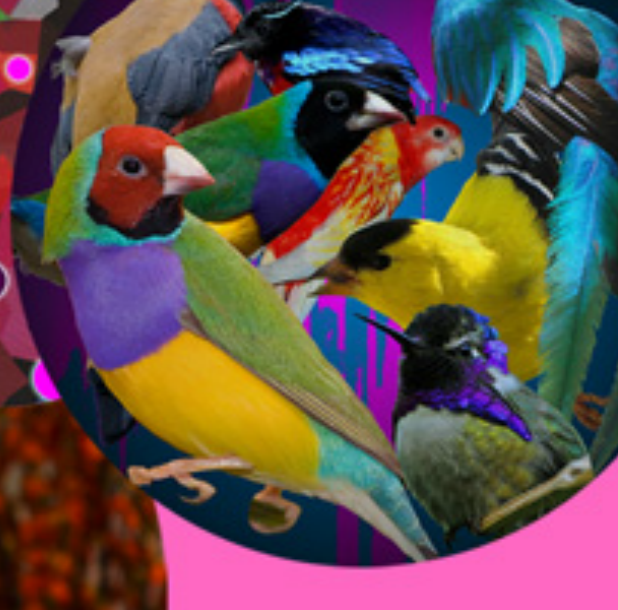 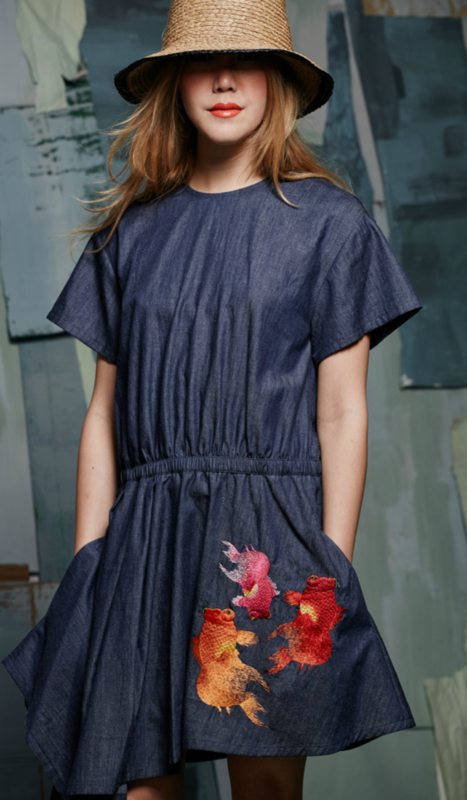 Overall I think the print on the powder most closely resembles one from the spring 2012 collection. 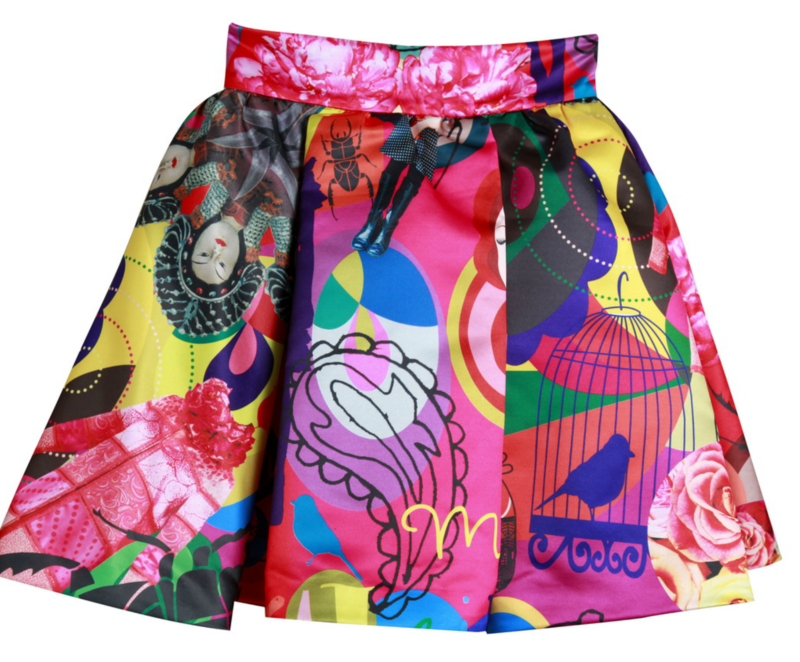 The images on the outer boxes reference Chang's original concept for the MAC collaboration, which was "Kunqu madness".  She explains to Allure:  "The theme is Kunqu Madness. Kunqu is one of the oldest performance arts from China that combines singing, poetry, acrobatics, and dance—and a lot of hand gestures. And Kunqu has a very specific, avant-garde look. The makeup and costumes are exaggerated, so when I was asked to collaborate it took me five minutes to decide that this is going to be around Kunqu. In the collection there are all of the colors you see in the costumes."  For Chang, I'm guessing a big part of the appeal of modernizing Kunqu is the "maximal" nature of it.  She tells Pop Sugar, "When I was going to [Parsons School of Design] in the '80s, people were always talking about minimalism: 'when you’re done with your design, take that one last thing away.' I felt so awkward in this whole teaching method. I thought, 'minimalism?... I’m definitely maxi.' There’s something about Kunqu that’s also very maximalistic and extreme — the makeup, the singing — and also, it’s very poetic." 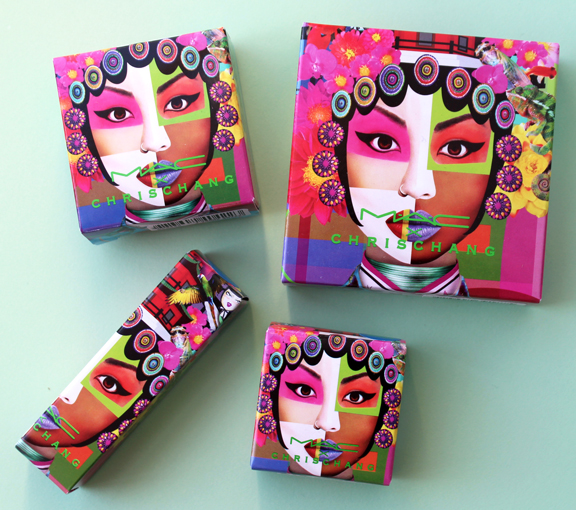 Here are some photos of Kunqu performances - I think Chang's idea of "Kunqu madness" is perfectly executed. 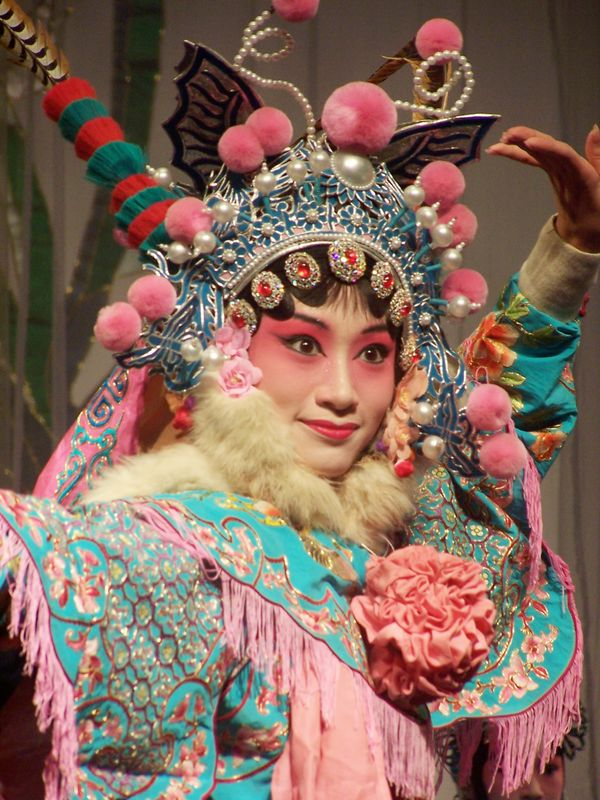 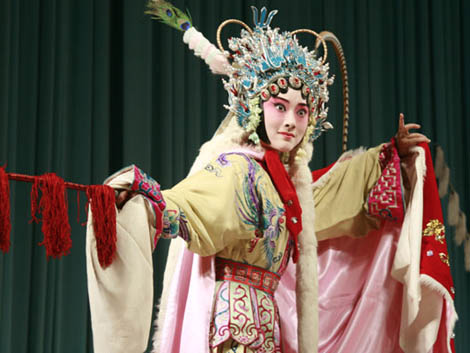 This picture is particularly fascinating, as I think the butterflies and birds resemble those found on Chang's pieces. 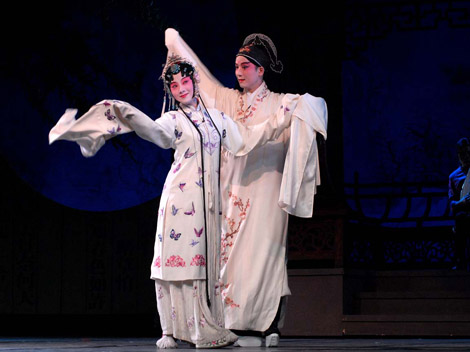 The MAC collaboration is not the first time Chang has referenced Kunqu:  check out the headpieces worn by the models for the spring 2012 collection. As a follow up on Chang's views on color, she also told Allure, "[T]here's no color that you can't wear—it's only a matter of how you wear it and how you apply it. It's 2016, and a woman is about to become the president. All of those rules are so outdated, but that's actually a big part of the Asian mentality. Thinking things like 'I can't wear green' or 'I can't wear orange' because it's not becoming against sallow, Asian skin. I say throw that out the door. It's a different time now, you know?...These colors should be used as war paint. Even if it's something just on the lid, it should be worn as paint, really. And I think that's where the direction for makeup is going. It should be worn like abstract art."  Indeed, at a special fashion show held in Shanghai just for the MAC collection, models had the collection's colors applied in a rather avant-garde style. 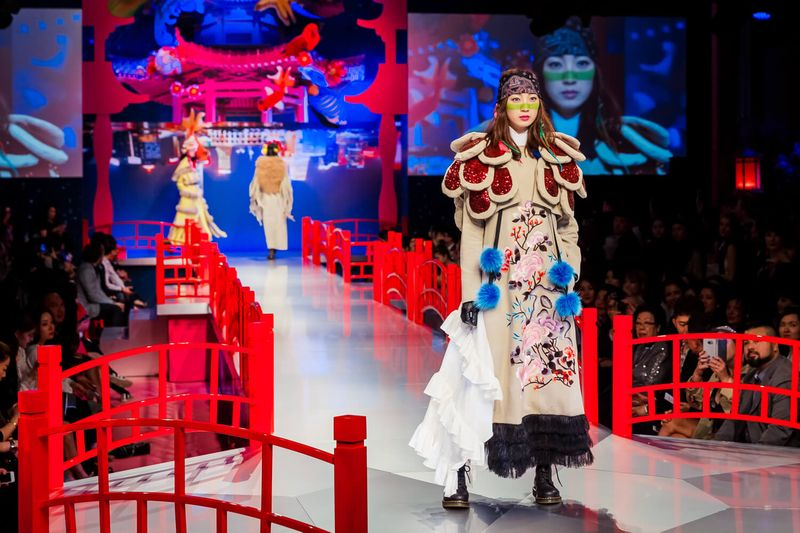 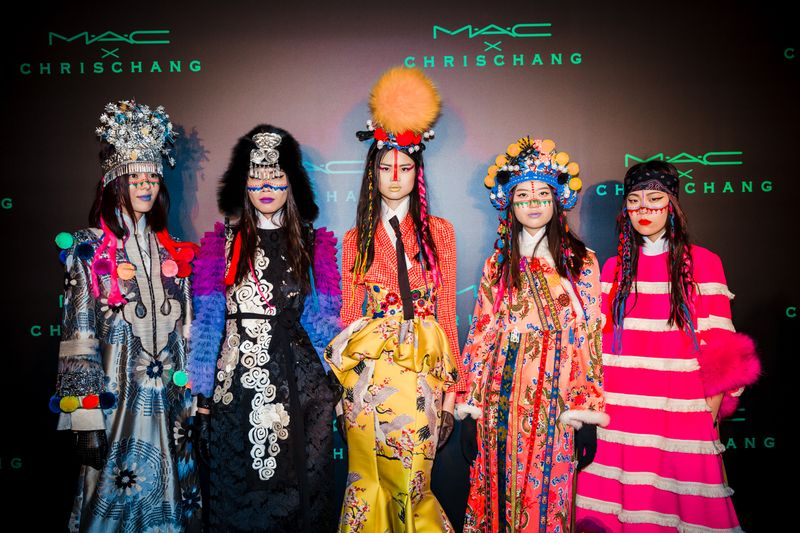 Chang herself also got in on the war paint action.  She looks pretty fierce! 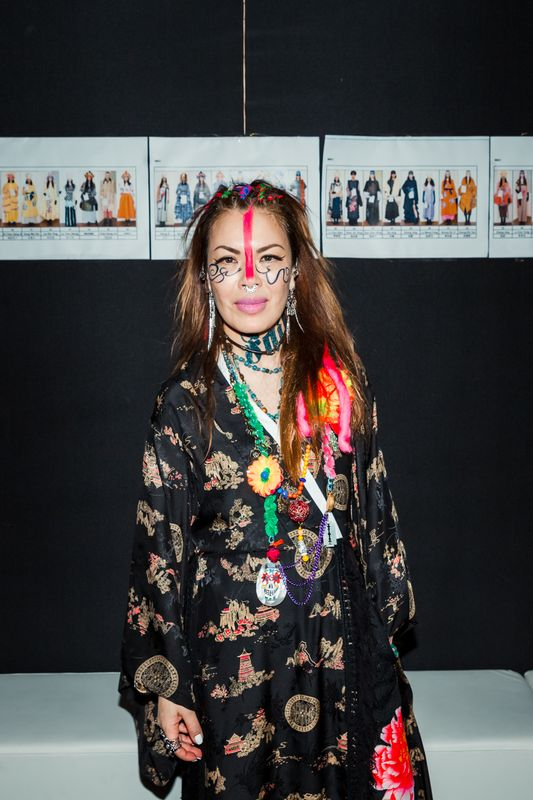 This aligns with the designer's outlook on makeup and fashion:  "I've never dressed or designed thinking, Is this appealing to men? Would men find this sexy? That mentality opens a lot of doors for me, for both how I can dress and how makeup should be worn. It's so satisfying for women to enjoy fashion and makeup. Who cares about men?"  She then elaborates, "Women are strong. We’re equal, if not even better. Makeup and clothes are definitely to please a woman and not to please a man. I hate that [phrase], 'man repellent', so we should dress for ourselves.  Love and relationships are such a small part of what a woman can do."

Chang definitely has it all for me - an appreciation for cultural practices that are thousands of years old, the ability to honor those practices through giving them a thoroughly unique, futuristic take, and a love of crazy bold colors that are worn without giving a damn as to what people find flattering or attractive.  I've never been afraid to wear color, especially on my eyes, but Chang's perspective makes me want to flaunt it in a less traditional fashion (like trying out blue or green lipstick instead of hot pink or grey, which is about as colorful as I get for lips).  I have purchased some pretty out-there lip shades but have yet to find the courage to wear them.

What do you think?  Did you pick up anything from this collection?  And are you a "maximalist" when it comes to makeup shades?