I'm excited to share some pretty innovative works of art that use nail products for this installment of Makeup as Muse.  First up we have South African artist Frances Goodman, who has been creating elaborate, organic-looking sculptures using fake nails since 2013.

Because I'm feeling lazy and also because I think this description captures her work well, here it is in a nutshell:  "In her nail sculptures Goodman uses one of fashion’s ultimate feminine accessories – the false nail, which she layers and overlaps to create form, movement, pattern, and structure. False nails, for Goodman, signify a culture of excess and transience. The artist is interested in false nails as an expendable extension of the body – and has counteracted this by using the nails not to extend the body, but through emphasising size and shape to create bodily forms. The artist states: 'Some of the sculptures are abstract and consider ideas of oozing, spreading, and writhing.  Others suggest snakes and scaled creatures.' These enigmatic works are threatening and foreboding--their shape and scale emulate predators, which smother and overwhelm, yet are simultaneously impotent. The layering and positioning of the nails insinuates movement, yet these works are ostensibly static and, on closer inspection, fragile."

I am still curious to know how she attaches the nails together, approximately how many are used for each sculpture, and whether she sketches them out first.  I know I could have a thousand loose fake nails piled in front of me and not have a clue how to mold them into sculptures like this - it's truly impressive. 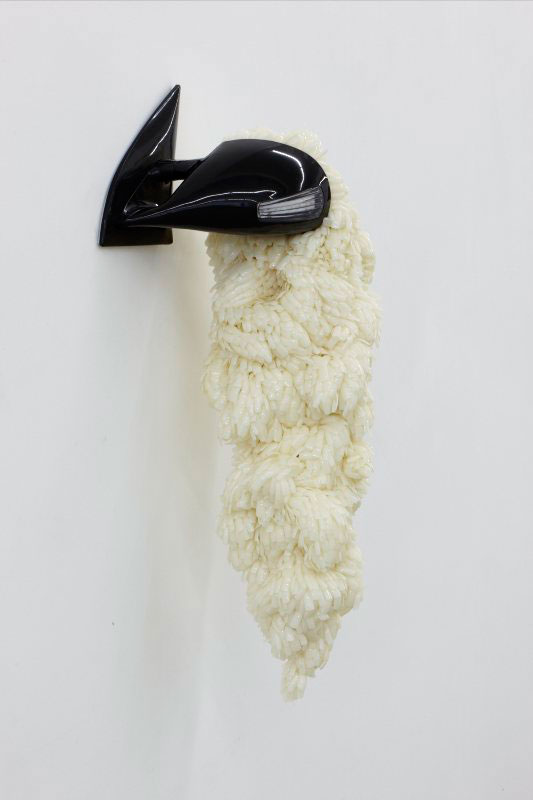 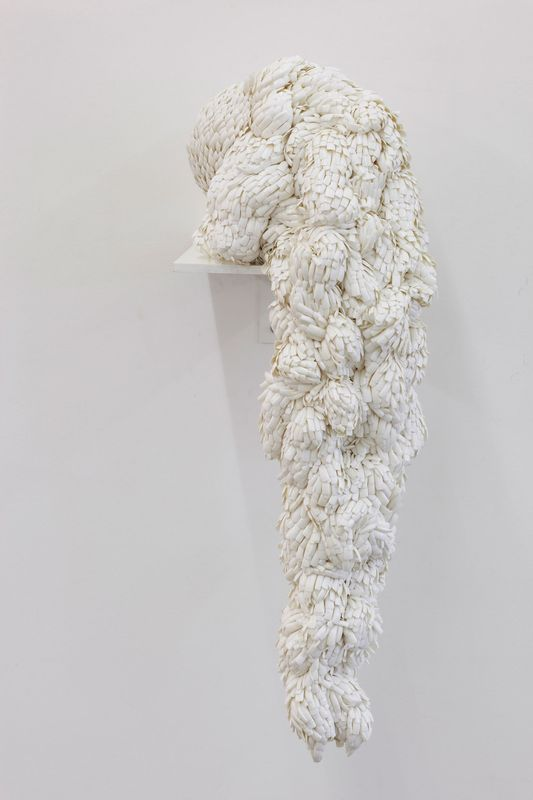 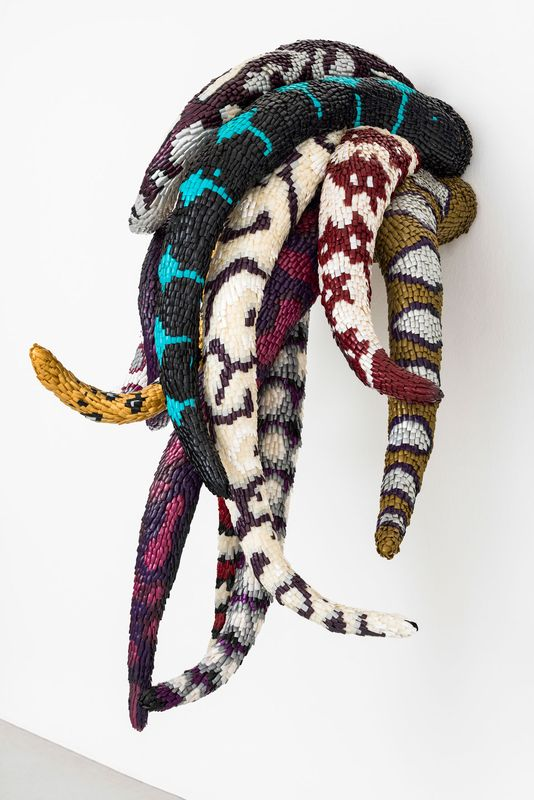 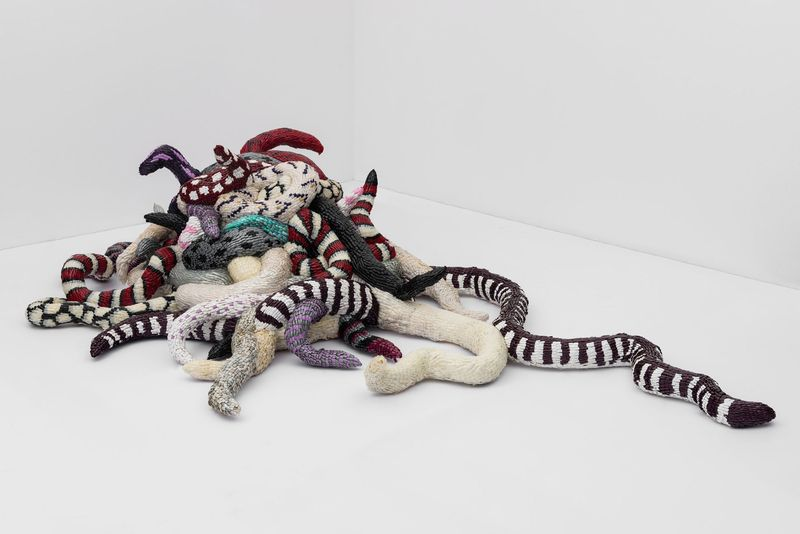 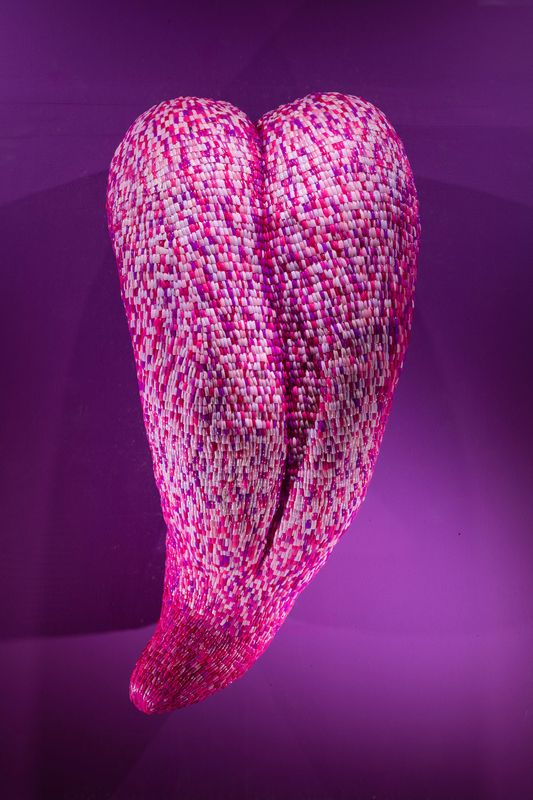 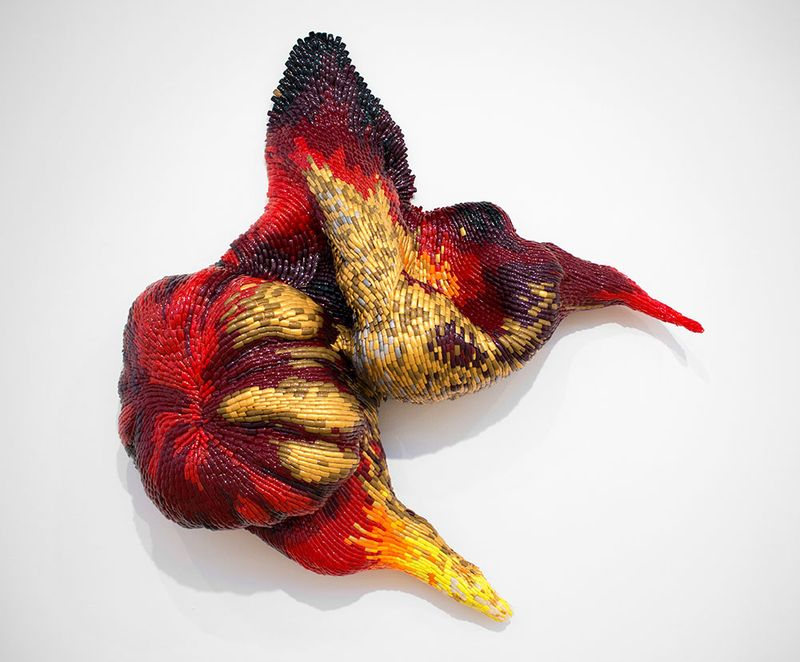 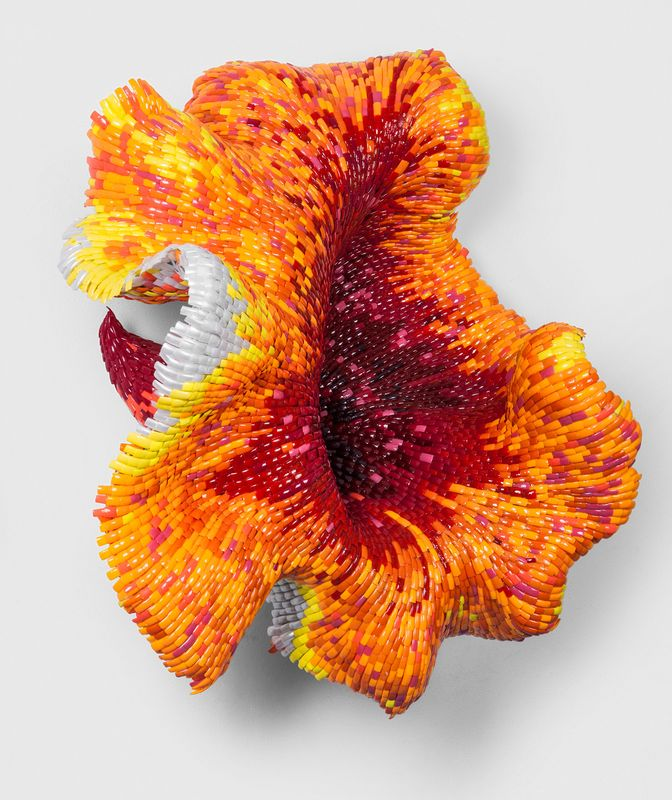 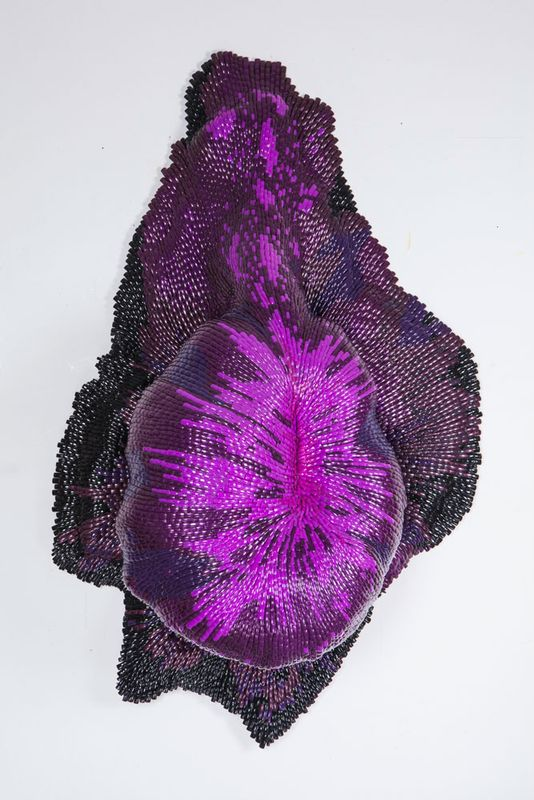 This dress was produced in 2014 and I can't help but wonder whether Anna Goswami, a fashion student in the UK who created evening dresses out of fake nails for her final project in 2015, was influenced in any way by it. (I mentioned these briefly last year.) 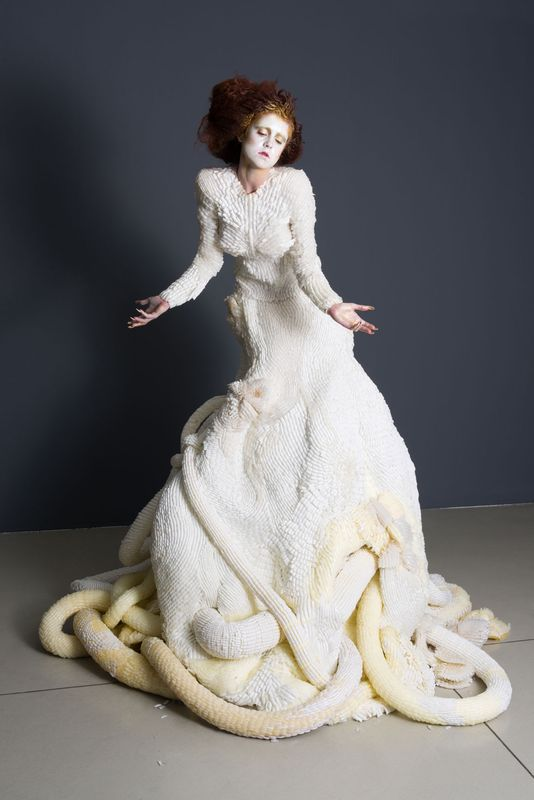 These nail sculptures are not the only beauty-related items in Goodman's oeuvre:  she also makes giant nails and eyelash drawings (both are exactly what they sound like).  Combined with the nail sculptures, they reflect a distinct feminist perspective.  Goodman says, “Women are often asked to make media-influenced choices about our bodies...fake nails and false eyelashes, though, go against that. You’re able to become expressive, to become someone else. You don’t become the idea of who a woman should be. You become the antithesis.”  Working with these materials to create some rather grotesque-looking pieces, Goodman turns the traditional idea of using beauty paraphernalia to look pretty completely upside down, especially in the case of the Medusa - a mythical creature so hideous she turned people to stone with one look.  And in the case of her gigantic, talon-like sculptures of single nails, they become downright menacing.  Naturally I'm drawn to these, as I love any beauty/fashion items that double as weapons. ;)

Next up, we have an update from Lithuanian artist Agne Kisonaite.  You might remember her Giant Lipstick sculpture from 2013, which, while I liked the general idea behind it, I disagreed with her notion that consumers bear most of the responsibility for making "green" beauty purchases.  In any case, Kisonaite is back with another beauty-related piece entitled Glass Blowing, this time using old nail polish bottles. 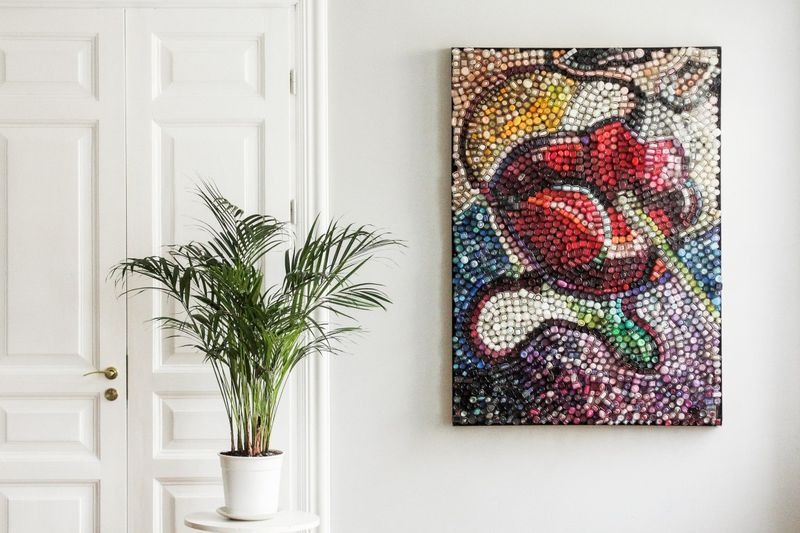 The artist gathered over 5,000 (!) used bottles of nail polish and divided them into 21 color categories.  The finished piece was whittled down to a mere 1,969 bottles. 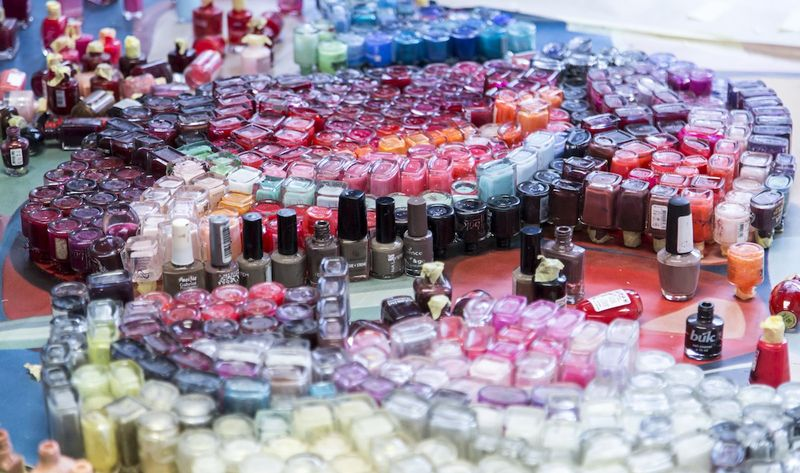 Kisonaite doesn't say where she got the old bottles, but I'm wondering if Avon was behind gathering them the way they were with Giant Lipstick.  Judging from the boxes in the photo below, it's very likely.  I also wonder what she did with the roughly 3,000 bottles that didn't make the cut. 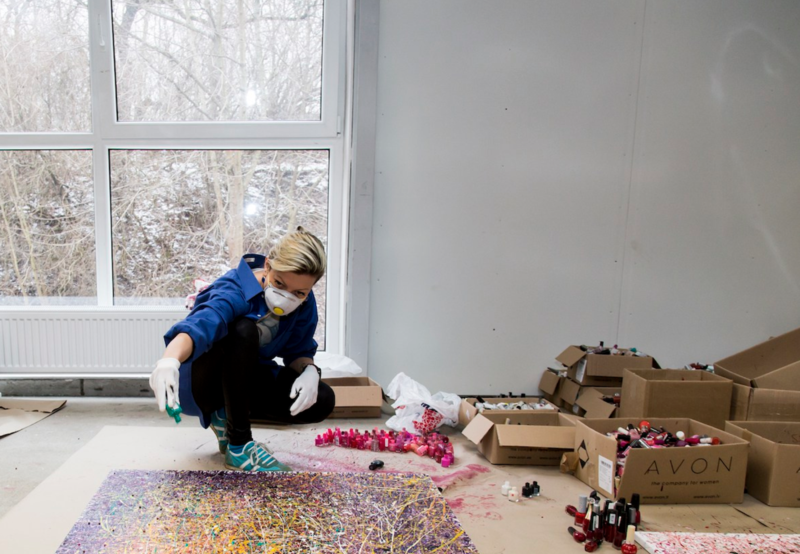 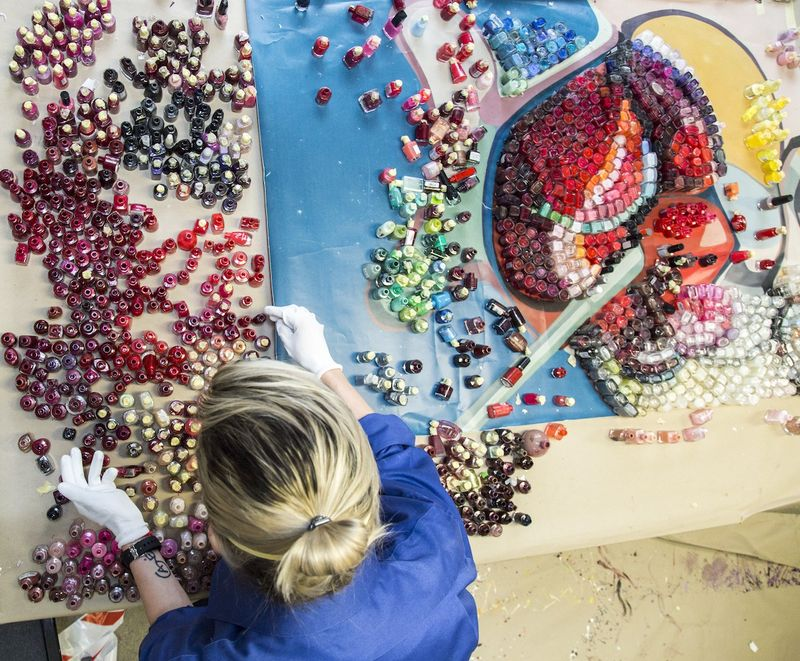 Once again, the goal was to bring attention to the problematic lack of recycling in the beauty world.  Kisonaite says,  "[M]akeup goods are often non-recyclable. This is why 'Glass Blowing' project seemed meaningful to me – these 1969 nail polish bottles didn’t end up as a waste: now they grace our home with their lively presence."  I was heartened to see that she wasn't preachy about it this time and putting the burden of recycling squarely on consumers.  I absolutely agree that the industry really needs to overhaul its packaging to make recycling more feasible, especially nail polish - with the exception of Zoya, most companies do not make it easy.  And given that nail polish is considered hazardous waste, it has to go to a dedicated facility.  So, overall I must conclude that it's good an artist is calling attention to the issue.

What do you think of both these artists?  As with nearly all Makeup as Muse artists, I would commission them in a heartbeat to create unique pieces for the Makeup Museum if it occupied a real space.  :)