Letting the sunshine in with Dolce & Gabbana's Sicilian Bronzer

Sooooooo glad I was able to snag this Dolce & Gabbana bronzer!  As of right now it's sold out everywhere in the U.S. and going for double the retail price on ebay, which I find to be pretty obnoxious.  (It's still available at Harrod's but shipping to the U.S. is steep.) In any case, the colorful design is borrowed from part of D & G's spring/summer 2016 fashion collection, which in turn is based on traditional Sicilian "carrettos" - handmade donkey carts.

I really can't stop staring at it.  So many details! 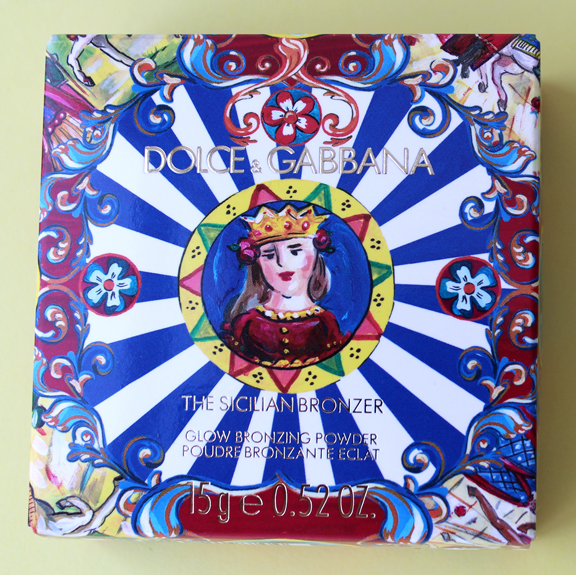 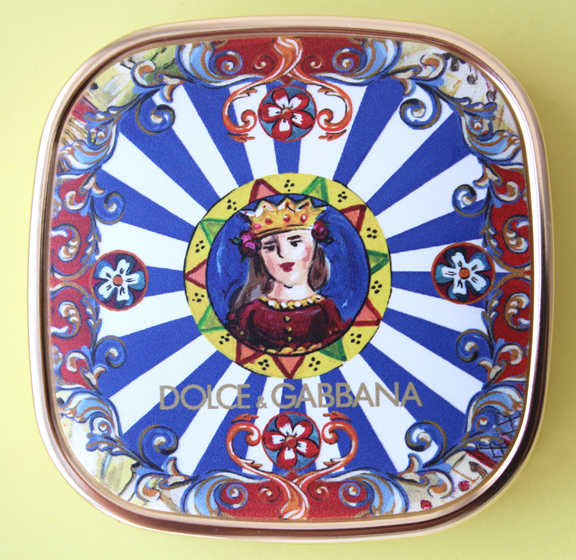 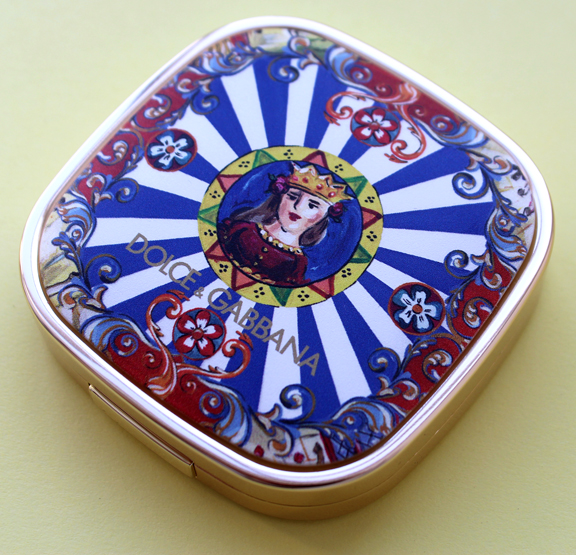 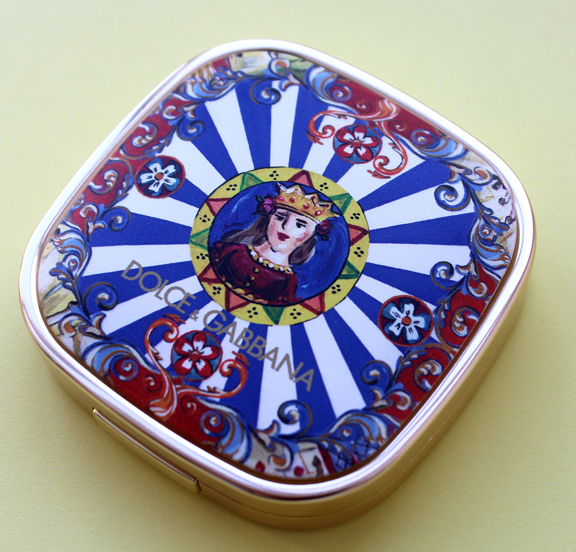 A closeup of our little lady friend: 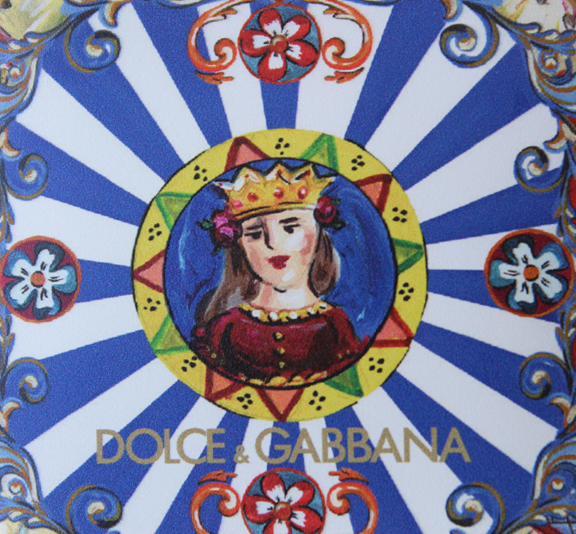 Here's the bronzer itself, in case you're curious about the shade.  It's #30 (Sunshine). 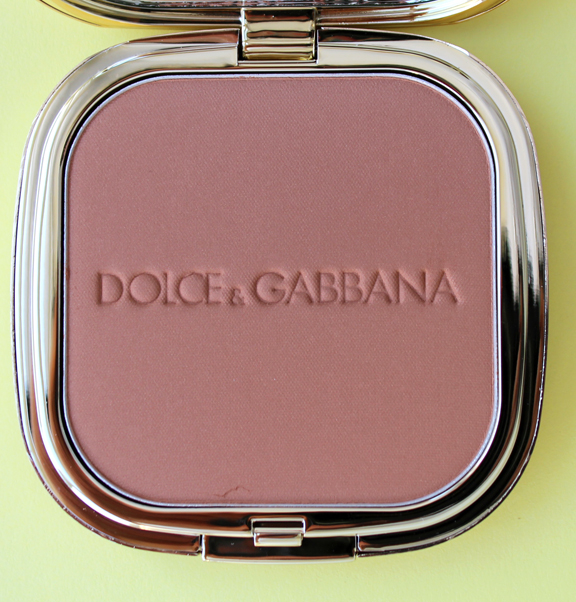 A few of the carretto collection pieces made it onto the D & G runway. 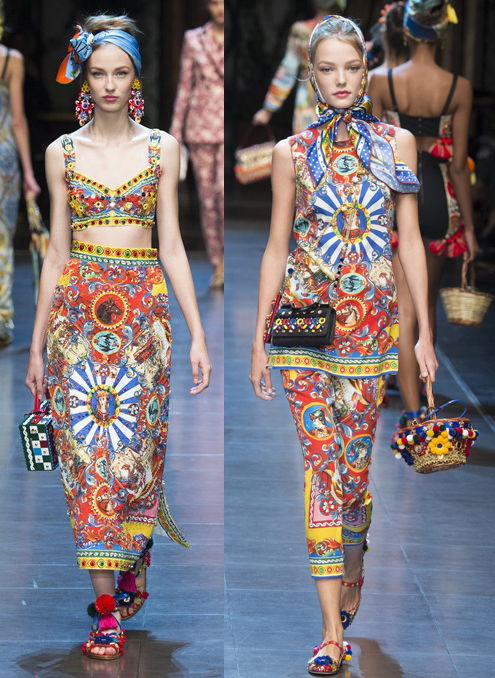 But at their website you can see the entire collection, which is way bigger than I thought it would be.  Some of my favorite pieces: 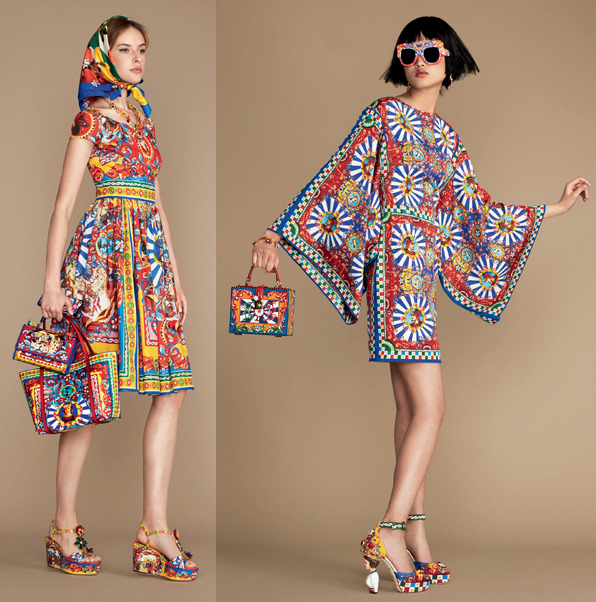 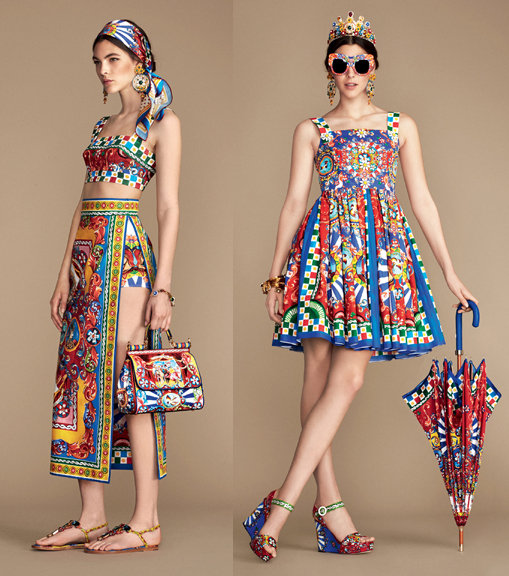 What I loved is that D & G presented a great history of the carretto, so you can tell it was definitely a well thought-out collection.  I don't want to rehash the whole thing, but basically these carts were in use at least as far back as the early 19th century, and typically utilized to transport everyday items like lumber, grains, lemons and wine barrels.  The custom of painting these carts stemmed from several things: a practical solution to help protect the wood from damage, superstition (most carts were adorned with religious figures), and, if they were commercial carts, a way to advertise.  Styles varied from town to town, but all shared bright, vibrant color and patterns. 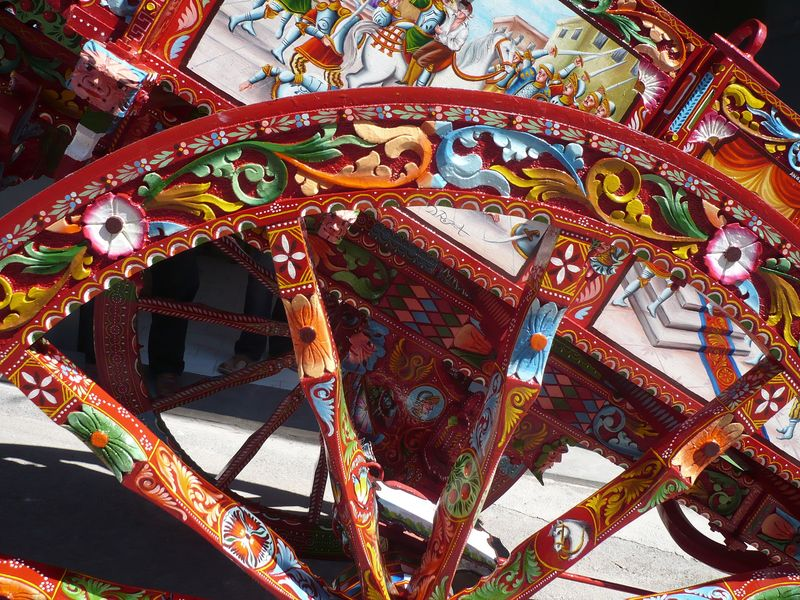 I think I spy mermaids on each side of this one! 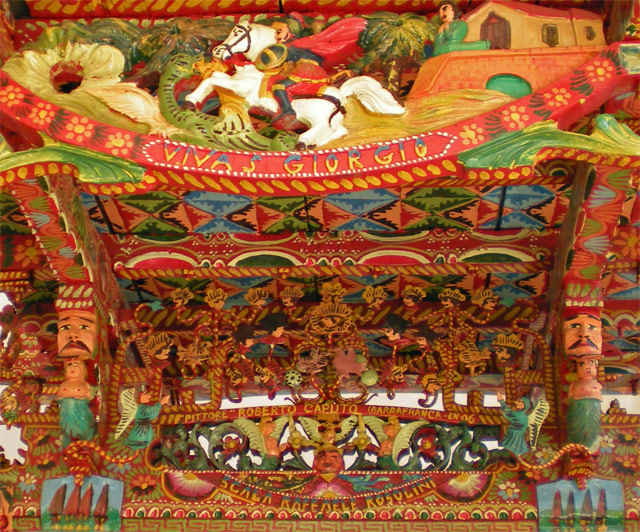 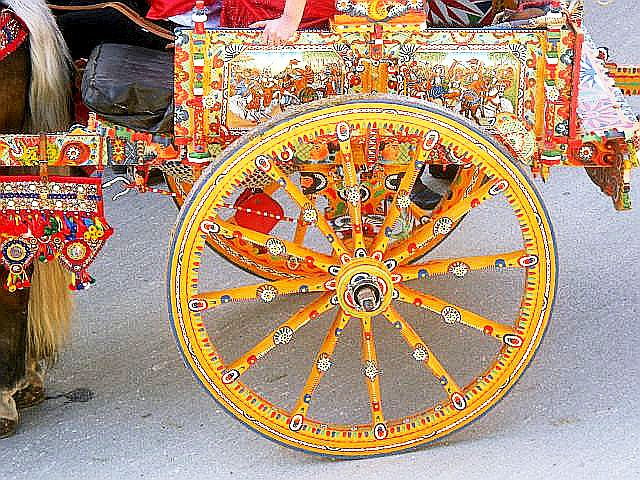 Nowadays the carts aren't used for anything but tourist attractions, but I'm glad some artisans are still painting and keeping the tradition alive.  (You can also check out this site for another brief history.) 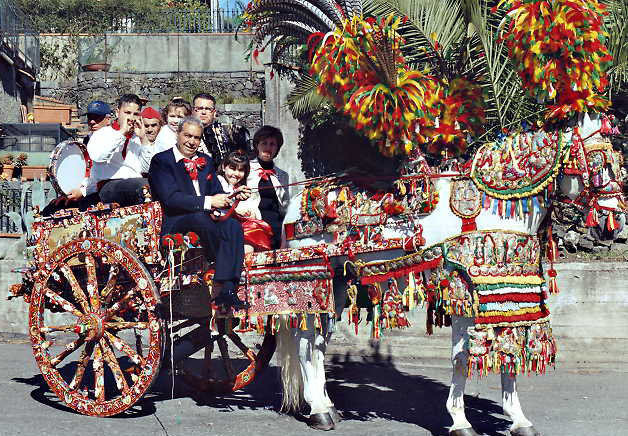 D & G's passion for Sicily's culture is, as with their coin palettes, made abundantly clear in their description of the carts - I actually found it to be the most informative piece in my online search.  I also appreciated that it's a new spin on an old theme; this is not the first time the company has used the carretto as inspiration.

As we look at some more cart photos, you can see the resemblance between them and D & G's adaptation.  Some of the bags, for example, are  high-fashion versions of traditional Sicilian coffa bags, which typically share their pompom decorations with the horses that pull the carts.  The influence also spread to a pair of flat sandals. 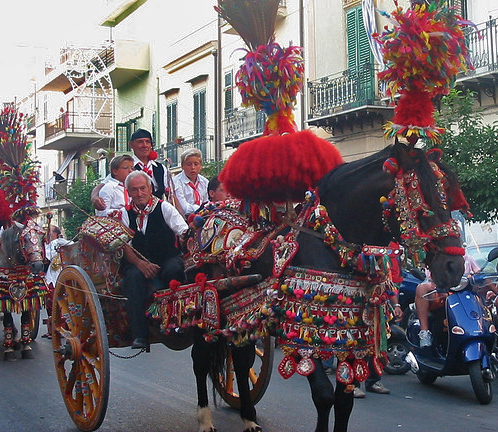 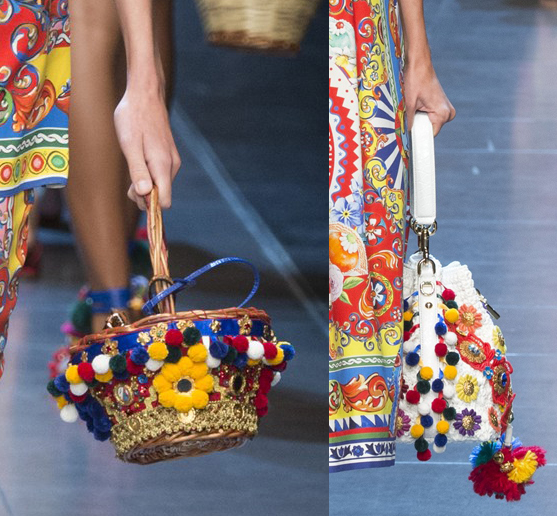 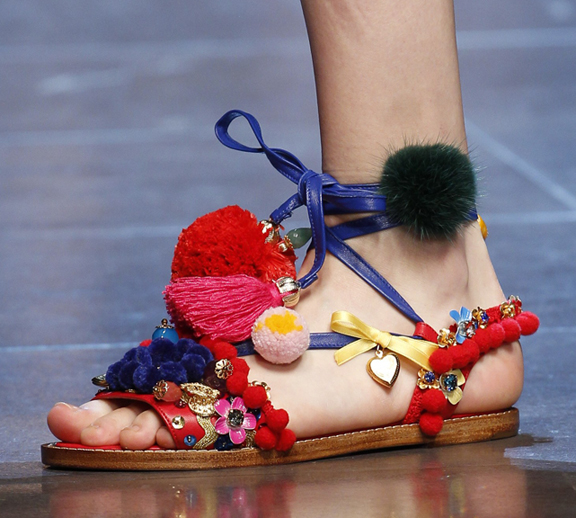 Meanwhile, the carved figures on the wheel spokes and other areas served as inspiration for the heels. I just wish they had worked in a mermaid somehow! 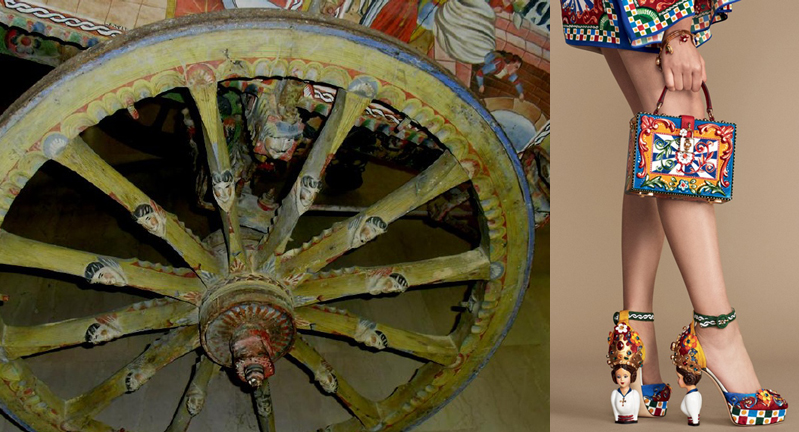 (images from academia.edu and dolcegabbana.com)

D & G's decorative patterns overall look like the interiors and side panels of the carts.  Check out these examples from the Museo Carretto Siciliano in Palermo (yes, there is an entire museum devoted to these carts - actually, there's also a second one!) 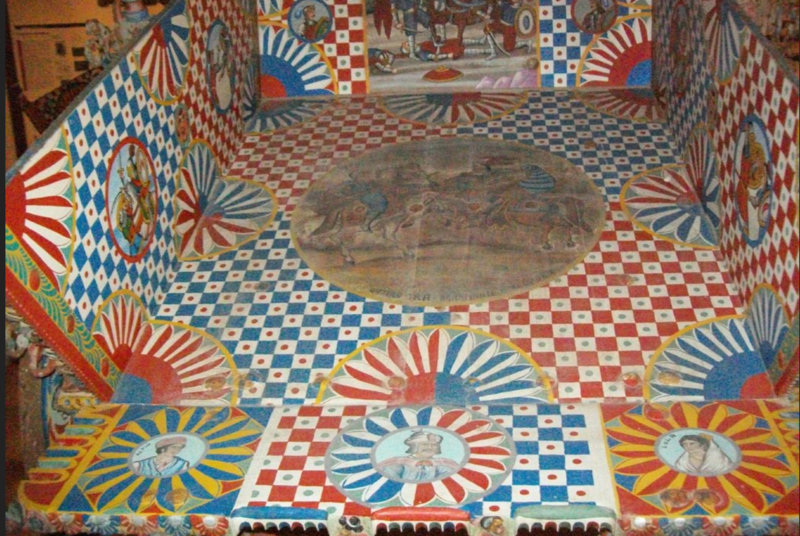 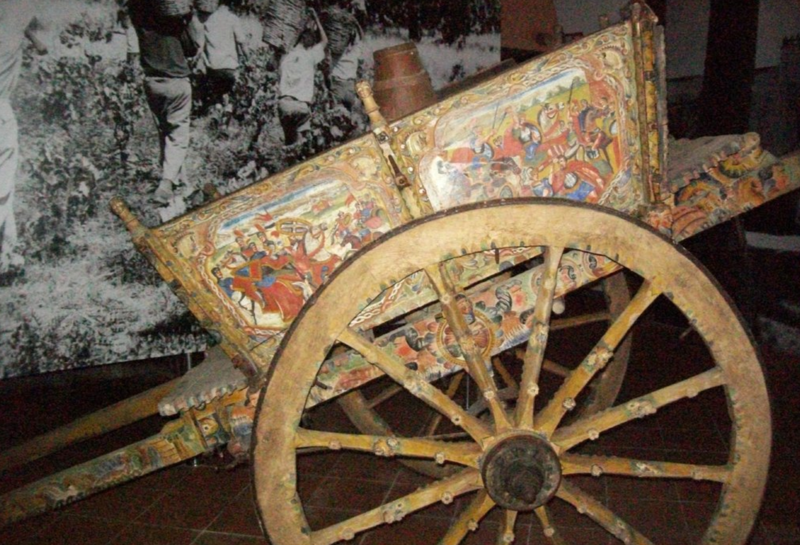 The knights refer to those in Sicilian puppet theater.  Sicily apparently has a medieval/chivalry-themed folk tradition, according to this book, so the theaters and carts share the motif as they are both part of the same history. 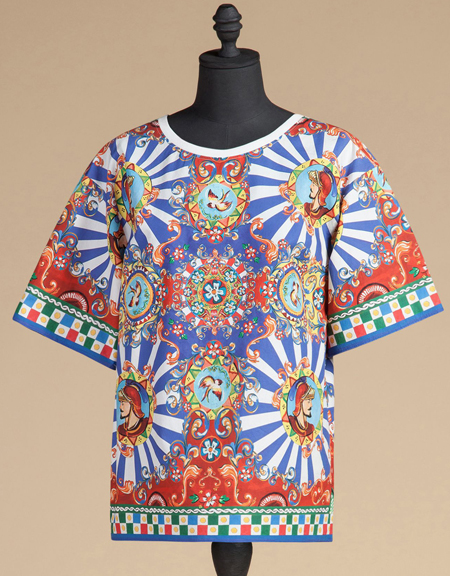 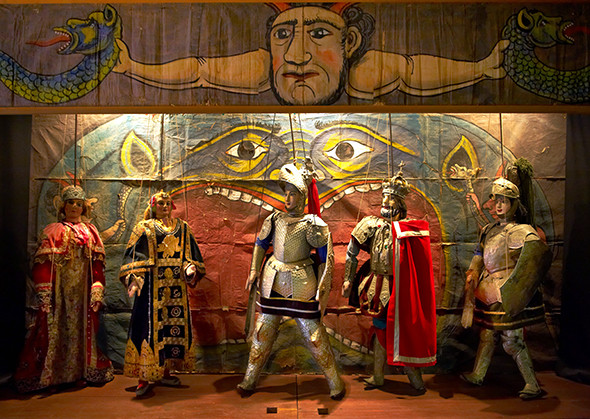 As for the little lady in the center of the bronzer, I'm guessing she's some sort of a queen based on this photo of the Puppet Theatre.  I spy a queen on the left with a crown and red dress, just like the one on the D & G pattern. 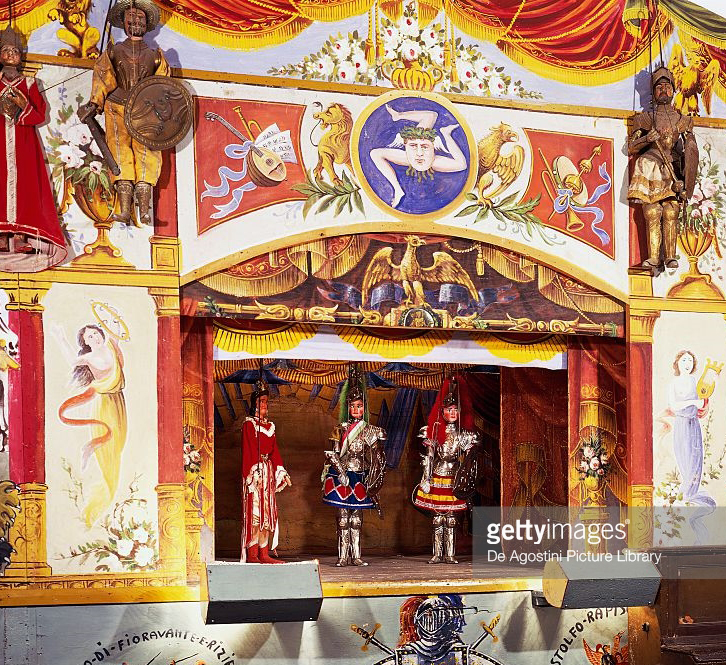 Incidentally, for the holidays D & G expanded the carretto line to Christmas ornaments, candles, stationery and more recently (and most astonishingly) a collection of 100 hand-painted Smeg refrigerators completed by 8 genuine Sicilian cart artists.  That would add quite a pop to your kitchen! 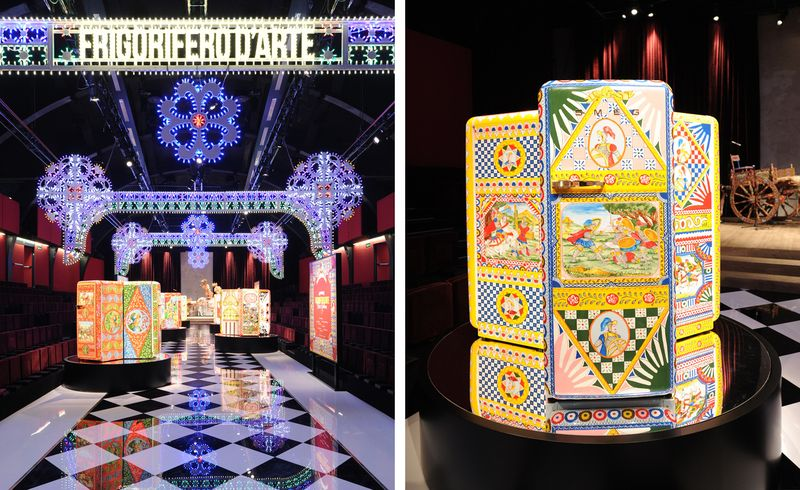 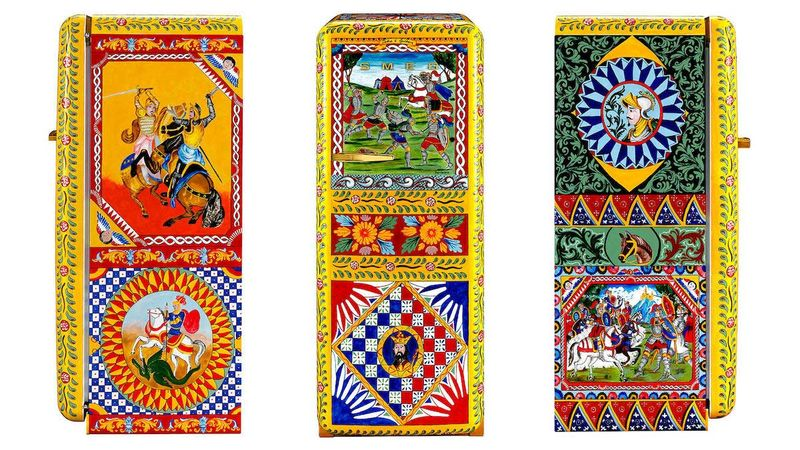 Overall, I am seriously in love with this bronzer.  I always enjoy learning, especially through makeup, about some cultural practice or artist that I wasn't aware of previously.  Plus, so few couture houses' makeup have such a specific connection to their fashion - in the case of Chanel and Dior, it seems rather vague and uninspired as of late, and don't get me started on YSL - their Chinese New Year palettes were not a full comeback.  D & G goes the extra mile to ensure that the makeup collection aligns with the clothes.  (Although I do find it odd that they used the carretto as a springboard for the makeup line, but the model for the beauty collection's promos is wearing the lemon print, also from D & G's summer collection.  Why not wear something from the carretto collection?  Eh, I guess it's not important.)  More than that, the original culture behind the fashion itself appears to be at least somewhat researched.  This is what gets me excited - to see aspects of a particular culture that are celebrated and modernized, and that the designer takes care to explain the history behind their designs.  It's a stark contrast to, ahem, other approaches.

So what do you think of this bronzer and D & G's take on carretto style?