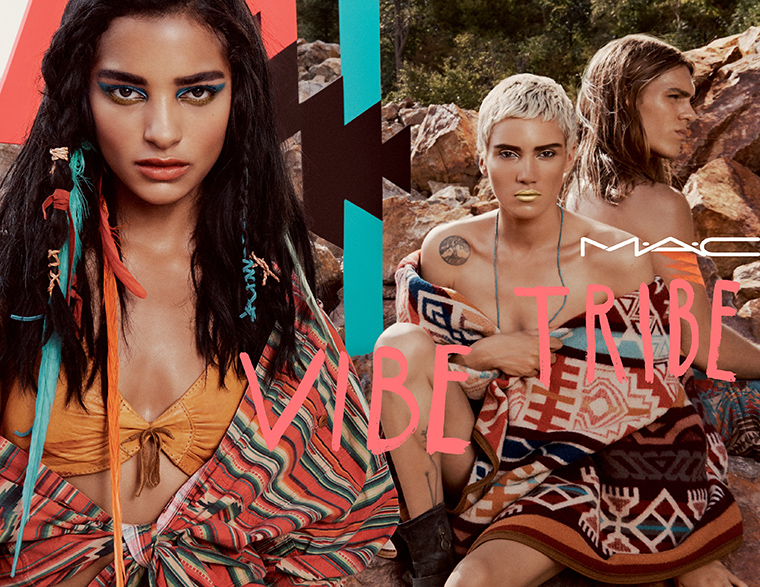 I hate to open this can of worms, especially since I can't add much original thought to the controversy surrounding MAC's new Vibe Tribe collection, but I thought it was at least worth summarizing the points and counterpoints.  MAC's latest lineup urges us to "join the tribe" and "feel the vibe."  Which tribe, exactly?  Who are these women in the promo with feathers in their hair and derivative amalgams of vaguely Native American prints?  I don't think they belong to any particular tribe, at least not any that MAC is willing to admit to.  The company maintains that "the collection, including the visuals, product lineup, and naming, is inspired by art, outdoor music festivals, and the colors of the desert...[it] has absolutely no connection to nor was it inspired by the Native American cultures."

I have issues with this defense for several reasons.  One is that in both the promo and the pattern on the packaging there is an undeniable Native American influence, what with product names like "Arrowhead" and "Adobe Brick", but MAC refuses to acknowledge this.  As Nylon magazine explains, "It’s hard to believe the company could be this naive when the very patterns used on the product packaging appear to be Chinle and Ganado designs—traditional Navajo weaving patterns—rooted in generations of history.The word 'tribe' is also closely linked to Native American culture, making the collection seem iffy even by first glance, never mind when MAC’s refute is taken into equation. Additionally, the names of some of the products themselves also raise eyebrows—naming a lipstick shade 'Arrowhead,' for instance, is cringeworthy at best, especially when you deny there being any link." 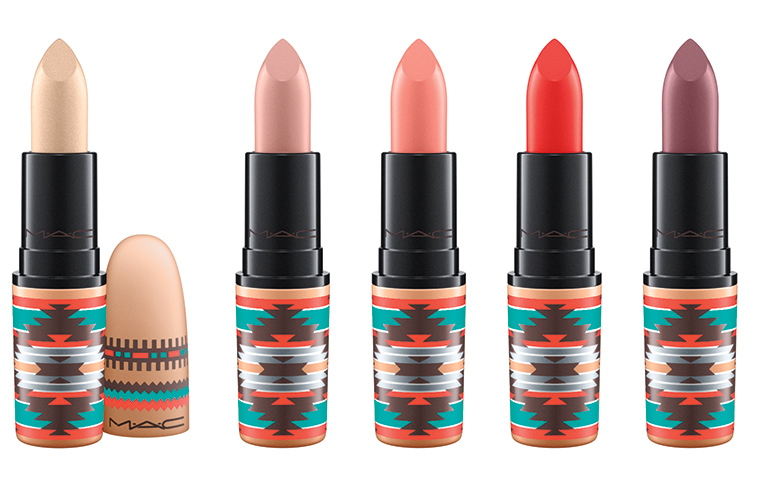 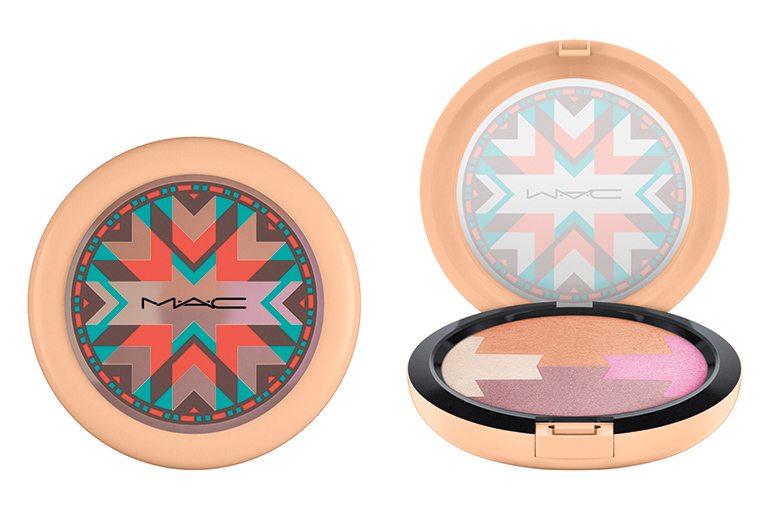 Two, even if the collection is solely inspired by "outdoor music festivals", that's problematic since such festivals have historically been ground zero for cultural appropriation, with several festivals going so far as to ban headdresses.  As one Reddit user says, "[The] problem with that is the patterns and textiles and designs they're referencing from Coachella, Burning Man, and other festivals are the same patterns/textiles/designs that were appropriated from indigenous peoples. Just because it festivals and festival-goers did it first doesn't mean it's not appropriation. If anything, that makes it worse, because they're attributing our designs and patterns to Coachella and Burning Man and other festivals - as though they were not ours for thousands of years before these festivals."

Third, this isn't the first time MAC has done this - check out my post on cultural appropriation in cosmetics for proof.  One Twitter user also noticed this and took a screen shot of my post (didn't include a link to my post in his tweet, which I would have appreciated but what can you do.)  You think MAC would have learned.

But is it really so bad?  Many have argued that MAC is simply celebrating Native American culture and the pattern is merely a Southwestern motif, nothing more.  Another argument is that "it's only makeup" and that there are more pressing things to take issue with, a.k.a. the old it's-just-uppity-people-looking-for-things-to-be-offended-by argument.  I'm going to go ahead and counter their counter-arguments.  First, when you proceed to lump distinct Native American tribes together, that's not appreciating them, it's appropriating.  And Southwestern motifs aren't in and of themselves bad, but when you add words like "tribe" and show images of women with feathers in their hair and "tribal" tattoos, it's clearly referencing a Native American stereotype rather than "Santa Fe style". Second, just because there are bigger injustices doesn't diminish the topic at hand.  We can be concerned about, say, the higher-than-average rate of sexual assault among Native American women and this MAC collection simultaneously - they're not mutually exclusive.  Finally, the "it's only makeup" thing really gets under my skin.  Obviously I'm biased since I think makeup important enough to belong in a museum and in academia, but when you also realize that color cosmetics is projected to be a nearly $8 billion industry by 2020, you can't deny the significant impact it has on culture.

As a final thought, as Christine at Temptalia so astutely points out, MAC had a great opportunity to partner with an actual Native American artist to create a one-of-a-kind design and use the proceeds to go to their specific tribe.  A similar example would be Shu's 2016 Chinese New Year cleansing oils, where they collaborated with one of China's leading kite artists to bring attention to the dying craft of traditional kite making.  They didn't just slap on some generic Chinese kites that you can find anywhere; rather, they partnered with an artist who created a unique pattern for the packaging.  In this way they honored Chinese kite-making heritage instead of appropriating it.  What MAC did with Vibe Tribe was quite different.  At worst, it was cultural appropriation; at best, it was incredibly thoughtless and uninspired.  As one Instagram user pleads, "Release me from this 80's Tucson gas station hell."

I can't say I've ever been to a gas station in Tucson but that comparison seems pretty apt.

What do you think?  And to those of you who don't find the collection problematic, do you see any difference between what MAC did and the example by Shu Uemura I provided?