Once again I stumbled across something very interesting but also completely unrelated to what I had been searching for.  In this case, it was an 1890's ad for Harriet Hubbard Ayer's Récamier Cream.  I was intrigued by it since it reminded me of a painting that I had looked at in my art history days in college, but couldn't quite place it. 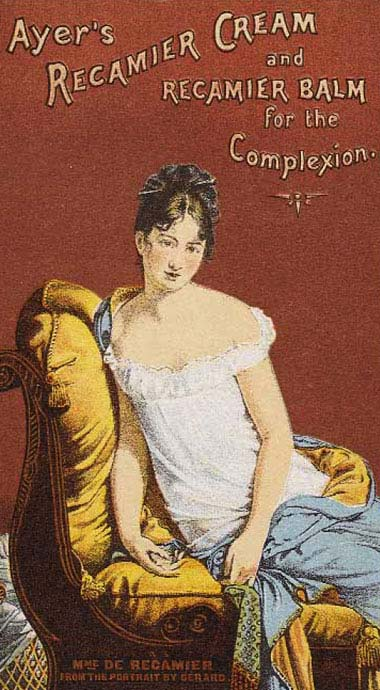 Fortunately, Cosmetics and Skin refreshed my memory.  The image for Ayer's ad was taken from this 1802 painting of Madame (Juliette) Récamier by François Gerard. 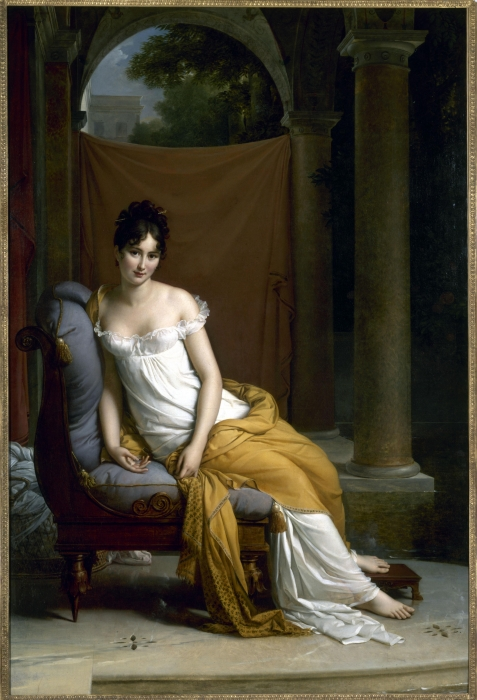 Known for her great beauty, graciousness and tact, Madame Récamier was the Napoleonic era's "it girl", ruling French society from the late 1700s until her death in 1849.  New York-based entrepreneur Harriet Hubbard Ayer saw an opportunity to capitalize on her beauty approximately 40 years after her passing.  This is the summary of the skincare line's origins from Cosmetics and Skin:  "In 1886, Harriet Hubbard Ayer founded the Recamier Manufacturing Company at 25 Union Square, New York. Incorporated in 1887, the company’s product range addressed most of the beauty concerns of the day. The cosmetics were restricted to skin-care and did not include decorative products such as rouge or lipstick – these were still considered to be ‘paints’ and therefore unsuitable for general use in polite society. The company therefore produced, marketed and sold ‘toilet preparations’ rather than ‘cosmetics’...The recipes for her skin care products were claimed by Harriet to have come from a French countess said to be a descendant of Madame Jeanne Françoise Julie Adélaïde Récamier, a well known beauty from Napoleonic times. The recipes that Madame Récamier’s used had supposedly been handed-down to the countess and she sold copies to Harriet. The concoction of this story was a great marketing idea by Harriet as it gave her company a name, a visible symbol of beauty, and some supposed ‘beauty secrets’ from France, the centre of fashion and beauty at the time.  Another version of the story states that on a trip to Paris, Harriet visited a certain M. Mirault who made the Parma Violet Perfume she used. M. Mirault had a formula for a skin salve his grandfather had made for Julie de Récamier and he sold it to Harriet for a ‘tremendous price’.  A third explanation for the origins of the cream came in 1889 when Harriet was sued by Lutie Frenzel. Lutie suggested that the French-made cream had been analyzed by a New York chemist and subsequently copied."  That's the story in a nutshell, but there's also quite a thorough history of Ayer's use of Madame Récamier's name and reputation to sell skincare in Annette Blaugrund's wonderful biography of Ayer, "Dispensing Beauty in New York and Beyond: The Triumphs and Tragedies of Harriet Hubbard Ayer" (which I have just added to my book wishlist!)

Anyway, as you can see from the ads below, the Récamier line encompassed a variety of products, from balm and cream to powder and soap.  There was even a lotion designed remove "moths [moth patches] and freckles". 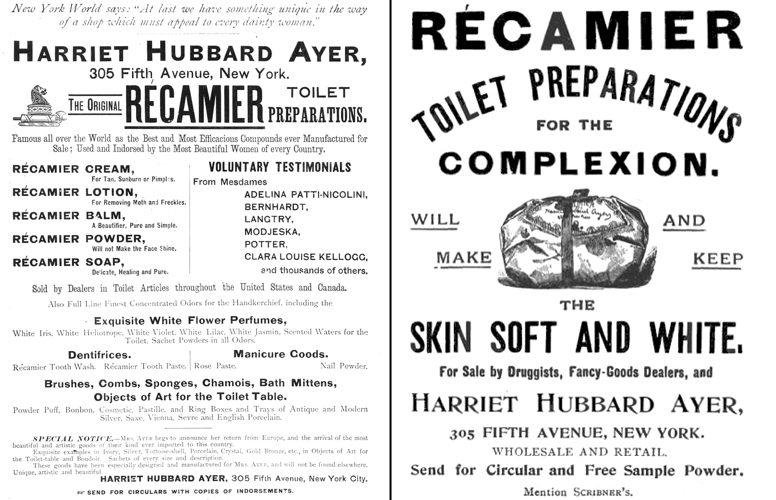 What I'm curious about is how Madame Récamier established her reputation as a legendary beauty and the most charming, courteous socialite of her time. Was she really that gorgeous, her skin that flawless?  What was it about Madame Récamier that resulted in an enterprising beauty mogul essentially exploiting her name to sell skincare nearly 40 years after her death?  I just had to find out more about this woman's mystique.  Here are some historical accounts.

"It is probable that the keen appetite for all social enjoyment, sharpened by the long privation caused by terror, war, and famine, much increased the effect that Madame Récamier's beauty produced.  The few survivors from those days can scarcely find words to express the rapture she excited in a large and mixed public.  By the revolution all distinctions of rank had been not only abolished but forgotten; every one pushed on pell-mell to see the beauty; and some few remember being half crushed to death in the Tuileries by the suburban crowds who would have a look at her."

"She was a compound of ingenuous gracefulness, talent and goodness, harmonized by that delicacy which alone forms the charm of loveliness.  I have often discovered a resemblance between her and the Madonnas of the pious Italian painters; but this resemblance was purely intellectual.  It proceeded not from regularity of features, but from that soul which animated her eyes and beamed forth from under her long eye-lashes, and from the high and intellectual forehead, blushing under its fillet of leno, the only head-dress with which, for many years, she set off the charms of her countenance.  In the smile which so often separates her lips of rose, you might perceive the innocent joy of a young and ravishing creature, happy to please and be loved - who saw nothing but bliss in nature, and answered the salutation of love which met her on all sides, by an expression of silent benevolence...in England Madame Récamier encountered the same enthusiasm.  There was always a crowd wherever she passed.  The charm, whose power I have before expressed, has the same magic influence among all nations."

"She was at once graceful and exquisitely modelled, her neck was admirable in form and proportion, her mouth small and vermilion, her teeth pearly, her arms charming, albeit somewhat spare, her chestnut hair curled naturally, her nose was delicate and regular, especially French...her walk was that of a goddess on the clouds.  Such was Madame Récamier at eighteen years of age.  The appearance of a young person so pre-eminently beautiful in public caused, as may be imagined, a prodigious sensation...she was declared la plus belle à l'unanimité."

After reading these I decided I wanted more visuals since, as they say, the proof is in the pudding (or in this case, the portrait.)  While some portraits depict idealized representations of their sitters, I think these give a fairly realistic picture of Madame Récamier.  We'll start with a close-up from the Gerard portrait.  Rather lovely, yes? 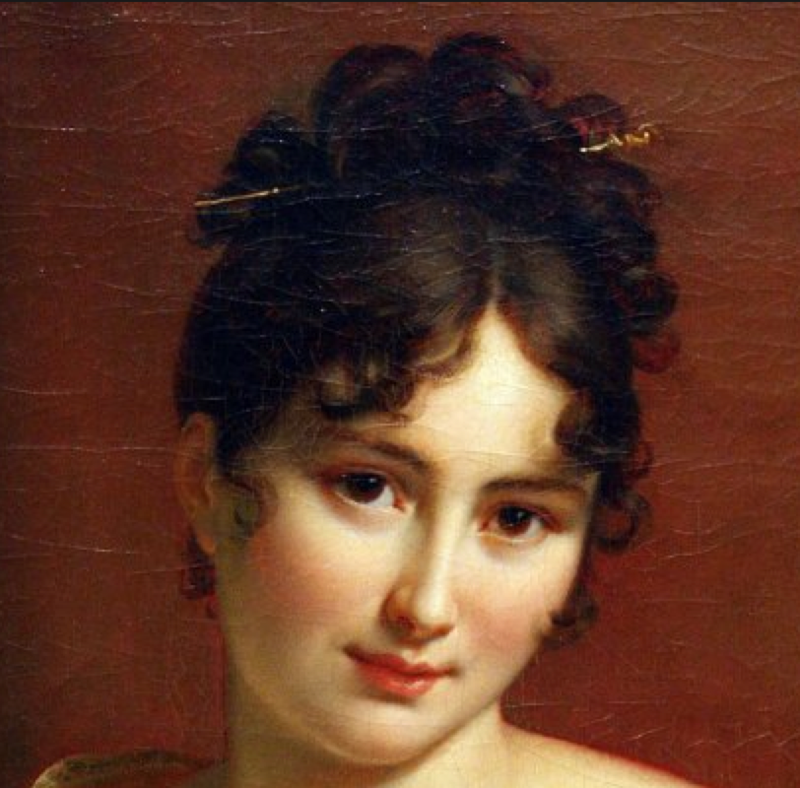 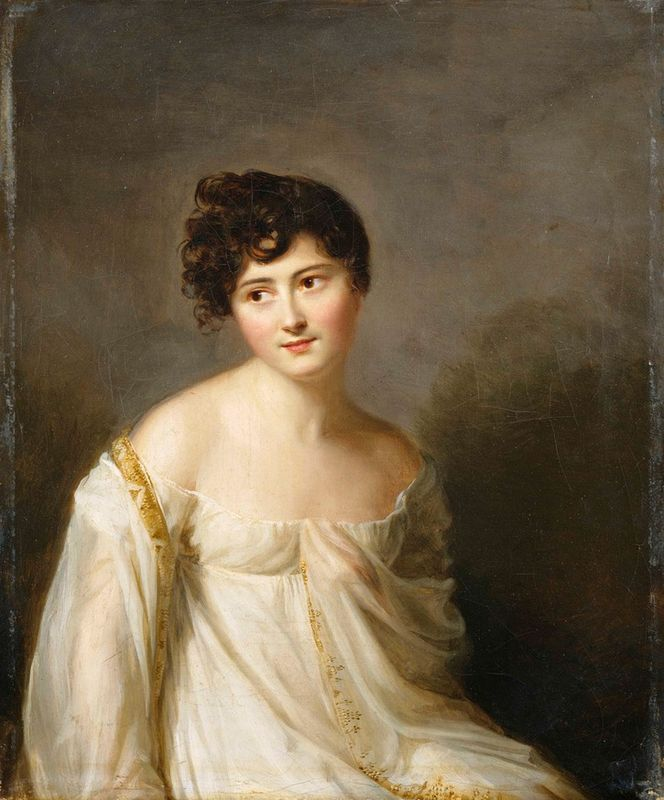 Back in time to a portrait painted around 1798: 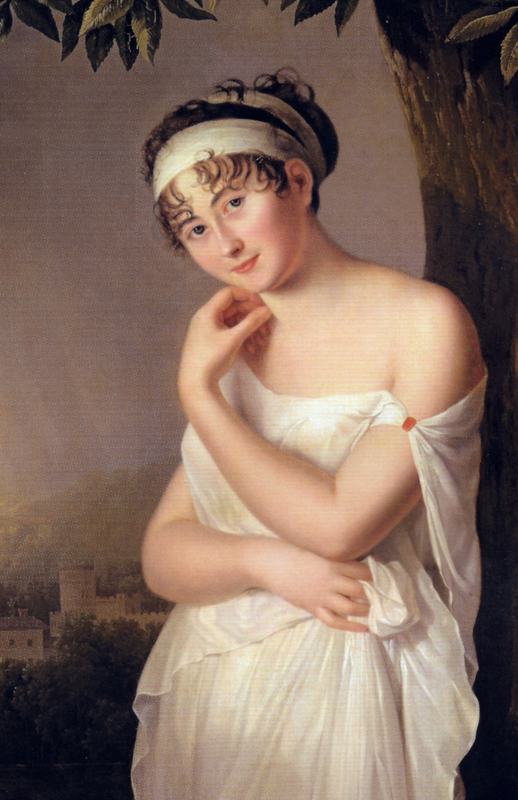 And of course, we can't forget Jacques-Louis David's iconic portrait of Madame Récamier, which inspired both a sofa style and a rather unsettling Surrealist work by Magritte.  (Interestingly, this is an unfinished portrait.  Madame Récamier had commissioned David to paint her portrait, but after finding that he worked too slowly for her taste, she had David's pupil Gerard to repaint the portrait.) 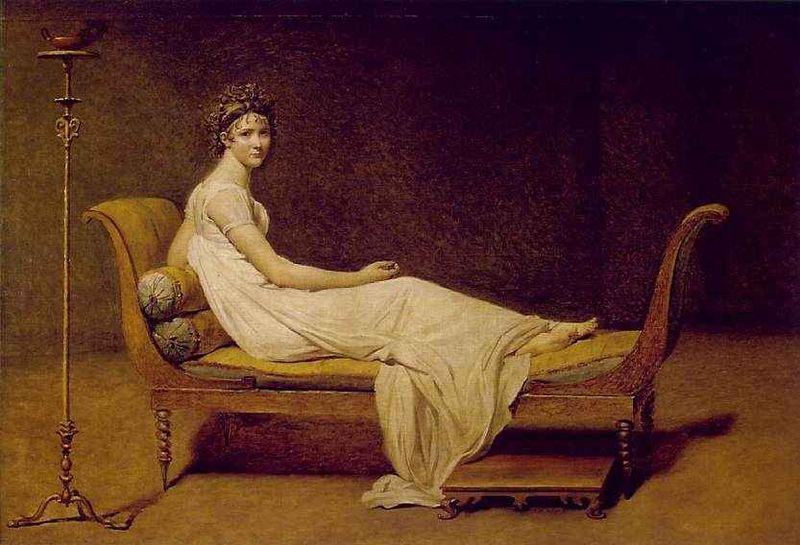 Given all we've seen and read, I think if I had existed in Ayer's time, I would have bought the Récamier cream in a heartbeat if it meant even approximating her skin.  Alas, the claims for Ayer's skin "preparations" were debunked by the Boston Journal of Health in 1902.  There were even accusations of harmful ingredients such as "corrosive sublimate," which was made from mercury.

Despite the fact that Ayer's Récamier line fizzled out by 1920, the original Madame Récamier continues to inspire today.  Take, for example, the moody, slightly goth twist on the lady's look at Kinder Aggugini's spring 2010 show.  I especially love it with the modern Empire silhouettes. 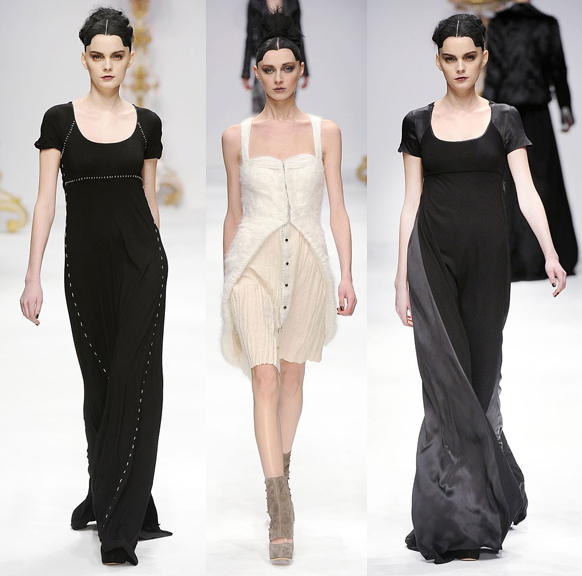 While the eyes and lips took a dark turn, the skin was still perfect and glowing - exactly how you'd imagine Madame Récamier's healthy, youthful complexion.  The disheveled hair, I think, is a nod to Madame's crop of wild curls. 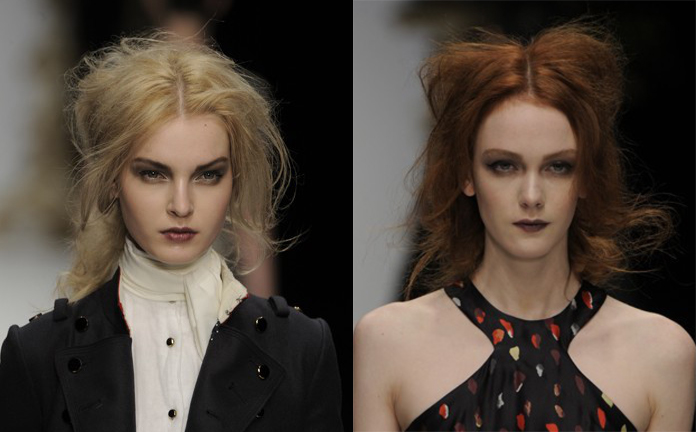 I also think we see a little bit of Madame Récamier in Ladurée's line.  While Ladurée does not verbally refer to Madame Récamier, there is a picture of her from Gerard's portrait at their website.  Additionally, the overall style is reminiscent of the beauty ideals of the Napoleonic era, ideals which Madame Récamier shaped and was the undisputed leader.  The brand story states, "[Les Merveilleuses were] beautiful 'goddesses of liberty' who lived in Paris after the Revolution in the late 18th century and pursued their own beauty depending on a unique and individual sensibility.  In the 18th century young Parisian women cast off the post-revolution reign of terror and strict morals, aspiring for freedom and liberation. They remained loyal to France and believed in their senses without losing the pride of the aristocrats who lived in the period of the monarchy.  Merveilleuses (French) refers to a 'marvelous,' eccentric and elegant woman."  This description, combined with the illustration and small picture of Madame Récamier, definitely point to her continuing influence. 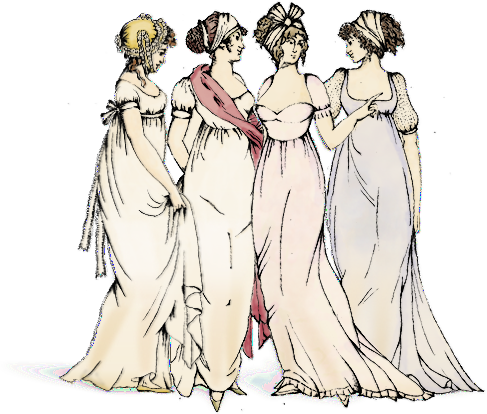 What do you think?  Would you have wanted to be in Madame Récamier's circle?  I must agree that she's rather exceptional beauty-wise, and while I tend to see modern-day socialites as vapid and/or pretentious, I think I would have wanted to hang out with Juliette.  I also think she may have been disappointed at her image being used to sell skincare, but would have, no doubt, been rather polite about it.  :)