Quick post: An Estée Lauder compact museum: It DOES exist!

Or at least, it did.  In June 2014 the Northpark Neiman Marcus in Dallas opened an in-store Estée Lauder shop, and to celebrate the occasion, showcased nearly 60 of the company's limited-edition compacts.  I'm not too keen on the idea of having a compact exhibition in a retail setting, as it's simply an attempt to get people to buy things rather than appreciating the pieces on display and the history of the company.  I also didn't think too much of the cases and clear cylindrical mounts, which came across like those you'd find in a run-of-the-mill jewelry store. *cough tacky cough cough* 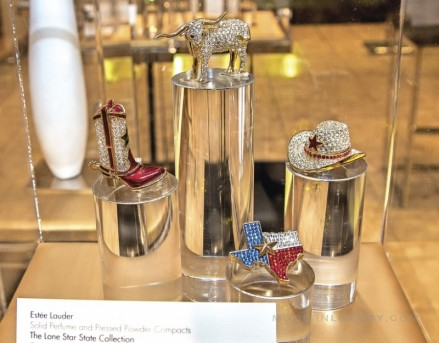 Having said that, at least these items got out of storage for a bit - most of them had probably never been seen by the public since they were originally released.  (In 2001 Estée had an exhibition of their solid perfume compacts at another Neiman Marcus in Florida, but not their powder ones.)  Also, this lucky lifestyle blogger who attended the event got exclusive access to ads and photos from the Estée Lauder archive, so go check them out.

I had high hopes for these items to keep traveling, so after not finding any additional information I emailed Estée Lauder regarding the current whereabouts of this alleged museum.  I received no response, which is pretty obnoxious.  If customer service reps don't know about it they could try to find out from the higher-ups, or if the company is no longer maintaining this little project they could have at least replied with that.  I mean, someone there must know what happened to it!  I guess I'll just have to keep my eyes peeled to see if it ever pops up in other stores at some point.

Have you spotted this museum near you?  What do you think of the displays' aesthetics?

Posted at 10:29 AM in Estee Lauder, Exhibitions and museums, Vintage | Permalink | 0 comments