Who's ready for a super huge mega catch-up edition of Curator's Corner?

- Latest hair trends include denim hair and funfetti hair.  But if you think those are crazy, check out these fur, pom pom and stone manicures.  I'm team fur nails all the way, since they remind me of plushies.

- In other nail news, some New York salons have been ordered to pay $1.1 million in back wages to workers.

- Spring isn't even here yet, but New York Fashion Week's tough beauty looks already have me excited for fall.

- At long last, some beauty innovations for women of color:  a new hair care line inspired by Madam C.J. Walker will be launched at Sephora, and the new Cocoa Swatches app shows what makeup shades look like on a variety of skin tones.  We still need a lot of work on diversity within the beauty industry, but these are a step in the right direction.

- On the cosmetic surgery front, butt lifts reigned supreme in 2015, while more men are getting breast reduction surgery.

- There was, unfortunately, some truly scary beauty news these past few weeks - ovarian cancer brought on by talc use and a "beauty parlor stroke", which is not as uncommon as one would think.

- On a lighter note, which of these are your greatest beauty fears?  And do you remember these "terrifying" early aughts hair trends?

- I'm excited for Abbi Jacobson's new book, which will be released in the fall.  Not so excited about this Olsen twins exhibit though. Ugh.

- In '90s nostalgia, Sarah Michelle Gellar has gone brunette to reprise her role from the 1999 film Cruel Intentions, which is getting a TV reboot.  For the early part of the decade, there was this piece on 1991's Silence of the Lambs.

- As much as I love the '90s, there were some good '80s memories to be had.  Pretty in Pink, Ferris Bueller's Day Off and Blue Velvet all celebrated their 30th anniversaries, and Pee Wee is back!  (Also, I'm giving a shout-out to the person who photoshopped him into vintage postcards.)

- I had an idea for a new Tumblr called Bored Men at Sephora, but it looks like this Instagram account beat me to it, albeit on a broader scale.

Finally, here's a bonus pic of me in Disney World - my mom caught me mid-Tweet.   It was a great trip but totally exhausting.  I think the pink ears go well with the camo jacket, yes?  (Just kidding, I know that combination looks especially ridiculous.) 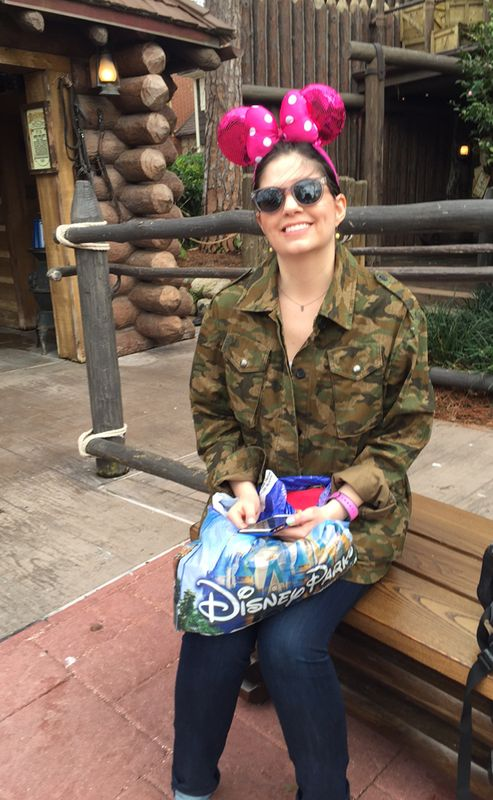 More pics will be coming soon over at Postcards from Sailor Babo - our little scamp had quite the adventure!

How have you been?