Just when I thought there were no new cleansing oils in sight from Shu, they surprised us with these two to celebrate the Chinese New Year.  If I had known these were coming I would have held off on my group portrait, but c'est la vie.  Anyway, like the Qiang embroidery patterns from 2015's cleansing oils, this year Shu honored another traditional Chinese art: kites.  The company collaborated with expert kite maker Zhang Xiaodong to create two custom patterns for the oils. 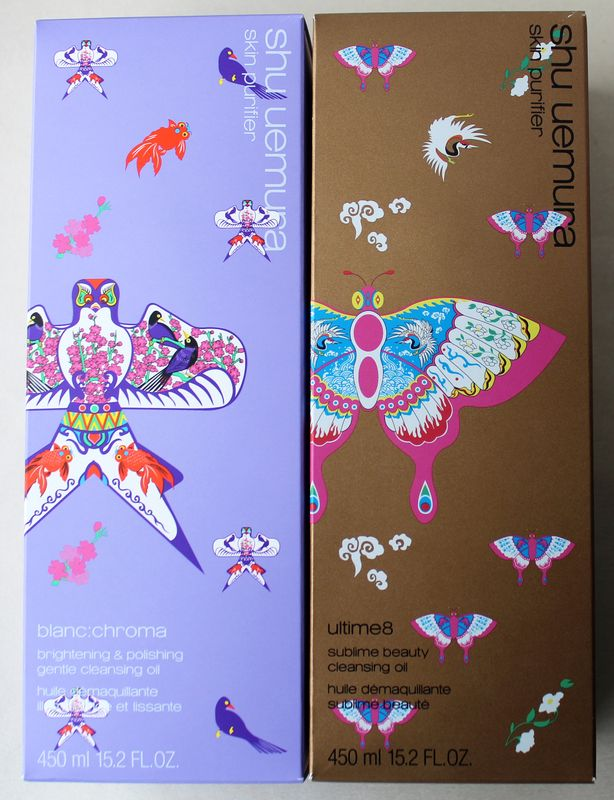 The first is a traditional "swallow" shaped kite that in this case represents rebirth.  Magpies are symbols of happiness and good luck in Chinese culture, while the goldfish signify an abundance of wealth.  I actually think the boxes for both of the oils are prettier than the bottles themselves, as they have more detail and color. 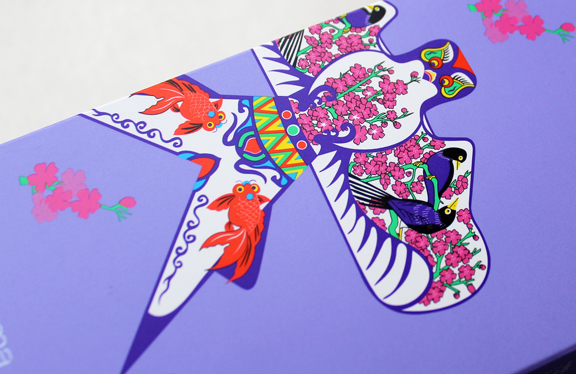 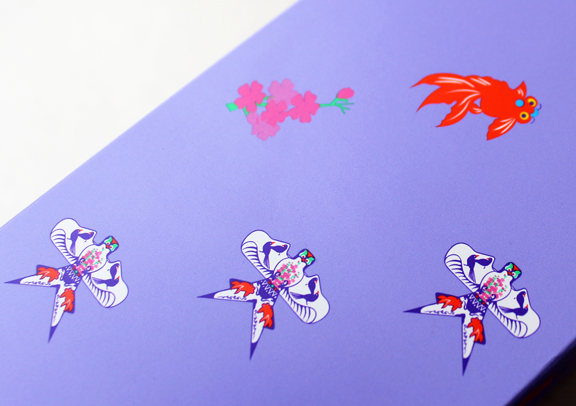 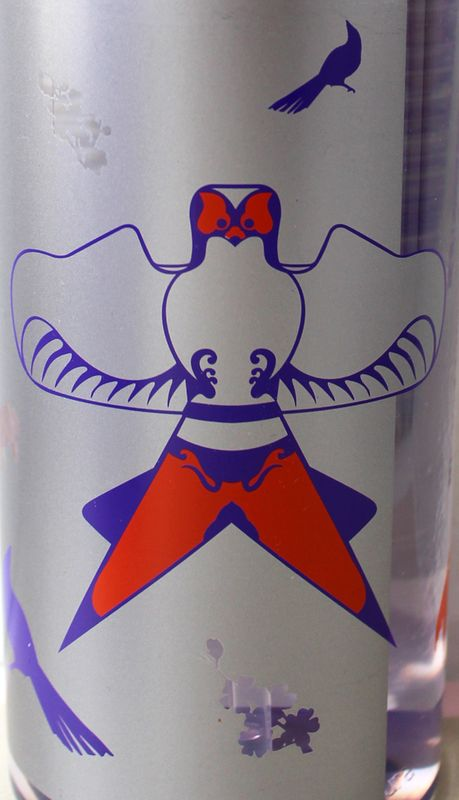 Here is the kite made by Zhang Xiaodong. 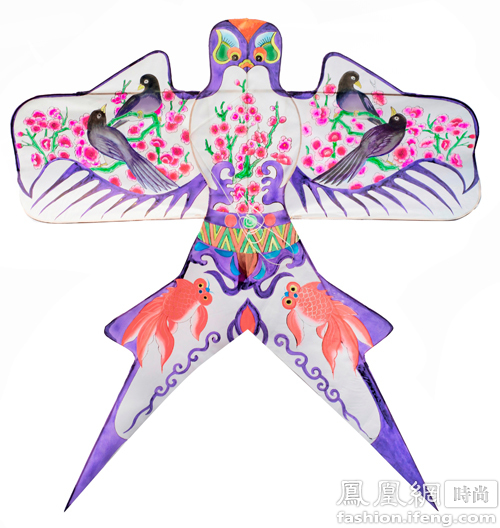 The theme of the other cleansing oil is metamorphosis, symbolized by the butterfly.  Additionally, Cranes signify longevity, while camellias represent long-lasting devotion in marriage. 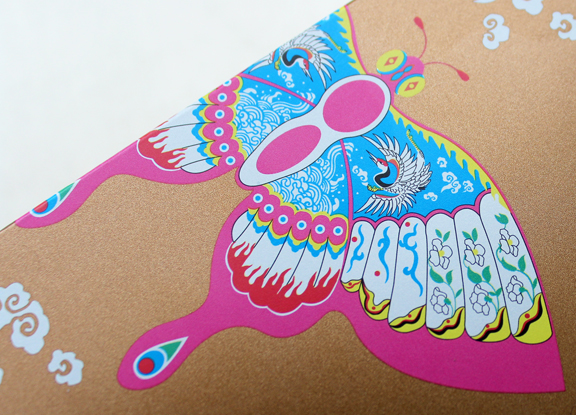 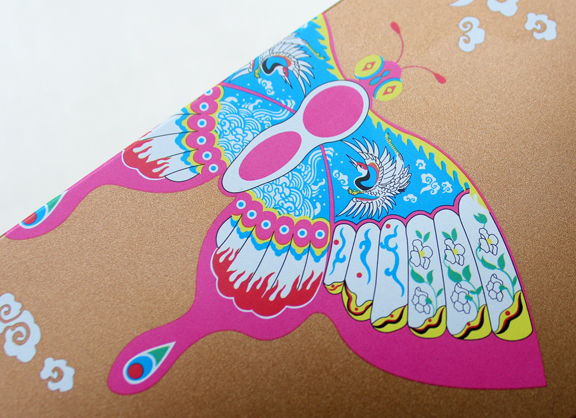 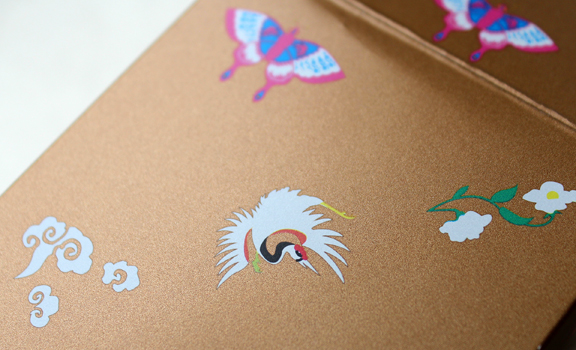 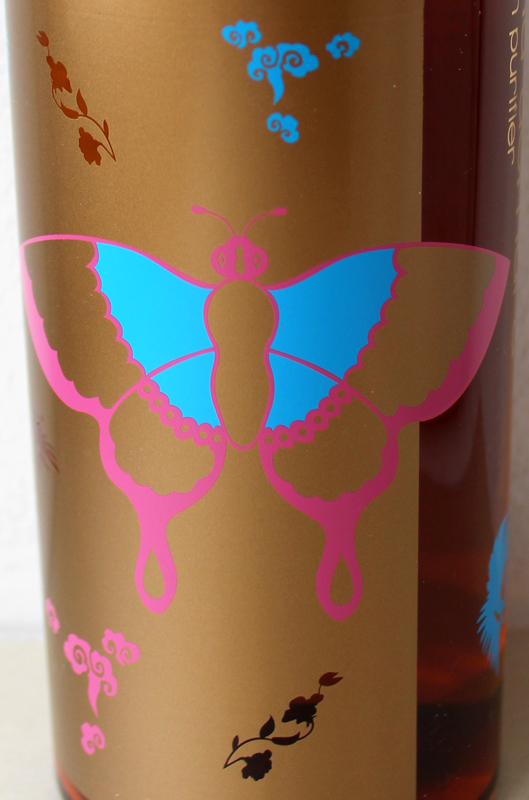 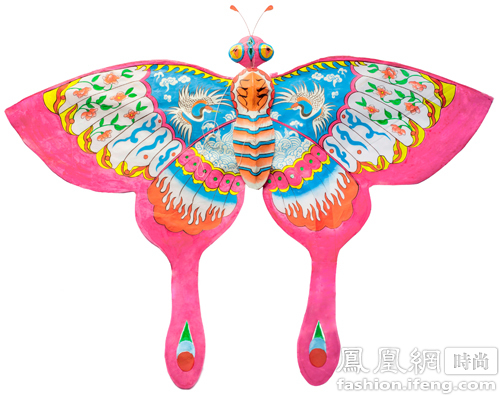 Zhang Xiaodong is one of China's leading kite artists.  He is one of a handful of aging craftsmen in China struggling to save the dying art of kite-making.  Between budget cuts for cultural heritage programs that fund kite-making and a younger generation disinterested in the practice, kite artists are challenged in keeping the tradition alive.  Zhang does his part by spending his spare time teaching children and teenagers in Weifang, the world's "kite capital", how to make kites.  Unfortunately I couldn't find any information (in English, anyway) about what inspired him to create the designs he did for the Shu collab, just some pictures showing him at work.  But both of the oils' themes - rebirth and metamorphosis - stem from the central idea of a renaissance of sorts, so I'm interpreting the designs as an expression of the artist's hope of breathing new life into an art form that's fading away.

Traditional kites are made by hand-painting pieces of silk and attaching them to bamboo frames, which you can see a bit of below. 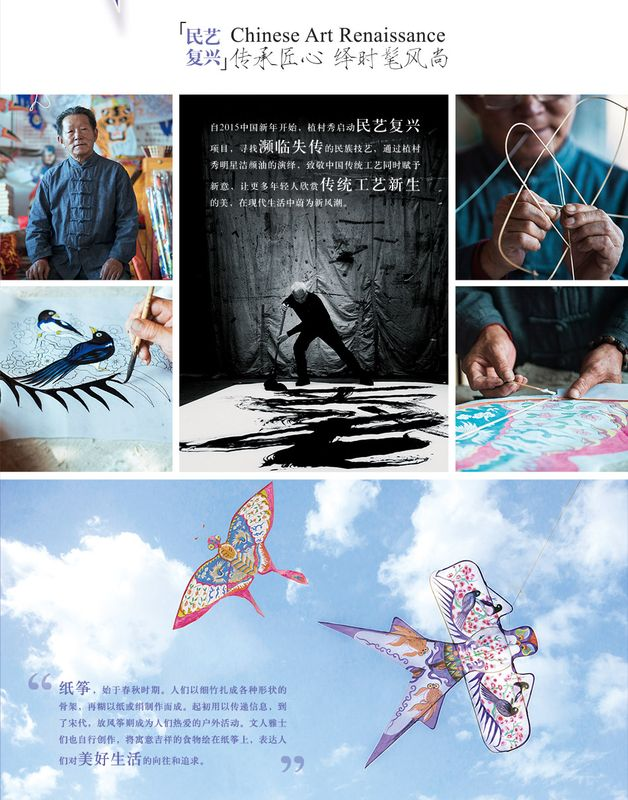 From I was able to piece together here, Shu also collaborated with 19 year-old Chinese singer Dou Jing Tong  (a.k.a. Leah Dou) to help bridge the gap between youth culture and the historic art of kite-making.  Dou was interviewed in this video and some background information on Zhang was provided.  (Alas, it's all in Chinese.)  Additionally, Dou released her second single as part of the Shu campaign, the video for which features the kites made by Zhang.

I thought using his kites in the video for a young pop star's song and also animating the designs was an interesting approach to mixing the old and the new.  Some people might see it as nothing more than a thinly veiled attempt to expose a younger generation to traditional Chinese kites with the hopes of gaining some appreciation for them, but the I think the marketing people tried their best.  I think if maybe young people didn't know that the designs were done by an old-school craftsman, they might think it's neat.  Or perhaps the long-standing history of kites and their non-mass-produced, handmade nature are the very things to spark interest among Chinese hipster youth, equivalent to things like taxidermy or any food promoted as "artisanal" here in the States.

Anyway, I applaud Shu for trying to bring attention to yet another cultural institution that's slipping away, and I liked the bright colors and patterns on these oils.  I just wish Shu would make this information readily available on their U.S. website.  If they're going to sell the oils here then they need to provide the backstory too.  I'm sure a lot of American buyers would be curious.