A few years back I explored makeup that visually resembled sweets.  But what about makeup that actually smells like desserts and other foods?  Sure, bath and body products and skincare items with foodie aromas have been popular for years, but I found it interesting that color products, i.e. items worn on the face that usually aren't scented at all or with the typical floral/herbal scents, are being made to smell like chocolate and other edible delights.  So let's take a look at when this phenomenon started and where it's headed.

The earliest evidence of flavored/scented makeup that I could find is from the late '1930s.  I'm not sure whether these lipsticks were eventually released for sale or even what brand they were, but here are some happy ladies testing them in the May 1939 issue of Popular Science. 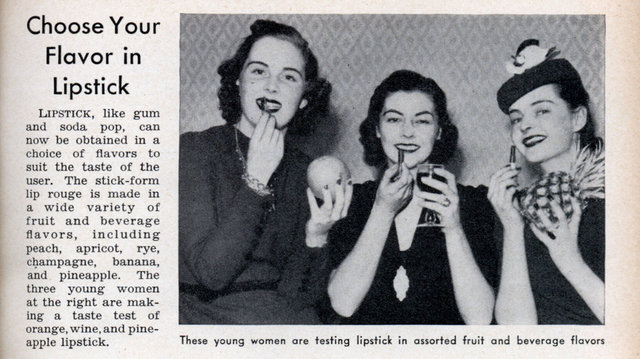 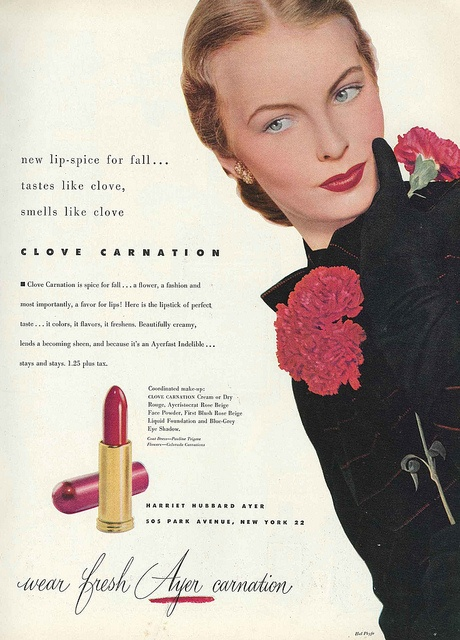 It was followed by this mint-rose scented lipstick in 1951. 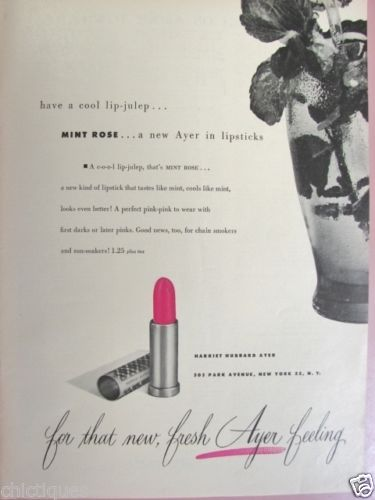 Slightly less sophisticated but extraordinarily popular among the teenage crowd, fruit-scented lip products really took off in the early '60s.  Cutex claims to be the first company to offer fruit-flavored lipsticks in this 1964 ad.  (You might remember this from my fruity ad round-up.) Soon after, in 1971, Yardley jumped on the fruit-scented lipstick bandwagon. I also remembered this one from the fruit ad post. 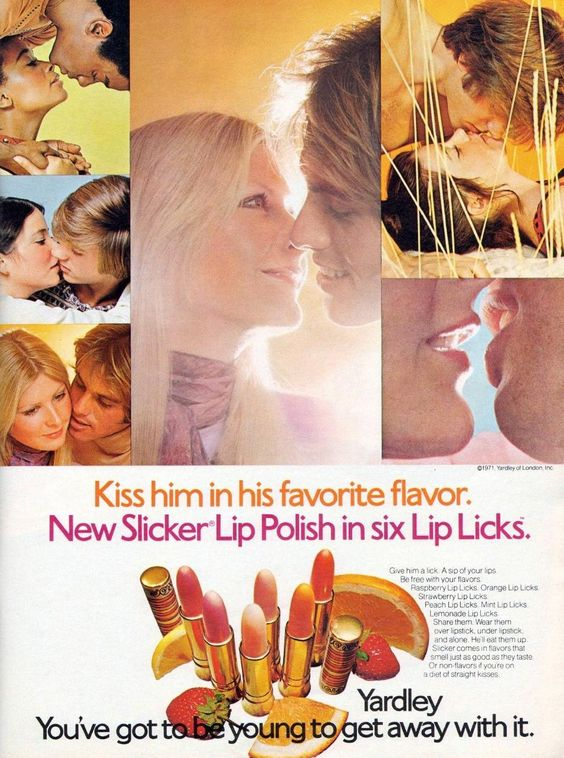 And in 1972, the company expanded the Lip Licks line to include dessert-inspired flavors (you might remember this ad from the Sweet Tooth exhibition.) 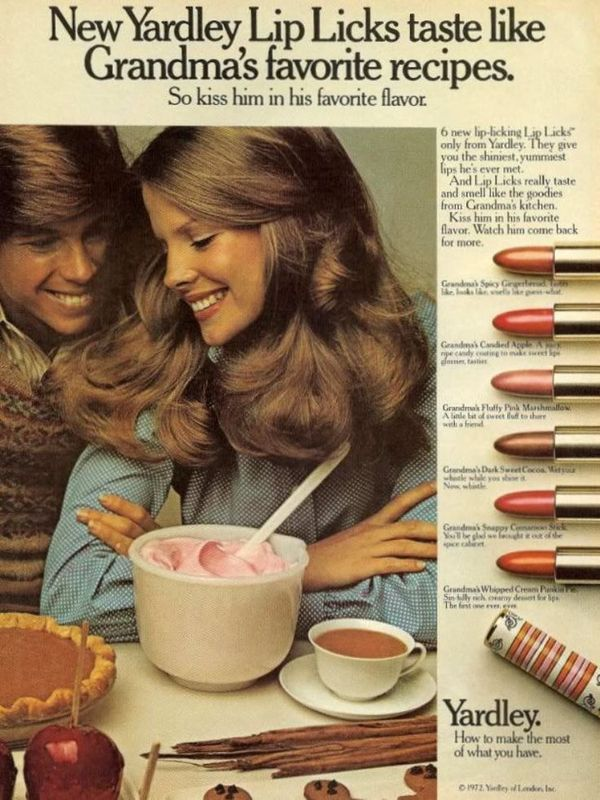 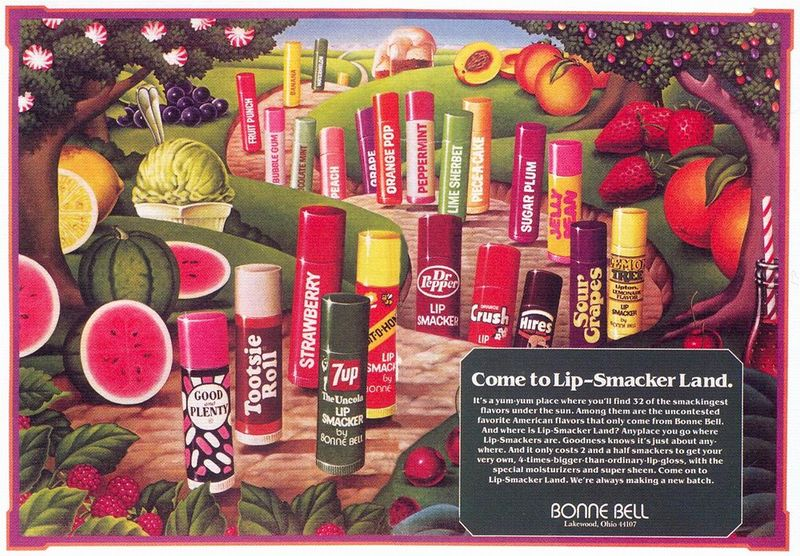 Avon wanted in on the action, as evidenced by these dessert-flavored balms that were released throughout the '70s and '80s.  (I'm not sure exactly who these were being marketed to - I imagine it was mostly kids, but maybe some teenagers and adults bought them too.) 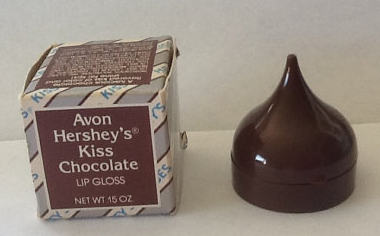 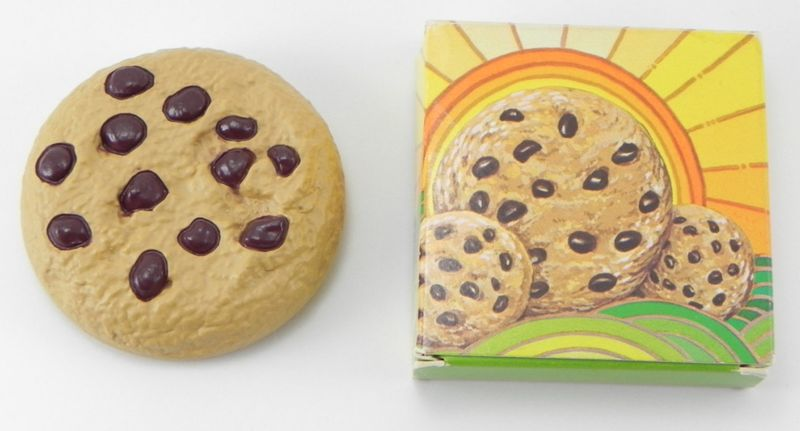 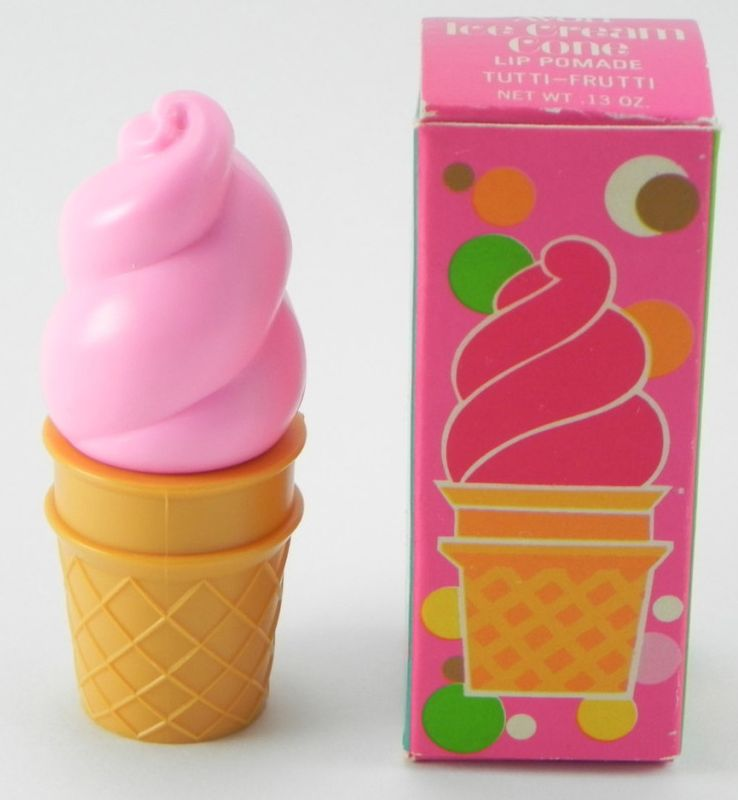 Thanks in large part to the enormously popular Lip Smackers line, other companies proceeded to try to get a piece of the teenage demographic by cranking out flavored lip products through the '80s. 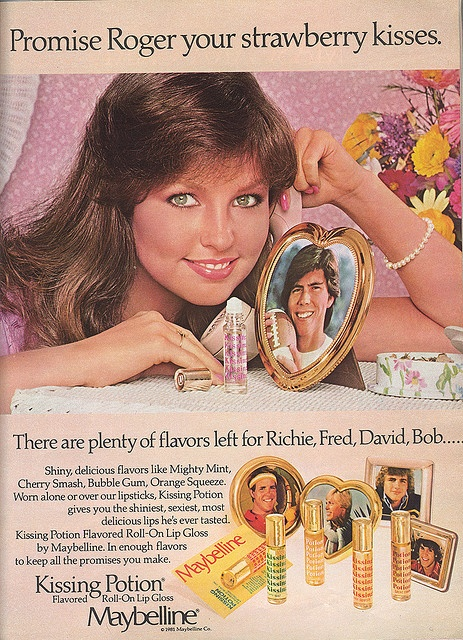 By the early aughts, products like Philosophy's Lip Shines and On 10's vintage-inspired lip balm tins came in more upscale, less teenybopper-esque packaging and at a higher price point to appeal to a more grown-up crowd, but retained a few of the same scents as the inexpensive likes of Bonne Bell.  In 2004 Tinte Cosmetics revived popular flavored balms that were known as "Lip Lickers" and produced by a Minnesota-based company from 1977 through 2002.  In an effort to appeal to older women's nostalgic side, Tinte retained both the original sliding tin packaging and graphics.  The food-scented balm market started to achieve full saturation around this time, especially when a company named Lotta Luv began partnering with big food and beverage companies like Hershey's, Pepsi, and Dairy Queen, along with a variety of other well-known snack, candy, cereal, and chewing gum brands.  Novelty companies offering their own crazy food flavored balms soon sprung up afterwards.  By 2012 one could find balms flavored in foods ranging from Cheetos and beer to pickles and corn dogs.

My hypothesis is that since foodie lip balms had officially jumped the shark with all these wacky flavors, coupled with the fact that makeup companies were only including lip balms among their scented cosmetic offerings, makeup brands had to get more creative when it came to adding fragrance to their products.  No longer were clear lip balms enough - it was time to branch out into face and eye products, along with lip products that actually contained color.  Chocolate and other desserts were still the reining favorites.  But items like Stila Lip Glazes and Becca Beach Tints, both of which offered a variety of fruity scents, as well as Benefit's peach-scented Georgia blush, also proved popular.  Some items unintentionally offered a subtle food aroma as a natural byproduct of the ingredients used, such as Bourjois's and Too-Faced's cocoa-powder based bronzers and 100% Pure's fruit-pigmented makeup line. 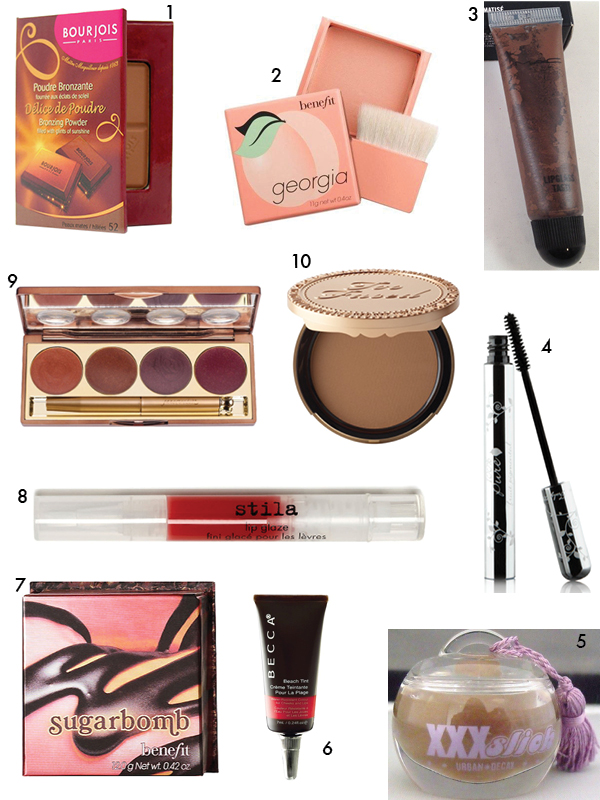 By 2012, foodie-smelling products were becoming less novel and more expected, but this familiarity among consumers didn't seem to diminish their popularity; even chocolate-scented makeup bags made an appearance.  Additionally, as Asian brands became more visible and available to the Western world, sales of their chocolate-scented products took off as well. 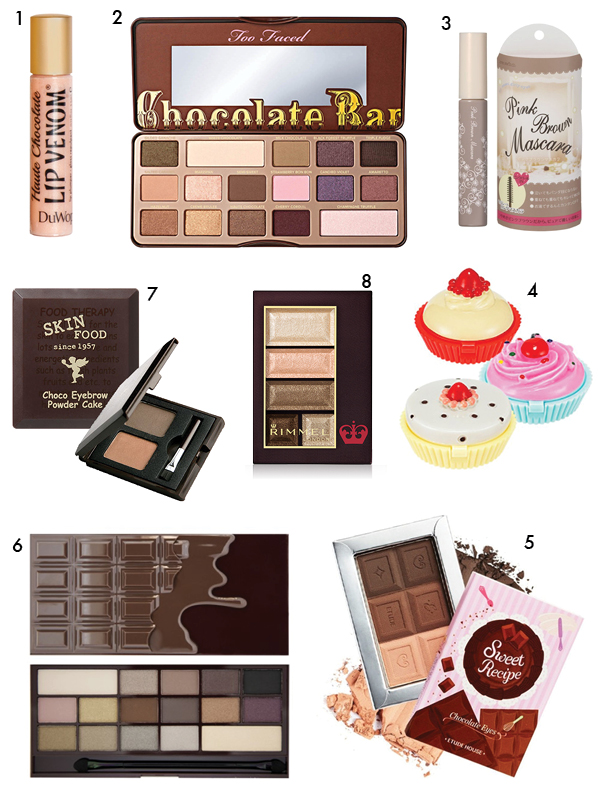 Face products weren't the only ones getting the food scent treatment, however.  While scented nail polishes were previously the sole domain of children, nail companies soon seized on the demand among adults for these products.  From Color Club's Pumpkin Spice Latte scented polish to Butter London's berry-scented polish remover, fingernails were now able to join in on the foodie fun.  Whether it was partially Dior's rose-scented polishes from their spring 2012 collection or the influence of Rosalyn Rosenfeld's (played by Jennifer Lawrence) vivid description of a nail polish top coat's odor in the 2013 film American Hustle, scented nail products rose to prominence in the past 5 years.  And the most popular ones smell not "like flowers, but with garbage"; rather, foodie polishes prove to be the best sellers. 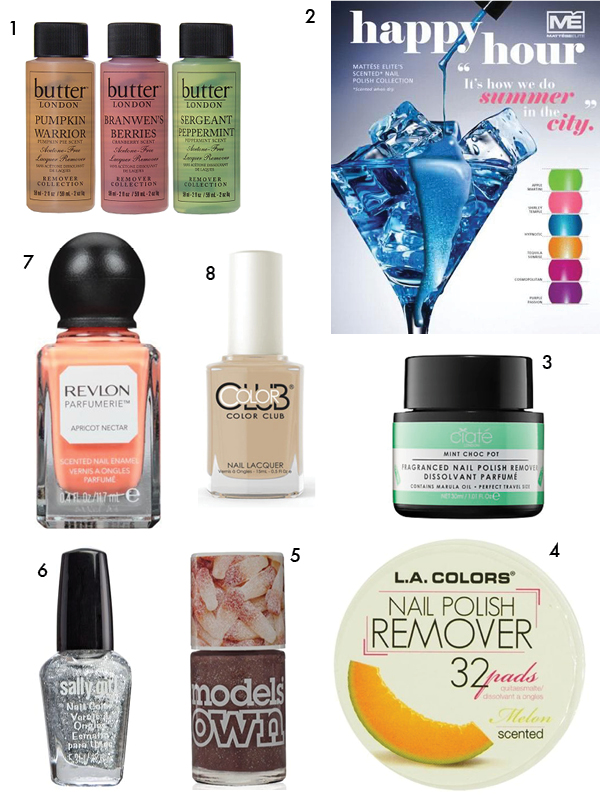 Companies continue the foodie fad today.  Too-Faced is leading the way with a whopping 5 new food-scented products in their spring/summer 2016 lineup.  Japanese brands Lunasol and RMK both offered sweet-scented items in 2015, while Etude House built on their previous dessert-y releases with their Give Me Chocolate spring 2015 collection, a gingerbread cookie scented bronzer in their holiday 2015 collection, and strawberry-scented cream blushes and nail polishes for their spring 2016 collection.  Finally, this spring Physician's Formula gets tropical with a coconut-scented bronzer. 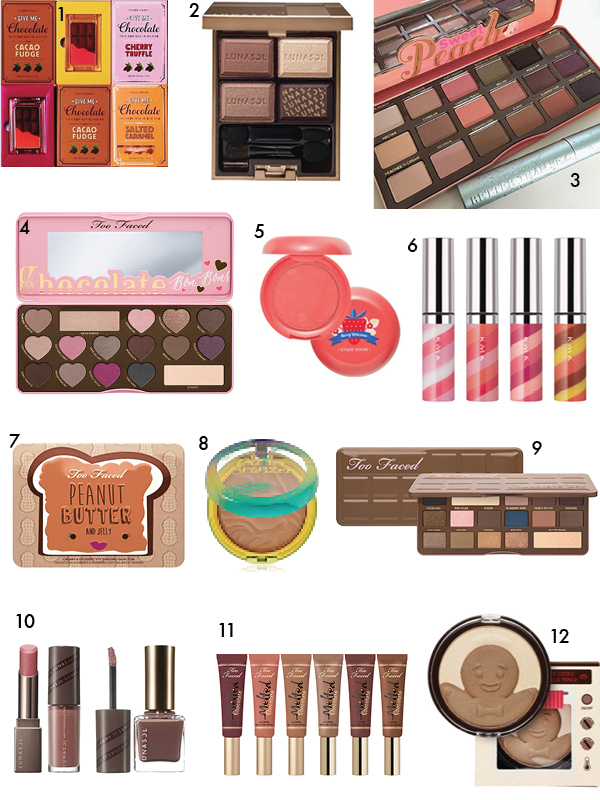 So, my questions are why companies are continuing to produce food-scented makeup, why we're buying it, and the significance of these items.  There's the obvious need among makeup brands to offer novel products, plus the desire to capitalize on the success of foodie bath and body lines.  Food-scented makeup is a natural expansion of the dessert-scented beauty product craze.  There's also the tactic of engaging the sense of smell as well as sight (shiny makeup in pretty colors) and touch (texture is key when creating an attractive makeup product - people love dipping their fingers in testers).  Appealing to 3 senses instead of two might make consumers more likely to buy the product.  Why simply wear a buttery-soft, chocolate-colored eye shadow when your lids could also smell like it?

More generally, I suppose the same basic reasoning behind the allure of dessert-smelling bath and body items applies to cosmetics.  I touched briefly on why women may want to smell like chocolate, cake or other food previously in this post and in the Sweet Tooth exhibition, and there have been plenty of news articles, but the most articulate and comprehensive exploration of the topic comes from Autumn of The Beheld.  Her points regarding dessert-inspired beauty products, such as the negative implications of marketing of sweet-smelling products to grown women and the remarkable appeal they continue to maintain, carry over to food-scented makeup.  She writes, "Foodie beauty products are designed to serve as a panacea for women today: Yes’m, in the world we’ve created you have fewer management opportunities, the state can hold court in your uterus, there’s no law granting paid maternal leave in the most powerful nation on the planet, and you’re eight times more likely to be killed by your spouse than you would be if you were a man, but don’t worry, ladies, there’s chocolate body wash!...[foodie products] do smell good, after all; that’s the whole point. And they trigger something that on its face seems harmless: Part of their appeal lies in how they transport us back to an age when all we needed to be soothed was a cupcake. At the same time, they don’t actually transport us to being that age; they transport us to a simulacrum of it."  Indeed, nostalgia can be a tricky thing to navigate in this context. As with kids-themed cosmetics from brands that primarily sell to adult women, the notion of foodie makeup could be seen as an infantilizing pacifier meant to placate and distract women from serious societal issues.

Another aspect to consider is the advertising for these products.  Today's foodie makeup isn't advertised the same way as their predecessors, who suggest these products are a good way to snag a guy.  "Could you ask for a newer, cooler way to collect men?" asks the Cutex ad.  "Kiss him in his favorite flavor," says Yardley.  (Side note: the notion of making a guy think of his grandmother while kissing is really bizarre to me, and I'm not the only one.)  "Promise Roger your strawberry kisses," implores Maybelline.  Heck, the product is even named Kissing Potion!

While the insinuation of catching a man isn't present in the vast majority of contemporary makeup ads, the idea is still vaguely floating around when it comes to food-scented items.  A reviewer for Too-Faced Chocolate Soleil bronzer titles her review, "Even my boyfriend loves the smell."  And the model for Switch's Pink Brown mascara remarks, "You can feel the chocolate scent from my lushes! [sic]  And I love it when the scent flows as your face getting close to your boyfriend, like when kissing."  (The translation wasn't great but you get the gist.)  The notion of luring a guy with a scrumptious dessert scent certainly isn't unique to makeup, but it's slightly different.  Unlike bath and body products or perfumes, one has to be up close to get a whiff of a flavored balm or cocoa bronzer.

But this fact is also why one could argue that people who wear these items are only doing it for themselves, and that we may be reading too much into these: perhaps they really are just food-scented makeup and nothing more.  Like Autumn, ultimately I don't see anything wrong with enjoying makeup that smells like fruit or chocolate or any other food.  She notes, "[Sometimes] a candy cigar is just a candy cigar...I don’t want to imply that any of us should stop using lemon cookie body souffle or toss out our Lip Smackers—joy can be hard enough to come by plenty of days, and if it comes in a yummy-smelling jar, well, that’s reliable enough for me not to turn my nose up at, eh?"  Speaking from personal experience, I loved Benefit's Georgia - something about having my cheeks smell faintly like peach was incredibly fun - but I can tell you I didn't consider, not for a second, my then boyfriend's (now husband) reaction to how my face smelled.  At the moment I'm tempted by Too-Faced's Peanut Butter and Jelly palette because not only is the smiley pb & j face ridiculously cute, the palette is scented with peanuts.  That is a fragrance I haven't seen in eye shadow before; the sheer novelty of it brings a smile to my face.  I'm not even a palette person, but the idea of inhaling a light peanut aroma while applying eye shadow is the aspect that makes me want to buy it.  I imagine that for most women, it's not about getting close to a significant other, it's about the multi-sensory pleasure you experience when applying these products.  I'd say that given how subtle and ephemeral the scents in foodie makeup are, they're actually intended to be enjoyed at a personal, individual level rather than something to be shared.  As one reviewer for Revlon's Parfumerie nail polish notes, "It's funny because you forget about it, and then I guess I don't realize how many times a day I touch my face, because I keep getting a whiff of it, and each time I'm totally surprised!”  Overall, no matter what makeup companies have in mind when creating these products, I think it's okay to perceive them simply as brief, fleeting pick-me-ups rather than as ways to entrapping a man or treating grown woman like children.  Of course it's a subject worth questioning and we must continue to be mindful of how makeup is marketed, but no one should feel bad for liking chocolate-scented mascara or nail polish that smells like cookies.

What do you think?  Are you down with food-scented makeup?  This very unscientific 2008 poll says that people are fairly evenly divided on the subject, so I'm curious to hear your thoughts.