I've always been fascinated with the zodiac, so I'm drawn to any products that feature the 12 signs.  And obviously since I love makeup I have a special affinity for compacts with zodiac imagery.  There's also something deeper going on - perhaps because of my ever-present need to create order out of the cluttered chaos that is my brain, I like anything calendar-related, whether it's the 12 months of the year or the 12 zodiac signs.  Twelve is such a nice neat number, and each month or zodiac sign signifies a particular time of year, making it easy to recognize its passage.  And January seems like a good a time to talk about the 12 months/zodiac signs as they all start in January.  But enough of my ramblings and onto a very cool find.  I stumbled across this while looking for vintage compacts for my own personal use (more on that next week). 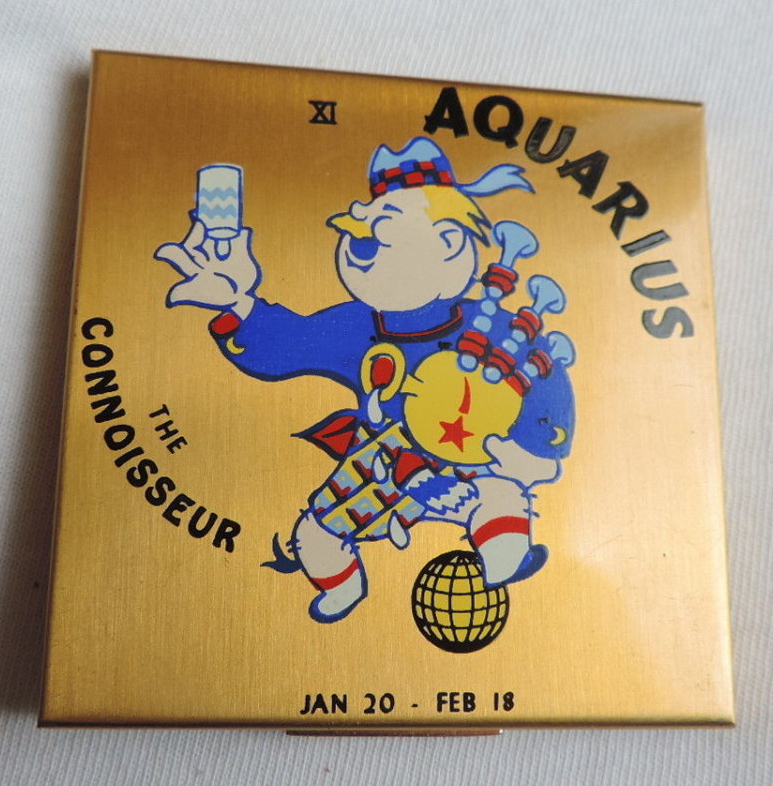 I liked the strange cartoon character representing the Aquarius sign and thought the little rhyme on the back of the compact was genius.  I also appreciated both the traditional zodiac symbol above the rhyme and the corresponding element (water, earth, wind, fire) beneath - such great details.  But what really caught my eye was the artist's signature on the lower right.  I definitely wanted to see more work by this S. MacNiel, and I also wanted to find out how he ended up doing these illustrations for Elgin. 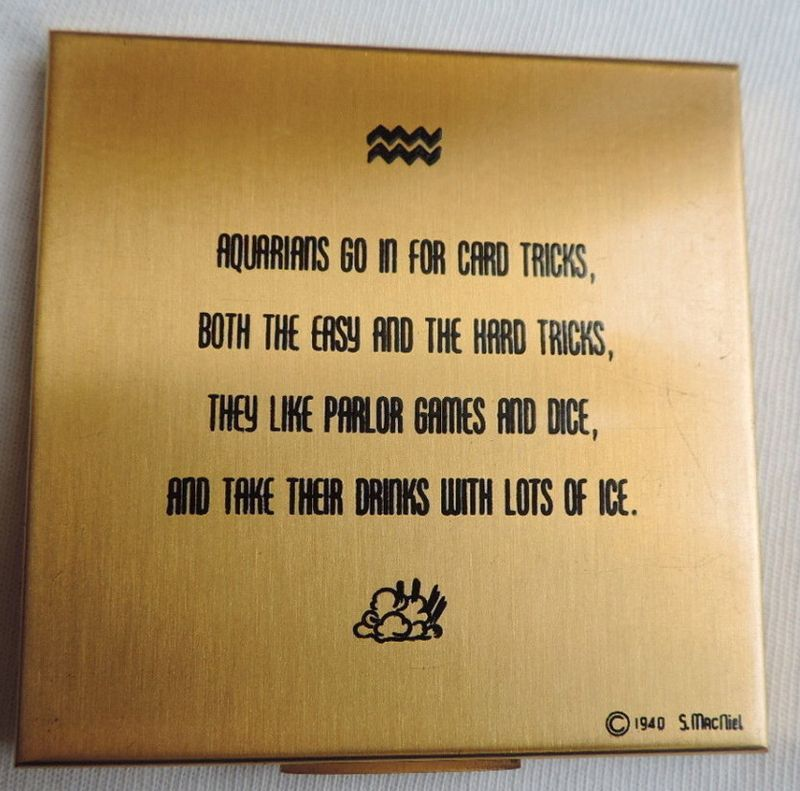 I set about finding as many images of these compacts as I could. Here's Aries: 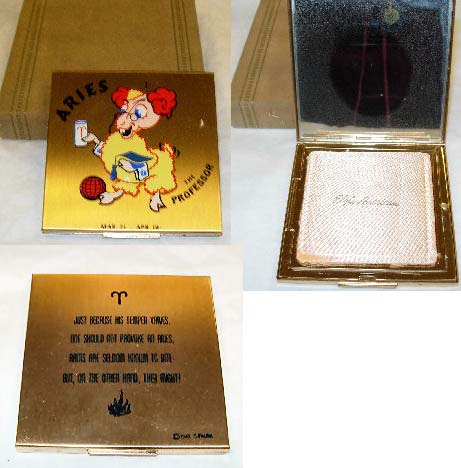 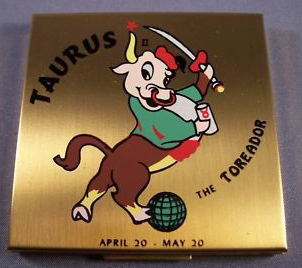 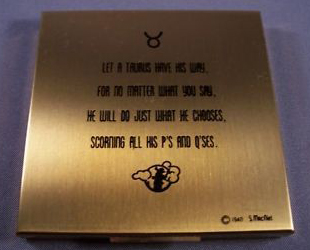 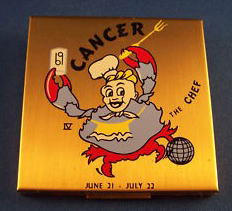 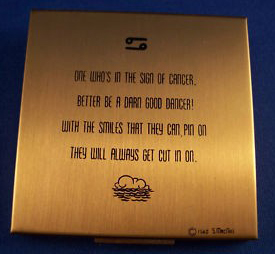 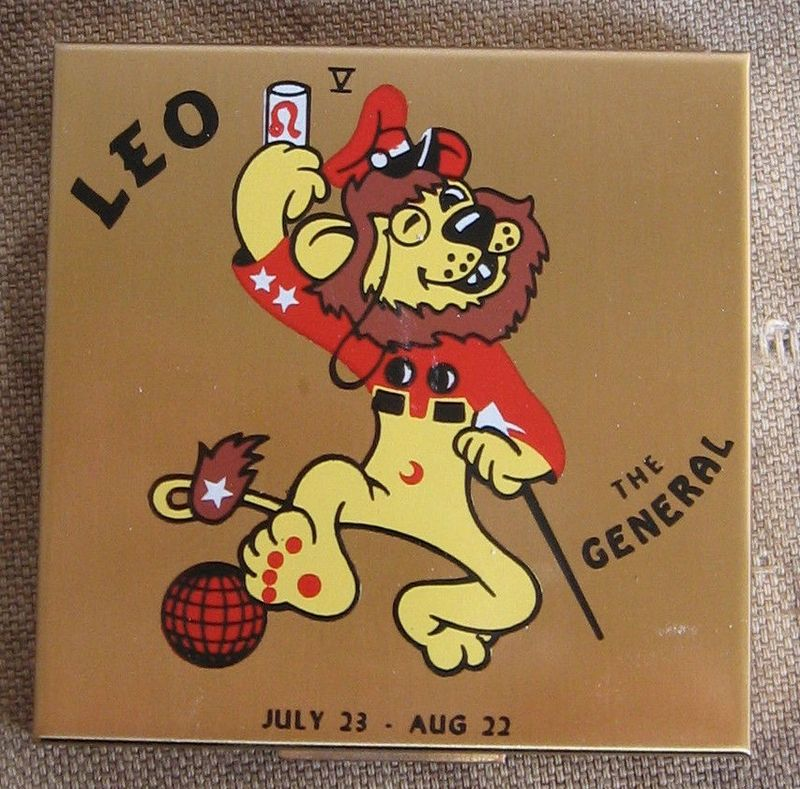 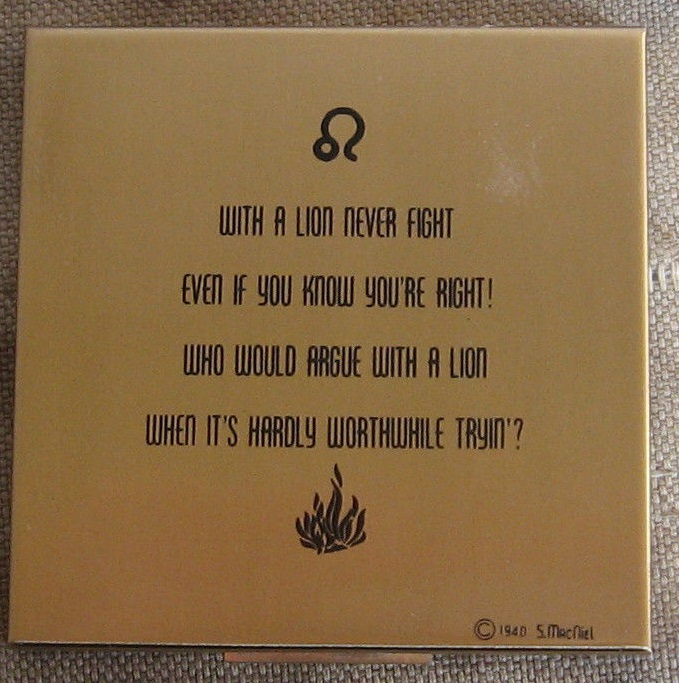 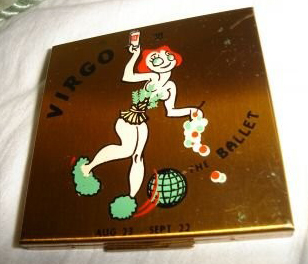 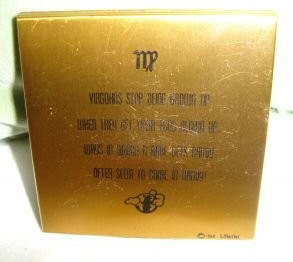 Libra - no pictures of the back, but the seller included the rhyme:  "Libra people love nice things/Lollypops and diamonds rings/ They're happiest when they have bought/A lot of stuff they hadn't ought." 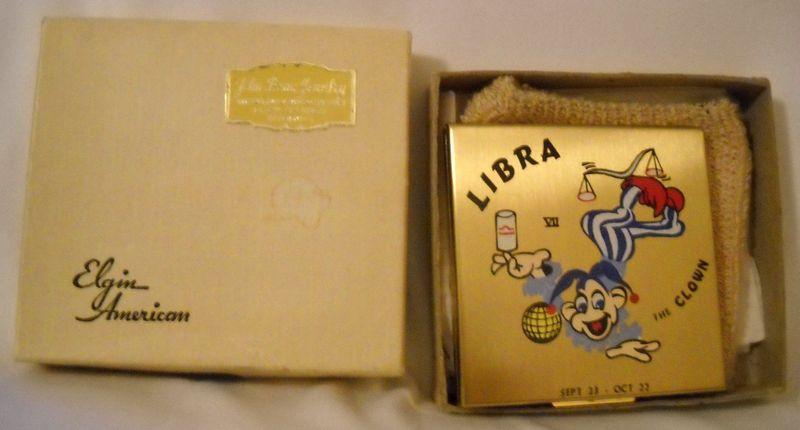 I couldn't find a photo of the actual compact, but here's an ad from a Pittsburgh newspaper from May 7, 1948 for Scorpio - based on the ad copy, they were playing these up as a Mother's Day gift.  What I was confused about is why these were advertised in 1948 and the date near MacNiel's signature on the compact is 1940. 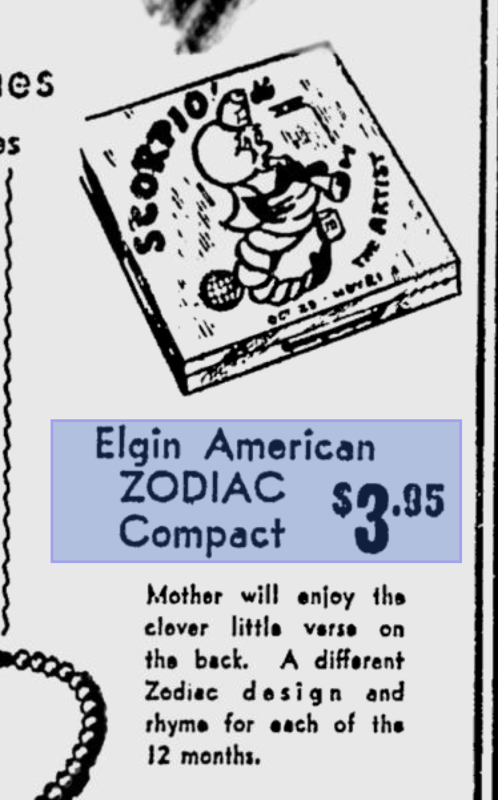 I was determined to reconcile the dates, so I went digging in search of information on man of mystery S. MacNiel.  I found out the S. stands for Stanley, and MacNiel was a Scotsman who traveled the world but ended up in New York City.  In 1940 he published a book of cocktail recipes based on zodiac signs.  This wood-bound book fetches hundreds of dollars at various auction sites.  The cover image is bizarre, but I have to admit quite creative.  Grapes for hair, orange slices for ears, lemons for eyes, cherry nostrils, and I particularly love the way the cocktail glass becomes her mouth. 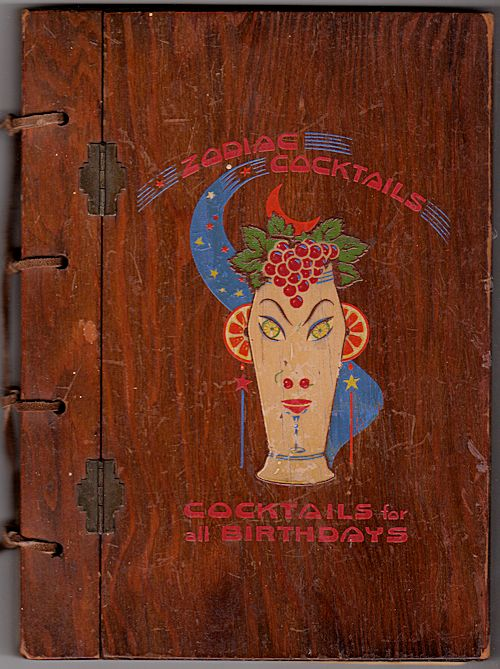 I can't believe he mentions Mussolini as a Leo of note.  Uhh...

The book might not have been strange at all if our buddy Stan was a known author and artist, but he didn't seem to have a defined career.  He was described as a "lecturer and leader of the Ambassadors of Good Cheer," whatever that is. (I googled and didn't find much - may have been something alcohol-related.)  The book's introduction doesn't give much of an idea of what he actually did for a living either.  MacNiel says, "For twenty years I was a Vagabond Cocktail Collector. During those years of travel I found great interest in the native foods and beverages of the countries I visited.  If a native beverage, of whatever concoction, was palatable to me, I acquired the recipe.  Thus, after several trips around the world, 'wining', and 'dining', I began to feel sufficiently well-acquainted with cocktails and other drinks from the four corners of the globe to tell others about them."  So he's very well-traveled, but what did he actually do?  How did he get into illustration and design?  I do like the title of "vagabond cocktail collector" though.  That must have been a pretty sweet gig.

Anyway, equally peculiar was MacNiel's creation of a very ornate jeweled brooch in the shape of the head of the "fruit lady" that appears on his cocktail book's cover.  I don't know why the patent spells his name incorrectly. I also have no idea why he made this piece of jewelry. 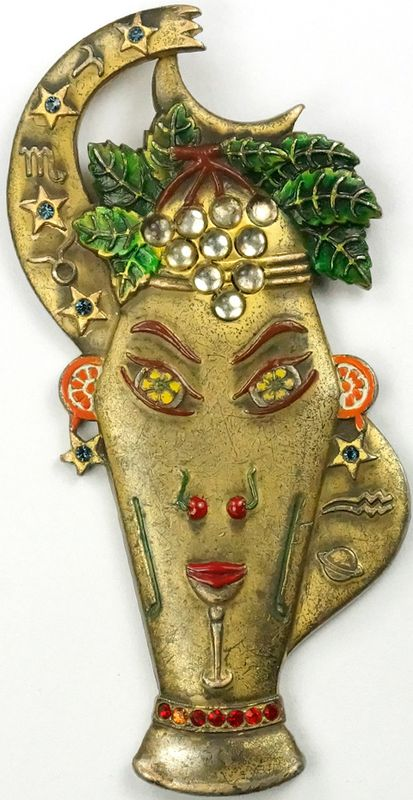 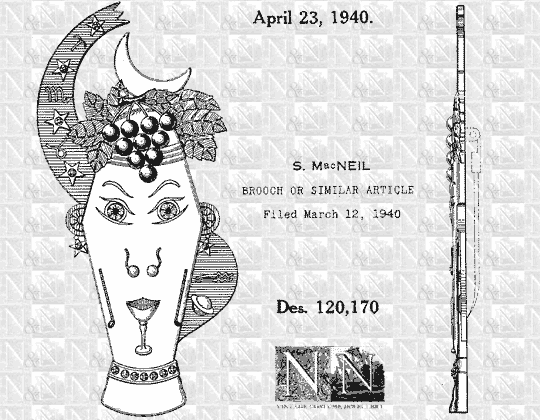 The brooch (a.k.a. a "fur clip" - fancy!) was apparently sold at Saks in New York and, like MacNiel's book, sells for hundreds of dollars.

So that's interesting, but what does all this have to do with the compacts?  And what about the fact that the book was released in 1940 and the compacts seemingly weren't released until 1948?  Well, here's the connection: the same rhymes that appear on the back of the compacts are in the book under each sign.  The illustrations are different but the rhymes are the same.  Compare the rhyme at the bottom of this page with the Virgo compact above. 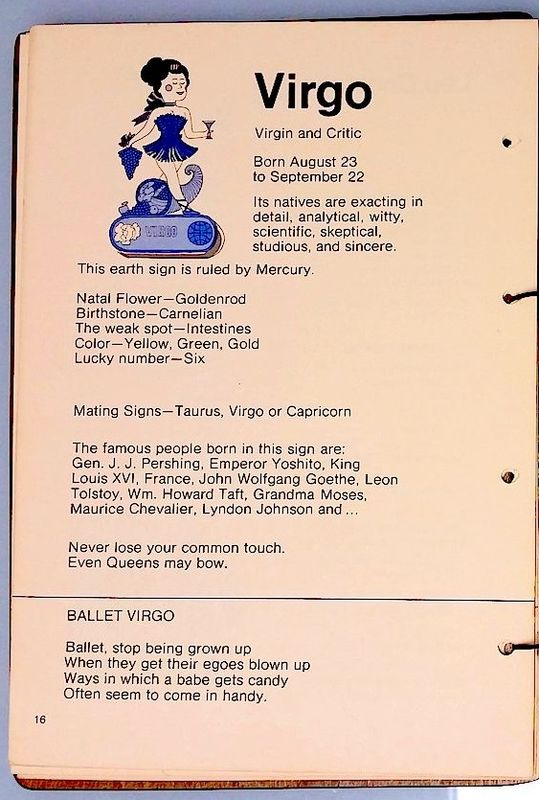 So my best guess is that he patented everything in 1940 (see his copyright for "Zodiac Humor" that year) and in 1948 allowed use of his illustrations and rhymes for the compacts, so they weren't created specifically for Elgin.  Also, he lent his work not only to Elgin, but to several other endeavors as well: tiles (that could be used as trivets or wall decorations), cocktail glasses and napkins.  This article in a Brooklyn newspaper from April 15, 1948 sheds a little light on the various zodiac collections, but still doesn't explain what Mr. MacNiel did for a living other than he was a "man of varied careers".  It does mention that he once hiked across the entire U.S. in 90 days and took credit for introducing mens' shorts as casual wear in the States.  Near as I can figure, given these facts and his seemingly endless globe-trotting, he was simply a nomadic (possibly often drunk) jack of all trades who wasn't content doing one thing or being in one place very long.  (Why is his name is spelled wrong again?)

Additionally, it looks like in 1953 MacNiel licensed his images to be used for a set of mugs produced by a ceramics company called Rossini Japan. 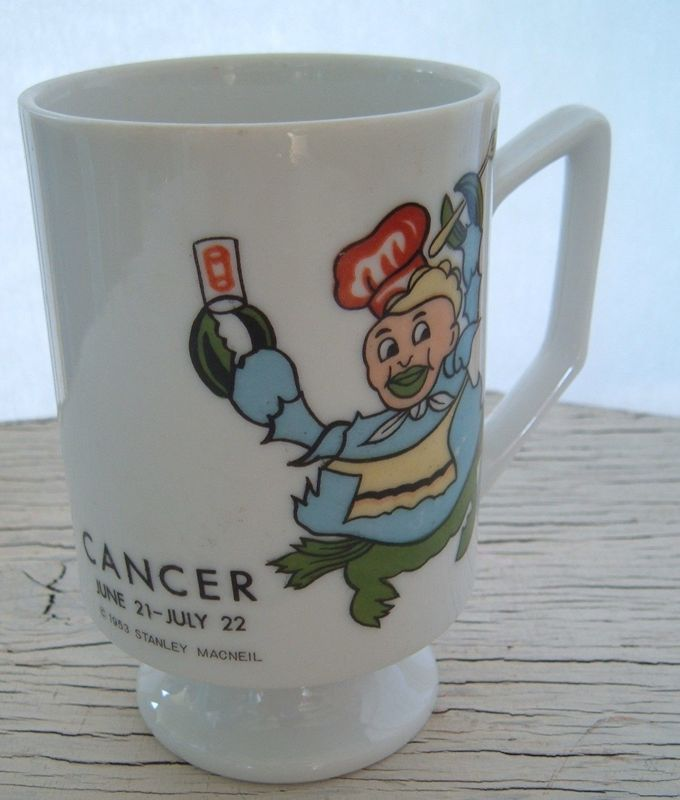 I also searched for some tiles in hopes of unearthing more images that would have appeared on the compacts, and I found some I couldn't find in compact form:  Sagittarius, Scorpio and Pisces. 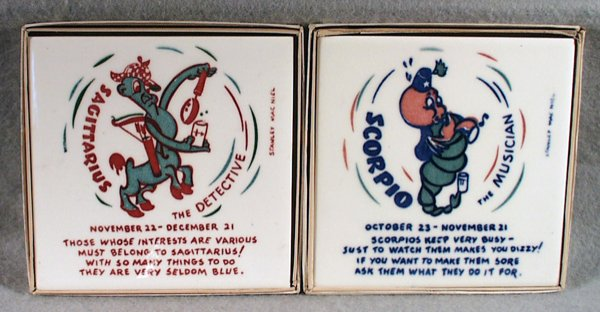 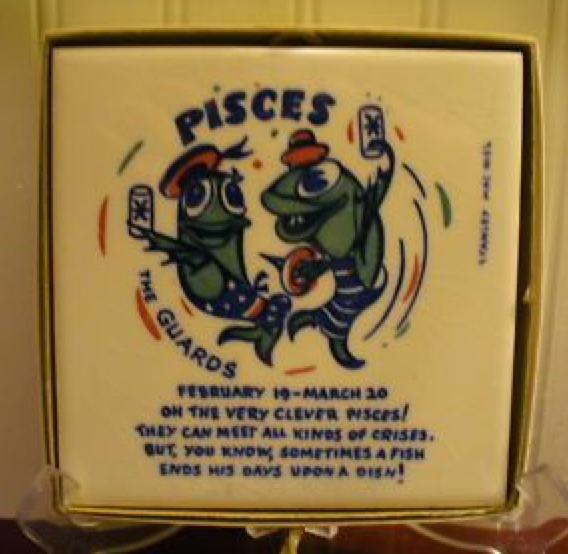 For the life of me though, sadly I couldn't find any images of Capricorn.  I guess 11 out of 12 isn't bad, but that's going to drive me crazy.  Hopefully one will surface eventually.

While I've figured out the release date of the compacts and a little more about the person behind the illustrations, I'm still not sure how the collaboration came about, i.e. whether MacNiel approached Elgin or the other way around.  I also wonder whether he was an Aquarius, since the character for that sign seems to be Scottish (given the kilt and bagpipes) and is labeled as the "Connoisseur" while examining a drink in his hand.  We know MacNiel was Scottish and considered himself a cocktail expert, since he mentions mixing "thousands" of drinks as research for his book, so perhaps the Aquarius fellow is meant to be a self-caricature.  Unfortunately I can't find a date of birth anywhere for him.  But overall, I was pleased with my detective work and I love these compacts, silly and cartoonish though they are.  And MacNiel sounds like a hoot - I would have loved to have a drink with him.

What do you think of these?  My collector's itch is definitely acting up and wants me to start hunting down all of them...if I ever come across a Scorpio one I'm going to pounce for sure!