A few months ago I was digging my blotting sheets out of my makeup bag at work and realized that it was a total disaster.  Not that I had too much stuff crammed in there, but that the bag itself was an embarrassment.  Should a Makeup Museum curator really be walking around with this horribly beat-up bag?  (The paper stuck to the front is an old receipt...how it got there I don't know but I could never get all of it off.) 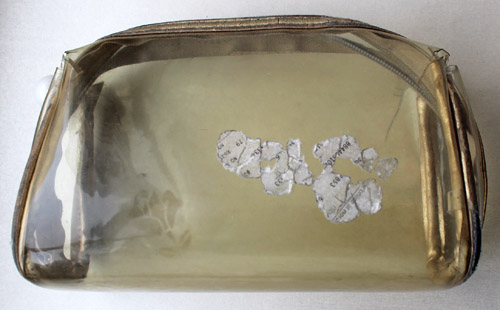 The corners were totally cracked.  It's a wonder things weren't constantly falling out. 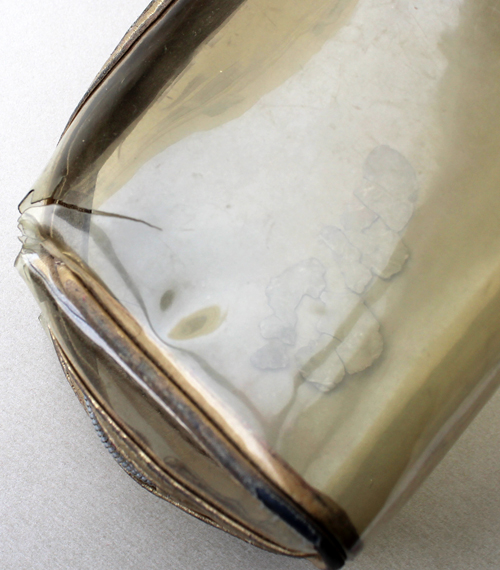 When I dug out my blotting sheets I also noticed I needed to part ways with my beloved Paul & Joe mirrored blotting sheet compact.  I loved it and they don't make these particular compacts anymore, but the thing is a mess - completely faded, stained and torn. 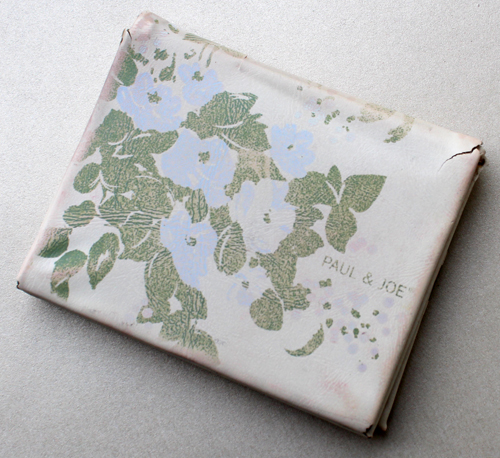 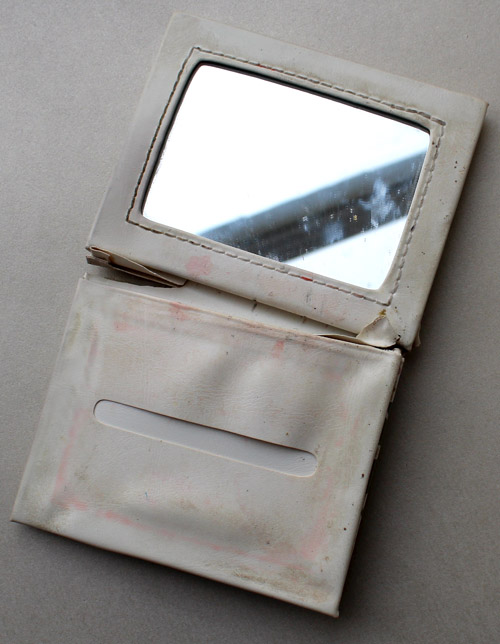 There was also this very worn powder compact.  I loved Prescriptives but dear god, this needed to go. 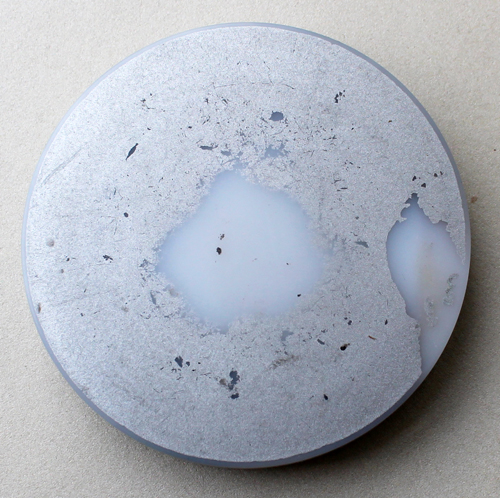 In addition to my makeup bag, I came to the conclusion that the compact mirror on my vanity could use a refresh as well.  There is a huge wall mirror for the vanity, but it's a few feet from where I sit - even leaning over I can't get as close as I'd like.  And sometimes I need to get really up close (like when I'm not wearing my contacts) so I use a small compact mirror so I don't have to stand up to move to the wall mirror.  I know it sounds weird, but having a compact mirror is a lot more convenient.  For years I had been using yet another decrepit Prescriptives compact.  Again, should a Makeup Museum curator's vanity have such a bland, worn-down compact mirror? 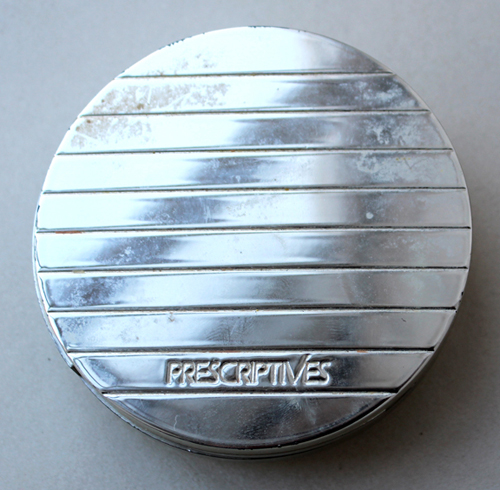 I decided I needed some upgrades, post-haste.  First order of business, the bag.  I knew I definitely wanted to continue with a clear bag, as it makes it so much easier to find things.  After much research I got this one at Sephora.  It's actually part of a really cute set. I found the medium-sized one to be just right.  I absolutely adore the looks of Truffle Clarity clutches or pouches, which Sabrina at the Beauty Look Book brought to my attention (she knows the good stuff!), but I think even the smallest ones might be a little too large to fit well in my purses.  Even though the Truffle site has super-helpful pictures with the bags filled, I still couldn't quite visualize how they would look.  (I am notoriously bad at estimating size/volume).  Still, I may just buy one anyway because they're so pretty - I'm especially loving this lemon and silver one.  Anyway, if you're in the market for a clear makeup pouch I think either this Sephora set or Truffle are your best options. 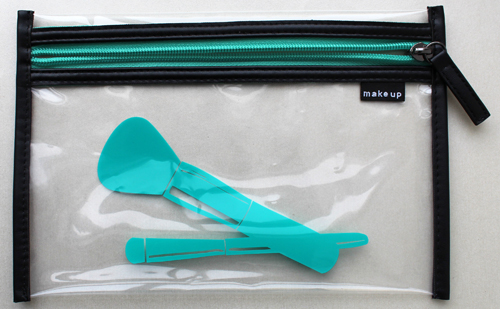 Then I rounded up some ideas for compacts.  And here's where the old stuff comes in...I didn't want anything new, surprisingly.  I feel as though vintage compacts have so much more personality than most of today's (at least the standard, non-collectible ones).  So vintage hunting I went. I selected this Stratton compact from Etsy for my makeup bag. I think it has the perfect amount of wear - not so much that it looks like trash but just enough to know it's vintage.  I also like the scalloped edges and the combination of silver and gold. 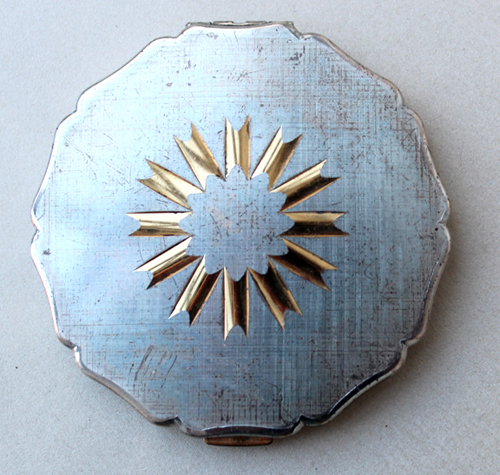 My current project is to determine whether I can somehow remove the old powder that's in there and replace it with Makeup Forever's High-Def pressed powder, but I highly doubt it'll fit.  Guess I'll cross that bridge when I come to it.  As for the blotting sheets, I thought it would be pretty funny to contrast the sophistication of the Stratton compact with something totally off the wall, like these Dinoplatz sheets. 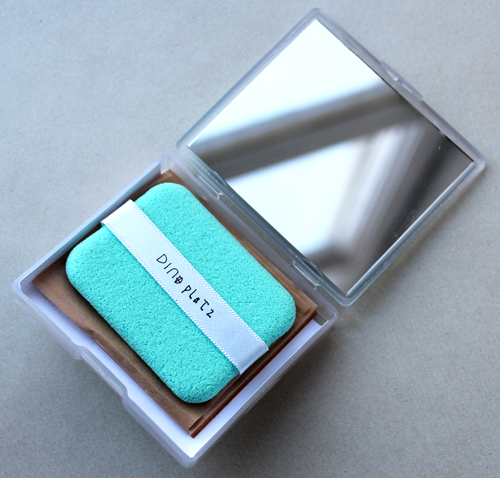 Truth be told, I haven't found any blotting sheet compacts that measure up to the Paul & Joe ones. Bobbi Brown makes a nice one, if a little boring.  And obviously Paul & Joe still makes adorable blotting sheets and Boscia has some pretty patterns (I'm partial to the peppermint sheets since they smell yummy!), but they're stored in a flimsy cardboard container that gets worn quickly.  Tatcha sheets are lovely but also in a cardboard container that's not much sturdier than the others. And none of these are actual compacts with mirrors. Even though I don't really need a mirror since I have one in the Stratton compact, I just got so used to having a mirrored blotting sheet compact that not having one seems strange.  So Dinoplatz it was.  I just hope the plastic doesn't get too dirty.  We shall see.

For the other compact, I decided my vanity was in desperate need of some bling.  I set out to find one of the gaudiest, shiniest, rhinestoniest (okay, that's not a word) vintage compacts I could find.  I settled on this Dorset one, which I found on Ebay.  It's heavier than you would expect.

My vanity is fairly minimal and modern so it looks pretty cool sitting there in the plain acrylic box with the rest of my basics (foundations, primers, etc.).  It's like the other makeup is having an elegant soirée, all dressed in tasteful, black or neutral shades and talking softly, and in walks someone's very eccentric aunt, dripping with multi-colored fake gems and outfitted in gold lamé from head to toe.  All heads turn as she holds court, loudly spouting some wild, unbelievable story in her own hilarious way.  Now that I think about it, maybe one of the reasons I was drawn to this compact is that I did have a fairly crazy aunt who, at one family get-together, wore blue Ked sneakers, a leopard print fur coat, stirrup pants, tons of costume jewelry and insanely heavy makeup...and let me tell you, that was normal compared to the stuff that came out of her mouth!  I remember her fondly though, so perhaps that's why I chose this one - it's her compact equivalent.

Anyway, I feel as though I have accomplished my mission of overhauling these basic items to be more fitting for a curator of a Makeup Museum. What do you think?