Shaking it with Lancome and Manet

In honor of the birthday of Edouard Manet (1832-1883), today I thought I'd share this 1949 Lancôme ad that refers to one of the artist's most famous works.   It looks like Lancôme released a lip color inspired by Manet's 1863 painting Olympia. 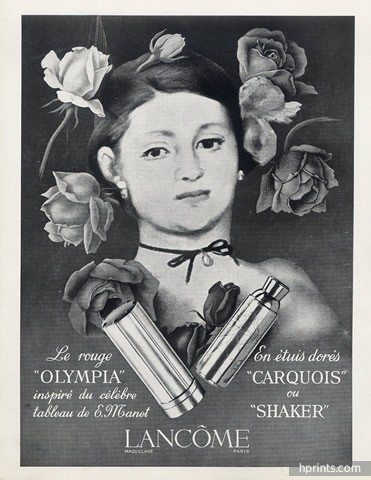 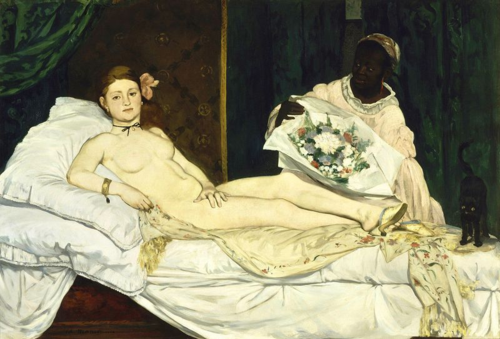 It's not surprising a French cosmetics brand referred to a well-known work by an equally well-known French painter; however, I am curious to know why they chose Olympia.  The woman in the painting was Victorine Meurent, who served as Manet's model for many of his works.  Meli at Wild Beauty wrote an excellent post on Victorine and how scandalous the painting was considered when it debuted at the Paris Salon in 1865.  As she points out, not only was Victorine posing as a prostitute, she was daring to confront the viewer with absolutely no shame: "...she was staring straight at the viewer – without a hint of embarrassment or coquettishness. Once again, Manet had painted the viewer into an awkward encounter.  Even in modern times we expect our whores to project either seduction or shame, so Victorine’s matter-of-fact expression is startling in any age. But in 18th century Paris it hinted at a moment many had never seen – and those that had probably pretended they hadn’t. This might be a 'backstage' moment – before the courtesan greets a lover, and it’s almost too revealing in its frankness – we see the courtesan’s youth, beauty, cynicism, and business acumen all at once."  Indeed, the bold, thoroughly non-traditional presentation of a prostitute (or even a reclining nude, for that matter) that brings to the forefront the harsh reality behind the trade was cause for an uproar in 1860s Paris.  So this goes back to my question of why Lancôme chose to use Olympia, given that critics, having no idea what to make of the depiction of this woman, called her everything from a "grotesque India rubber" to an "ape on a bed."  Olympia seems to be a highly unlikely candidate for a beauty icon, but as Meli notes, perhaps her unconventional looks and fearless gaze were being celebrated by 1949.

In any case, this ad offers another bit of intrigue.  I noticed that the packaging for the lipstick is referred to as a "carquois", which translates to "quiver".  If you look really closely at the lipstick on the right in the ad you can see a Cupid holding a quiver of arrows.  Interestingly, Lancôme released their Fleches (Arrows) fragrance in 1938, the ads for which also feature Cupid and arrows, so maybe the theme of the "carquois" was borrowed from the perfume.  But that's not the only thing:  the "carquois" is also listed as a "shaker".  Another Lancôme ad, this one from 1951, uses this name for a particular case.  (Side note:  I like how the curved shape of the lipstick on the left is still in production today for their L'Absolu Rouge line.)  Apparently you could choose which jewelry-inspired case you wanted to house the new Rose Printemps shade (this assumption is based on me typing the ad copy into Google Translate, which we know isn't all that accurate). 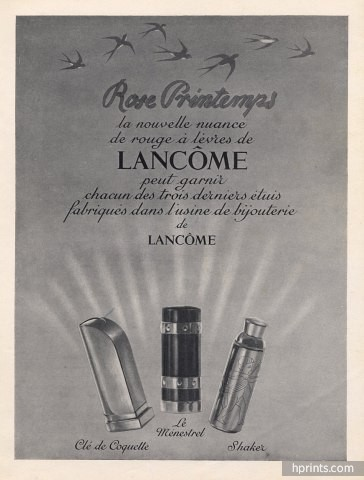 Why is this notable?  Well, for spring 2016 Lancôme is introducing their "Juicy Shakers", a new "two-phase" formula consisting of oil and pigment that requires shaking before application.  I imagine it's similar to YSL's Volupté Tint in Oil but more fun to use - I like the idea of jiggling my lip stuff around in a cute martini shaker-like package. 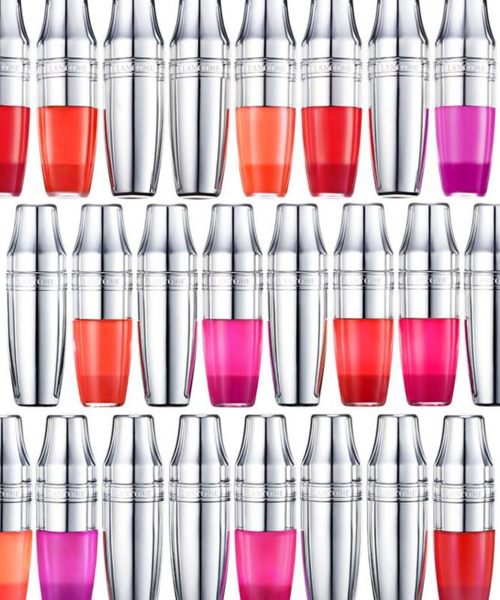 Lancôme seems to have taken a great deal of care in coming up with the name/idea, as they filed a trademark for it nearly 2 years ago.  I doubt any of their people used the Olympia ad or other vintage Lancôme ads that refer to the "shaker" when naming this new product, but it's a very interesting coincidence nonetheless.

So, two separate and quite fascinating ideas provided by Lancôme's Olympia ad.  Which do you find more intriguing, the use of a rather scandalous work or the fact that Lancôme previously had the idea over 60 years ago to house one of their lip products in a so-called shaker?