Paul & Joe wasn't the only one who did a mask theme this holiday.  Clé de Peau's Le Bal Masqué also sought to capture the mystery and intrigue of the masquerade ball.  And in my opinion they did a much better job than Paul & Joe.  For their collection, Clé de Peau collaborated with jewelry designer Joji Kojima, who created four custom masks to appear on the collection packaging.  Each one has a corresponding personality, according to the designer:  "While I was designing the masks, the characters I had in mind were fictional and I do not wish to relate them to any specific existing individual. However, I can share about the characteristics of them. For Gemma, I see the owner as the Queen or main character at the ball who has a really strong personality. For Violetta, she is a free spirit who loves to fool around with men. As for Elena, she is someone who is very difficult to approach but refined and fun at the same time. Rosalie, is very special - she is very hard to grasp, beautiful and unpredictable."  Below are Gemma (coffret), Violetta (body powder), Elena (nail polishes) and Rosalie (face serum).  You know I love when a designer imagines a backstory for their creations. 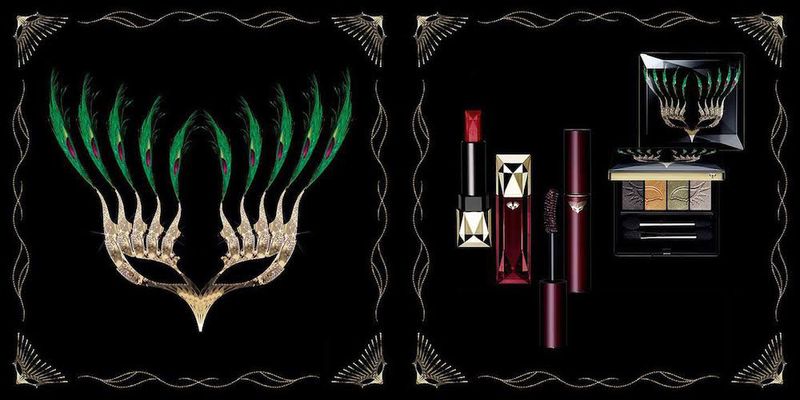 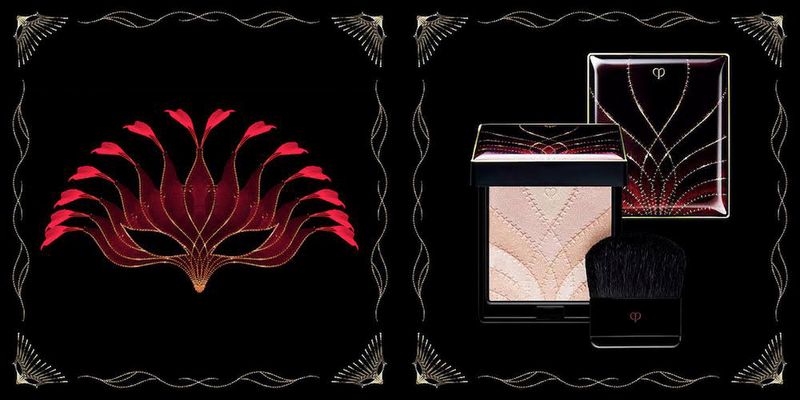 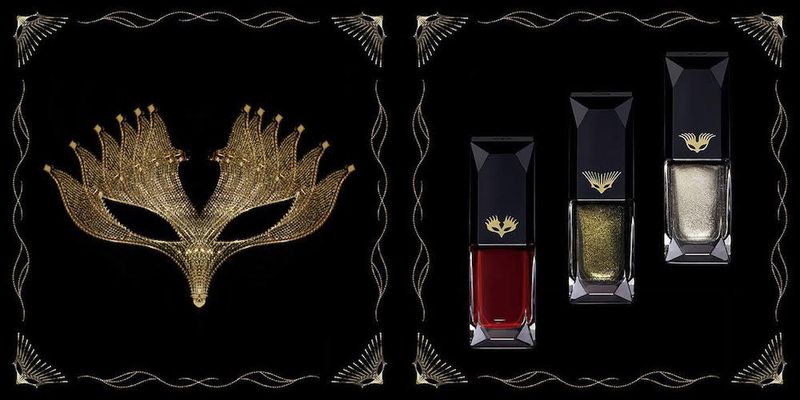 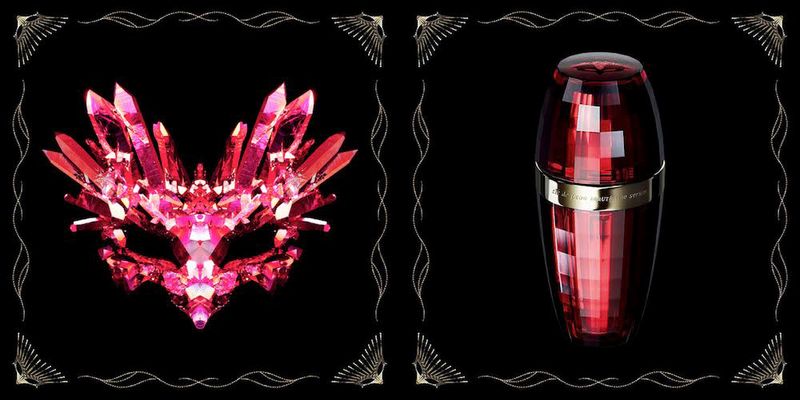 I picked up the coffret and body powder. 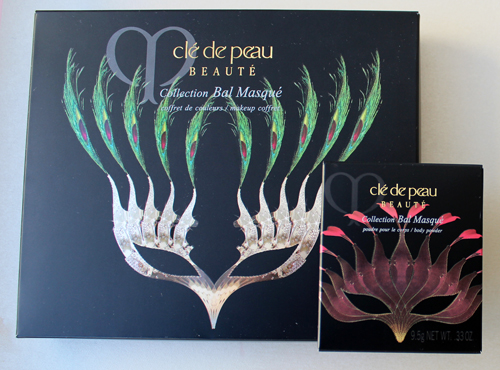 The interior of the coffret box has a lovely peacock feather pattern to go with the feathers on the mask. 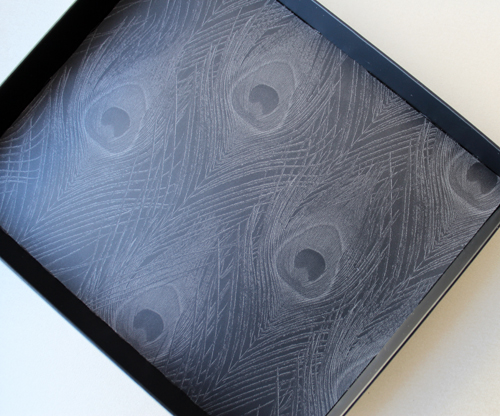 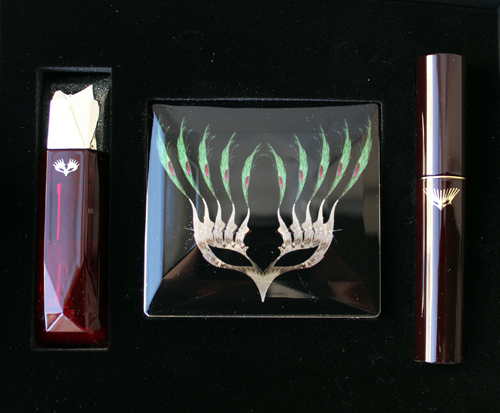 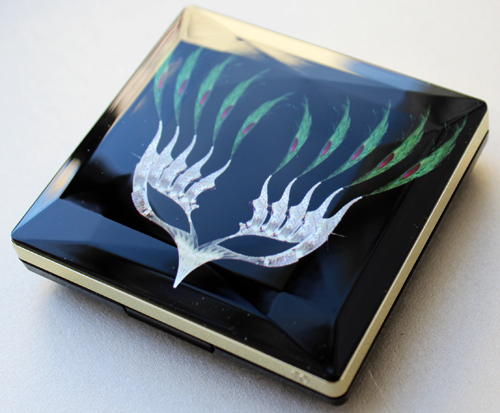 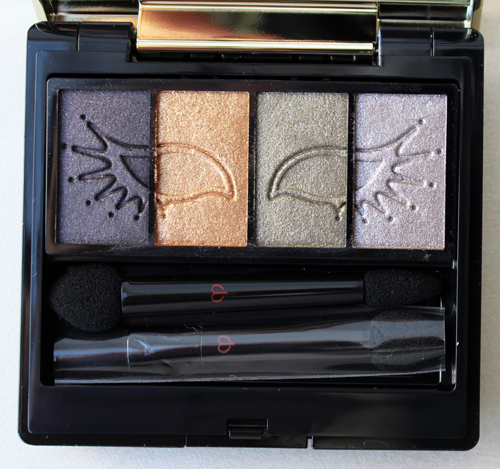 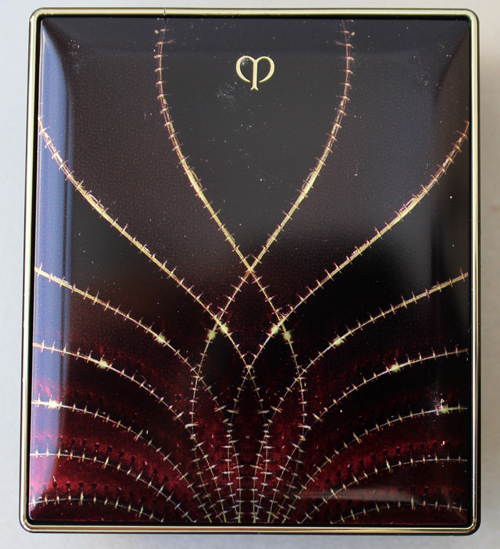 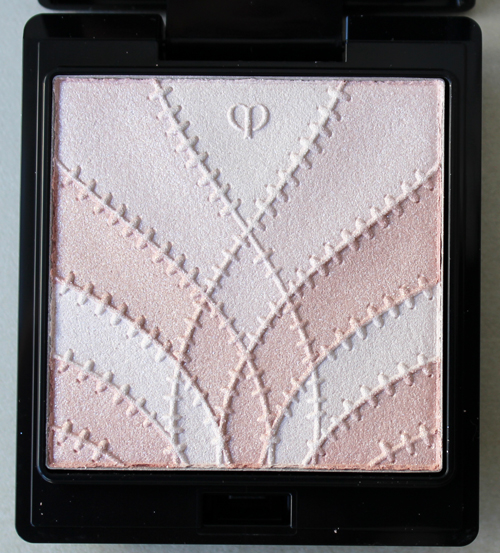 In terms of the process, each mask took two months of painstaking labor.

I can't say I was familiar with Jojima's work, but once I started digging I discovered that it's pretty awesome.  Jojima was born in California and started making jewelry at the age of 15.  He attended school in Tokyo, studying graphic design.  While still an undergrad he managed to get the attention of Lady Gaga, for whom he created the custom mask on the cover of her 2009 Fame Monster album. 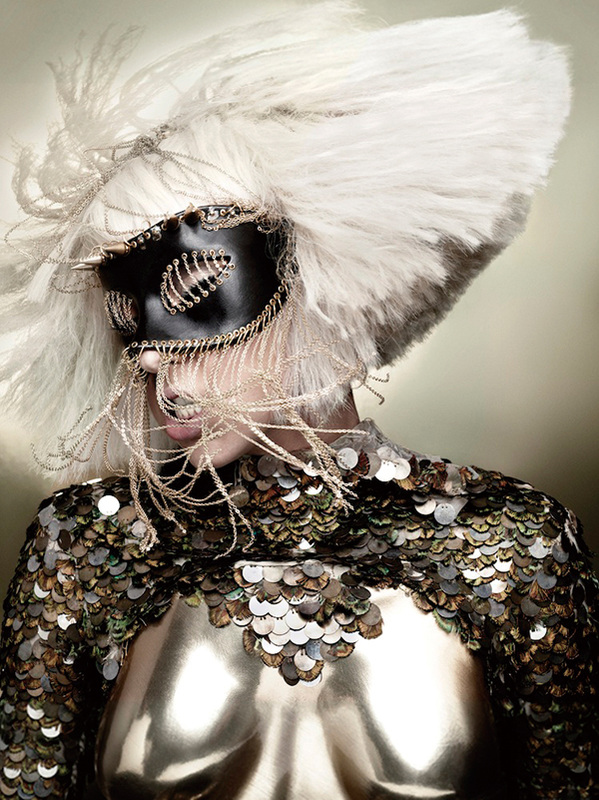 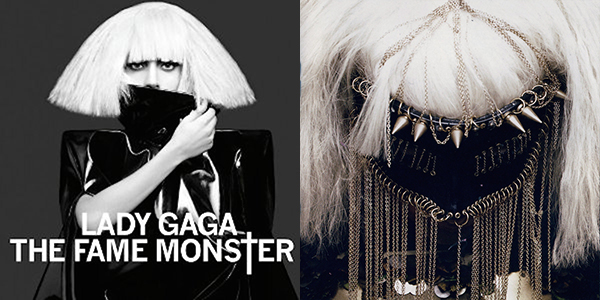 In looking at his other work, I found it leaned fairly dark and macabre.  While strangely beautiful, I was a little confused as to why Clé de Peau wanted to team up with Jojima. 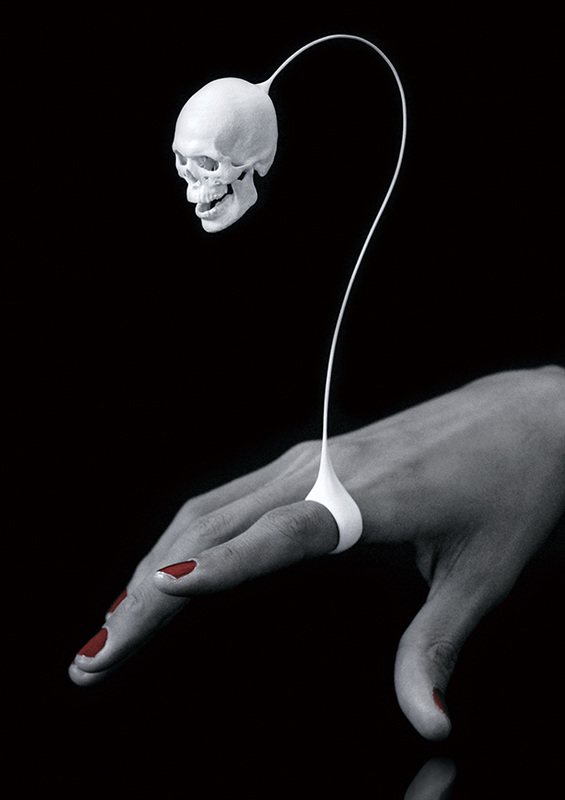 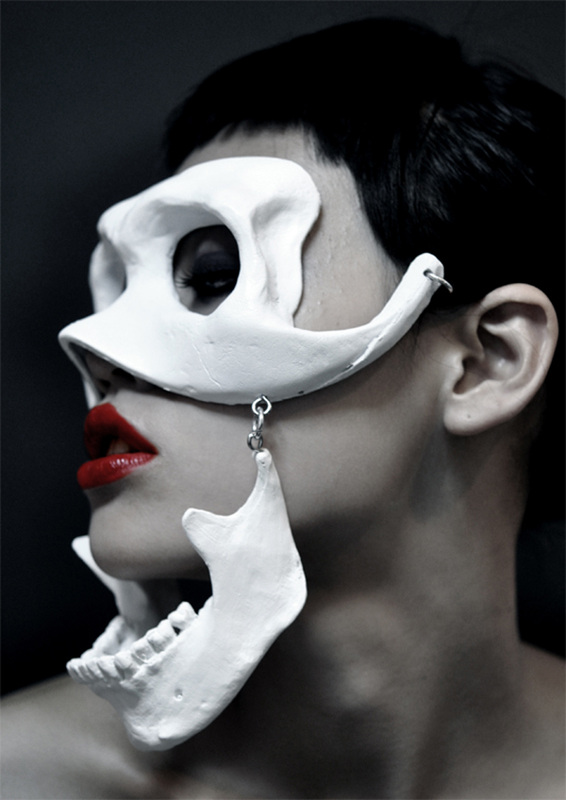 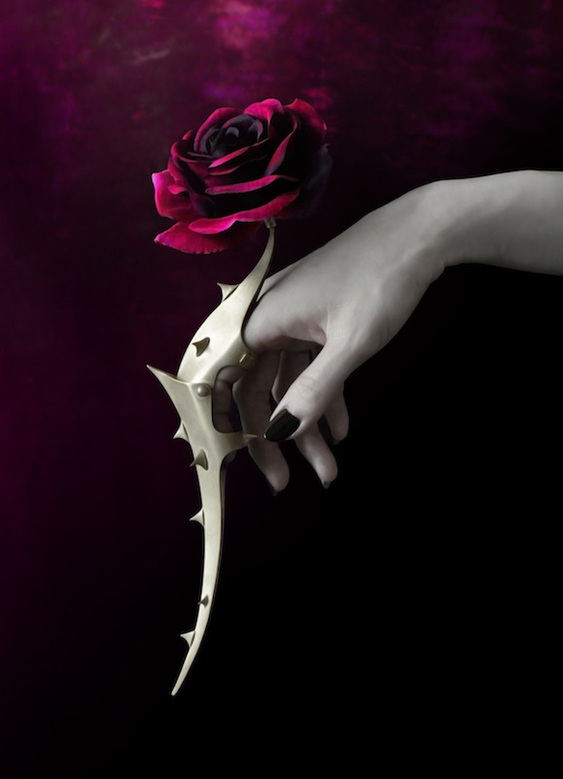 In looking at these talons and considering Jojima's connection to Lady Gaga, I was sure he was the one behind the lethal glove for American Horror Story: Hotel.  It wasn't him though, which I was pretty surprised about in looking at these. 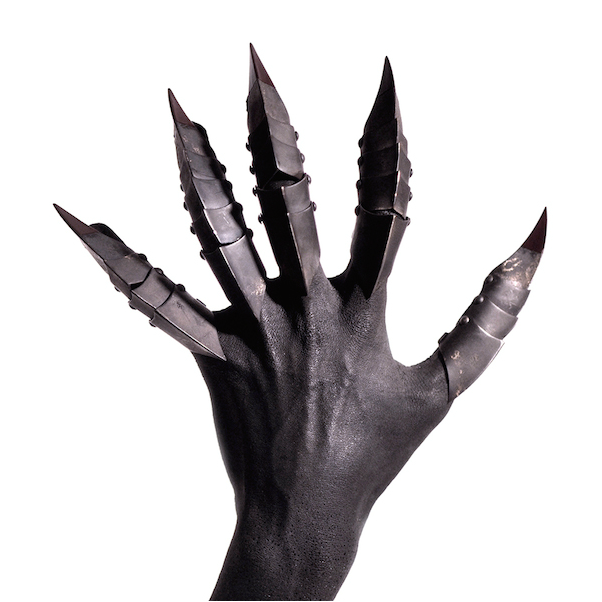 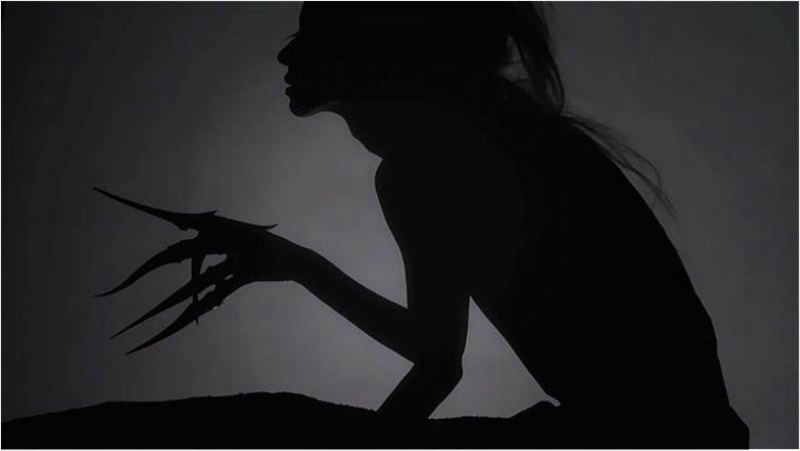 Anyway, I never would have thought of this designer for a beauty collaboration.  However, I think he did an amazing job modifying his work to suit the theme of Venetian masquerade, which was selected in advance by Shiseido.  Jojima explains how the collaboration came about and how he adapted his usual aesthetic to fit beauty packaging. "The theme for this season's collection, Venetian Masquerade was decided by Shiseido. I met up with [Clé de Peau Creative Makeup Director] Lucia Pieroni who had already decided the colors for this collection. I then redesign the packaging with the idea of having odd and bold masks to bring out the whole theme. With my experience in jewellery design, I wanted to create something different, something quirky but beautiful at the same time...this project is very new and interesting from me as it is very different from what I have done previously. I have given everything which I wanted to show in this collection through the inspirations I get when I see the colors for this season. The theme was already decided by Lucia, therefore, I worked very closely with her to come up with something which fits the theme but at the same time represents my aggressive designs. It is a great process which working with Lucia, I have also learned more about the brand itself and the kind of concept which suits the brand."  In another interview, he adds, "The designs are not a diluted version of my work; it was a good opportunity to do something different. There was an active discussion and it is 100% what I wanted to convey...I knew that Shiseido was a top global company focused on beauty. When I talked to Clé de Peau’s design team, I was impressed how precise they were. For example, for the color red, they even went into the different percentage of red in the hue!  The collection is not meant to be a distinctive difference between my past and present work, but it’s my personal interpretation of something beautiful.”  Obviously, as a collector I was thrilled to get the inside scoop on how the collaboration process operated (and that there was actually an in-depth discussion between the designer and the cosmetics company, which is sometimes lacking in other collaborations) and also happy to see Jojima's acknowledgement that this was a new creative experience for him.  As for Pieroni, Venice is a frequent destination that inspired her to do something special to commemorate her 10 year-anniversary of joining Clé de Peau.  From Vanity Fair:  "In celebration of her 10th year with Clé de Peau as creative makeup director, Lucia Pieroni looked to Venice to create her coveted collection for this holiday. Having traveled to Venice on various work assignments throughout her artistic career, she remembers being mesmerized by the fabled scenery. 'I was always struck by the beautiful colors of this ancient city, how the light and water would reflect on the ornate buildings, like the Doge’s Palace and Piazza San Marco,' she says."  How she decided on a masquerade theme I'm not sure, but I think it was genius to select Jojima for it.  As I said, his work seems rather dark and I never would have thought to work with him on a beauty collection.  However, Pieroni was able to see his potential for a masquerade-themed collection, and Jojima, for his part, understood that it was an opportunity to do something different.  I liked that she took a chance on him and he delivered.  "I’ve always had one goal in life: to create something beautiful and strong that’s never been seen before," he says.  Mission accomplished.

What do you think?  I was toying with the idea of doing a smackdown between this collection and Paul & Joe's, but honestly, it wouldn't have been a fair fight!