I'll get to the fall exhibition in a hot second, but first I thought I'd kick off this week with the beautiful Guo Pei/MAC collaboration.  I had been salivating over this collection since we got a sneak peek back in May and was very pleased I was able to get my hands on it since I was so afraid of it selling out.  Like most people, I hadn't heard of Chinese couturier Guo Pei until Rihanna wore one of her dresses to the Met Gala earlier this year (which was, incidentally, when the MAC collaboration was announced). 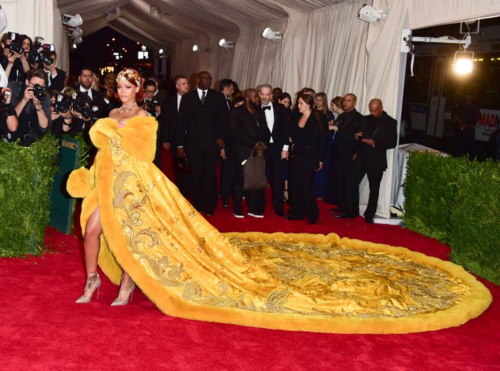 But Guo Pei has been designing elaborate, painstakingly detailed couture gowns for over 15 years and is well-known in her home country, outfitting every A-list Chinese star as well as the ceremony dresses for the 2008 Beijing Olympics.  And when I say "elaborate" I mean it.  Some of her creations can take up to 50,000 hours to construct and require assistance on the runway due to their weight.  (The dress Rihanna wore weighed in a relatively manageable 55lbs).  But why make such ornate pieces?  The designer says, "The impression China gives to the world today is a rapidly developing economy, cheap labor, and fast production. But China has 5,000 years of history and is very diverse...I don't do this for profit.  It is my responsibility to let the world know China’s tradition and past, and to give the splendor of China a new expression. I hope that people do know China in this way."  While literally years of work go into her clothing, Guo Pei shuns the usual Chinese perspective of luxury, aiming to create pieces for her customers that they will love for years to come rather than appealing to those who simply want to flaunt the label.  "I don't like the concept of luxury. In China, luxuries are seen as things you don’t really need and it conveys a negative feeling. In my opinion, luxury is products that are beautiful, elegant, and represent the culture. It’s born of love. Luxurious products should have an ability to grasp peoples’ hearts, and it is love that makes those products survive. I hope that people are buying my dresses because they love them and not because they want to show off."

Some of my favorites from 2012 and 2013.  I love how skillfully she blends traditional Chinese motifs with avant-garde silhouettes. 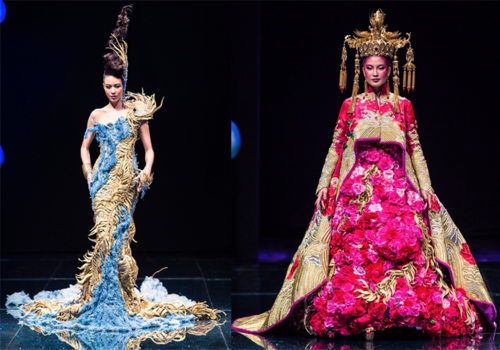 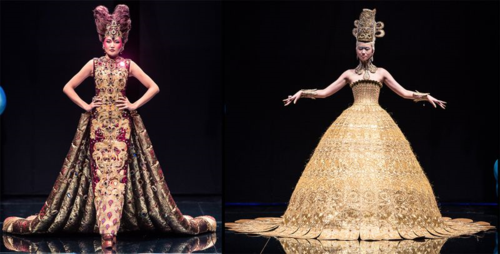 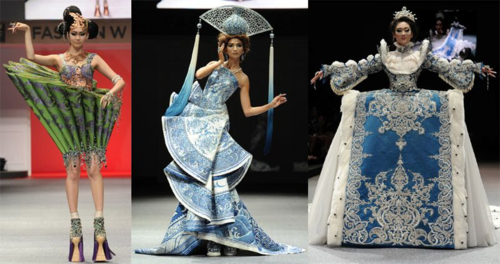 As with some of MAC's other designer collaborations (such as Toledo), the collection came about as a result of MAC creating the makeup looks for Guo Pei's runway shows. "MAC has been doing the backstage for every one of my fashion shows," she told Refinery29. "In China, we pay attention to feelings — when you've got common feelings with somebody and there's something between you. With MAC, it was a happy collaboration."

What I liked about this collection is not only the gorgeous, unique pattern - it was sketched by the designer herself specifically for MAC - but that it also had a distinct theme.  "The theme of the story is about happiness and the soul garden...the soul garden is full of fresh flowers, and it's up to you to tend to it and take care of that private space. A lot of people are very negative about life, and they don't pay that much attention to their inner soul garden." 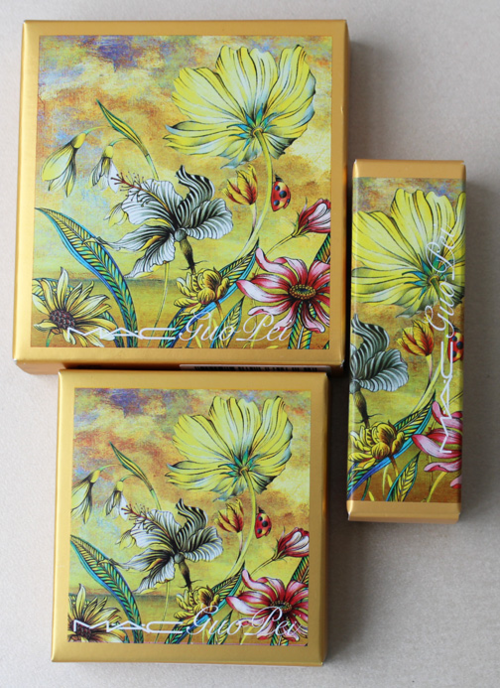 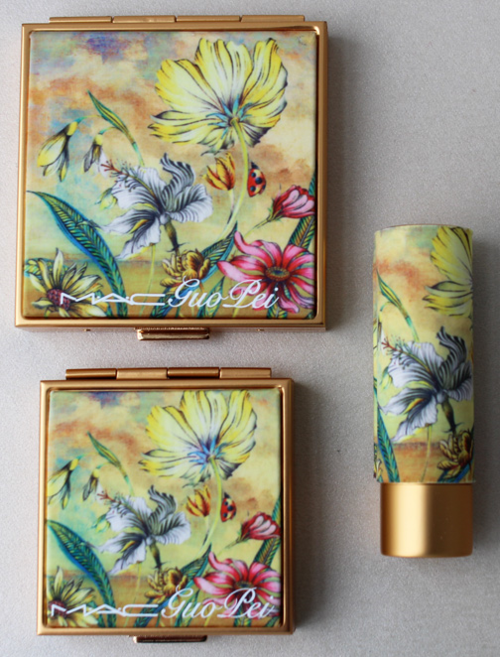 I so wish I could have purchased the Night Sky quad, but it was the one piece that I wasn't fast enough for despite camping out in front of my computer and refreshing the MAC website every two seconds for the collection to appear.  The reason I wanted that quad instead of this one is the significance of blue for Guo Pei in this collection.  "In the garden of van Gogh near Paris, I saw the blue flowers. This flower, to me, is what's in my inner garden. They're the flowers of happiness...I don't like being with the seasons and [paying attention] to what's trendy or not trendy — I don't want to be constrained by the time frame. To me, blue is a color I like and the color of the soul. I think a touch of blue in the eyes is a smart color."  She also told New York Magazine's The Cut, "The choice of the colors gives me a sense of power. I was inspired by the colors of the universe. Blue is a very important color because it is a color of the soul. It’s also the base color of the universe and our world. I chose pink and coral for the lip colors because I think they are colors of happiness. I want to affect the people around me with happiness." 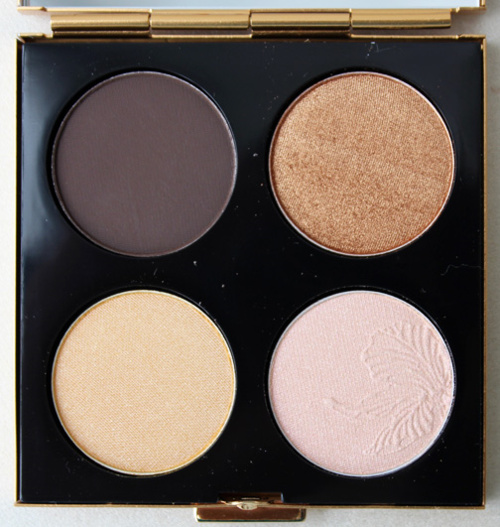 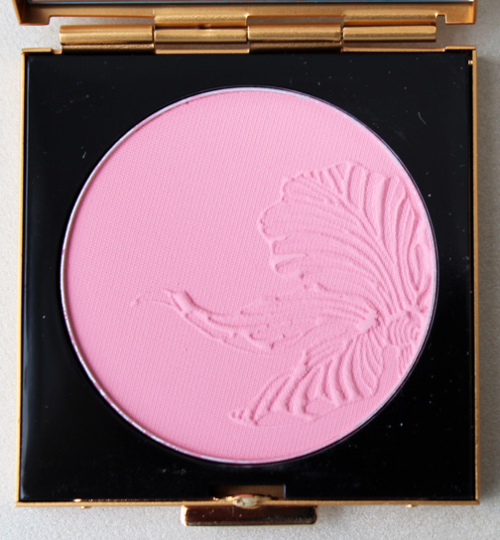 Not only did she sketch the pattern herself, Guo Pei also made 8 dresses (!) as a sort of springboard for the collection's inspiration.  She explains, "There is a Chinese saying, 'There is a kingdom in a flower; a wisdom in a leaf.'  I always find the power of nature fascinating, especially when the flowers are blossoming. The idea inspired the creative process of the dresses for MAC. I finished my preliminary sketch in my study on one quiet afternoon without a break. However, while the drawings were beautiful, they lacked completeness. Then one day, my daughter showed me a set of extraordinarily beautiful pictures of the Milky Way. The intoxicating colors of the universe sparked a power of life in my soul... I captured the energy and created eight dresses for MAC - 'Garden of Soul.' Based upon the eight dresses, we developed this beautiful makeup collection."  I was able to gather images of the sketches and dresses, which were revealed at a very fancy dinner on May 5, the day after the Met Gala. 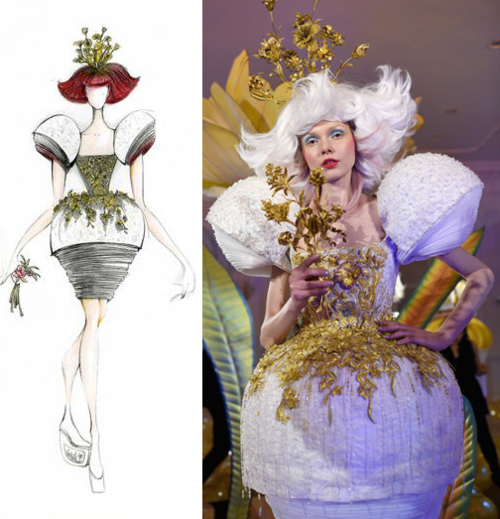 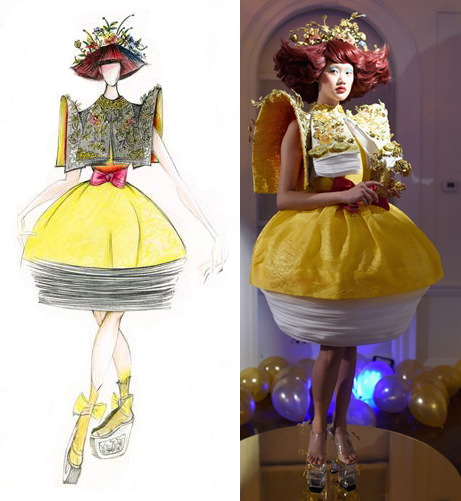 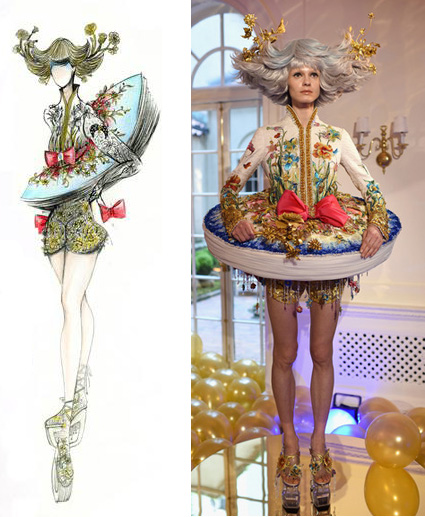 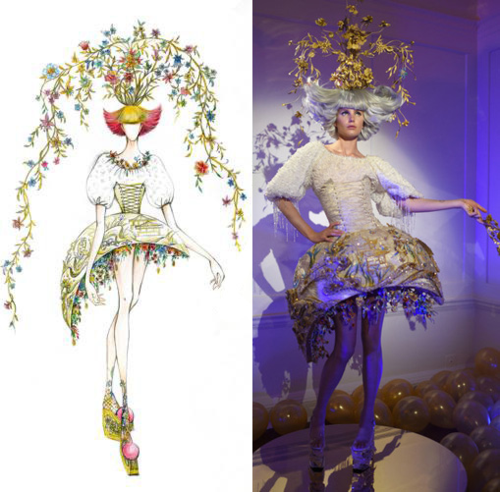 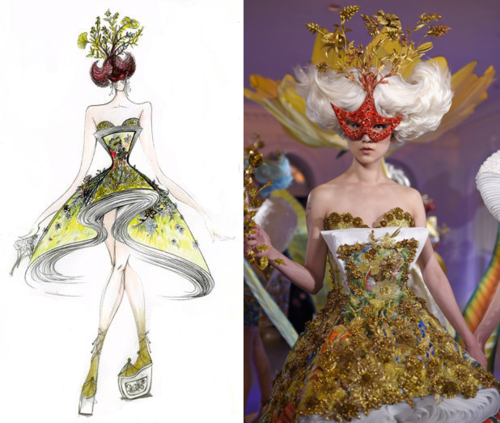 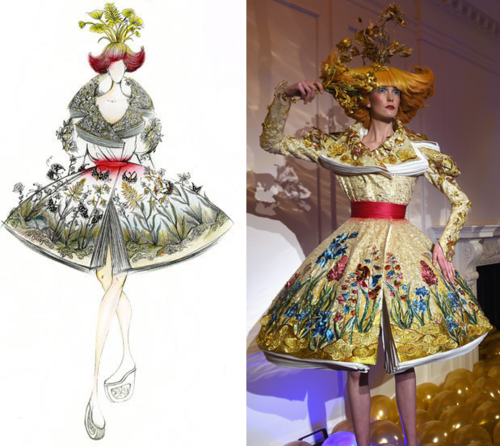 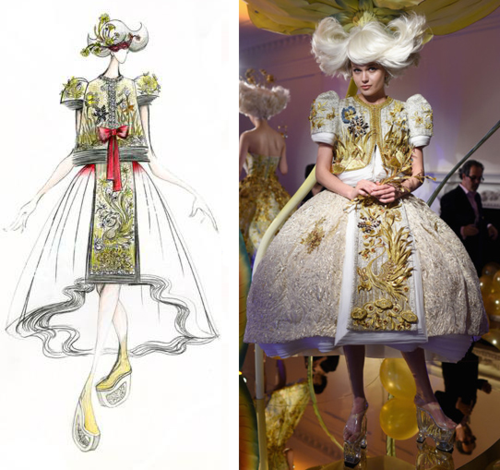 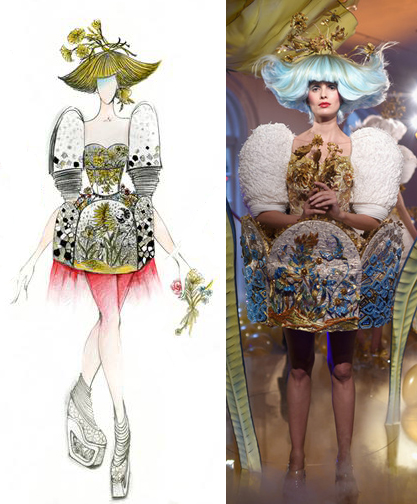 (images from chicprofile.com and zimbio.com)

The colors in both the dresses and the models' makeup are definitely well-represented in the MAC collection, while the heavy use of gold in each dress corresponds to the MAC packaging.  I also really like that actual fabric was used in the packaging - being able to manipulate fabric in unusual ways is an essential skill for haute couture, so I liked the nod to fabric's importance in Guo Pei's work.  Overall I think this is one of the prettiest collections MAC has done in the past few years, and unlike some designer collabs (ahem, Philip Treacy), the designer's work is reflected quite nicely.

What do you think of this collection and of Guo Pei's work?