Let's see what we have in the ol' Makeup Museum mailbag today, shall we?  Actually this inquiry came in about 2 years ago (I know, I can't believe I'm just getting to it now) and allowed me to learn more about Peggy Sage, a brand I wasn't all that familiar with. The person who wrote didn't provide any information about where or how she acquired this vintage manicure oil, but I could tell from her email signature that she is Dutch, so that's pretty cool that I had an inquiry all the way from the Netherlands!  She did give a picture though. 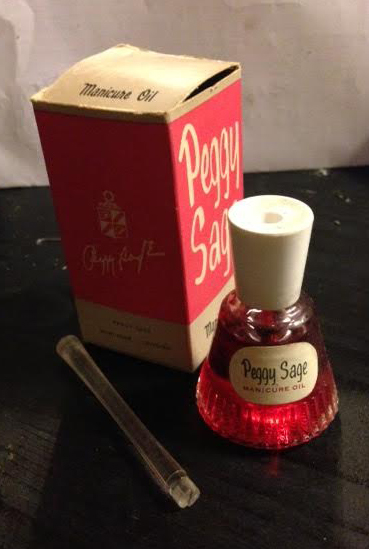 So off I went in search of information about the company and to try to find an approximate date for the oil.  Fortunately Peggy Sage is still around and has a website, where I was able to get a little history.  Peggy Sage started in 1925 in the U.S. and was one of the first beauty companies to specialize in nail care.  It soon moved to Paris and was very popular there as well.  In the 1950s it reached peak popularity, holding its own with Cutex and other similar nail care and cosmetic brands.  In 2000 the brand was revived and now has several "concept stores" throughout France and Switzerland.  I wish I could find more about Peggy Sage herself (was she even a real person?) but there was scant information about the founder.

As for the bottle of manicure oil, I'm guessing it dates from anywhere between the early '50s through the early '60s.  I looked at a plethora of ads and it looks like that bottle shape did not appear until about 1951.  Prior to that year, the ads show a more square bottle. 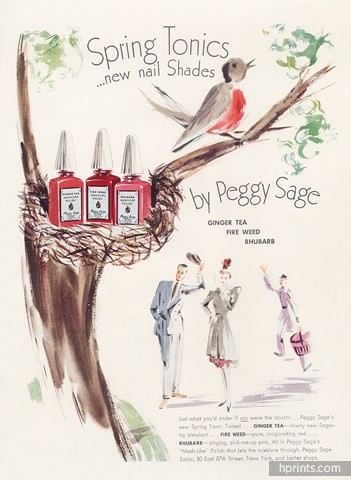 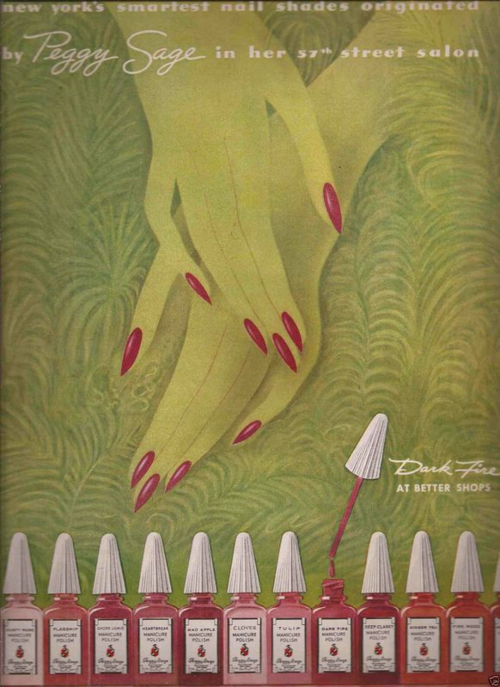 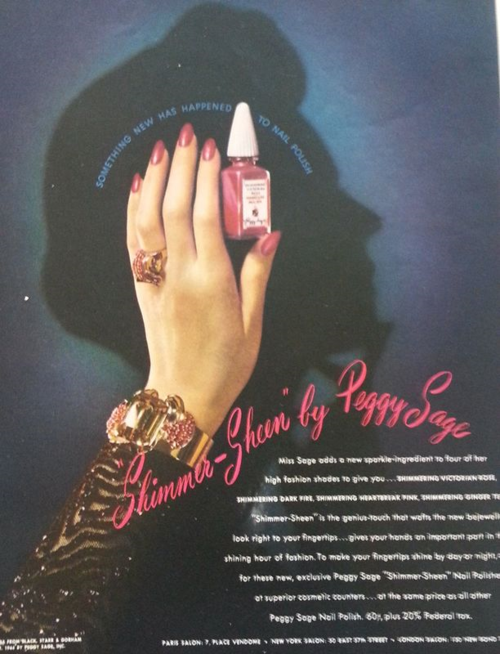 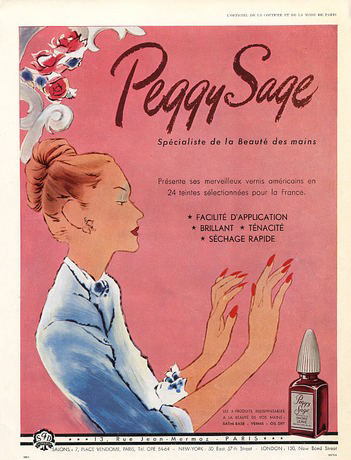 My theory is that a new bottle was introduced in the early '50s to distinguish the brand's new "Crystallin" finish polishes from their regular line of polishes, as the older square bottle shapes were still being used in ads.  Only ads for the Crystallin (or "Cristal", as they were known in France) polishes showed the more flared bottle. 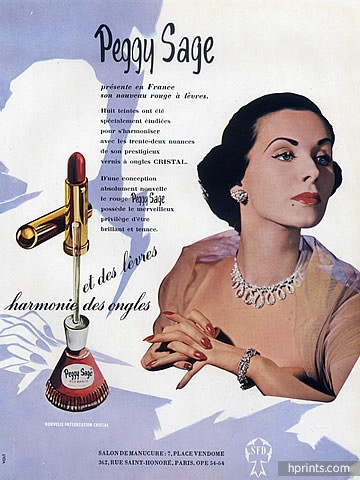 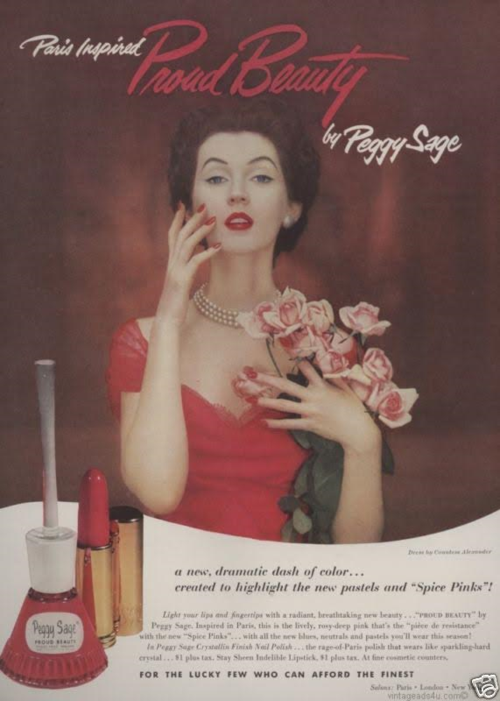 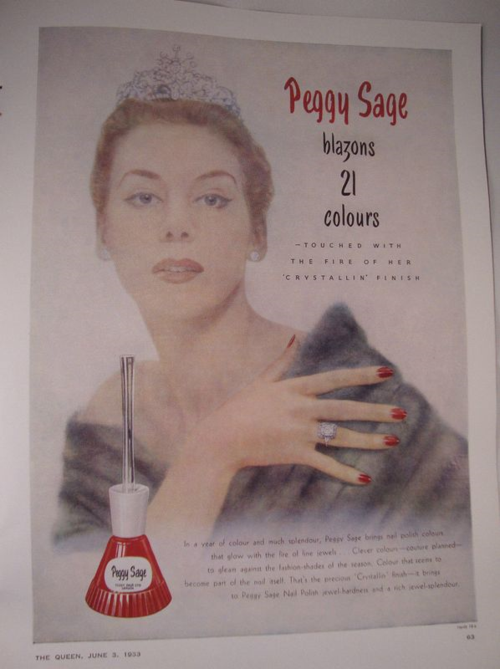 Additionally, this ad from 1953 - most likely related to Queen Elizabeth II's coronation in June of that year - boasts several shades housed in the "new plume bottle", which is the same bottle shape as the manicure oil. 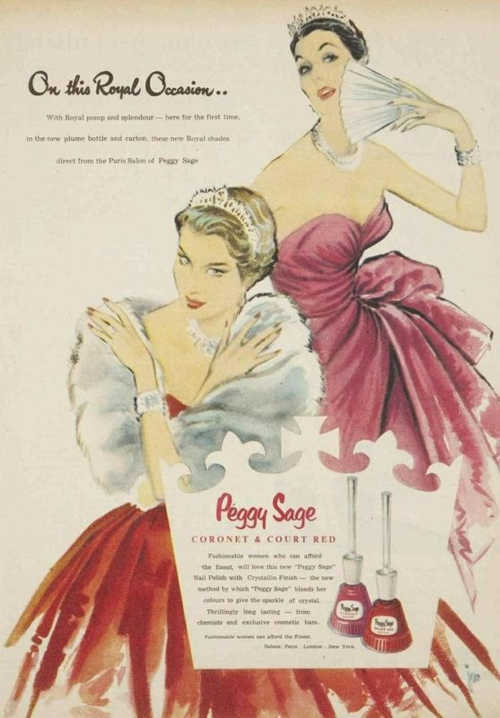 So maybe this shape was also used for the manicure oil to distinguish it from their nail polishes, or the oil was meant to be used specifically with the Crystallin polishes.  In any case, I'm not sure when the "plume" bottle shape was retired, but it was used at least until 1960, when this Australian commercial for "Fiery Pink" aired.  So dramatic!

So that is what I was able to come up with.  Do you agree with my theory?  And which bottle shape do you prefer?  I have to say I'm partial to the "plume" bottle - reminds me of a fancy flared skirt.  :)