I thought I'd offer a palate cleanser today after yesterday's somewhat depressing post.  Let's take a peek at some pretty little watercolor illustrations from Australian artist Kerrie Hess.  While the two collections I'll be focusing on were released way back in early spring, I still thought they were worth writing about now since the illustrations are so utterly charming.

While Hess enjoyed her early career as a graphic designer, she soon realized that fashion illustration was her passion. (I'm sure her sister's work was also an inspiration).  In addition to her regular graphic design job for London's The Independent newspapers, she also worked on small commissions for her illustrations.  It wasn't long until they got the attention of the fashion world, and soon Hess was creating campaigns for the likes of Neiman Marcus, Louis Vuitton, Chanel and Alexander McQueen.  Eventually she began collaborating with non-fashion companies like Le Meurice Hotel (where, incidentally, the husband and I stayed for our honeymoon!) and Ladurée.  Now Hess has also made her way into the world of cosmetics.

First up is Korean brand Etude House's Dreaming Swan collection.  Hess created a lovely ballet theme with loads of feminine touches - lots of pink, bows, even a hint of tulle. 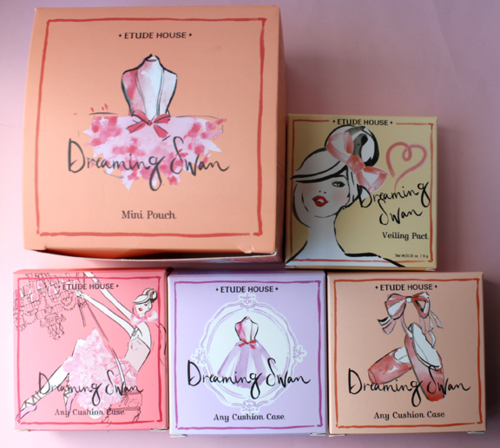 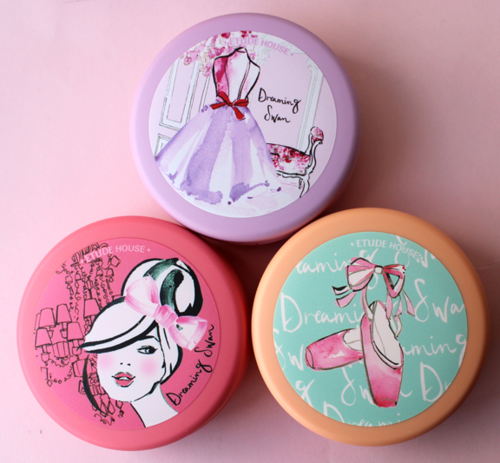 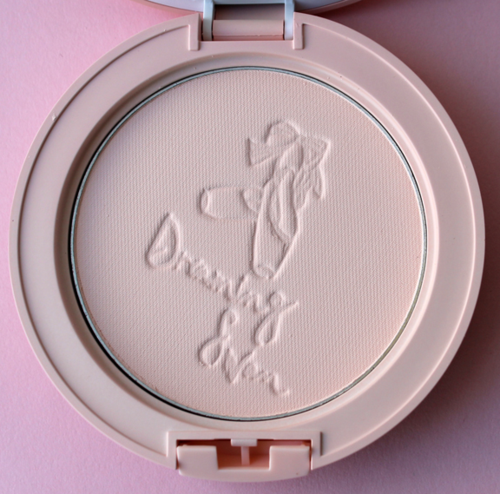 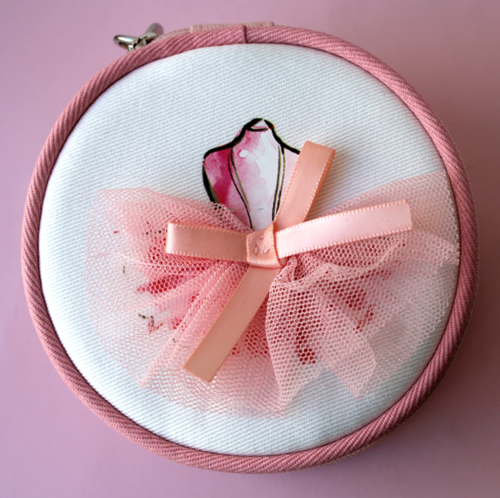 While Hess's work is chic and fashionable (she names Grace Kelly as an inspiration), there's definitely an effortlessness about it.  Indeed, as you watch her work on the Dreaming Swan collection, the dabs of paint seem to flow from her brush with great ease.  In an interview with TOTOI, Hess states that while her uncomplicated style stems partly from the fact that she's been drawing from an early age, she also never felt compelled to make a "perfect" drawing.  "I did weekend art classes from about 5 or 6 (in my fluro bike shorts no less) and I absolutely recall my teacher telling me that you are never drawing things or people, only shapes and lines. I like this, it takes the pressure off trying to be perfect; and it still stays with me. I also think that it’s the imperfections in an art piece that can really make it.  A little smudge here or there links back to the piece being done by hand."

Prior to the Etude House collaboration, Hess did a collection for Lancôme in honor of their 80th anniversary.  While I'm peeved it was exclusive to Australia, I can't imagine a better match for this collaboration.  Hess was born and raised in Australia but lived in Paris for over a year.  Calling it her home away from home, she is able to perfectly capture the sophistication and style that are unique to the City of Lights.  About being selected for the collaboration, she says:  "As my illustration aesthetic is very French, all about couture, beauty and Paris, we were a perfect match...I love the sense of history of the Lancôme brand and have always used the products myself. It was also really wonderful as an artist to be given a lot of creative license from Lancôme.  I always feel that I do my best work when this is the case. And with that trust I wanted very much to create really beautiful images to represent a brand that I personally admire.  I hope I have really captured the city of Paris in all of the images, Lancôme being so associated with the city of lights and made the products that we have collaborated on, ones that people will want to keep as much as use."  I personally think she nailed it, but have a gander at her work below and decide for yourself. 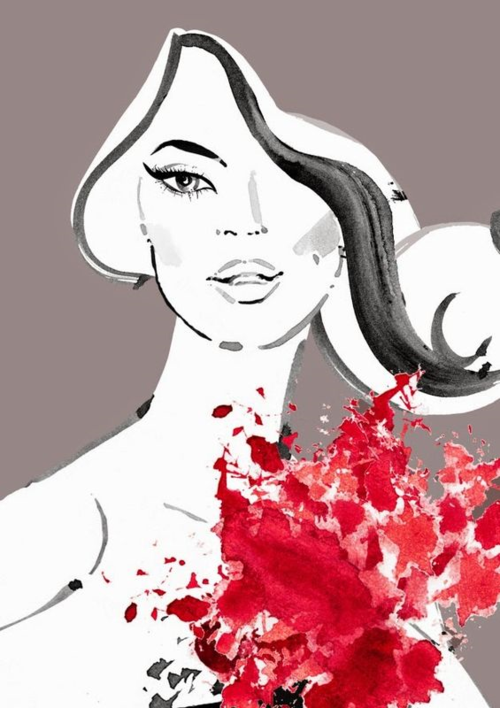 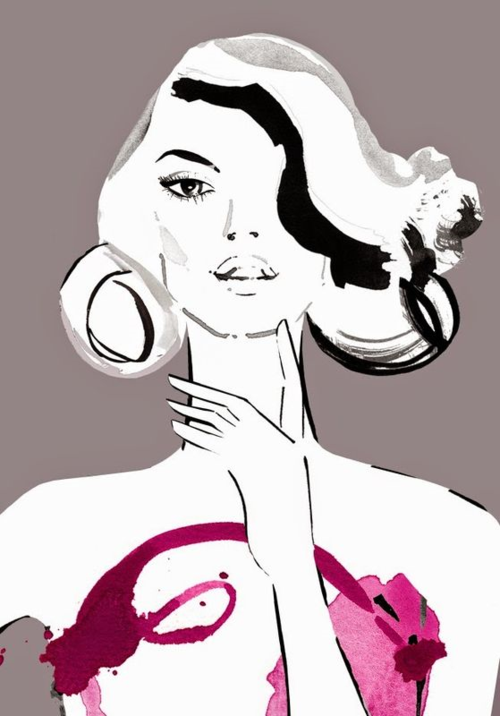 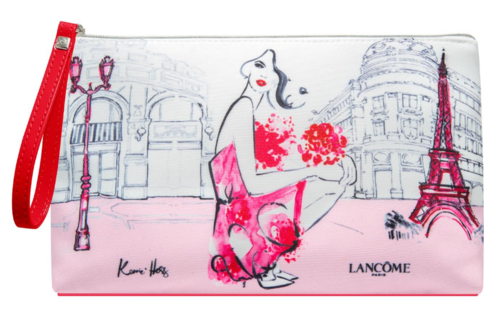 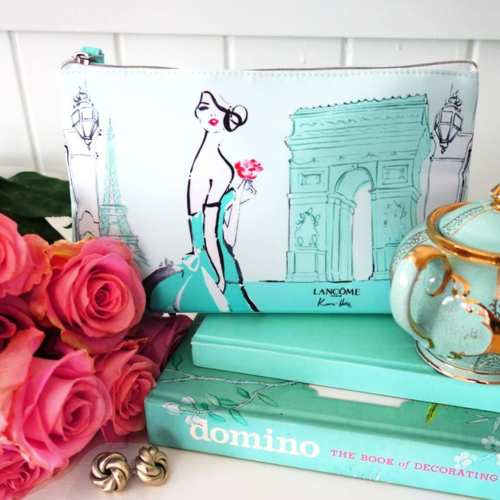 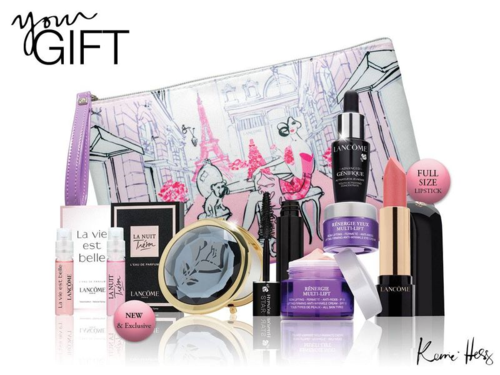 (images from spoiltblog.com and facebook.com)

Additionally, the Lancôme collaboration gave Hess the opportunity to add a little more color to her models' faces than she normally does.  She explains, "Working with Lancôme has inspired me to become a bit more dramatic in my illustrations, with dark eye make-up and red lips, whereas I used to keep my faces bare to keep the spotlight on the dresses.”

I really like how Hess is able to adjust her aesthetic to fit both brands.  The Etude House Dreaming Swan collection was very girly and clearly meant for their teenaged demographic, whereas the more high fashion-inspired, Parisian-themed Lancôme collection would appeal to women in their 20s and older.  And she also emphasized the cosmetics aspect in each by adding some color to the models' pouts (pink for Etude House and red for Lancôme.)

I'm currently browsing her Instagram and online print shop...I'd seriously consider buying this one if it wasn't sold out!  What do you think of these collections and Hess's work overall?