Book review: Read My Lips: A Cultural History of Lipstick

Here's a nice little addition to your makeup library.  Read My Lips:  A Cultural History of Lipstick (1998) explores the cultural significance of the world's most popular cosmetics product.

I was initially a bit concerned I wouldn't finish the book based on the rather clichéd, over-the-top introduction, which was written by a different author than the rest of the book. "Just try this test:  At the end of a meal in a restaurant, absentmindedly reach for your lipstick, uncap it with a quick nudge, twist the wand out of its cartridge, and stare at it briefly.  You'd think you pulled a gun.  All eyes are on you.  Sigh wistfully and look up.  How so much drama can be contained in such a small gesture, I don't know.  But there you have it."  This paragraph made me roll my eyes so hard they almost got stuck in my head. Reapplication isn't THAT attention-getting, or rather, it shouldn't be - no one is looking at you, and if they are, they're probably thinking you're rather gauche for making a touch-up so dramatic.  Just do a quick discreet swipe and be done with it.

Anyway, despite this blather I kept reading.  To my great relief I found the actual content of the chapters far less insipid than the introduction.  Chapter 1 gives a brief history of lipstick spanning from ancient Egypt to today.  Snapshots of lipstick trends in each decade in the 20th century are provided as well.  Hardly any of the content was new information for me, but a concise overview on hand is always useful.  One of the more notable facts for me, as I believe there's a significant connection between fashion and makeup, was the author's assertion that lipstick started being swayed by fashion trends in the '50s.  "Lipstick also began to take its cue from fashion...cosmetics companies looked to fashion designers to predict the shades of the moment.  This trend was strongly encouraged by Vogue, which would introduce a color for the season and then persuade cosmetics manufacturers to supply complementary shades."  In terms of helping shape a beauty museum, it's quite helpful to know when the important relationship between makeup and fashion started.

Chapter 2 is a primer on the nitty gritty of lipstick:  basic ingredients, production, shapes and textures.  One thing I wasn't aware of previously is that the various shapes of lipstick bullets actually have names. The kind that's angled on both side of the tip is known as a fishtail, while the pointed tip angled on one side is a teardrop.  A more rounded tip angled on one side is a wedge.  I knew about lip gloss applicator names (doefoot, etc.) but had no idea that lipstick bullets had them as well.  This chapter also includes a few pages on the harmful ingredients initially used in lipsticks, and how they weren't banned until the government thought it might affect men (no surprise there).  "It wasn't until 1924, when the New York Board of Health considered banning lipstick - not ironically because of the harm it might cause the women who wore it, but out of fear that it might poison the men who kissed the women who wore it - that the government finally stepped in."  Lovely.

Chapter 3 was probably my favorite, since it talks about the rise of lipstick advertising (including celebrity endorsements), brands launched by makeup artists and cosmetic companies' charitable efforts. 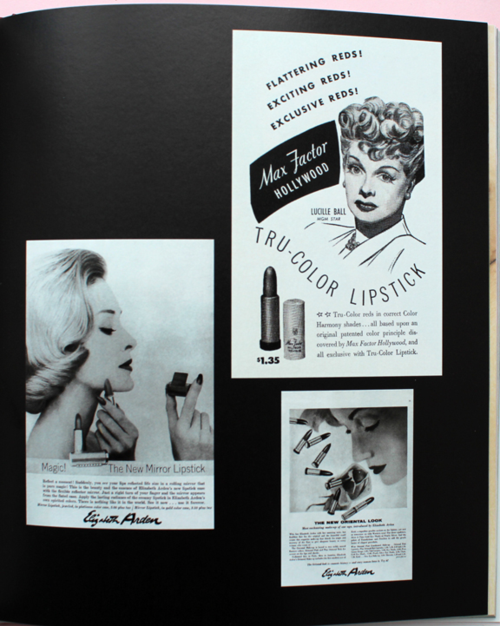 Chapter 3 was also my favorite since it included a few pages on shade names, which is a topic I will hopefully cover in a few weeks. (I drafted the post over 2 years ago and just keep adding to it.)  Jean Ford, one of the founders of the ever-amusing brand Benefit, explains the inspiration behind two shades named Indecent Exposure and But, Officer:  "I had just gotten out of traffic school, so the line was all about things you could get arrested for...But, Officer is a real ingenue color, a fleshy tone, like you're really innocent."

Chapter 4 discusses the meaning of lipstick for the average woman, providing anecdotes on its significance and in some cases, power.  "The simple gesture of applying color to the mouth represents myriad emotions.  It transforms a woman from her private to her public self, prepares her for the world with one quick smear of the waxy substance."  This was probably the weakest chapter, as I feel there have been much more in-depth pieces written on the subject of lipstick's meaning.  Additionally, there is a rather meager exploration of red lipstick, which I also think has been covered better elsewhere, such as in Jean-Marie Martin Hattenberg's Lips of Luxury (see my review.)

The book redeems itself in Chapter 5 with an informative review of lipstick's influences on art and pop culture.  Songs, scenes from TV and movies, sculptures and paintings inspired by lipstick are covered, which will be invaluable for my Makeup as Muse series.  There were actually a few art pieces that I hadn't heard of previously.

My final thoughts:  This is an excellent overview of the general history of lipstick, but it wasn't meaty enough for me.  Each of the themes could have been a book on its own; instead, they just barely scratched the surface content-wise.   However, if you're looking for a quick read or a primer for someone who wants basic information on lipstick as a cultural icon, this is perfect.  Because it's not all that in-depth, I could see this being of interest even for someone who's not a beauty junkie.  So it's definitely good to have on your makeup book shelf.  I do wonder how it stacks up to Jessica Pallingston's Lipstick:  A Celebration of the World's Favorite Cosmetic, which looks like it was released a mere two months before Read My Lips.  Judging from its tale of contents the two tomes appear rather similar, so stay tuned for a review and comparison.  :)

Are you intrigued by this book?

Posted at 09:37 AM in Books, Cosmetics history | Permalink | 0 comments