Ah, e-bay, what would I do without you?  Guerlain's Poudre de Soir highlighting powder was not available in the U.S., so I was very happy to see it pop up on e-bay.  Initially I was not bowled over by the pinwheel design, but as I looked closer I realized this wasn't any old pinwheel but one that was rendered to resemble a delicate piece of origami.  And I knew I HAD to own it then. 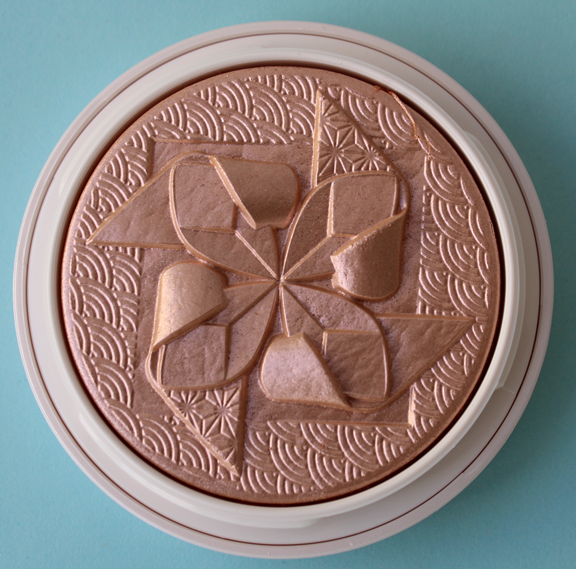 I also liked the pattern of semi-circles in the background, which, as Lizzy at So Lonely in Gorgeous explained, is called Seigaiha, a traditional Japanese pattern of stylized waves.  If you look closely, it looks like there's also an asanoha pattern on two of the ends of the pinwheel - a star-shaped pattern named for the hemp plant (asa). 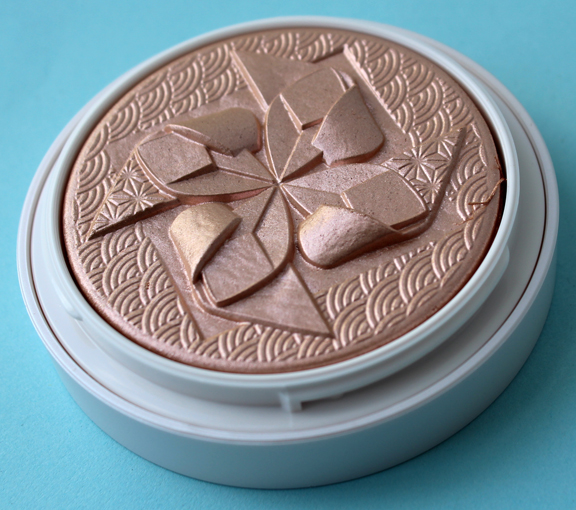 Unfortunately I couldn't dig up any cultural significance for the pinwheel in Japan so I was scratching my head as to why Guerlain chose this particular motif.  The item description claims that it's a "sculpted silk bow" that was "inspired by the most beautiful Asian fabrics and the ancestral art of origami."  I don't know about you, but I see a pinwheel, not a bow!

Anyway, in lieu of figuring out the exact inspiration for this piece, I thought I'd share some really cool origami that I came across recently.  Did you know there's a whole origami technique called wet folding?  It was pioneered by Akira Yoshizawa (1911-2005), one of the best-known origamists in the world (yes, "origamist" is a word, no matter what spell check says!)  It's basically what it sounds like, although a sturdier paper is used:  the artist applies varying amounts water to the paper during the folding process to yield a mix of soft, curving lines and the usual sharper, creased angles by keeping those parts dry.  About a month ago Colossal featured some new pieces by  Hoang Tien Quyet, who uses a wet folding technique to create all sorts of shapes.  As the article notes, wet folding "gives the paper works a more realistic appearance, adds a rounded quality to the origami, and allows it to appear malleable even though the pieces dry into hardened forms."  What Quyet was able to accomplish using this technique is remarkably inventive. 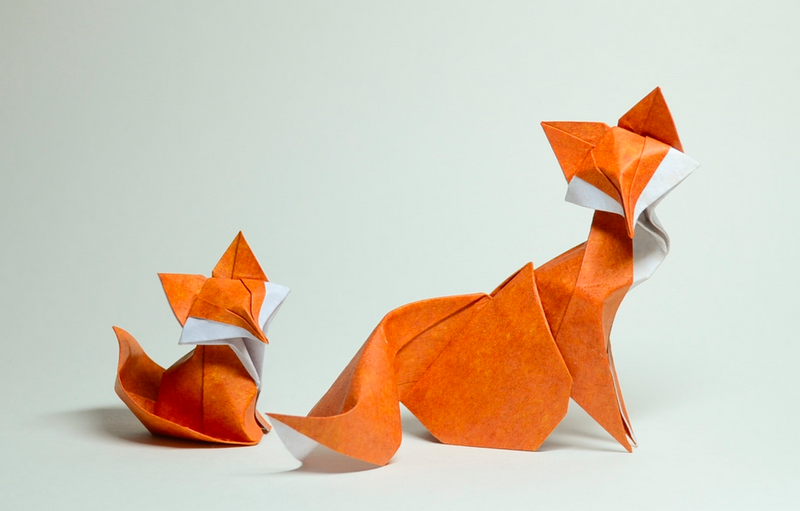 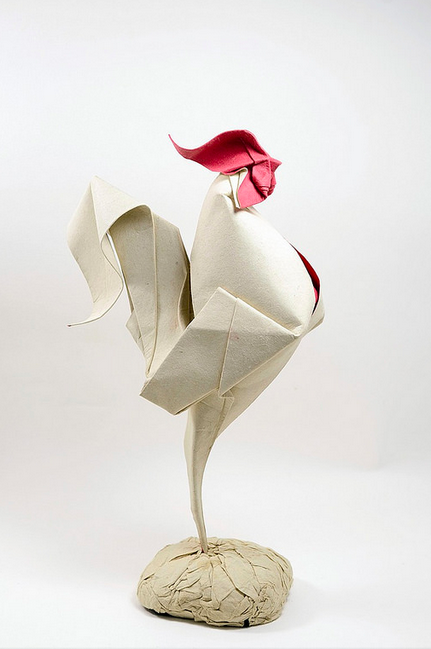 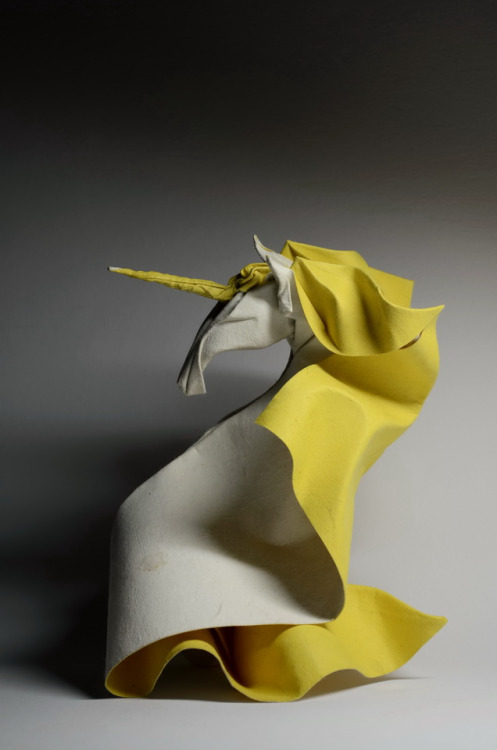 My favorites were the sea creatures - would love to see his take on an octopus or jellyfish!  Or a mermaid...he made a unicorn so it's not entirely inconceivable. 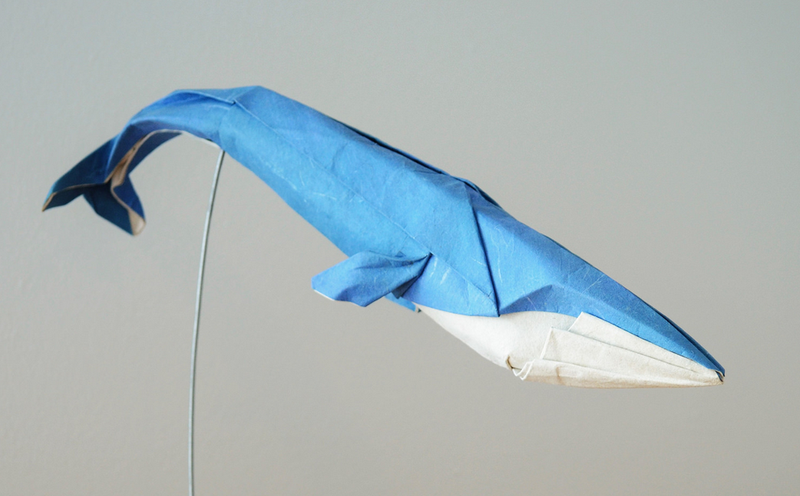 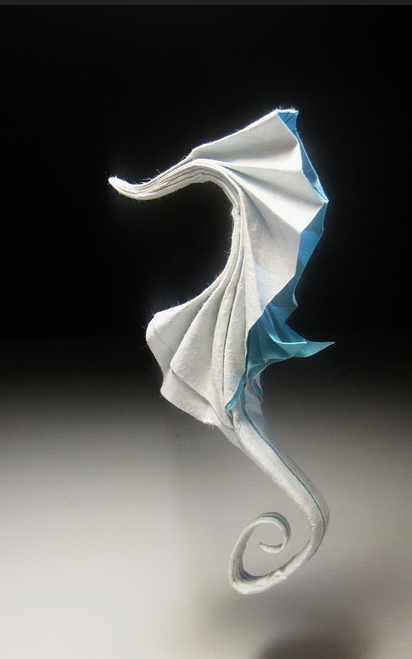 (images from  htquyet.origami.vn and flickr.com)

What do you think of the Guerlain highlighter?  And have you ever done origami?  I tried when I was little and I was awful at it, but I loved all the colorful paper.  And if anyone knows the meaning of pinwheels in Japanese culture or any other Asian cultures, I'm all ears.

As you can tell from the lack of posts for nearly all of June I've been busy.  I don't even know with what, I just know work always leaves me too drained to do anything in the evenings and I've had other stuff keeping me occupied for the past few weekends, so the Makeup Museum fell by the wayside.  Anyway, I can't promise that things will pick up around here, but I do know that I plan on getting the summer exhibition up next week, so there's that.  Now who's ready to catch up on lots of beauty news and other cool stuff?

- Heathrow Airport compiled a chart of the most-purchased lipstick shades in 50 cities around the globe. Interestingly, the results are pretty varied.

- Here's a must-read article on Helena Rubinstein that explores whether her beauty business was empowering for women.  I know the "makeup as empowerment" is a topic worth exploring and I really enjoyed this article.  But I'm basically over the debate at this point, especially after seeing this #ThePowerOfMakeup campaign on Instagram.  Why does makeup have to be empowering?  Why can't we just enjoy wearing (or not wearing) makeup?  Hmmph.

- Olivia at The Unknown Beauty Blog traces the history of the Westmore family, who were responsible for establishing the art of cinema makeup, while Gio at Beautiful with Brains lets us in on the beauty secrets of Marie Antoinette.  Need more beauty history?  Check out the latest installment of Jezebel's makeup by decade series, which covers the '40s.

- Speaking of beauty history, here's the parody you've been waiting for.  Finally!

- Into the Gloss explores the relationships between several female artists and makeup.  Spoiler alert:  Georgia O'Keeffe would have none of it.

- I'm curious to know which would have a lower price tag for a day of beauty treatments, the new Chanel spa in Paris or this nail salon that offers a $25,000 manicure.

- This vlogger offered an unusual way to keep track of what you did during the week.

- When kids get into makeup.

- Abbi Jacobson is keeping herself busy between Broad City seasons by illustrating two coloring books.  If you need more Broad City-related goodness, check out this interview with Mike Perry, the artist behind the show's animated intro.

- We got a sneak peek of the cover of Carrie Brownstein's memoir (can't wait till it's out!)

- In '90s news and revivals, Crystal Pepsi may be returning (fingers crossed!) and the A.V. Club had a whole week's worth of essays devoted to 1995 pop culture.  Meanwhile, a pop-up installation of the Seinfeld apartment opened, Clueless is becoming a musical, and photos from the new X-Files episodes are out. (I've been plowing my way through the original run via Netflix since I didn't watch it when it was on - gotta have my '90s fix!)

- In addition to X-Files, I've become addicted to American Pickers.  Also, I checked out the first episode of Another Period and it was pretty enjoyable, especially due to a massively funny joke at Baltimore's expense.

- Mmm...I am intrigued by this pizzeria located in the ocean near Fiji.  If I were a mermaid I could swim to it!

- Speaking of mermaids and Fiji, these these sculptures aren't the traditional "pretty" mermaids we know, focusing instead on the history of the Fiji mermaid (a.k.a. a monkey's head sewn to a fish's body that originated in the late 1800s).

- Cornell University has digitized issues of Harper's Bazaar from 1867-1900.  So cool!  (via Two Nerdy History Girls)

- New fashion exhibitions I want to see but won't be able to:  "Shoes:  Pleasure and Pain" at the V & A, "500 Years of Dress Historiography" at the Courtauld, and "New for Now:  The Origin of Fashion Magazines" at the Rijksmuseum.

- Here's a reminder to please be more careful when visiting museums. And for the love of God, don't use drones to take pictures.  (And I thought selfie sticks were bad.)

- I knew there was a reason why I follow over a thousand blogs.

Whew!  That was a lot of links.  If you've made it this far, how have you been?

Once again I have no recollection of what I was searching for when I unearthed this post featuring 25 exquisite vintage Shiseido ads over at a lovely illustration blog called 50 Watts, but oh, what a find.  I picked out a few of my favorites but you really need to check out all of the ads, as they are truly amazing.

I'd give my eye teeth to acquire either this ad or the products featured in it. 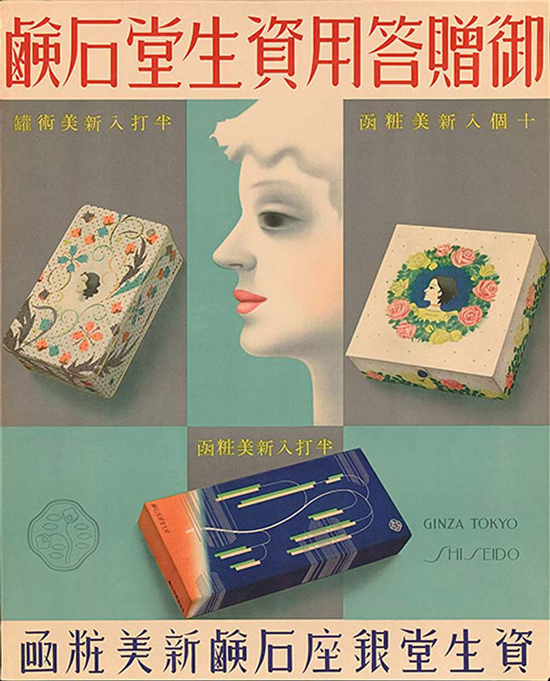 Such an ethereal scene...they really don't make illustrated ads like this anymore! 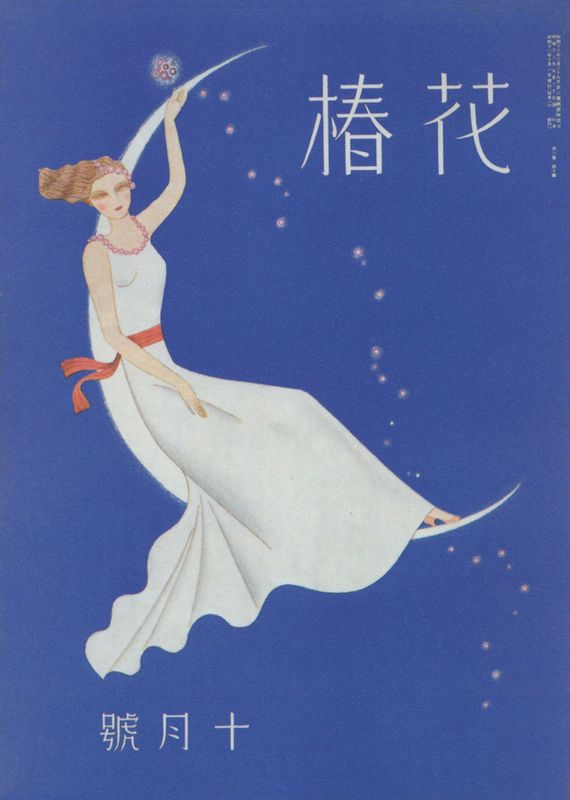 These last two from the '50s take quite a modern, graphic turn. 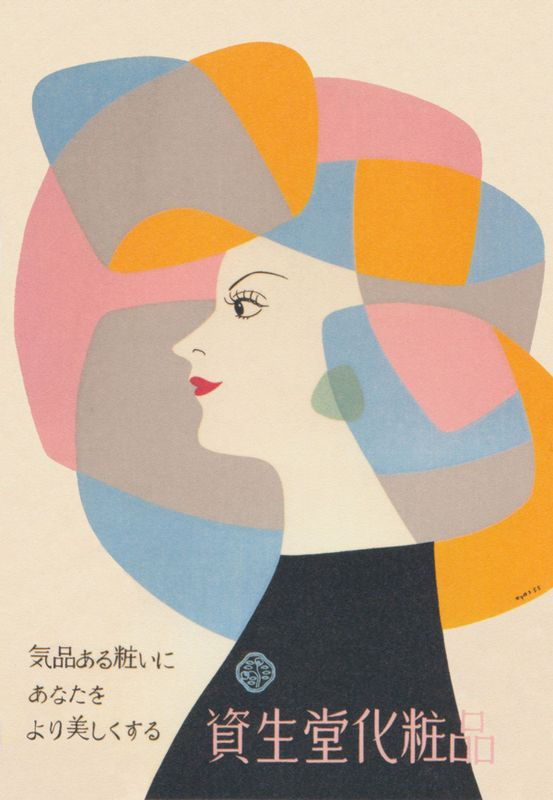 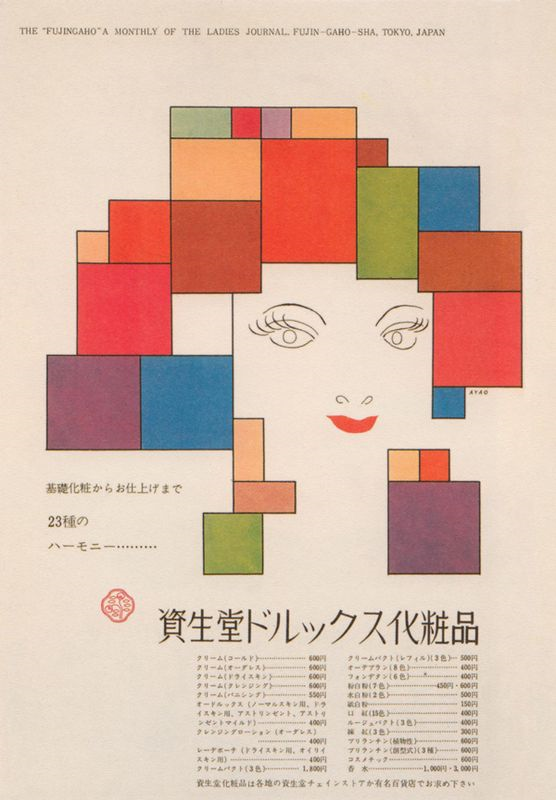 As you may know, Shiseido has its own museum, so it's not totally surprising that someone was able to get these images.  However, even with such a well-preserved history, I was absolutely floored to see an 84-page essay on Shiseido's advertising in the early 20th century, which is linked in the post at 50 Watts.  Gennifer Weisenfeld, a professor at Duke, authored "Selling Shiseido:  Cosmetics Advertising and Design in Early 20th Century Japan" for MIT's Visualizing Cultures curriculum (which sounds seriously awesome).  Because I'm a dork I printed out the whole thing so I can make notes on it as I read.  I'm only about halfway through - over 1200 subscriptions in Feedly takes up most of my reading time - but so far it's amazing so do check it out.  You also need to set aside an hour or so to take a gander at the image galleries, which include a staggering amount of even more ads, plus images of old stores and gifts from the Camellia Club.  And if you want to get really nerdy, you can download the handouts from the course.  Enjoy...and remember, as I've been saying for years, there's a place for beauty in academia and museums.  This is the best proof I've come across in a while.  :)