Hello.  Unless you've been living under a rock, you're probably aware that it's been quite a tumultuous week here in Baltimore.  So I thought I'd let you know that I'd like to have been blogging but since I both live and work downtown I've been very distracted with what's going on, plus sleep-deprived.  I haven't slept well since the convenience store in my building, which we live directly over, got looted last Monday.  (I'd show some pics but that would be akin to posting my home address.)  Needless to say I was rattled by witnessing part of the building get destroyed mere feet from where I was standing, as I was in the living room when I looked out the window and saw a large group of teenagers running through rush-hour traffic towards the building.  It's very unsettling to have your home surrounded by an angry mob and feeling the floor vibrate from the destruction going on right beneath you.   The husband and I went outside about an hour afterwards to assess the damage and help clean up what we could and I saved a little shard of glass.  I don't know why. 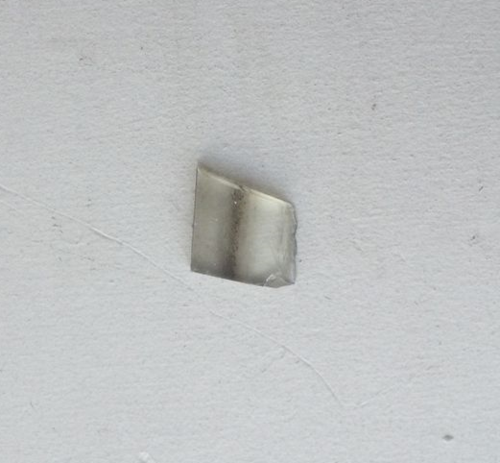 We didn't sleep at all that night, especially as our property manager advised us to "keep the lights off and pray" and I spent the last week barely sleeping since I was terrified they'd be back to torch the place.  I'm always petrified of fire anyway so the rioting only exacerbated my fear...not to mention a guy got caught using a crowbar to pry off the plywood used to board up the store the following evening (fortunately the police were monitoring the security camera at the intersection near the building and arrested him before he he had a chance to get in.)  Plus seeing vehicles like this parked outside my home throughout the week is also unsettling.  Poor Sailor Babo - I had to explain to him that it wasn't a funny-looking ice cream truck. 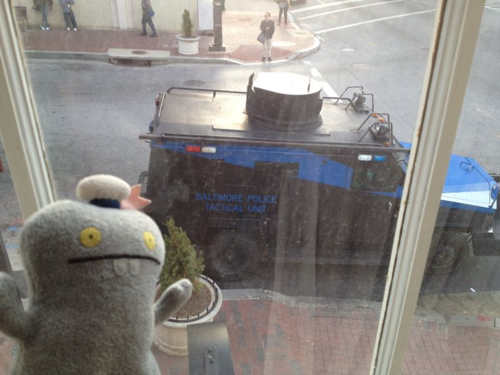 I hope to get back to regular posting later this week.  Most importantly though, while I've told you my experience, it's not about me.  It's about the much larger issue of police brutality, especially towards people of color, and in this case some members of the Baltimore police force are ultimately the ones to blame for the unrest.  None of this would have happened if they hadn't, you know, arrested someone on false charges and then proceed to injure him so severely that he DIED in custody.  Combine this outrageous act with decades of poverty in certain areas of the city and systemic racism, and it's no surprise some people rioted.  I don't condone it at all, especially since some businesses may never recover, but I understand why it happened.  It's also important to remember that by and large the protesting was overwhelmingly peaceful.  But I still think the whole Freddie Gray situation was just so messed up, and I hope real change is on the way.