It's been a while since Smashbox has collaborated with an artist, their previous partnership having taken place in early 2013 with Curtis Kulig.  Most recently the company teamed up with Donald "Drawbertson" Robertson for a collection of lipsticks and eyeliners.  Back in the fall Robertson had designed a limited-edition lipstick case for Smashbox (as well as a Cadillac adorned with a lipstick print) but it was this larger collection that got my attention.

I picked up 4 of the 6 lipsticks - really wish I could have gotten all of them for the Museum, plus all the liners. 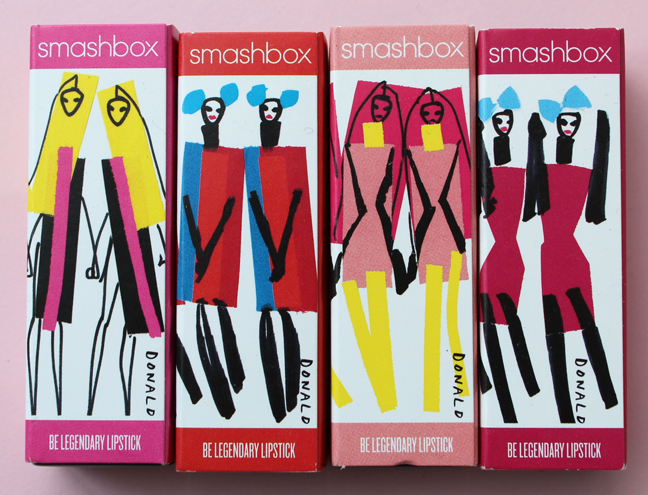 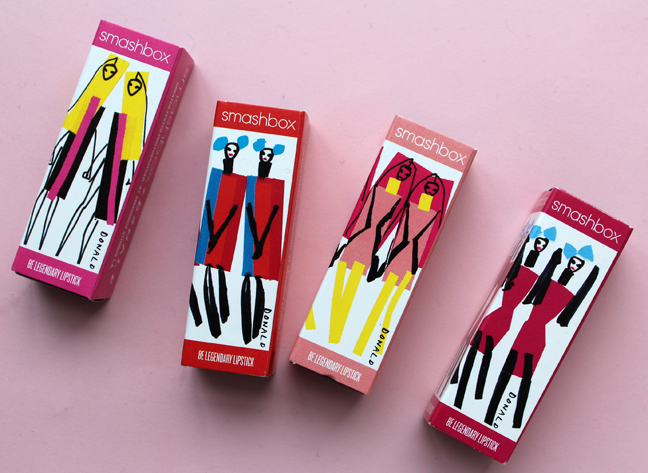 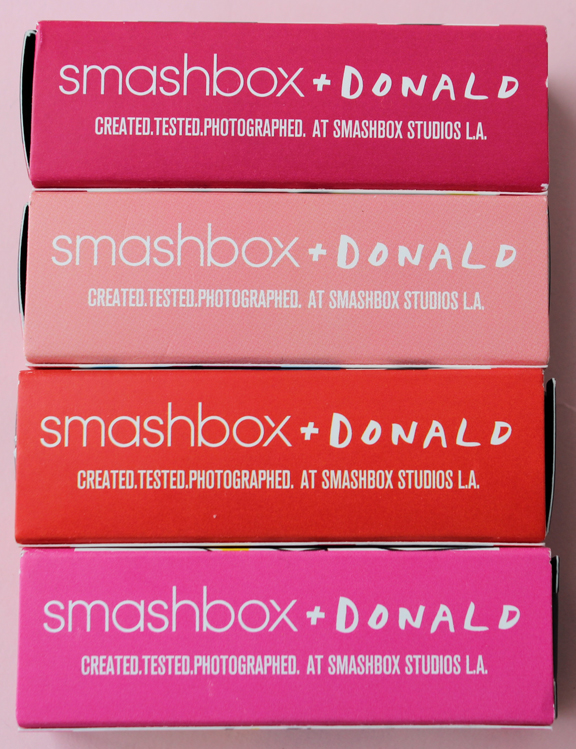 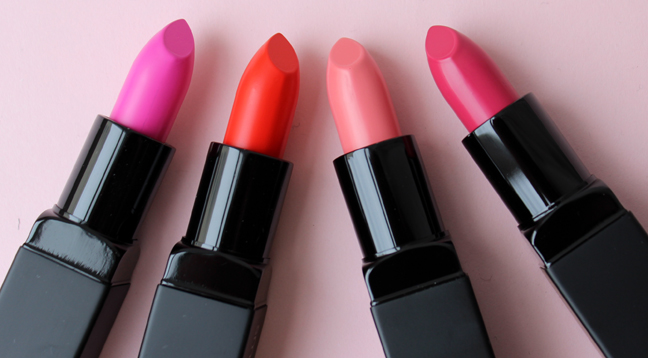 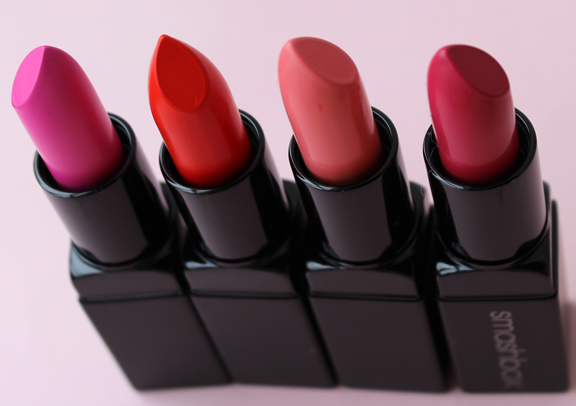 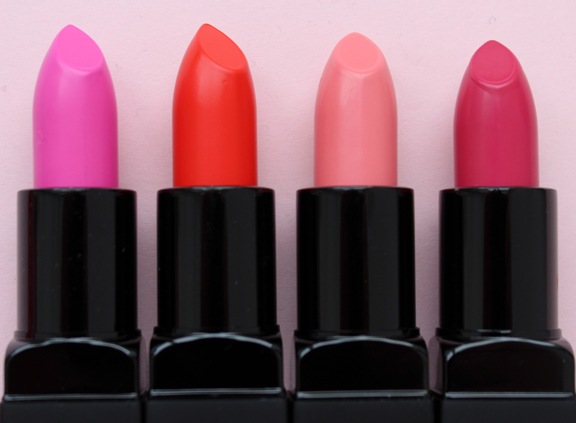 Here are the other two lipsticks, plus a tote bag filled with other items.  It would have been great if the tote bag was sold separately.

What I like about the Smashbox collab is the fact that Robertson created new drawings specifically for the collection - no re-using old images here.  In an interview with Glamour magazine (where he previously worked), he states,"We needed to top the Caddy covered in my lip paintings that we did for Art Basel earlier this year, so we decided to do a mini art show with the lipsticks and liners. They’re [like little presents] wrapped in tiny Donald paintings.” 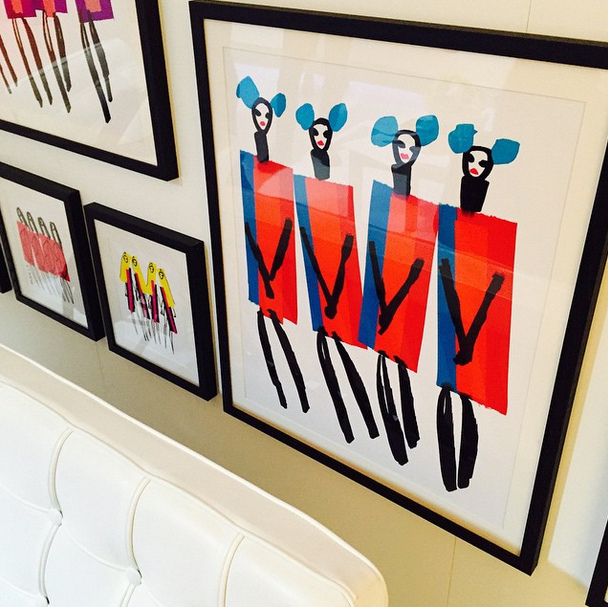 Not only that, Robertson also made five large-scale paintings for Smashbox's grand reopening party on February 5, 2015. 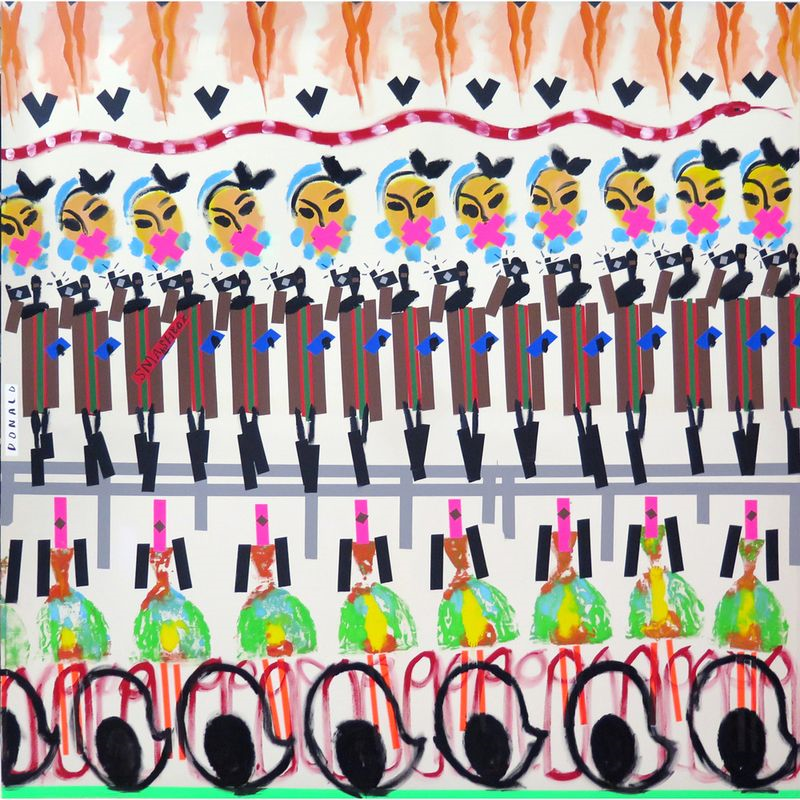 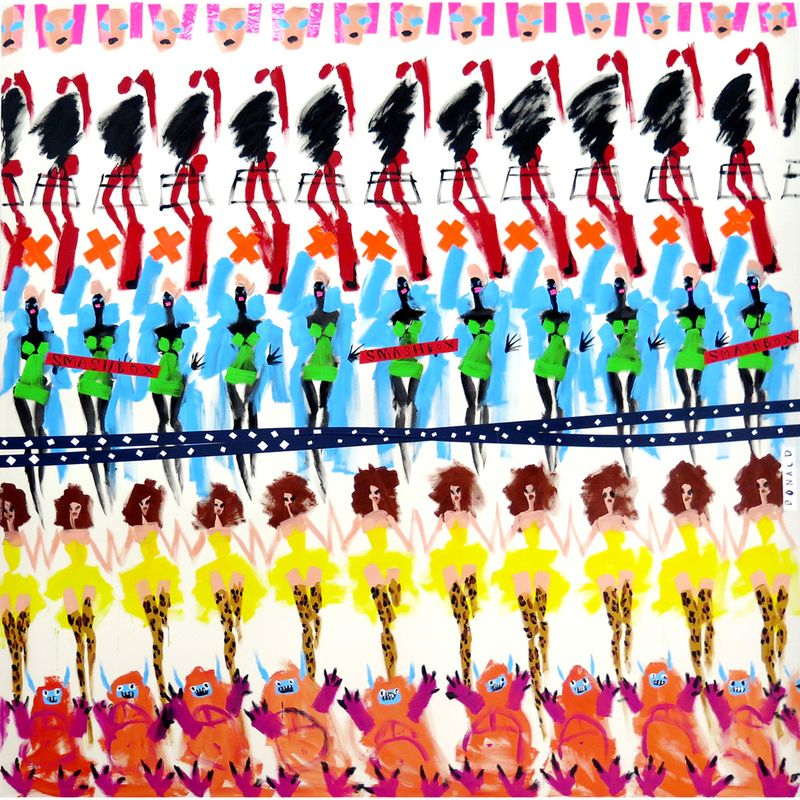 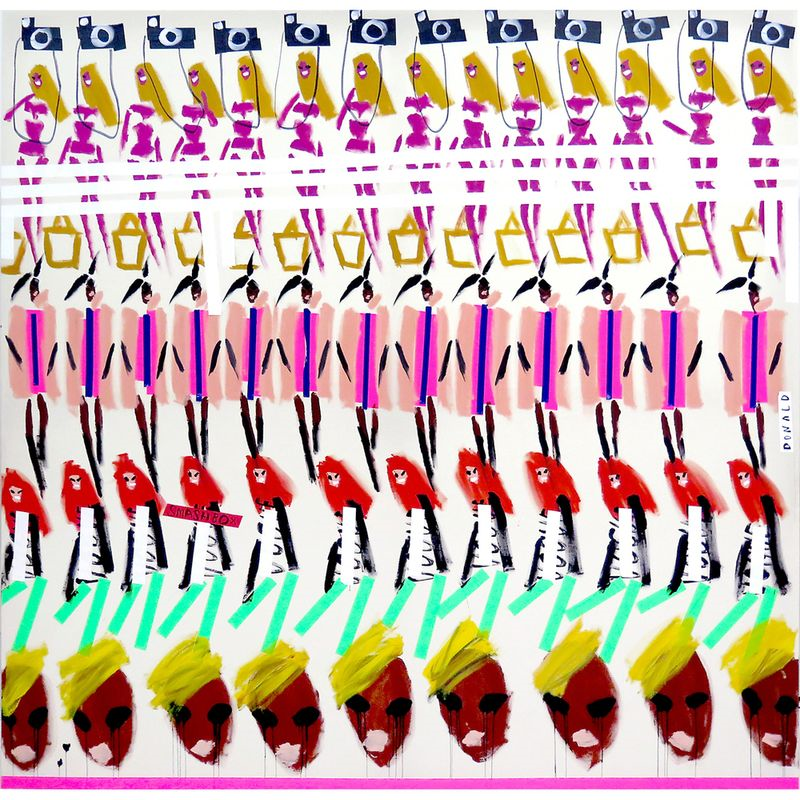 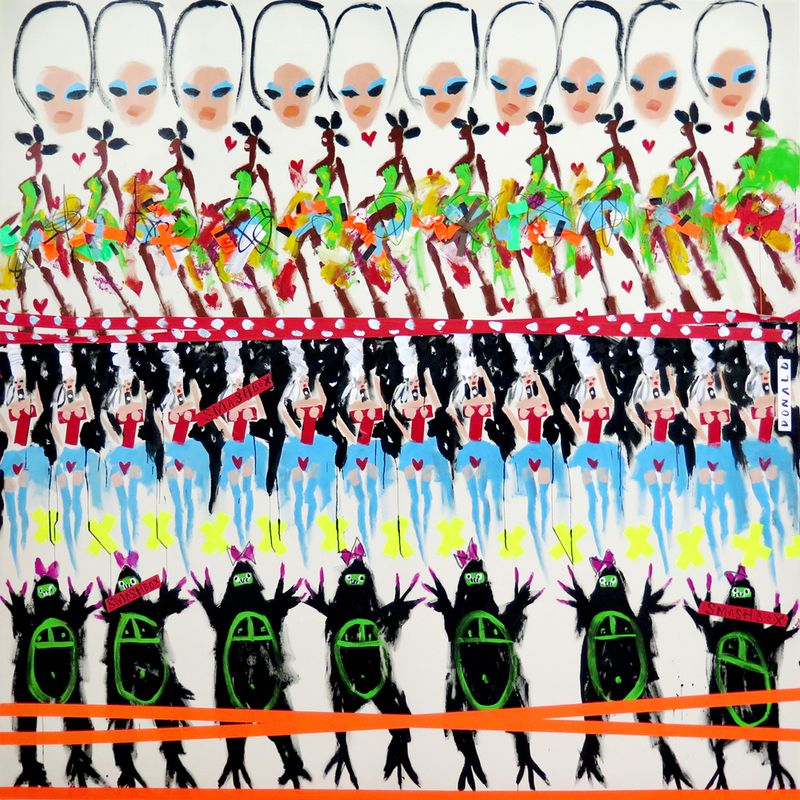 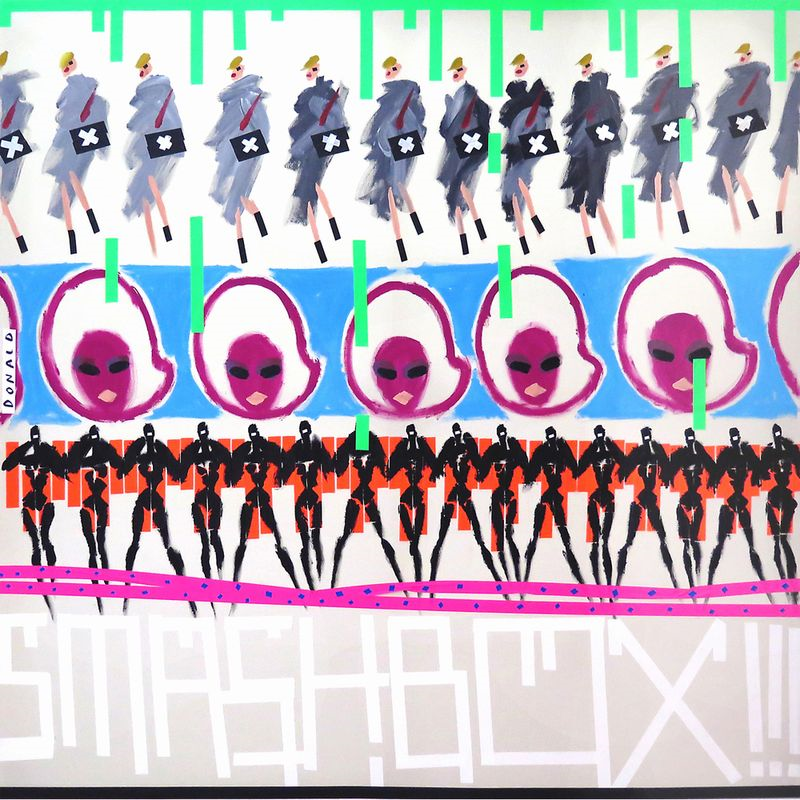 Here they are on site: 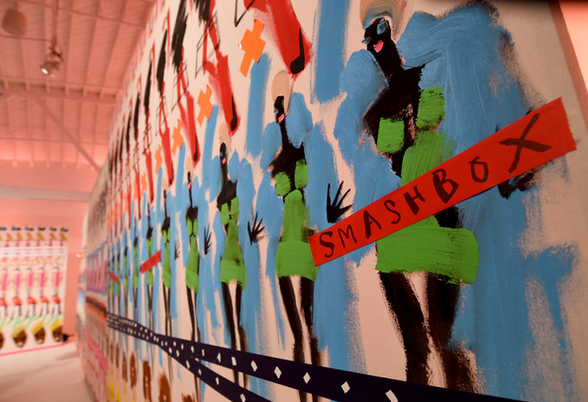 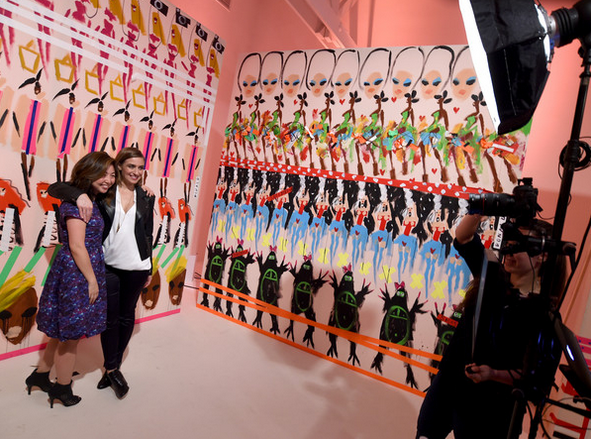 Robertson's remarkable career is basically my fantasy.  Early on he was one of the founders of MAC cosmetics, then became creative director of Condé Nast America and helped launched Marie Claire. After that, he went to work for Estée Lauder, where he currently serves as creative director for all brands.  Thus, he is extraordinarily well-connected in the fashion and beauty industries.  (Hey, Donald, do you think you could hook me up with an Estée exec about getting a real space for the Makeup Museum?  Or talk to someone at a publication about getting the Museum featured?)  I loved the pieces he did for Vogue Korea: 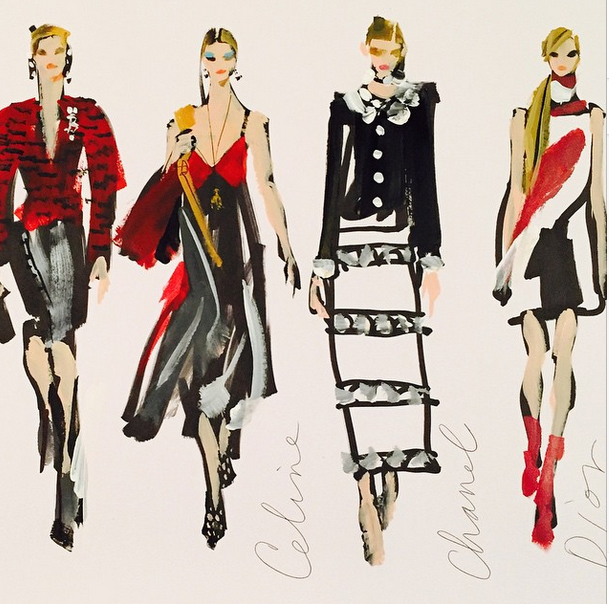 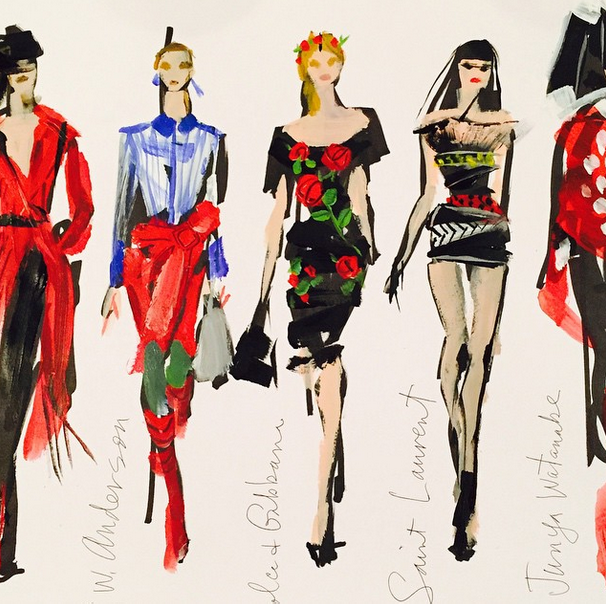 And this portrait of Estée Lauder for Bergdorf Goodman: 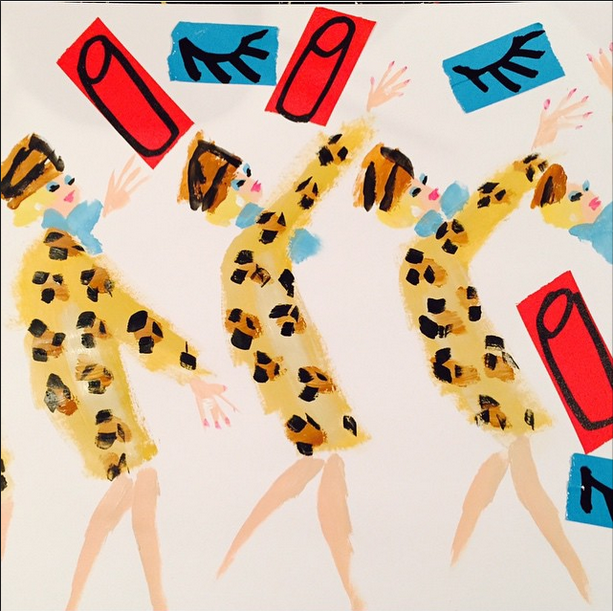 And look! You can buy this bag starting Thursday.  I must admit I am tempted despite the Smashbox goodies I purchased. 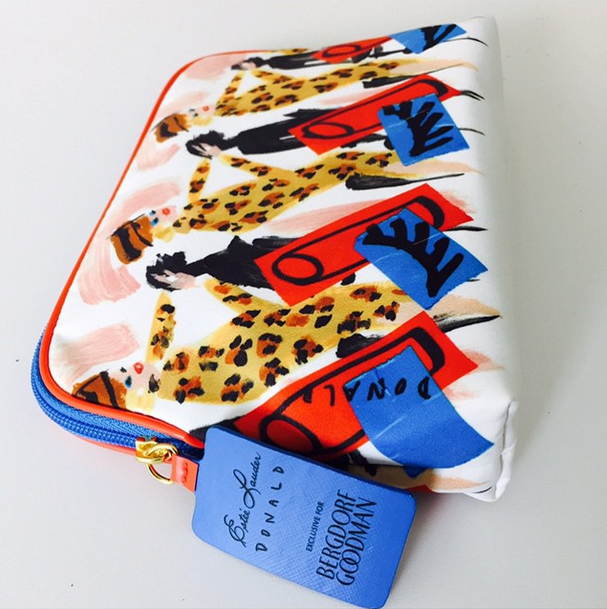 Thanks to the seemingly never-ending stream of new illustrations that he posts on Instagram, Robertson quickly became known as the "Suburban Andy Warhol", although his massive legion of admirers took him completely by surprise.  “People say I am reminiscent of Andy Warhol because he started as an illustrator and then transitioned into art. I am kind of in that position now. Andy’s output was maybe monthly. I like putting out three or four things a day,” he says.  “This is a 100 percent unexpected thing... I’m just some schmoe-y guy who lives in suburbia.”  He's humble, but the amount of energy he must have to produce so much on a daily basis is awe-inspiring.  I get tired just reading about his artistic process, which he describes thusly:  "I get up every morning at around four and do my art exercises. I'll fly through Instagram and sort of get a feel for what's happening in the world! Then I'll just pick a medium like paint or sharpies or garbage bags or walnuts or whatever catches my eye! Then you can't stop me. It's like flood gates opening...I can't imagine doing one thing and then just sitting back. We are constantly being bombarded my imagery and ideas. It's like my performance art. I'm always reacting to stimulus coming at me all day."  Take, for example, this quick sketch of Kim Kardashian and Beyoncé (plus their respective beaus) at the Met Gala. 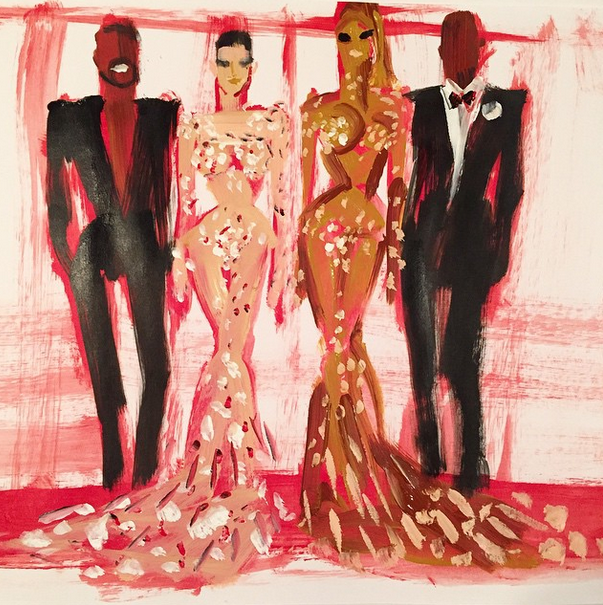 I have no idea how he does all these timely illustrations in addition to working a regular full-time job. Oh, he also has 5 kids.  Besides possessing a unique artistic talent and incredible energy, he's funny to boot.  I found some great quotes in this interview with W magazine:

“This is my revenge on photography which has sucked up all the attention since the 1930s, when illustrators had their own magazines.”

"In life drawing class, they would put a normal fat model up there, and the teacher would come over and my drawing would be tall and skinny, and they would say ‘You fail.’ And I would be like: ‘You know what, I like my drawing better.’”

“I get away with nipple murder on my feed. And everyone keeps saying ‘those are nipples’ and I’m like ‘Yes they are.’ So, now I am just pushing it. It’s like nipple carte blanche.”

Robertson cites Wes Anderson and Damien Hirst as his chief influences, "because the thing about both of them is everything they do feels really hands-on. You can see their hands in their work.” 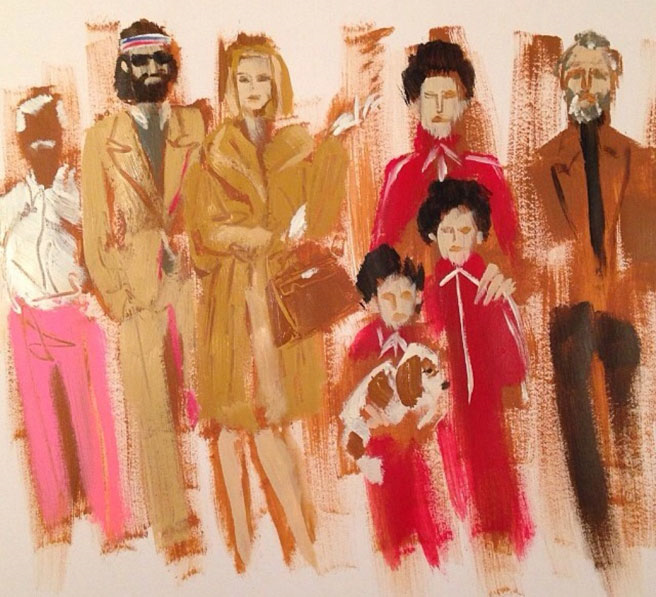 He also admires the work of John Currin:  "If I had one superpower it would be to be able to paint flesh as well as the artist John Currin - he is my superhero! 'Paintbrush Man'."

As for the subjects of his sketches, he says, "I call it 'tongue in chic.' I’m not just drawing stuff; I’m painting ideas or poking at trends that the world is vibin’ on."  He also notes that Instagram and his children inspire him.  "Instagram inspires my design. I react to it. It is my art exercise. That and my children. I watch what they are interested in and they have opened my eyes to whole new worlds," he says. 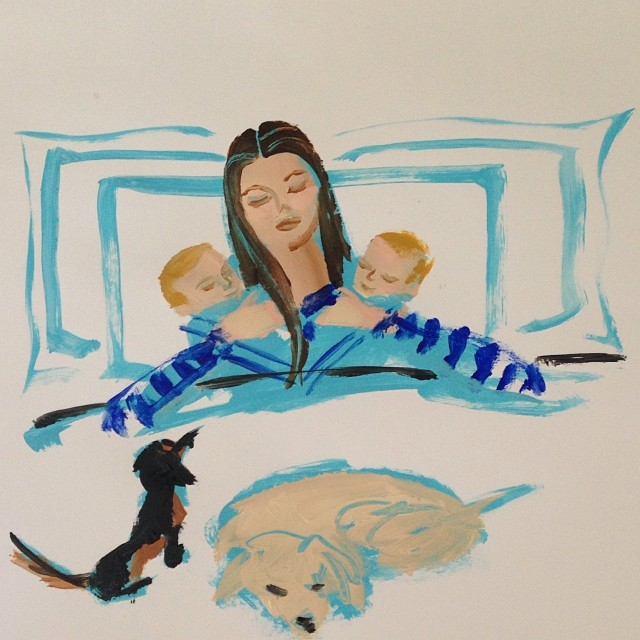 I really can't see anything not to like about Robertson's work.  It's slightly abstract and painterly, yet definitely embraces the culture of celebrity and high fashion.  He's not afraid of color, which I personally love, and I'm especially fond of how he arranges many of his subjects in orderly rows.  Rather than being dull, the repetition of these figures has an army-like effect - when I look at his drawings I'm imagining Amazonian fashion warriors marching into battle.

What do you think of Robertson's work and the Smashbox collection?