A few weeks ago I was browsing a farmacia in Rome, trying to determine if there were any good drugstore products I should bring back to the States, when I saw this display.  I knew I had seen that image of a red-lipped woman wearing a blindfold before, but where? 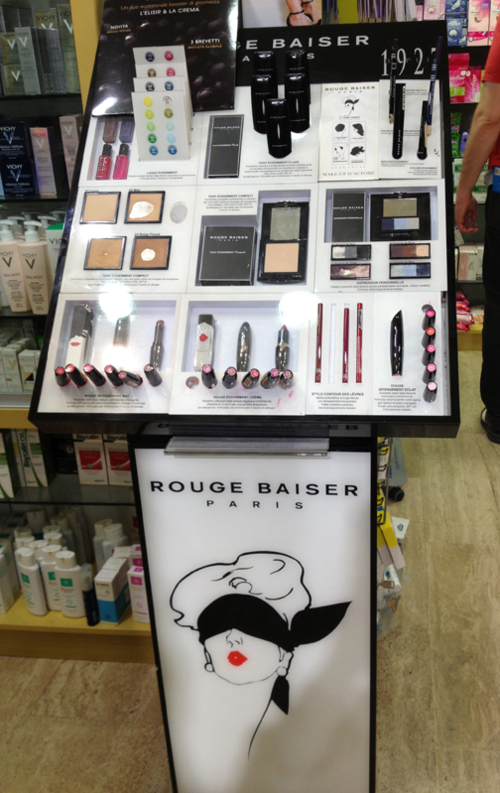 Aha!  It was at good old hprints.com, where I end up browsing vintage makeup ads for hours.  I had assumed it was a long-gone brand since it's not sold in the U.S., but apparently Rouge Baiser is alive and well in other countries.

Rouge Baiser was launched in 1927 in Paris by a French chemist named Paul Baudecroux. Considered to be the first "kiss-proof" lipstick, the original formula was actually so indelible that it was banned from the marketplace, having been declared too difficult to remove.  (I don't know who made that decision, but I'm guessing that if they were alive today, they would certainly ban glitter nail polish - talk about hard to remove.)  I'm no cosmetic chemist, but here's some more technical information on the original formula if you're interested. According to this article, Baudecroux used "eosin dissolved in propylene glycol to make Rouge Baiser...a strong stain was produced with this lipstick as the eosin was in complete solution when it came in contact with the lips. Some said it was too strong! However, as other chemists also discovered, using propylene glycol was not without its problems. As well as having an unpalatable taste, propylene glycol is affected by changes in the atmosphere – losing water when the air was dry and picking it up when the air had a high humidity – with potential effects on the integrity of the lipstick."

While the original formula was modified, Rouge Baiser still marketed its product as being the no-smear, long-lasting answer to women's lipstick prayers.  Several prominent illustrators worked on the ads, including André Edouard Marty: 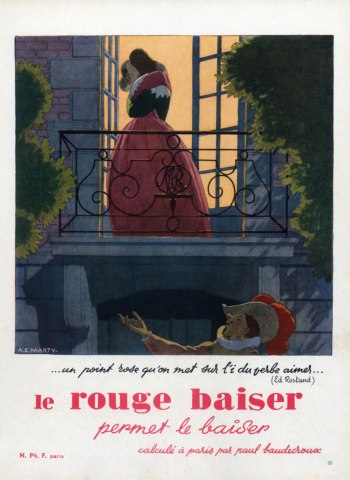 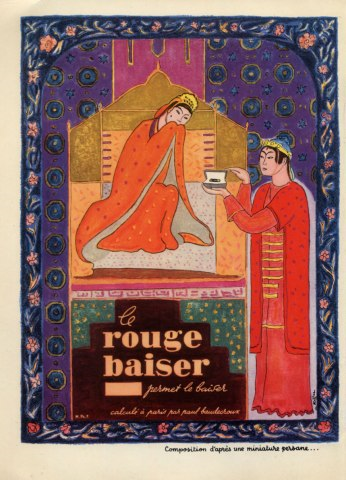 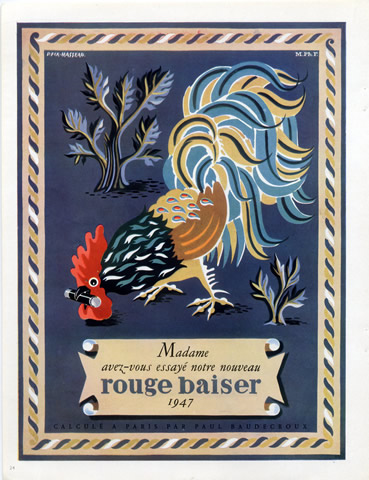 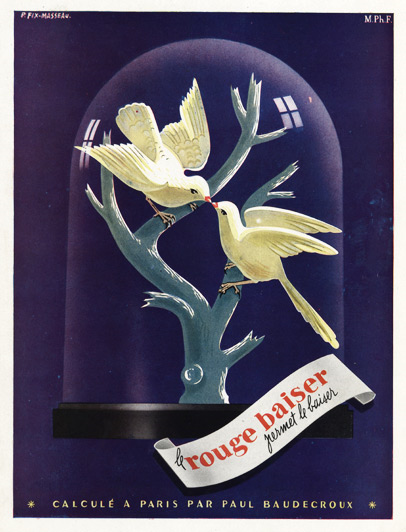 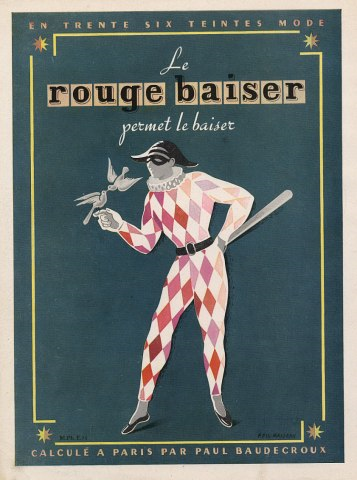 But in 1949 famed fashion illustrator René Gruau created the iconic image of the blindfolded woman with red lips, which, as my Rome pharmacy photo attests, is still used today.  You might remember Gruau from his work with Dior.  I think there is a story here on how Gruau came up with the idea for this design, but I can't read French and once again, Google Translate makes no sense. He came up with several equally chic variations for the brand as well. 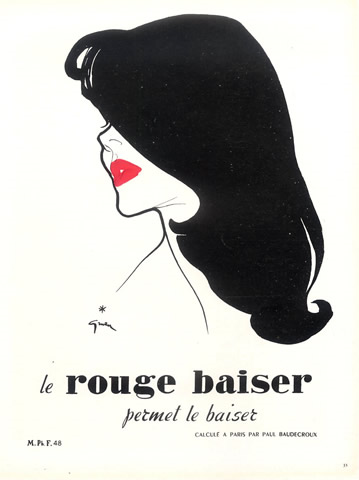 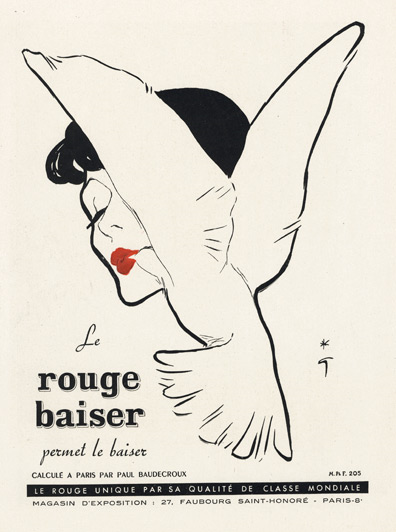 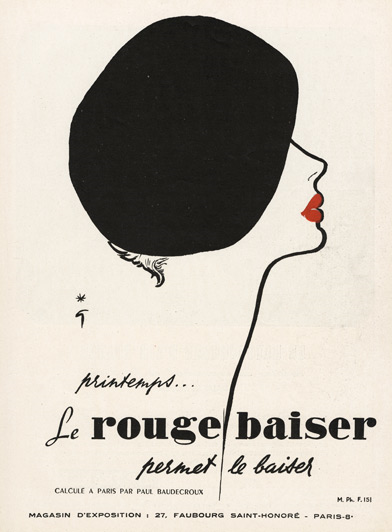 Pierre-Laurent Brenot, known as the "father of the French pin-up": Carl Erickson (a.k.a. Eric), who was more well-known for his work with Vogue and Coty: 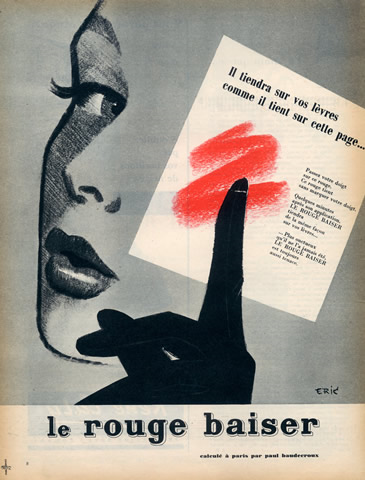 And Pierre Couronne, who also did work for Dior's lingerie line: 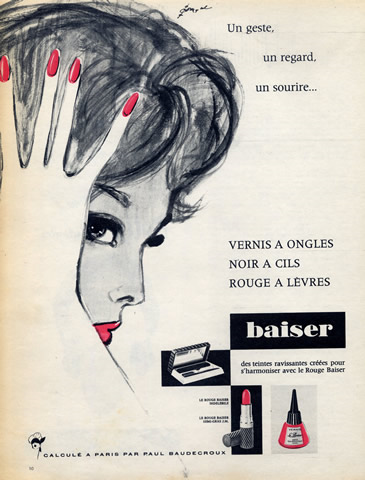 (Now here's an odd coincidence: with the exception of Carl Erickson, all of the illustrators I've mentioned here lived quite long, well into their 80s and 90s.  Perhaps working on ads for a long-lasting lipstick translated into lasting long themselves.)

Fast-forward to today: From I can piece together, Rouge Baiser is sold only in France and Italy.  It was acquired in 1994 by the Deborah Group, an Italian company that dates back to 1903.  To celebrate the 80th anniversary of the brand, in 2007 a series of lipsticks featuring Gruau's illustrations was released in France.  Called "L'Authentique", the line consisted of reissued shades in a matte, long-lasting texture meant to mimic the original formula. Unsurprisingly, "L'Authentique" was the preferred lipstick of the ever stylish Audrey Hepburn in the '50s. 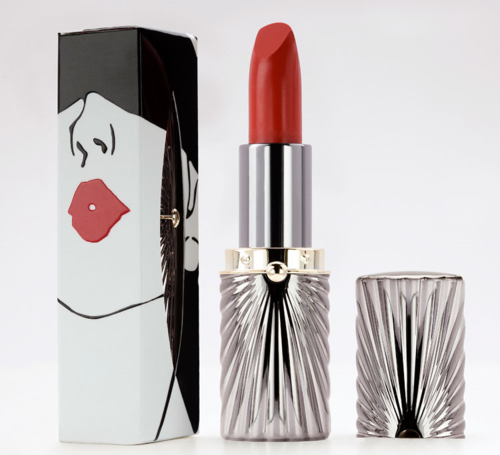 Rouge Baiser was then launched in Italy in 2012 with the same outer packaging for a few of its lipsticks. And now I am very sad since I realized I should have bought some.  In looking at the photo I took more closely, you can see that the packaging with Gruau's illustrations was available (I guess it's permanent and not limited-edition).  I was just so distracted by the image on the display itself I didn't even look at the products!  For shame.

What do you think?  For those of you living in the U.S., do you think we should start a campaign to bring it here or is it not worthy?  I personally want it for the packaging alone!