I'm still here...just been pretty sad and work's been kicking my ass.  The snow we had yesterday on the first day of spring was particularly cruel and depressing.  So today I'm hoping to perk myself up a bit by posting about more spring goodies.

I thought this past holiday season was the peak of angel-themed items, but Guerlain's Angelic Radiance Météorites proved me wrong.  The design is a departure from previous Météorites as they've got a delicate paper lid, and instead of a pattern there's a scene of two cherubs frolicking among some foliage.  Usually I like a sturdier lid since paper is more prone to damage long-term, but in this case I think it works well combined with the illustration and the soft pink tones.  It also makes me a little hungry - I think a larger version of the box would be perfect for macaron packaging.  :) 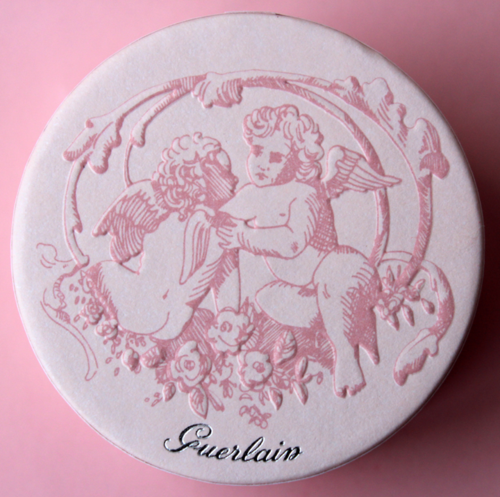 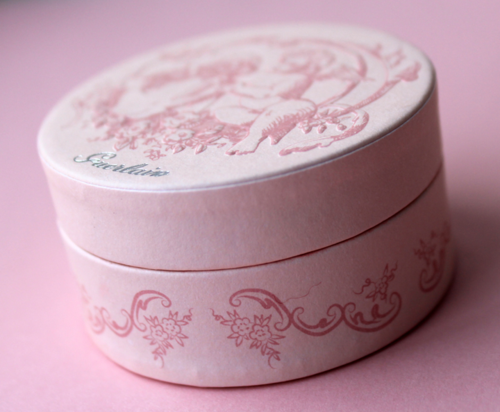 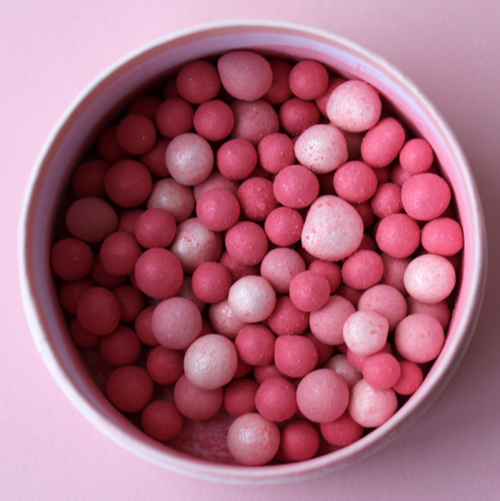 I've written about cherubs before and gave some examples of them in Renaissance art, but the ornate decorations on the Guerlain box look more like they were inspired by 17th century art rather than the Renaissance.  I poked around online to see if I could find anything similar and came across the work of engraver Jean Lepautre (1618-1682), whose work, I think, is reminiscent of the Guerlain container.   This site has a concise description of Lepautre:  "[He] has been described as the most important ornament engraver of the 17th century. His prodigious output extended to more than 2000 prints, mostly from his own original designs.  He was not only the originator of the grandiose Louis XIV style but was also responsible for disseminating and popularizing its full lavish repertoire throughout Europe. Le Pautre's often over-elaborate and flamboyant designs frequently included arabesques, grotesques and cartouches, together with elements from classical mythology.  His diverse range of subject matter, influenced by his carpentry/joinery architectural background, included: friezes, wallpaper, alcoves, fireplaces, furniture, murals, ceiling mouldings, fountains and grottoes."

In 1751 Charles-Antoine Jombert produced a 3-volume series of Lepautre's work, and astonishingly enough, the University of Heidelberg digitized the entire thing and made it available to the public. I went through each image and picked out what I thought most resembled the Météorites case. 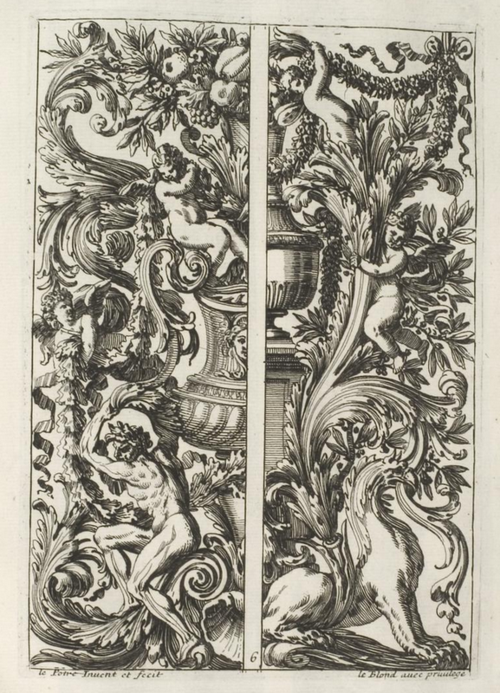 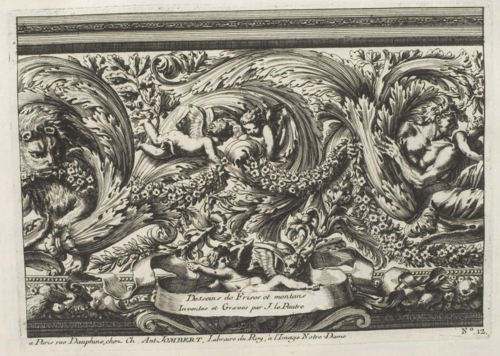 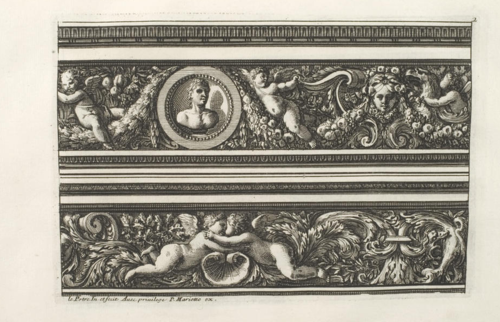 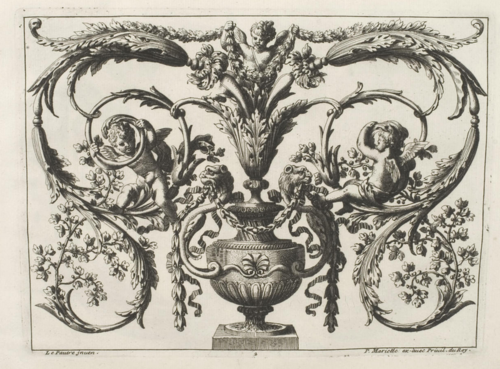 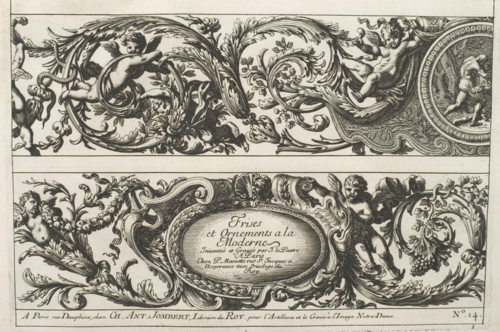 Admittedly I chose this one not just because of the angels but because there seems to be mermaid angels in the bottom panel! 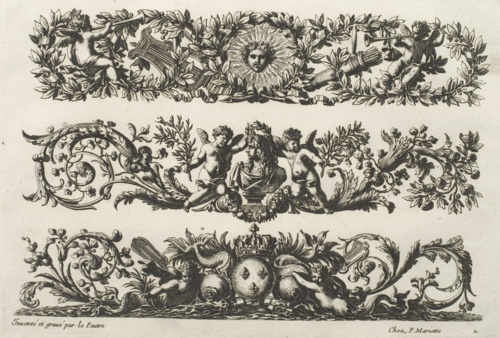 I tried to get some more close-up images so you could see the similarities between these engravings and the Guerlain box - the etch marks, the lines of the foliage, even the cherubs' hair are nearly the same. 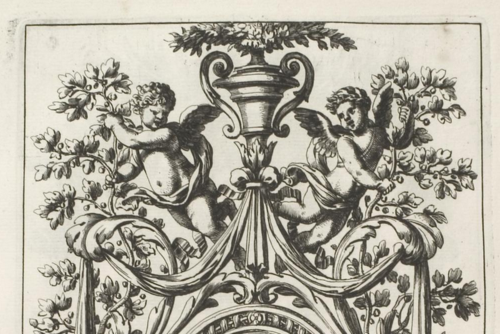 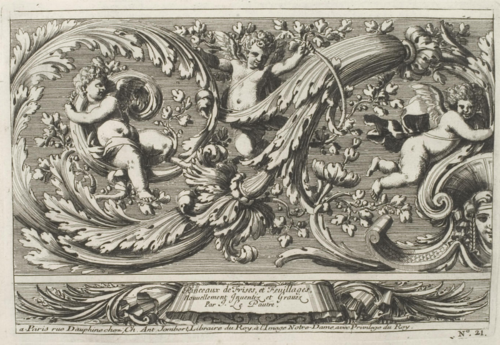 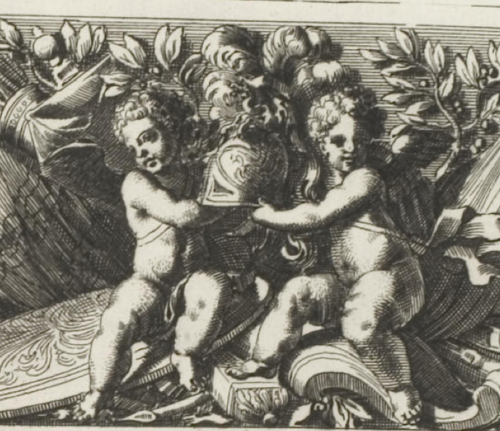 I wonder whether this is just a coincidence or if the design team at Guerlain had been looking at Lepautre.  I'm also curious as to why they decided to do a scene featuring angels as I didn't think cherubs were a Guerlain motif.  As it turns out, angels appeared on a Guerlain powder container from 1918.  The Poudre aux Ballons were scented with various Guerlain fragrances.  (For the record, this is officially on my wishlist - I hope I can track one down!  I also just remembered that I've come across the Poudre aux Ballons before.) 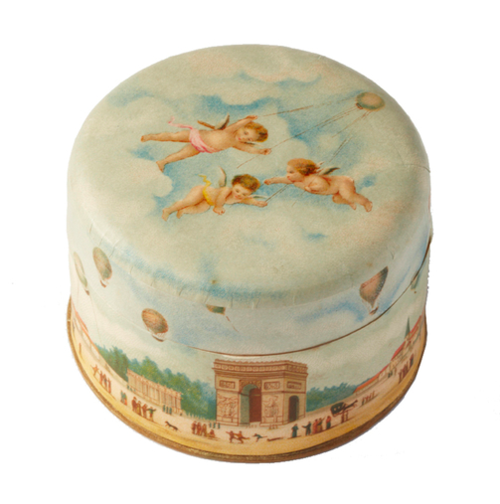 You may recall that balloons were used in last year's spring promo image (more about that in a future post.)

Anyway, while I can't say definitively that Guerlain's latest release is in any way inspired by 17th century ornament engravings, it at least caused me to discover an artist that I wouldn't have known about otherwise.  And I really like the Météorites packaging - so feminine and springy and French.  It may not be as sleek and sophisticated, as, say, the Impériale Météorites (holiday 2009) or the 2012 Pucci collection, but I think it's a refreshing change from what they normally do.