This was quite a delightful Chinese New Year surprise from Shu.  In honor of the holiday, the company chose to feature the work of the Qiang people of the Sichuan province of China.  Consisting of a population numbering around 310,000, this group has been producing complex, brightly colored embroidered patterns for over 1,000 years.  Efforts to uphold the Qiang embroidery tradition were strengthened in the aftermath of a massive earthquake that devastated the area in May 2008.  Today, Shu continues this effort by collaborating with Yang Huazhen, a fourth-generation Qiang embroiderer and official country representative of Qiang embroidery, to design two patterns related to Shu's Anti/Oxi and Ultime8 cleansing oils.  The company is also working with Chinese nonprofit Xihan Action to start a fund that will allow Qiang women to take an advanced, 6 months-long embroidery class to ensure that Qiang cultural traditions will be promoted and sustained for future generations.

So let's get to it, shall we?  I loved the way the pattern extends all the way around on both the boxes and bottles. 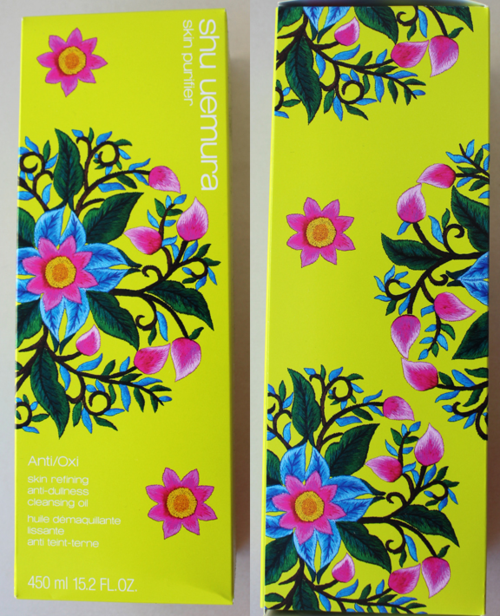 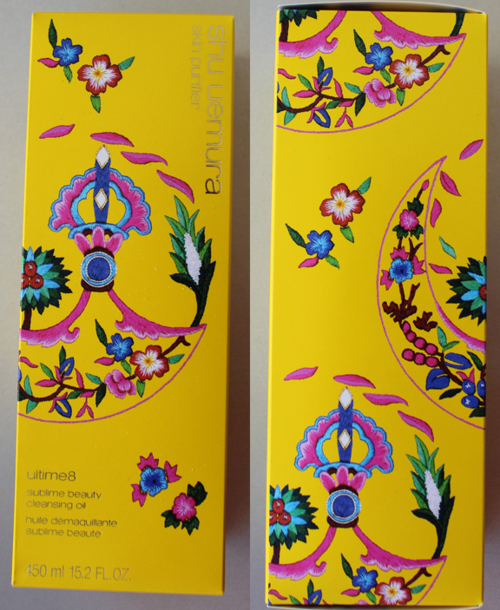 Shu had a code to get a free embroidered bag with purchase.  Obviously it's mass-produced, but it would have been to cool for them to offer an embroidered bag for sale that was actually made by the Qiang, in addition to the oils.  Then the proceeds could go to the nonprofit they're working with.

The design on the Anti/Oxi oil "represents eternal youth" since it contains green tea extract.  At least that's what I gathered from Shu's unintelligible product description: "The traditional embroidery patterns are reinterpreted and meet the symbol of youth green tea."  Mmmkay. 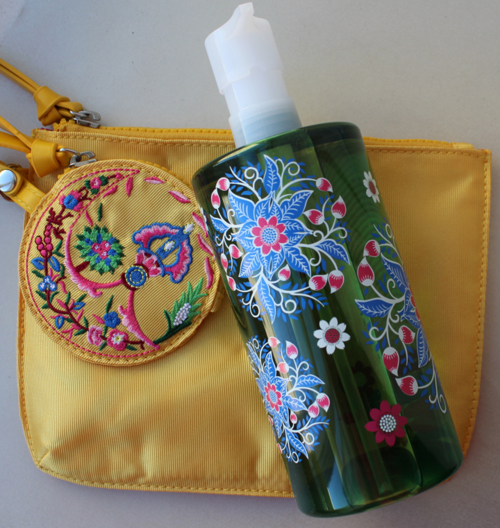 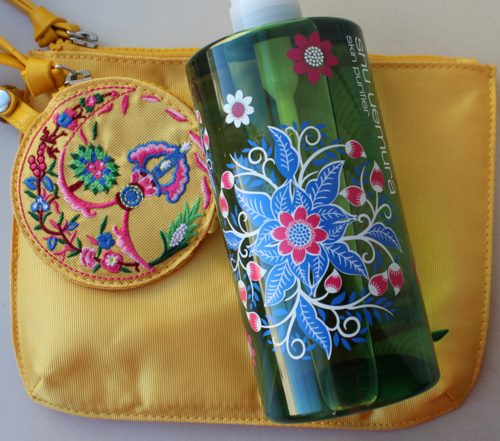 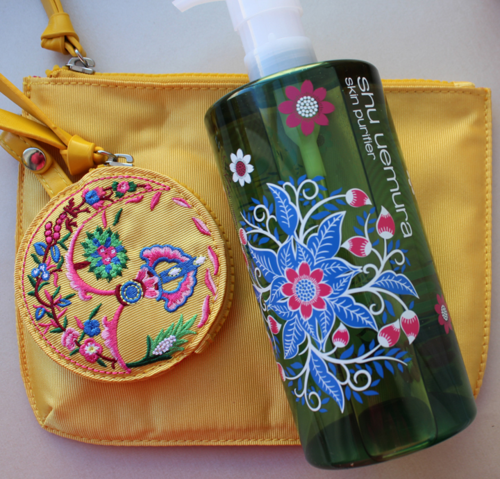 As for the Ultime8 oil, the meaning behind the pattern was equally befuddling.  "A combination of ultimate motives into one embroidery. Vajra - a mystical symbol for power associated with ultime8 botanicals - promises vitality for life."  Well, that at least allowed me to look up the word "Vajra", a Buddhist symbol. 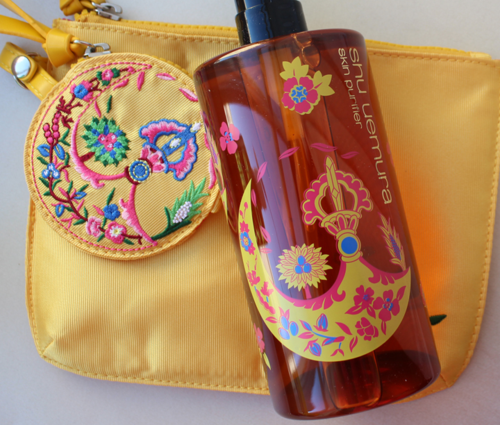 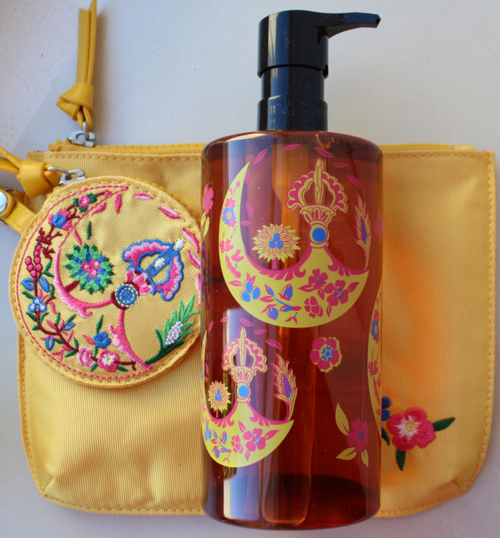 I did a little investigating to come up with examples of Qiang embroidery to see if the ones from the cleansing oils resembled them at all.  The Smithsonian had images of some wonderful textiles created by Qiang women at the 2014 Folklife Festival.  They show that the patterns on the oils really are quite authentic both in color and design. 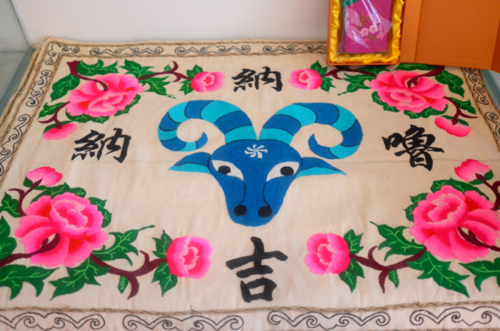 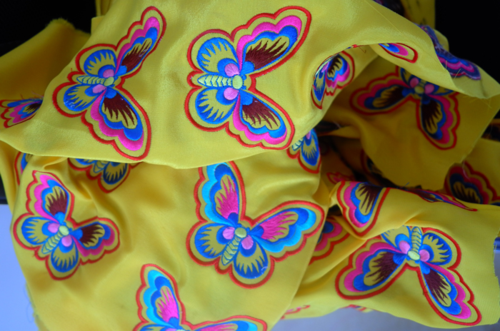 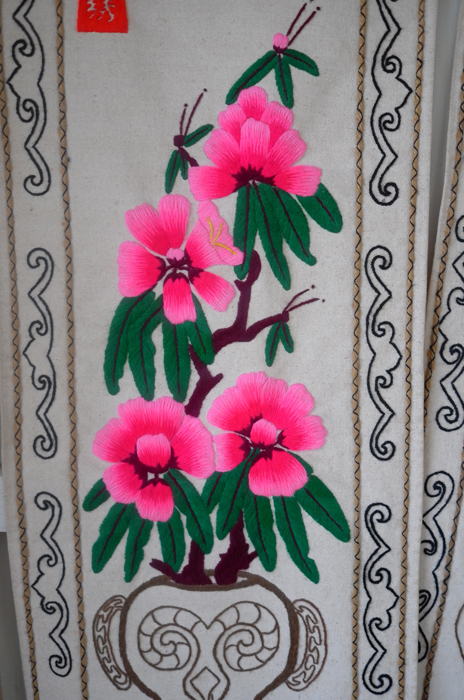 Here is the embroidery in dress form.  I love how bright it is.  This picture is from a showcase of Qiang embroidery at the Jinsha Relics Museum in July 2008.  The event was the official start of the effort to promote and protect the Qiang embroidery tradition following the earthquake that took place a few months prior. 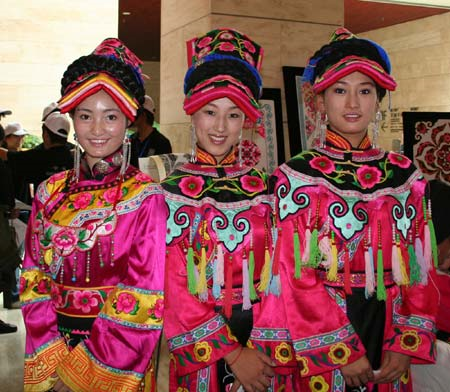 Once again, Shu has brought attention to art/culture I never would have known about otherwise.  And it's gorgeous!  The colors are the perfect antidote to the winter blues.  I just wish the description of the patterns and the meaning behind them were made a little more clear, and I'd like to hear more about Shu's involvement in helping the Qiang people - any kind of charitable action on the part of a cosmetics company should be emphasized.