As you may know I occasionally receive emails from folks needing help identifying vintage makeup items.  Today's post highlights several lovely vintage compacts, pictures of which were sent to me by a woman whose grandmother had passed away and left the compacts to her.   As she would like to hold on to the compacts as keepsakes, she was curious to know more about them. 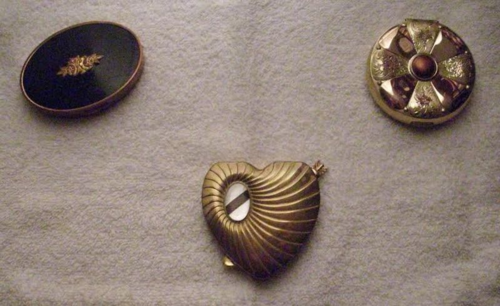 Fortunately this inquirer also sent pictures of the compacts open and their reverse side, so for two of the three I was able to identify the company that made them based on the puff that was included.  On the left is a compact by Elmo (no, not the Sesame Street character), the middle one I wasn't sure about, and the compact on the right is by Evans. At the time I received the inquiry, there was virtually no information available on Elmo Sales Corp., a Philadelphia-based company founded in the early 1900s, and I really had no idea what decade the compact might be from.  So you can imagine I was overjoyed to see that a comprehensive history of the company surfaced at the ever-thorough Collecting Vintage Compacts blog back in May of 2014.  The blog author included a picture of an identical compact in ivory enamel that was dated to 1941, so I'm guessing the black enameled compact is from around the same time. 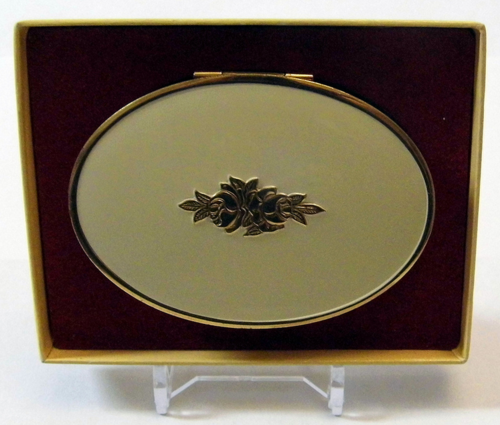 The middle one was a bit trickier.  By sheer luck I stumbled across a similar-looking compact for sale at One King's Lane by a company called Cara Mia.  The site listed it as being from the '30s. 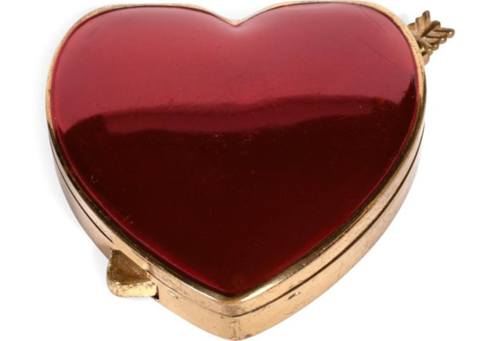 Based on the interior of the compact, with its two compartments and diamond pattern, I have reason to believe the one in the pictures I was sent is also a Cara Mia.  However, I think it might be a little bit later, circa 1940s. 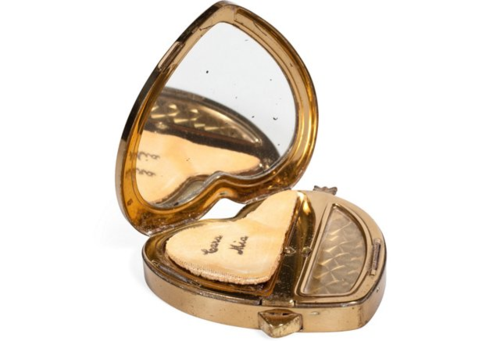 As for the remaining compact, there's a wealth of information on Evans thanks again to Collecting Vintage Compacts.  However, I couldn't find any that looked identical to the one in the picture I was sent, so I had a difficult time dating it.  I found one that was sort of similar in that it had a combination of rosy copper and gold metal tones, and that one, according to the seller, is from the 1940s. 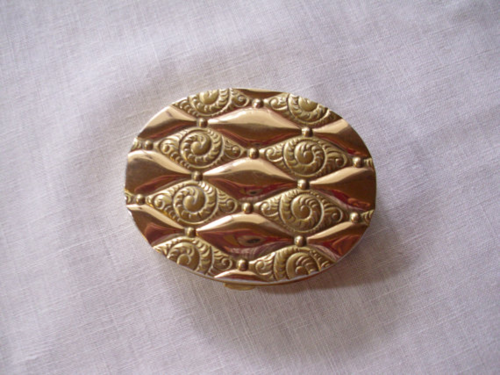 The person who emailed me with her inquiry, bless her, was quite grateful to get the meager information I had provided.  I wish I could have given exact dates for all and been able to say with 100% certainty that the heart-shaped compact was by Cara Mia, but even after over 6 years of running the Makeup Museum I'm still getting my feet wet in terms of vintage makeup.  :)

What do you think of these?  And do you agree with my assessments?