How cute are these two?

I must say that upon first glance this collection didn't do much for me, or at least the packaging didn't.  Then I started reading up on the fashion super duo behind MAC's latest collaboration and was so impressed with their work I had no choice but to purchase several pieces.  Husband and wife team Ruben and Isabel Toledo are a force to be reckoned with and frankly I'm ashamed that I didn't know who they were until now.

Both Cuban-born, Isabel is a clothing designer while Ruben works as a fashion illustrator, producing delightful drawings not only for his wife's work but for a plethora of other projects.  While I admire their work (I'll get to that in a sec) it was their long-term romance and partnership that made me connect to them, which you can read about here and here.  As for the MAC collection, both were very excited for the opportunity, explaining that they had worked with the brand on other projects for several decades.  "We were thrilled when M∙A∙C approached us to work on a collection together; it was a dream-come-true. We share a long history of 30 years with M∙A∙C, collaborating on many of the same charity projects. The opportunity to create objects of art and desire came together like a family affair, especially since M∙A∙C works brilliantly with artists and they have a global following of fans. James Gager [M·A·C creative director] and Jennifer Balbier [M·A·C VP of product development] gave us complete creative freedom and helped bring our vision to life."

I chose what I thought were the most iconic pieces in the collection.  The illustrations on the packaging, of course, are Ruben's portraits of Isabel with her signature red lips.  He says, "When creating the different illustrations for the collection I was inspired by the fluidity of the lines and the spur-of-the-moment feel of it. If I'm doing a portrait I start with the eyes. If the eyes don't speak to me, then I just start over again. I need to capture that one thing in the eyes where the mystery and the soul are. I love painting, the drawing of the lines and the graphics of it all. It is my passion on paper."  Isabel is always his primary muse, however:  “It’s the face I draw again and again and always. It’s just in the flow of my hand, Isabel’s face.”  Awwww!! 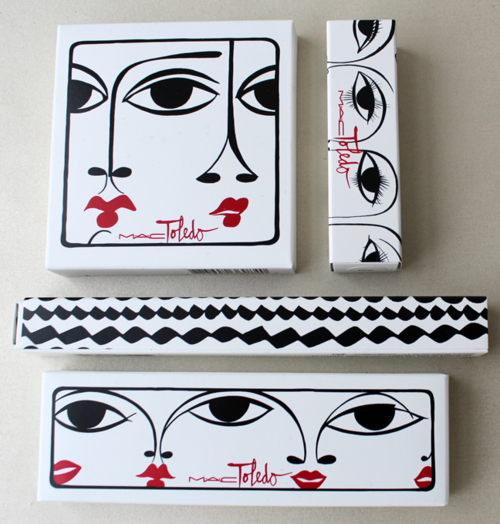 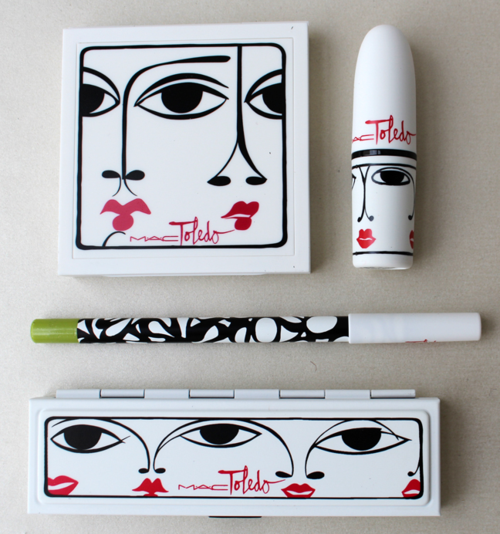 As for the shades themselves, they might seem rather discordant, with no connection to each other at all.  However, the variances express Isabel's early experimentation with color and also serve as a nod to her party nights at Studio 54.  She says, "I love poetic colors, unusual combos, and nameless hues, all unexpectedly mixed in with the everyday. For me, it's much more about the tones than the actual colors. For instance, I love nudes with neon or a smoky mysterious eye with a bright and happy futuristic red lip. I love to see denim worn with just a t-shirt accompanied by deep operatic lips. Studio 54, disco, punk, and new wave allowed for a lot of freedom of expression in the way I dressed, danced, and presented myself. It was a great way for me to find my look as a young lady of 14 and 15! I went from wearing jeans and a tube top with smoky film noir makeup one night, to futuristic yellow brows paired with a nude mouth the next. Makeup moves faster than fashion, that's what makes it so fresh."  Her take on unrestrained use of color definitely speaks to me, and I also was intrigued that she likens makeup to painting:  "I see Ruben's watercolor paintings, and I wanted the freedom to do that on my face. I wanted to all of a sudden do my eyelashes in yellow or green with a matching eyeliner, something that's not natural. It's like having the ability to paint. And I mean, if you think about it, women paint every day standing in front of the mirror."  Our philosophies on makeup are perfectly aligned! 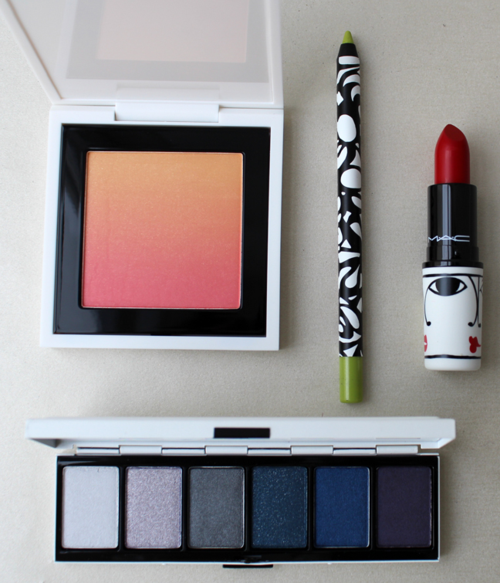 I wanted to see what some of Ruben's other illustrations involve.  Once again, I'm embarrassed I didn't recognize his name or previous work as he's landed some pretty huge projects, including Nordstrom catalogs: 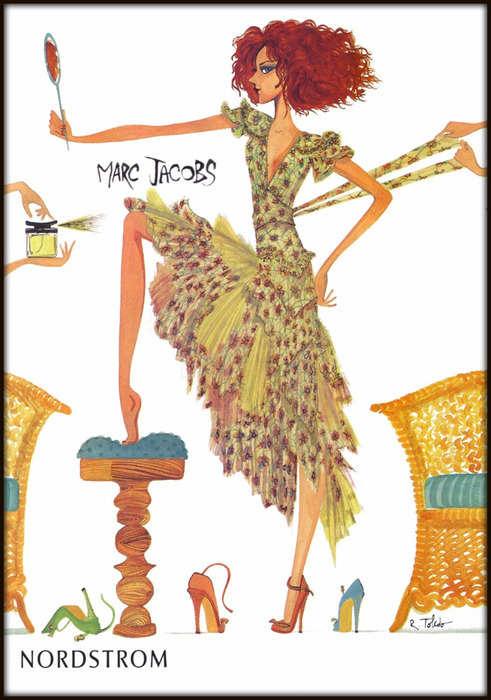 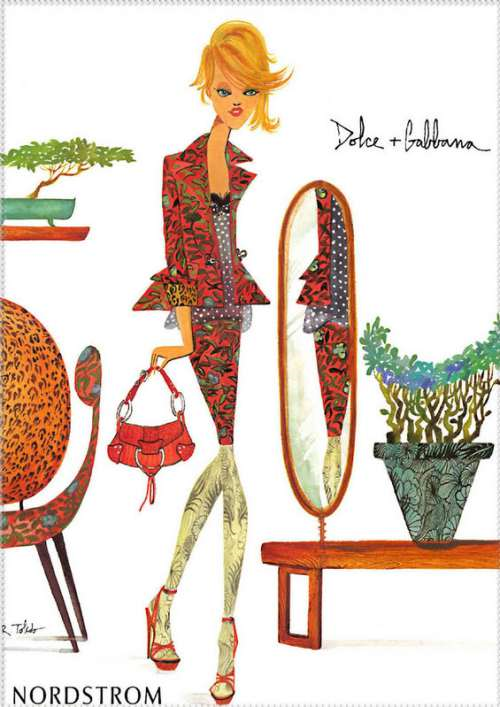 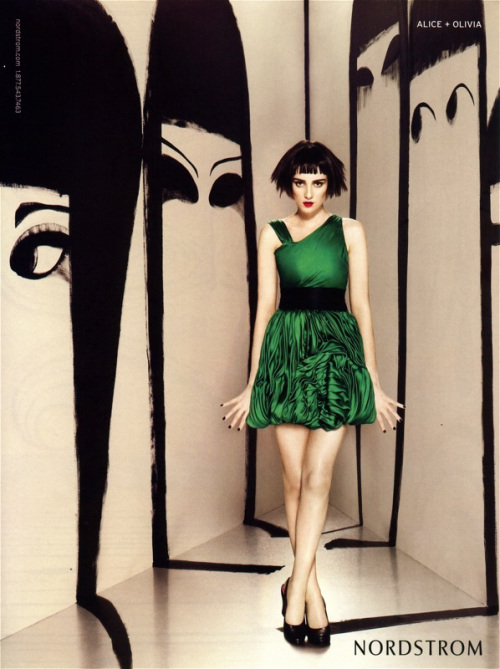 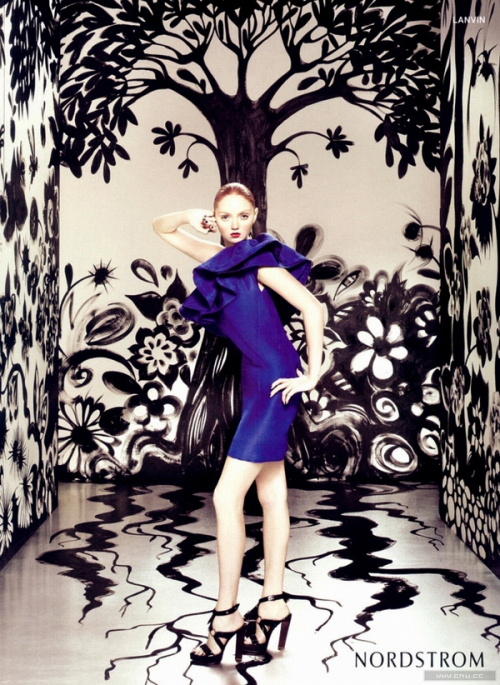 And of course Vogue: 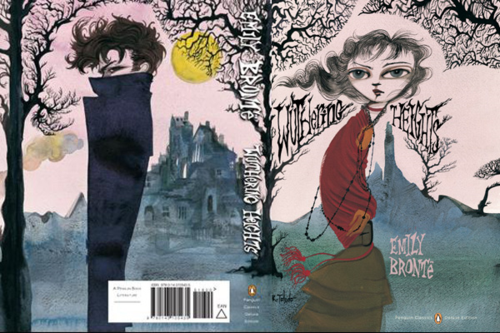 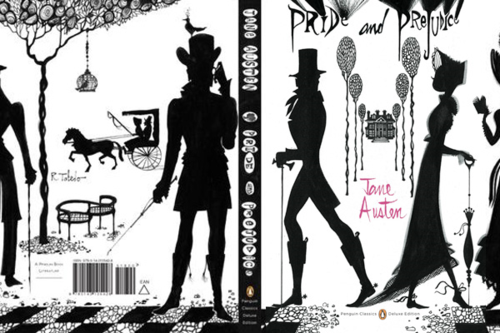 Ruben also did illustrations for many fashion books, including one for Nina Garcia.

I included this picture from the book since the lipstick I purchased from the collection is named Opera, and Isabel references "deep operatic lips" as one of her inspirations. 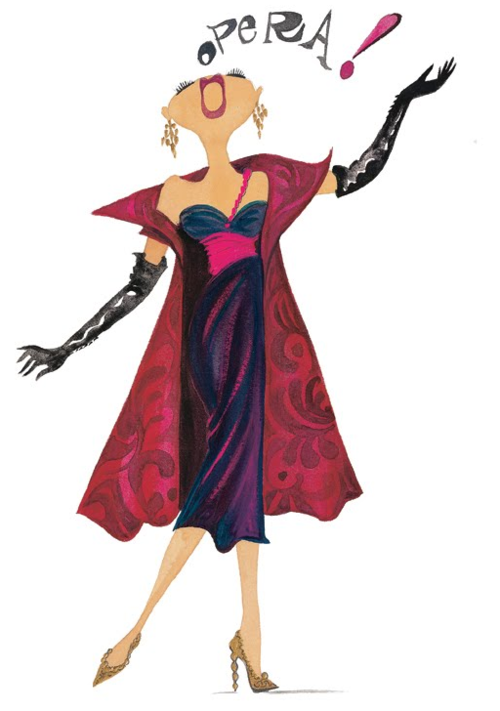 I also wanted to see if he's drawn Isabel for other projects, and indeed he has.  This illustration for the 2012 holiday issue of Bon Appetit looks very similar to the ones on the packaging for the MAC collection. 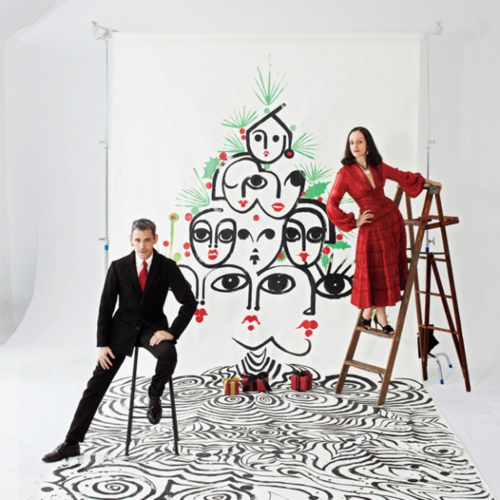 I also wanted to see whether there was any correlation between Isabel's fashions and the MAC collection.  The Fashion Institute of Technology (FIT) offered a 2009 exhibition devoted to Isabel's work, and from there I got a better sense of her aesthetic.  Much like her taste in makeup, it's all over the place - lots of bold color, unusual but not unwearable silhouettes, and there's definitely a penchant for experimentation. 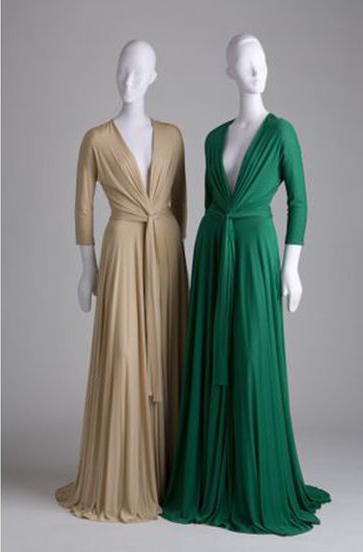 More notably, how could I forget Isabel's pale chartreuse number that she designed for Michelle Obama to wear to her husband's inauguration?  It's fashion-forward but still appropriate for a First Lady. Overall I was glad I read a little more about the collection and eventually decided to bring some pieces home.  It captures the essence of this husband and wife team in that they each contribute something different but the end result is even greater than the sum of its parts.  As Ruben remarked, "We're so meshed, it's impossible to separate what we do."

I also feel like Isabel and Ruben are very creative and interesting people but have none of the pretentiousness that plagues most of the fashion world.  From interviews with them as well as the MAC promo, they seem like fun-loving, down-to-earth people who don't really care about what's cool or popular - they just want to make their art.  I could totally see me and the husband having dinner with them...he and Ruben could discuss illustration, while Isabel and I would play in my makeup stash and talk about shoes.  :)

What do you think of the collection and of the Toledos' work?