Makeup as Muse follow up: May Sum's work revisited

Last week I noticed a huge spike in blog traffic - nearly 3,000 page views (or, sadly, roughly 14 times the usual amount of daily views).  Clearly the counter must be broken, I thought, there's probably some kind of glitch that's inflating the number.  As it turns out, it was actually correct as one of my posts was linked in one of those silly Buzzfeed lists so that's what was driving all the traffic.  Naturally I perused the list to see where the Makeup Museum was mentioned and saw that one of the items included was new work by May Sum.  You may remember this lipstick sculptor as being the first Makeup as Muse post I did back in 2013.  The Buzzfeed list highlighted some more recent and quite spectacular work of hers that I somehow missed, so I thought I'd talk about her latest makeup-as-art endeavor:  a collaboration with Make Up For Ever.

In the fall of 2014 Make Up For Ever celebrated their 30th anniversary by launching a new range of eye shadows that were showcased at an event at Club Lusitano in Hong Kong.  Five new eye shadow finishes were introduced in the new line and captured in a photoshoot, with each model wearing one of the finishes.  (I have to say I'm fuzzy on the details for this, as the Google translation was awful and I couldn't find any articles in English.)  In addition, May Sum created an "Artist Shadow Wonderland", an exhibition consisting of a more elaborate, forest/floral-themed take on her famous lipstick sculptures.  She also was behind the intricate flower garden sculptures that seem to sprout from the eye shadows themselves. 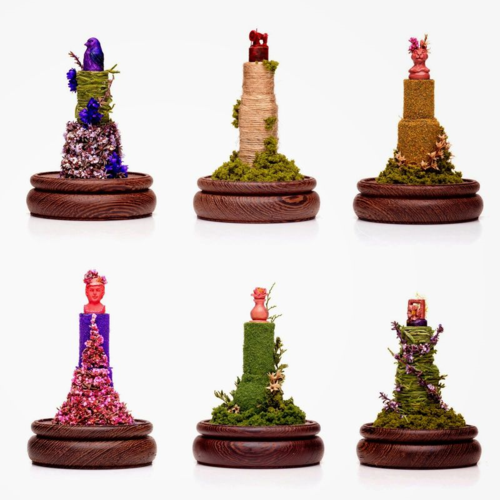 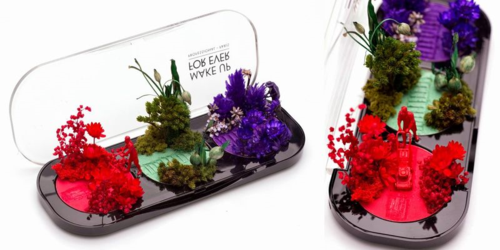 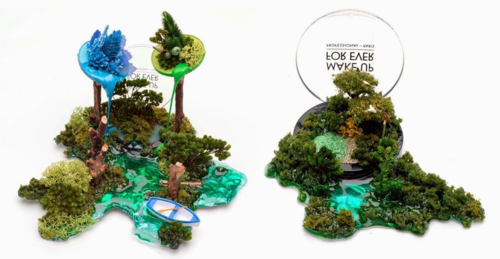 These objects in particular were very intriguing.  I'm not 100% sure because as I noted earlier, Google Translate made no sense, but I think the one on the far left is supposed to be a lipstick likeness of Make Up For Ever founder Dany Sanz.  I really have no idea what the others are, but they might be sculptures based on sketches by Sanz. 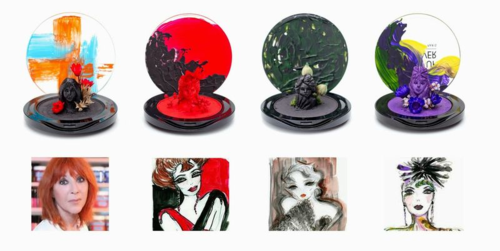 Be sure to check out some real-life photos here and here by people who were lucky enough to attend the event and accompanying exhibition.  The sculptures look even more amazing than they do in the stock photos.  And I liked the simple vitrines used to display the objects.  I'm also wondering what happened to the pieces she made, like if they ended up in the Make Up For Ever archives or if they were sold.

So what do you think of May Sum's latest work?  Do you like her Make Up For Ever creations more than her previous lipstick sculptures?  I think it's all amazing and I can't choose one over the other!  All I know is that the Makeup Museum is in desperate need of one of her works.

Posted at 09:24 PM in Exhibitions and museums, Makeup as Muse, Other makeup brands | Permalink | 0 comments