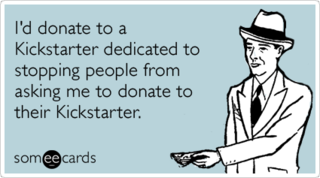 The idea of fundraising makes me very uncomfortable, so much so that I've always avoided the topic.  However, I came across this article over at Gawker about sad Kickstarter projects that received zero money and decided this would be a good time to address fundraising; specifically, a new way of raising money known as crowdfunding.   The article captures why I'm not doing anything of this sort at the moment, so I thought today I'd explore the idea of crowdfunding for museums and why I don't want to engage in it for the Makeup Museum.

Museums can certainly benefit by using crowdfunding, especially since, as this post over the Center for the Future of Museums blog points out, Kickstarter and the like reduce funders' risk (you only pay what you pledged if the full goal is reached) and also have the ability to go viral via social media, something that doesn't happen with the more traditional fundraising methods.  The social media aspect also helps target the all-important youth demographic.

Indeed, some campaigns are wildly successful, like the one for the Tesla Museum run by The Oatmeal artist Matt Inman.* Smaller projects exceed funding goals as well, like the Chicago Design Museum, the Hollywood Science Fiction Museum or the Museum of Food and Drink.  Like the Makeup Museum, these were the long-term projects of a few dedicated people that were finally able to have a permanent physical space thanks to Kickstarter.  On an even smaller scale money-wise, various exhibitions hosted by existing museums, on subjects ranging from burlesque costumes to the work of cartoonist Al Jaffee and costing just a few thousand dollars, regularly meet their fundraising goals. This isn't surprising, as the founders of Kickstarter publicly announced in 2013 that they are looking to help fund museum exhibitions and other projects.  The funds cannot be used for operational costs, but go towards "specific programming or ventures".

So it would seem as long as you aim low and keep the total goal below $20,000 (unlike these unsuccessful campaigns - they went big and failed), your museum, or at least an exhibition, would have a good shot at getting funded.  However, there's really no predicting what will get the cash rolling in.  Even smaller projects that ask for $20,000 and under - and that also seem pretty cool to me - got next to nothing.  Why do people not want to fund toy museums?   Or an exhibition on queer fashion at the Fashion Institute of Technology?  The results are even more dismal at Indiegogo - my museum search there yielded literally hundreds of museums and exhibitions that didn't earn a single cent.  (Note: This is partially due to Kickstarter completely dominating its crowdsourcing platform competition.)

Additionally, the overall rates are not great either.  In 2012 only 50% of crowdfunding campaigns got funded.  On the Kickstarter stats page, as of today the success rate for the categories of design and art were 36% and 45%, respectively, with fashion coming in at the second lowest of all categories (27%).  I'm guessing the Makeup Museum would fit somewhere in one of those three, and those are even less than the 2012 global average of 50%.  I'm a glass half-empty kind of person so I'm not willing to do the amount of work required to develop and launch a campaign - the odds of my museum getting funded would have to be drastically higher.  Moreover, the most successful campaigns are ones that are backed by a massive social media presence, something the Museum sorely lacks.  I hate Facebook, I only have a handful of followers on Twitter and Pinterest, and only just yesterday did I reach an average of 100 page views.  (Sometimes blogging is a lot like high school, i.e. a popularity contest, something I never win.)  And unlike most beauty bloggers, I have zero connections to the beauty industry.  If an influential beauty blogger who is regularly in touch with PR reps from a big cosmetics company decided to start a Kickstarter campaign for a makeup museum, they'd have no trouble at all - I could absolutely see L'Oreal or Estée Lauder doling out the cash pretty easily.  No one, especially a huge company, is going to want to back something that doesn't have a significant following on social media.

Then there's the matter of asking friends, family and strangers for money via social media, an idea that makes me very uneasy, especially when it comes to the first two categories of people (see the some e-card above).  I would never ask them to contribute to the museum face-to-face, so why would a crowdfunding campaign be acceptable?   I'd be fine applying for a grant from a foundation because dispensing funds is what a foundation does, but crowdfunding just seems like standing there with my virtual hand out begging for money.

Finally, the emotional risk is too great.  I wouldn't lose anything financially, but I would be so crushed at not reaching even a small goal.  The only thing I'd even consider using Kickstarter for would be my oft-mentioned coffee table book that I never get around to working on (or my '90s beauty book).  That seems like a worthwhile, tangible item that people may be willing to pay for and it's small enough that it could be feasible, but I'd be so sad if people didn't want to pay even for a book.  Anyway, the museum is a reflection of me and I absolutely would take it personally that the campaign failed. Unsuccessful blogging is one thing - I enjoy blogging for its own sake so a lack of readers and page views doesn't bother me that much - but a failed crowdfunding campaign would really sting.

Speaking of which, there's the matter of the logistics of developing a good campaign that would make this seem like a legitimate museum and not just a pet project that some crazy lady with a lot of makeup dreamed up.  I know if I don't do a perfectly on-point campaign, there's no way people are going to give their hard-earned dollars for something they perceive as another vanity project.  With no background in fundraising and no real creative skills, I couldn't fathom designing an appealing campaign that people would see as worthwhile.  Also, not only would I be sad and embarrassed, I'd also be enraged people were willing to pay $55,000 for some guy to make potato salad while my idea went nowhere.**  A beauty museum may not be brilliant but it's better than potato salad!   Overall I'm already disappointed and frustrated about the direction my "career" took, so I simply cannot tolerate another failure involving something else I hold so close to me.

There is another crowdfunding platform that deviates slightly from the Kickstarter/Indiegogo models, but I don't want to use that either.  Patreon is a way for people to pay on an per-project basis, i.e. you can "commission" an artist to create something, be it a song, a painting, or a movie.  But many bloggers use it as a way offset some of the costs that come with providing quality content, or to get paid for blogging in the hopes of transitioning into their projects full-time.  One Tumblr I follow, Medieval POC, uses Patreon to help pay for costs such as academic database membership fees as well as projects like a print shop and "theme weeks", i.e. posts on a specific topic.

Plus, Patreon doesn't seem quite as obligatory as a typical crowdfunding campaign.  People can still access any content on your website for free, and you can just sneak up a donation link somewhere on your site - no fancy campaign and networking required (although I guess if you want more people to give you'd have to make some kind of announcement).  They only donate if they choose and to whatever project they want.  I imagine that if I implemented it for the Makeup Museum, I'd have an option for someone to donate every time I post an exhibition.  It would be sort of like online "suggested donation" box, something that I'm not totally averse to having if the museum occupied a physical space.  Or I could use it for membership fees like the $895 annual cost for access to Women's Wear Daily and its archives.  WWD is a tremendously valuable resource that I could use when writing cosmetics history posts.

However (you knew there was a "however" coming), as with Kickstarter, Patreon isn't something I feel comfortable doing.  I already put my exhibitions up completely for free, so why would I start asking for money now?  If I lost my job and wanted to keep the blog going maybe then I'd consider it, but given that my exhibitions are in my house at the moment it would probably come off as "buy expensive makeup for me so I can take pictures of it and put it on a shelf in my bedroom."

The TL;DR version:  I don't have the time, connections or social media presence to run a crowdfunding campaign right now and the success rate isn't high enough to be worth the crushing sadness I'll experience if my project isn't funded.  Thus I am not attempting it.

What do you think of crowdfunding?  What projects have you given to, if any?  And just out of curiosity, would you contribute to a Makeup Museum fund or towards a book on contemporary cosmetics?

*I'm still bitter that with a single Tweet and one phone call, Inman was handed a check for $1 million by Tesla Motors CEO Elon Musk in addition to the $1.3 million his project had already earned through Indiegogo.  I  guarantee there's no way the CEO of Sephora or L'Oreal would throw that kind of cash at me for my museum.

**I know I've mentioned it before and that the project was originally conceived as a silly prank, but it really burns my toast nevertheless.