Today's post will conclude my series on Too-Faced Quickie Chronicles and the original artwork that was used for the covers (see the 3 previous entries here, here and here).  I was pleased I was able to find the original images for every palette, but I'm dismayed that these particular ones do not have an artist listed.  All of the following were done by anonymous or unknown artists.

Afterglow (1949) was used for the Hopeless Romantic palette.  Looks like they completely dismissed the guy in favor of a plethora of hearts. 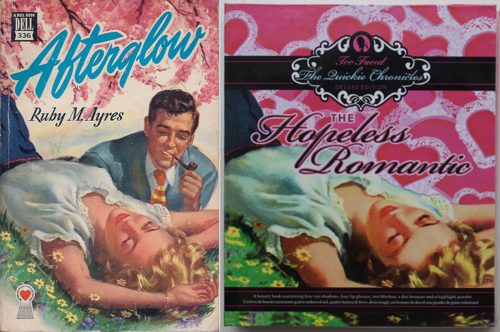 The mini Make A Wish palette was based on the Leg Artist (1949). Divorce Bait (1949) was used for The Starlette palette (isn't it spelled Starlet?) As we saw with several previous Too-Faced Quickies, I guess the original model was also too racy this time - her strap has been firmly placed back on her shoulder and the entire garment is opaque rather than the sheer number we see in the original image. 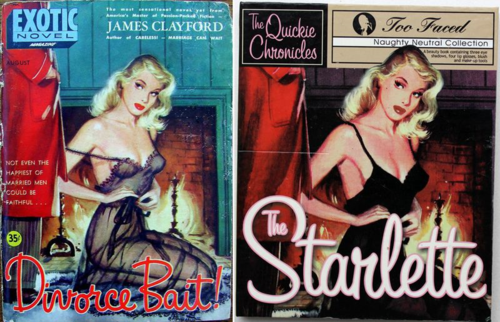 Wild Parties (1950) serves as the original image for The Party Girl palette.  I'm not sure why the image is reversed or why the woman's cup is removed from her hand.  Can't a grown woman enjoy a drink? 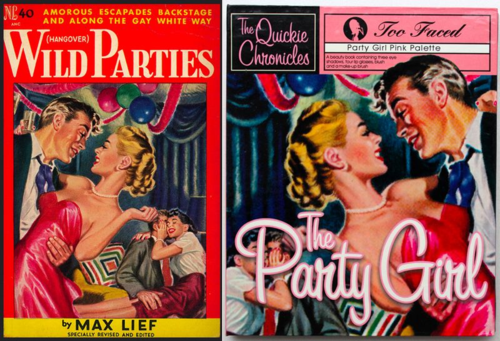 The model in Untamed Darling (1950) posed for the Glamour Girl palette, with the apple cleverly swapped out for a compact.  More pearl-clutching, I noticed - this time Too-Faced made sure she had underwear on as opposed to the original image. 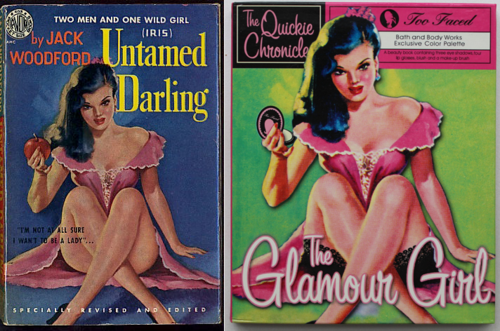 Call South 3300:  Ask for Molly! (1958) was used for the Sephora-exclusive mini palette released in honor of Too-Faced's 10th anniversary.

This is another one I don't own and couldn't find a good picture online, but you can sort of make it out on the lower left in the photo below. 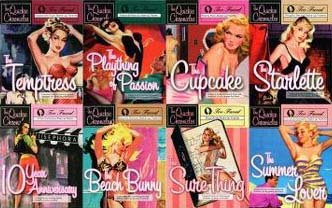 The allure of the stewardess was captured in Flight Girl (1965) which Too-Faced used for the Jet-Setter palette.  I couldn't find a larger picture of this cover. 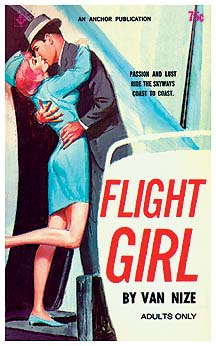 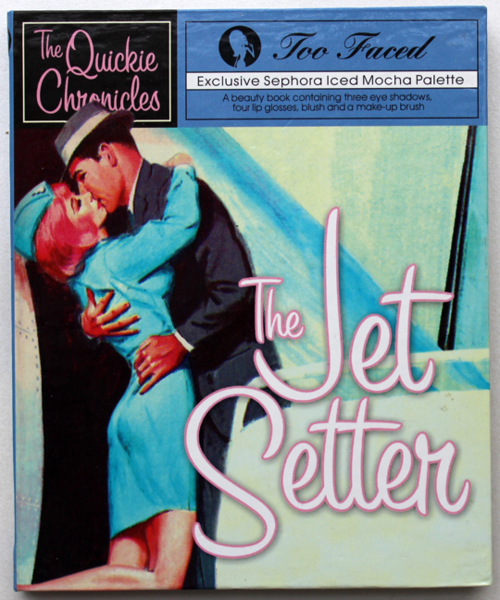 I burst out laughing when I saw the title of the pulp novel whose cover was used for the Fun in the Dark palette (which, incidentally, I never did get around to buying).  This one was from 1962. 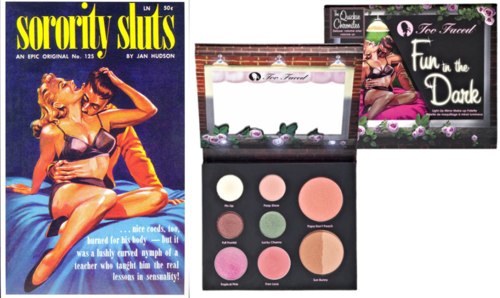 (images from tumblr.com and makeup4all.com)

We're up to the very last palette.  At this point I'm pretty sure Helen Lovejoy was behind some of the design changes. 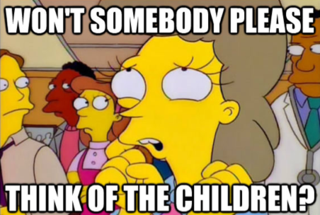 The Beach Bunny palette was based on Surfside Sex (1966).  Heaven forbid we see some undone bikini straps! 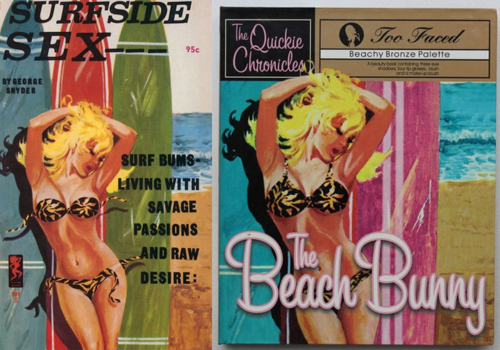 My parting thoughts: I was really excited to be able to track down these images and match them up, but I still have so many questions.  I guess the retro trend was pretty big in the early aughts so that might explain why Too-Faced looked to pulp novels as their inspiration for a series of palettes, but I want to know the details, i.e. why they chose particular covers.  I'm especially curious to know why they modernized the illustrations in some regards (like erasing the cigarettes held by some of the women) but were very conservative in other ways (alcohol, implied nudity and in some cases, a wayward strap or copious amounts of cleavage are apparently unacceptable.)

That concludes the series on Too-Faced Quickie Chronicles palettes and their corresponding original artwork.  Hope you enjoyed it as much as I did researching it.  :)