Welcome to part 3 of my series on identifying the original artwork for Too-Faced Quickie Chronicles palettes.  Since today's palettes are one-offs, meaning the artist's work was used for only one palette, I'm not going to provide bios for each of them - otherwise this post would be way too long.  Instead I'm linking to their information (where available) in their names so you can click on that if you're so inclined.   Here they are in no particular order.

First off is Sin in Space (1961), illustrated by Robert Stanley and used for the Future Lovers palette.  I spy more prudery from Too-Faced in that they lengthened the model's shirt.  So they're against both cleavage and underboob. 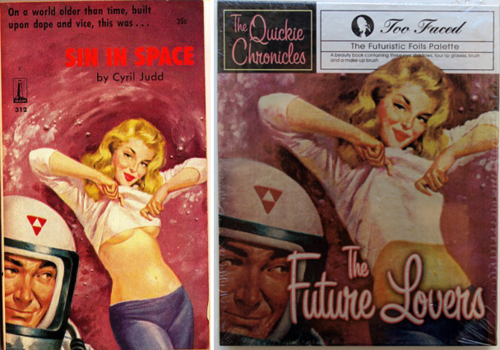 Tempted! from 1949 was illustrated by Fred Rodewald and used for the Summer Lover palette. 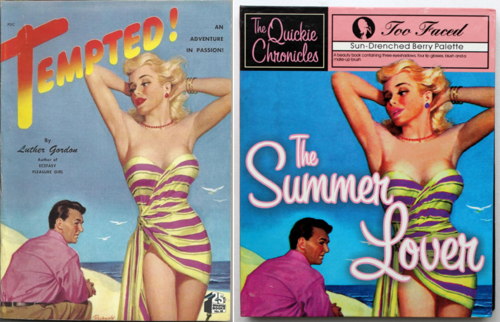 Here's She Couldn't Be Good (1951) illustrated by Ray Pease for the  Man-Eater palette.  I can't quite figure out what's going on in the background in the palette - the size of the pillows is off compared to the original. 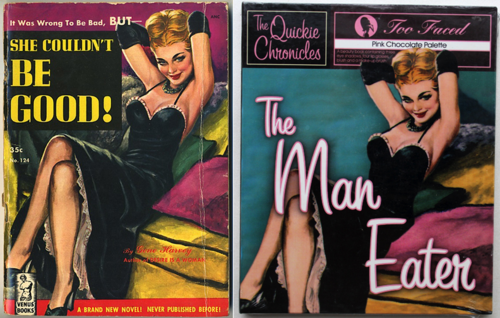 Carnival of Love (1949) illustrated by Ray Johnson was used for the Plaything of Passion palette.  Is it me or is the blonde in the background totally giving us the stinkeye? 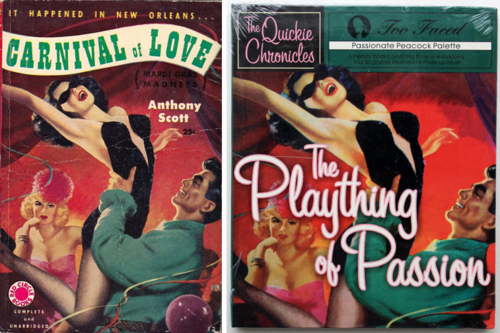 The cover of the August 1949 issue of Coronet magazine, illustrated by Wesley Snyder, was used for the Bathing Beauty palette.  Here's a funny story about this.  In my usual scatterbrained state I couldn't locate the picture I took of this palette in my files so I thought I'd just re-shoot it.  When I went to fetch the palette from storage I couldn't find it anywhere.  I basically overturned my house looking for it in a panic...only to realize that it was still sitting on the exhibition shelf in the bedroom, as I have yet to dismantle the summer exhibition.  Duh.

Anyway, the original Coronet cover oh-so-helpfully advertises its article on "ways to find a husband." And I thought it was tough being a woman now. 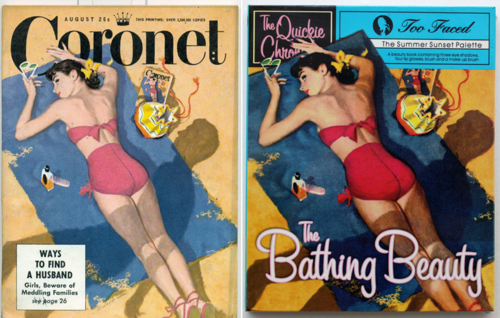 The Life of the Party palette was modeled off of a cover for a December 1940 issue of Love Story Magazine designed by Modest Stein.  Unfortunately I couldn't unearth a larger picture of the magazine. 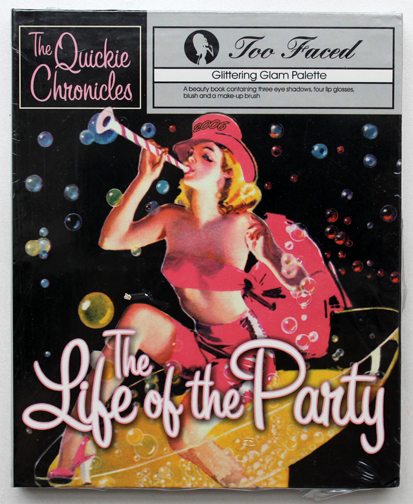 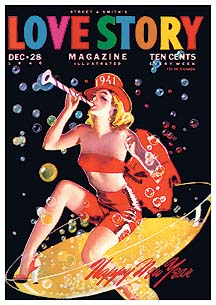 Finally, we have It Happened in Hawaii (1961) created by Tom Miller for the Tropical Tease palette.  It looks like Too-Faced interpreted the original image to have a more Caribbean feel since they named it the Spiced Rum palette. 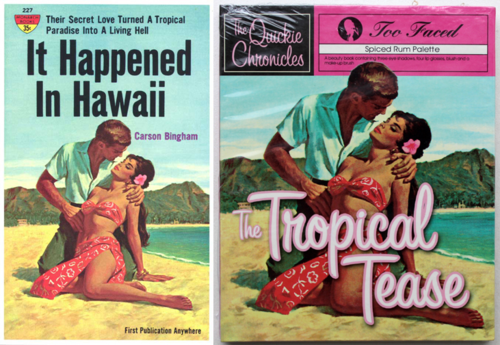 That's it for today! The series will wrap up in part 4, where I was able to match the artwork but the artists are sadly unknown.