As I mentioned last week, I gasped rather loudly when I saw these Dolce & Gabbana powders at British Beauty Blogger.  As of this writing they're only available to purchase at Harrod's but hopefully they will be making it stateside soon, as they are at least listed at the official D & G website.

The Collector's Edition powders have a striking red outer case and a beautiful embossed design based on an ancient Greek coin featuring the head of Athena in profile.  In a sad attempt to improve my pictures I dug up one of my old art history books on Greek art and used it as a backdrop. 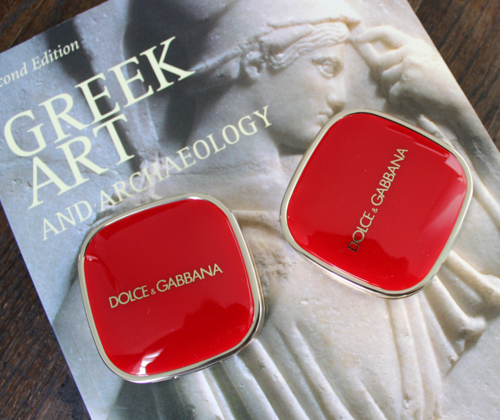 First we have the Illuminator, a pale beige with extremely faint shimmer.  Even in bright sunlight I could barely see it, so I'm not sure how much illuminating it can actually provide. 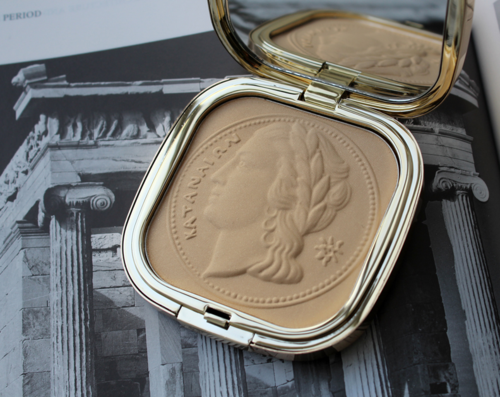 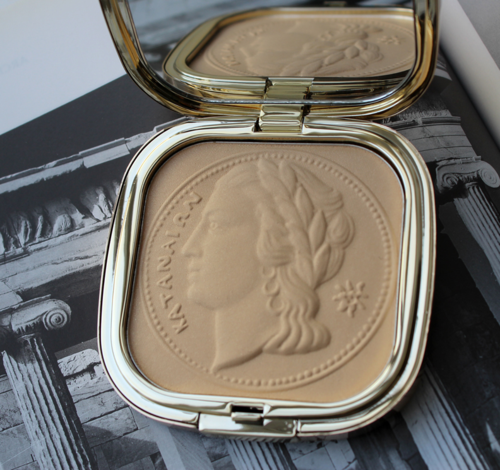 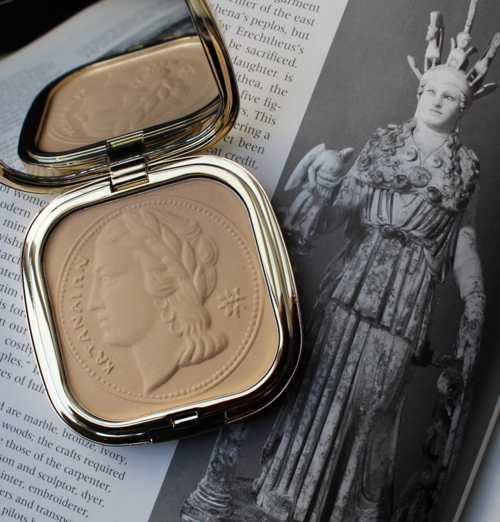 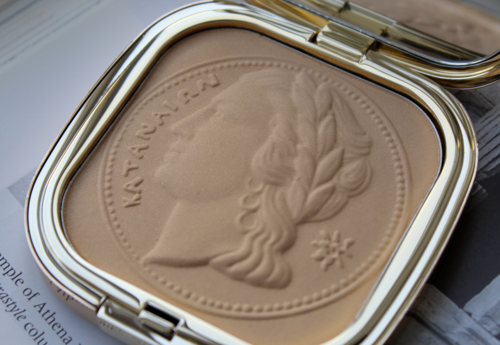 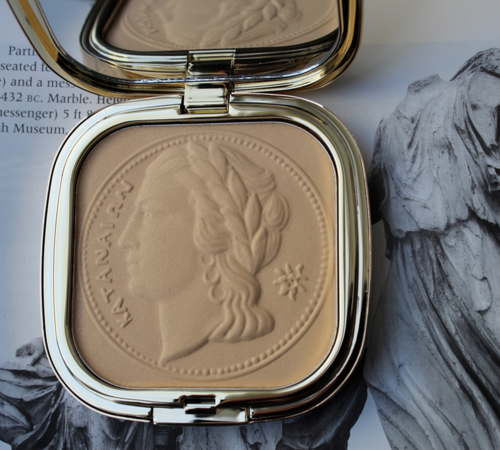 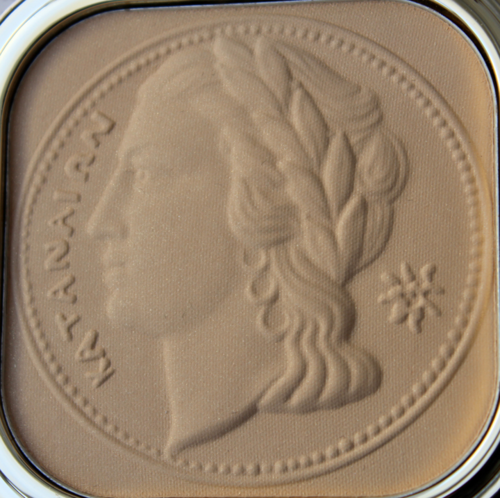 And here's the bronzer.  I think the design works better when there's more shimmer as it provides a nicer contrast. 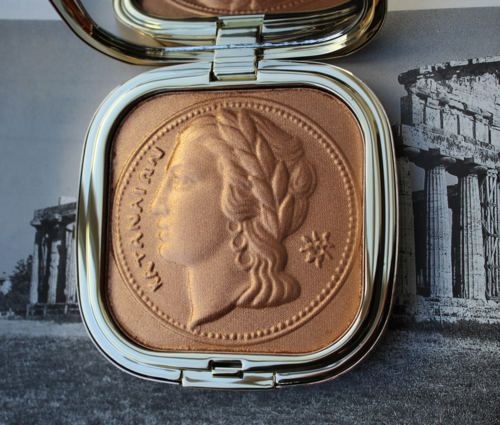 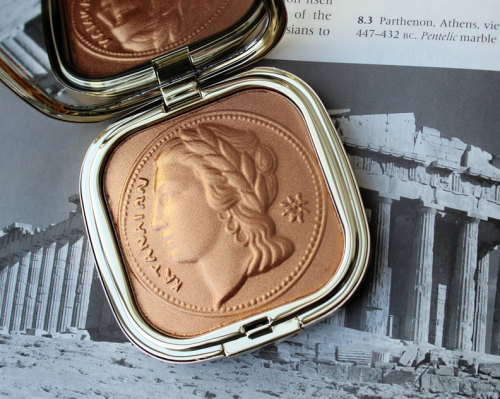 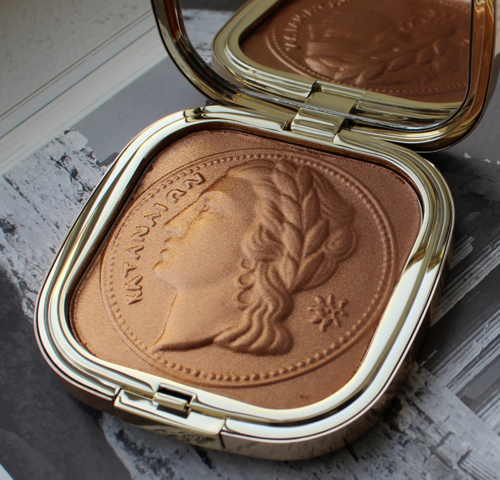 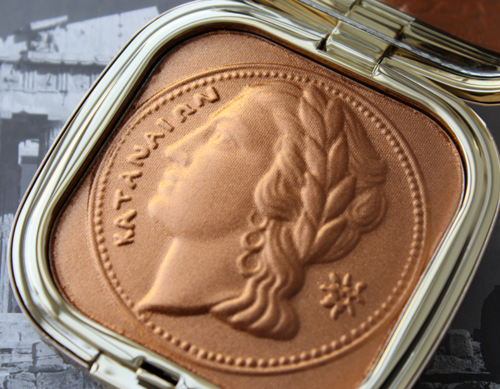 The design is not new for the palette, as it was borrowed from one of the many coins that appeared in D & G's spring 2014 ready-to-wear collection, which was inspired by Sicily's ancient Greek heritage and yet another nod to Dolce's Sicilian roots.  Says one reviewer of their runway show that took place in September 2013, "Today was [D & G's] umpteenth collection drawing on yet another facet of Sicilian culture, in this case the island's interaction with Greece in the ancient world. Sounds kind of academic, but it wasn't. Dolce and Gabbana are designers, after all, not history teachers. So when they used old photographs of ruined amphitheaters as prints, they had a pleasing graphic quality. Ionic columns reproduced as heels on shoes were a flash of wit. So were the gold coins that exploded into chunky prizefighter-like corset belts, especially when those belts gripped delicate dresses petaled with Sicily's almond blossom."

I thought my head was going to explode when I saw the sheer amount of gold coins sprinkled seemingly everywhere, including, yes, a variety of belts: 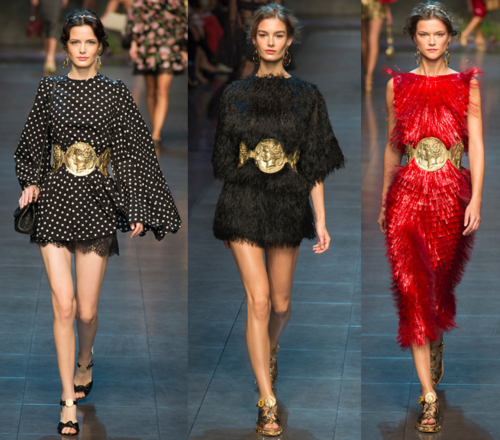 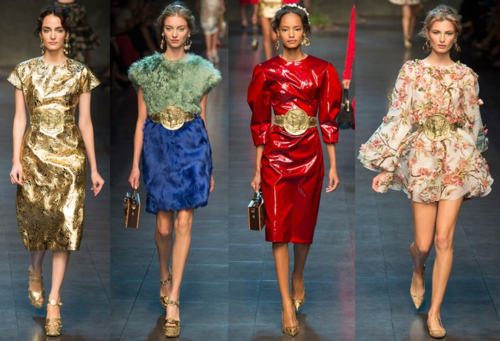 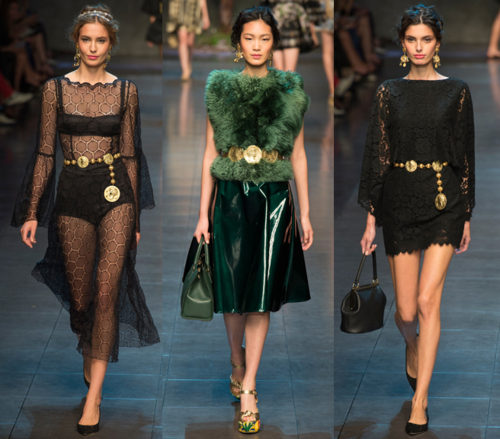 In addition to the earrings all the  models wore, coins also appeared in necklaces: 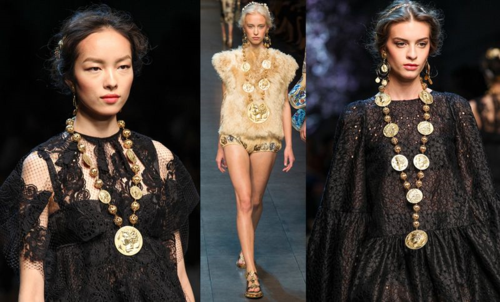 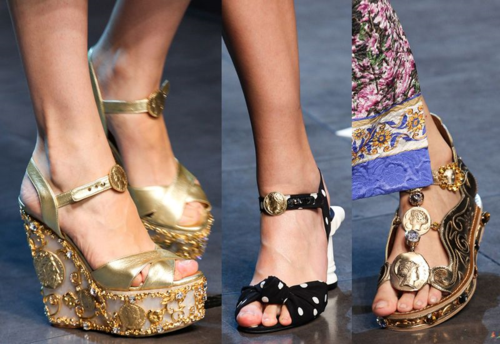 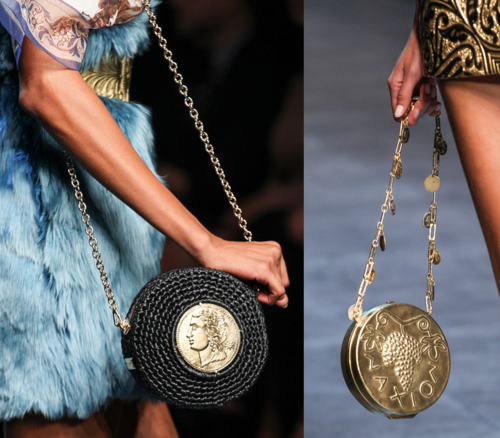 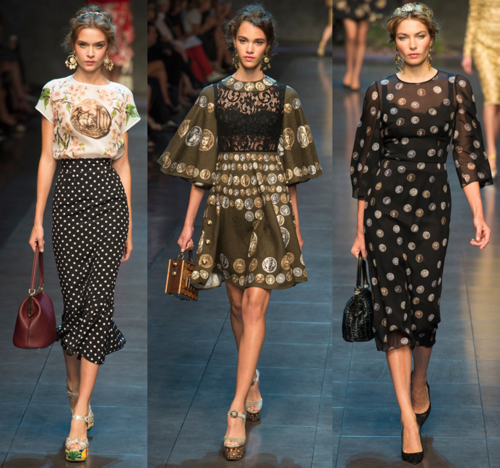 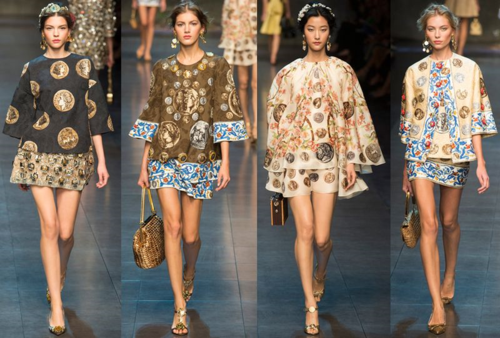 And sometimes in both metal and print:

Coins also mingled with the aforementioned pictures of ancient Greek architecture and ruins, either in print or in belts. And one look had the trifecta of a coin belt and print combined with the architectural print.

Finally, here is the coin that appears on the palette. 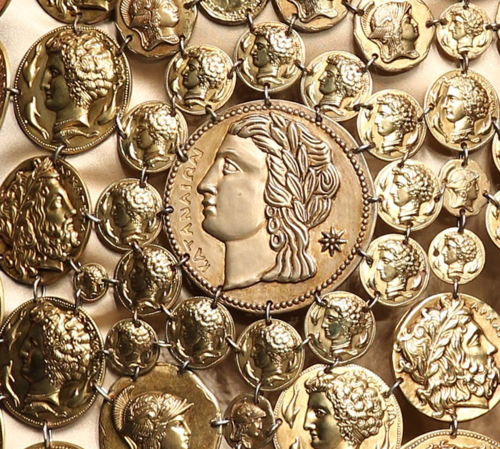 This particular coin was taken from this dress.

Since I'm not familiar with ancient Greek coins and I wanted to know whether D & G's versions had any historical basis I did a little light research online.  Athena was often depicted on currency with a variety of motifs on the reverse side, most commonly an owl since she is the goddess of wisdom.

I couldn't find any depictions of Athena herself (more specifically, her hair/helmet) that looked to be identical to the one on the powders, nor could I find the little flower-like design on the lower right, but I did come across the inscription, ΚΑΤΑΝΑΙΩΝ. 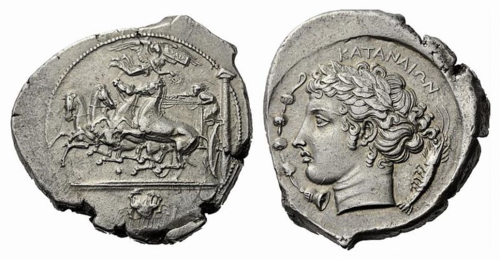 This refers to the city of Catania, one of the Sicilian cities ruled by ancient Greece.  Based on the coin above that depicts the god Apollo, it looks like D & G might have borrowed the sheaf of wheat he wears in his hair and worked it into their depiction of Athena. (I did not come across any coins from Catania that showed Athena, only Apollo.  This doesn't mean they don't exist, I just didn't see any online).

As a side note, being obsessed with mermaids, I had to figure out what the basis was for the design of another frequently used coin in the collection since it had dolphins and as we all know dolphins and mermaids are the best of friends.  I was able to identify it as a coin associated with another Sicilian city. 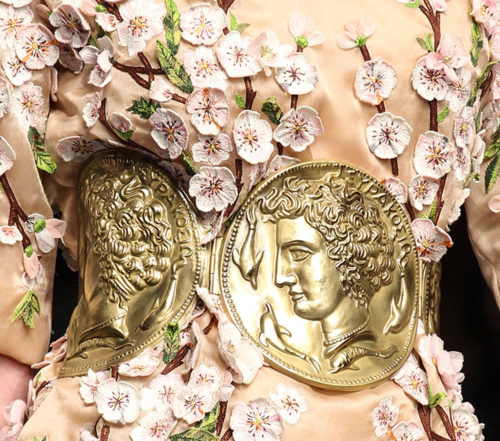 ΣΥΡΑΚΟΣΙΩΝ is inscribed on the coin, which translates to Syracuse, also founded by the ancient Greeks.  Their patron sea nymph Arethusa appears on many of these coins, wearing a pearl necklace and surrounded by dolphins. 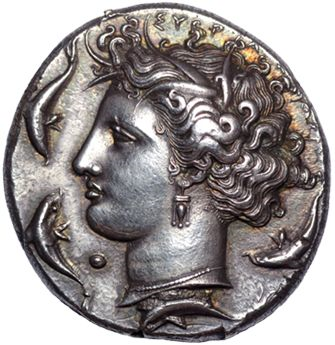 As the story goes, she fled to Sicily to escape the pursuit of the river god Alpheus.  So she's not a mermaid but I'm satisfied with the myth regardless.  :)

Getting back to the palettes, I haven't been this dazzled by anything in months.  I love that the design came directly from one of D & G's collections as well as the overall theme of Sicily by way of ancient Greece.  Although the design took some liberties with the motifs found on authentic ancient coins and the coins on both the runway and the palettes are literally the same, I feel as though there was some thought put into it - the company really leveraged the coin design by knowing it would look gorgeous on a palette, and I liked their choice of the Athena-inspired coin.  The sea nymph one would be more appropriate for a summer release, plus mythologically speaking, Arethusa doesn't have quite the same standing as Athena.  And it's unique, since I've never seen a rendering of an ancient coin on makeup.  I just wish there was a third powder in a brilliant shiny silver!

Will you be picking these up should they arrive near you?

*I meant to get this post up yesterday but was completely incapacitated with a migraine. I had most of the post completed over the weekend and was going to put the finishing touches on last night after work, but I felt so bad I basically laid on the couch and didn't move for the rest of the evening.  :(  I would have just waited until next Monday, but I was determined to be the first U.S. blogger to have real-life pictures of these palettes!