As I'm still trying to build my knowledge of vintage cosmetics and beauty history, I thought this book would a valuable addition to my collection.  Beauty and Cosmetics: 1550-1950 by Sarah Jane Downing  is one of the few easily available resources that condenses the history of Western beauty practices and ideals in one short tome.  That's essentially my only gripe with this book - it's honestly more of a booklet, topping out at a mere 64 pages. I would dearly love to see something much longer and in-depth. 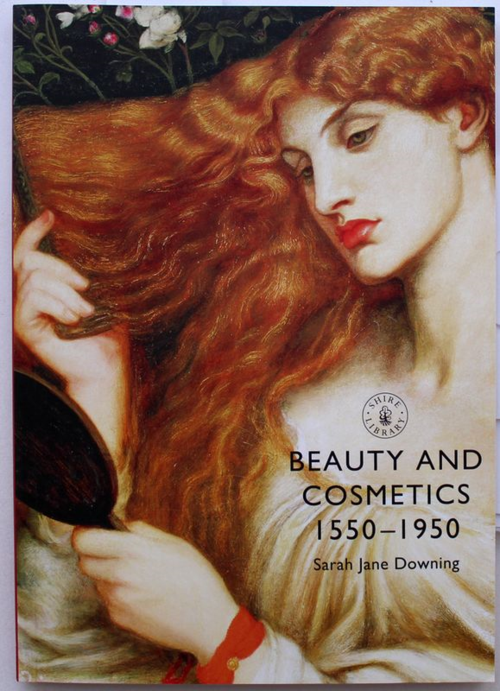 The first chapter discusses beauty ideals in Renaissance Europe and their roots in medieval religious beliefs.  While it wasn't my favorite read, it provides the necessary groundwork for the upcoming chapters.  The second chapter, in my opinion, is where things get more interesting as Downing reveals some fascinating details on the ingredients and processes used in cosmetics production from that time.  She begins with the beauty regimen of Queen Elizabeth I, which included painting her face with the highly poisonous ceruse, "a concoction of finely ground white lead powder, mixed with vinegar and applied over the face and neck."  Ack!  The author notes that while alternatives made of alabaster or starch were available, these did not provide the luminous, completely smooth perfection that a lead-based product did.

The next chapters deal with cosmetics usage in the 17th and 18th centuries.  I was quite intrigued by the information on "patches", a.k.a. fake beauty marks or moles.  I have been meaning to write a post on these for a while now (I got the idea around the time I wrote about faux freckles) and Downing's work will definitely be included as a reference.  I'm now also a little obsessed with the idea of acquiring an antique patch box.  The illustration of an aging woman applying patches (below) is fabulous, but I would have loved to have seen a few pictures of actual patch boxes. 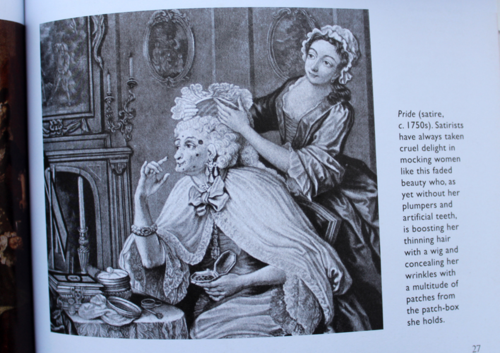 Another interesting tidbit: to counteract the hair loss caused by the frequent wearing of ceruse, women sported false eyebrows made from mice fur.  I guess this isn't so weird, given that in the 21st century we have fake eyelashes made from mink.

Next up, Downing describes the dramatic turn beauty trends took in the early 19th century.  The heavily caked-on white makeup and patches so popular with the French aristocracy quickly fell out of favor after the revolution.  A more natural look was strongly preferred, although sometimes this also made use of an equally dangerous method as ceruse.  "A derivative of deadly nightshade, belladonna - 'beautiful lady' - was so named for its beautifying effects as it would dilate the pupils, making the eyes poetic, dark limpid pools.  Unfortunately the side effects were less than pretty as it could also cause blindness and possibly paralysis."  Yikes.

This chapter also touches on the monumental shift in how cosmetics were perceived and the rise of the beauty industry in the late 19th century.  While images of ideal beauty remained fairly consistent  (patches and plucked brows aside, other attributes - rosy cheeks and lips, sparkling eyes, clear skin - were still in style) there was a sea change in how the products required to achieve these qualities were produced.  Plenty of women still relied on homemade potions made with recipes passed down through generations, but pharmacies selling pre-mixed unguents were rapidly expanding . Below are some of the earliest beauty ads I've ever seen (1880 on the left and 1897 on the right). 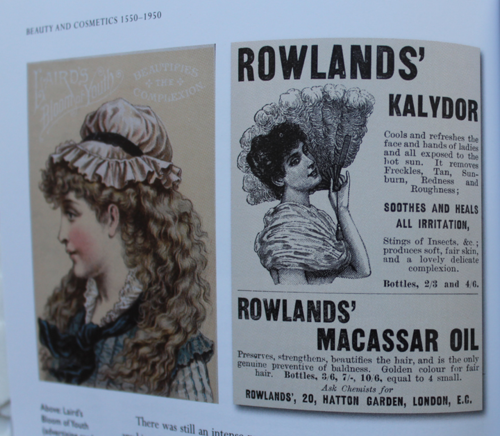 The final two chapters outline how the industry took off in the early 20th century and the formation of the major brands we know today.  While other books have covered this era, it's refreshing to see another perspective joining in with different ads and bits of history.

The bottom line:  as with basically all beauty books I've reviewed, this is a great read for anyone interested in beauty history.  However, it is by no means comprehensive (not that I think it was meant to be) so it left me yearning for more, despite the "further reading" list included in the back.  Perhaps Ms. Downing and I could collaborate and write a book on beauty in the same time period but have it be 10 times as long.  I can dream, right?