I love getting inquiries but I hate when I let the inquirer down by not having an answer!  This one was truly a head-scratcher.  A woman emailed me explaining that she used to collect beauty ads, and sadly her house burned down and she lost the entire collection (one of my biggest fears!) She wanted to know whether I remembered one of her favorites that was lost so that she could try to track it down.  The ad description is as follows:

- Was for a drugstore company (Cover Girl, Maybelline, etc.);

- Featured a "smoky and myterious" palette, comprised of "dark greens and purples and blues, very autumnal and mystical";

- In addition to the model, there was also a cat in the ad.

Unfortunately, since I didn't get into collecting until about 2004, I had no memory of this ad.  I scoured the Interwebz for hours trying every imaginable phrase in Google image search and on Pinterest.  But I know not everything is online so I thought, we'll do this the old-fashioned way.  I bought the 1999 and 2001 September issues of Allure as well as the October 1998 and 2000 issues hoping to find it.  Wouldn't it be cool if I could find the actual ad in an old magazine and send it to her to help rebuild her collection?  Alas, nothing fitting her description was in the magazines, nor in any of the earlier ones I had purchased for my failed '90s exhibition - I had kept an eye out for something fitting the description as I went through those.  The closest thing I found was this: 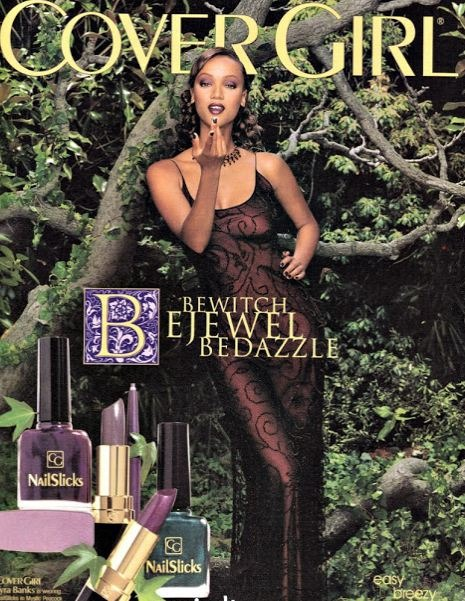 But that's definitely not it.  While the colors, brand and timeframe fit, there is no cat - a detail the inquirer was sure about.  She has also contacted Maybelline and Cover Girl and did not receive a response (um, nice customer service, jerks.)  I think I may have to buy issues from 2002-2004 just to check those as well. I get plenty of inquiries that most likely will turn out to be unsolvable, but I really thought that with all the information she provided and the fact that this is more recent and not from, say, the '30s, I'd have a pretty good shot at finding the ad.  That's why I'm so frustrated at not being able to unearth it.

So my last resort is to ask fellow makeup addicts:  Do any of you remember this ad and if so, can you please comment on this post or drop me an email?  I would be so happy to have this inquiry solved!