The first part of this series focused on the art of George Gross, who did some of the illustrations used in Too-Faced Quickie Chronicles palettes.  Today I'm looking at the work of two more artists whose work was appropriated by Too-Faced:  Reginalde Heade and Paul Rader.

The very mysterious British artist Reginalde Heade was responsible for many pulp covers in the 1950s.  I say he's mysterious because there's not even a formal record of his birth (he was born in either 1902 or 1903.)  According to the author of Good Girl Art, "[Heade] died in 1957, leaving no children, no will and no evidence of his existence other than his signatures on those gorgeous covers he produced.  And in 1954, he even stopped signing his work, when the publisher of the books he illustrated went to jail on obscenity charges.  Heade produced over 300 covers, most of them impossible to find.  He is not listed in any British standard artist references - no one even recalls meeting him."  How strange. I wonder if this man was leading a double life, sort of like Ron Swanson/Duke Silver.  In any case, while he was best known for his covers for pulp crime books, he also did some covers for "romance" novels.

His cover for Plaything of Passion (1951) was used for Too-Faced's Sex Kitten palette.  I was looking for any differences between the two, and it looks like the left side of the pin-up's bra provides a little more coverage than in the original.  Who would have thought we'd be more prudish in the early 21st century than in the 1950s? 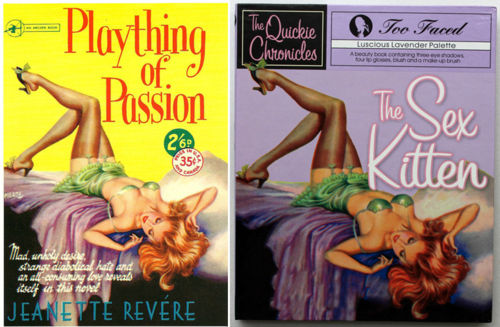 Heade's work for the 1950 book Coffin for a Cutie (uh, nice title) was also used for the Bad Girl side of the Too-Faced Good Girl/Bad Girl palette.  The Good Girl side is by an unknown artist and used for a book titled No Time for Marriage. 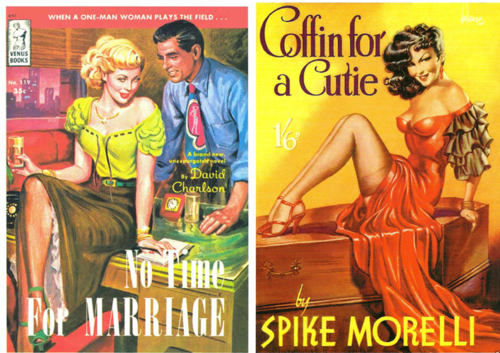 Sorry for the small picture.  Believe it or not, I actually don't own all the Too-Faced Quickie Chronicles, and this was the best stock photo I could find. 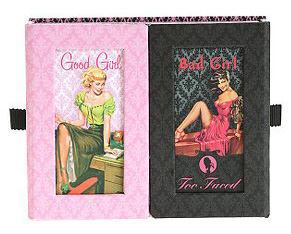 Now on to the second artist of this installment, Paul Rader (1906-1986).  Fortunately there's a lot more information on him.  He got his start painting portraits of well-to-do figures in Detroit in the early '30s.  In the early '40s, with a family to support, he moved to New York and began doing advertising illustrations for various companies like General Electric.  By the late '50s he had started getting work with top publishing companies, most notably Midwood.  It was during this time that he cemented his status as a top illustrator for pulp novels.  His wife Edith explained, "[Paul] had the ability to create a desirable woman on canvas...his idols were [George] Petty and [Alberto] Vargas. Paul loved George Petty’s formula for turning each woman he painted beautiful. But Petty’s girls were sometimes anatomically impossible, if those legs were real they would be 9 feet tall. Paul was more of a realist.”  (source)

Among the many pulp novel covers he created was for 1961's Sin on Wheels, which was used for Too-Faced's The Makeup Trailer palette.  Saucy! 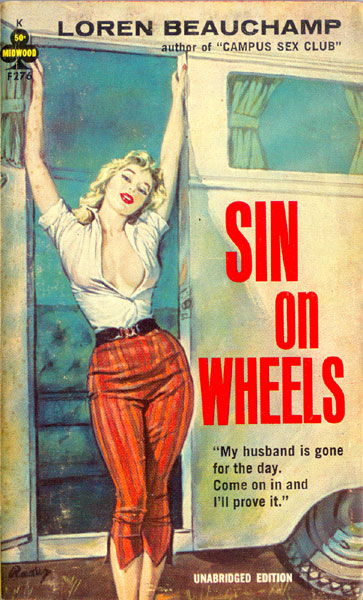 I apologize again for the atrociously small picture - The Makeup Trailer is another one I don't own and this was the only stock photo I could find online. He also did the cover for The Little Black Book (1961), which Too-Faced used for its Sure Thing palette.  I like that there is a nod to the book title in the description of the palette.  I noticed the same kind of change as in the Sex Kitten palette:  Too-Faced covered up the model a bit more by extending her blouse on the right side.  Again, I'm not sure why the company chose to do this.  Does Too-Faced have a problem with substantial cleavage?  I guess they didn't want to sex up the covers too much for fear of offending their consumer base, but honestly, it's a pin-up.  They're supposed to be scantily clad. 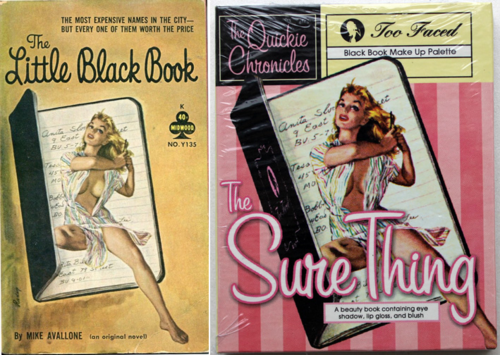 So that's it for today's installment.  Stay tuned for part 3 where I will be covering more artists.