Quick post: imagining the future of your beauty routine

I came across this article at Mental Floss about a series of French illustrated cards produced for the 1900 World's Fair that depicted what daily life might be like 100 years in the future.  They're all pretty great and some are downright hilarious (underwater croquet and eel racing, anyone?), but naturally the one portraying a woman's beauty routine was my favorite.  This particular image was produced in 1910 by an illustrator called Villemard. 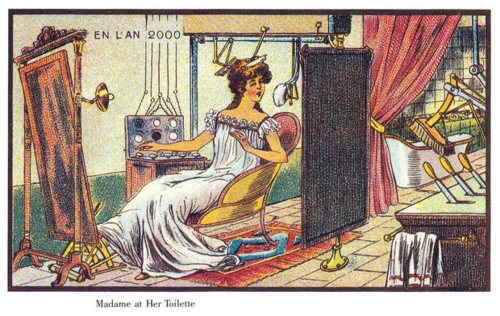 Seems rather complicated for something that should be more efficient in the future, no?  Lots of levers to pull and buttons to push - I think I much prefer the gadgets we have now to the contraptions in this picture.

What do you envision people using in their daily routines in the year 2100?  Assuming I'd live that long, which obviously I won't, I would love to have something that dries and styles your hair perfectly every day in a matter of seconds - no more wrestling with tangled hair and blowdryers!  Villemard's image hints at that but I'd like something less cumbersome and more streamlined, like a helmet of some kind.