Once again I randomly found some really cool makeup-themed stuff while researching something completely unrelated.  I'm sad I missed this collaboration between Italian clothing label MSGM and art magazine Toilet Paper that debuted last summer.  Toilet Paper Magazine is an image-only publication founded by sculptor Maurizio Cattelan and photographer Pierpaolo Ferrari (I dare you to try to make sense of the website), while MSGM is a recently-established line started by former DJ Massimo Giorgetti.  According to a Wallpaper article, the collaboration was an attempt to broaden the reach of Toilet Paper Magazine beyond bookshelves.  "We are interested in trying out our images in different mediums...we discovered that a toad in a sandwich works just as well on a sweatshirt," said Ferrari.  Translation:  we can make more money if we put some of our images onto clothes.  Similarly, Giorgetti saw a golden opportunity to expand his line as well. "I have found thousands of similarities between the subjects of the prints used in my collections and the images printed in the magazine...the images in Toilet Paper have always captured my attention, inspiring and entertaining me."  Translation:  working with established artists gives my line more credibility.

Anyway, while the collaboration did use some non-makeup-themed images from Toilet Paper's archives, there were cosmetics aplenty in a range of colorful tops.  I found them to be delightfully surreal with a touch of Warhol-esque indictment of consumer culture.  We have disembodied men's hands reaching to apply lipstick to non-existent mouth, a monumental row of worn lipsticks, and a shiny eyelash curler just a moment before it clamps down on a pair of long fluttery false lashes. 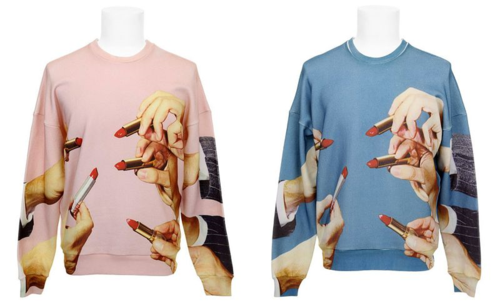 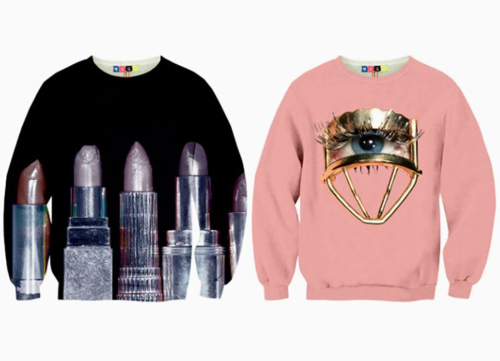 Since I couldn't find any information on these specific images or why they were chosen for the collaboration, I thought I'd look at the individual artists instead.  Pierpaolo Ferrari is a photographic force to be reckoned with, equally adept at shooting ads, editorials and portraits.

Here's a BMW ad and a slick high-fashion spread, both for Vogue Italia: 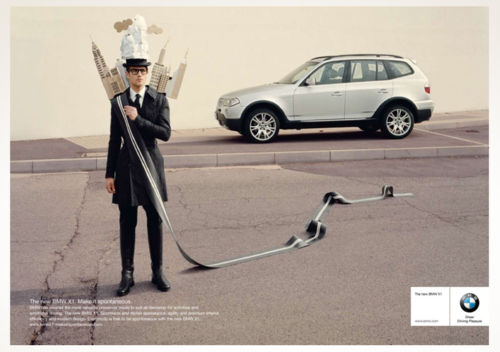 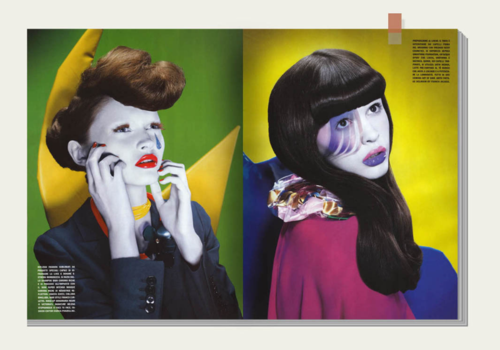 And here's a fantastic portrait of his partner-in-crime, Maurizio Cattelan.  I love that you don't have to know who it is in the picture to fully appreciate it - it's just a great photo. 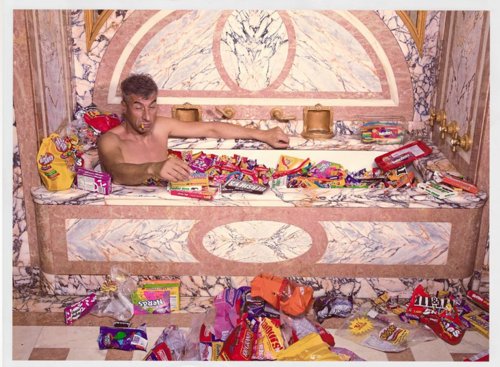 Speaking of which, Maurizio Cattelan's earlier work in sculpture is much darker than the images he helps produce for Toilet Paper.   According to an excellent profile at the Guggenheim's website, he "creates unsettlingly veristic sculptures that reveal contradictions at the core of today’s society. While bold and irreverent, the work is also deadly serious in its scathing critique of authority and the abuse of power."

One of his best-known works is La Nona Ora (The Ninth Hour) (1999) which depicts Pope John Paul II getting hit by a meteorite. 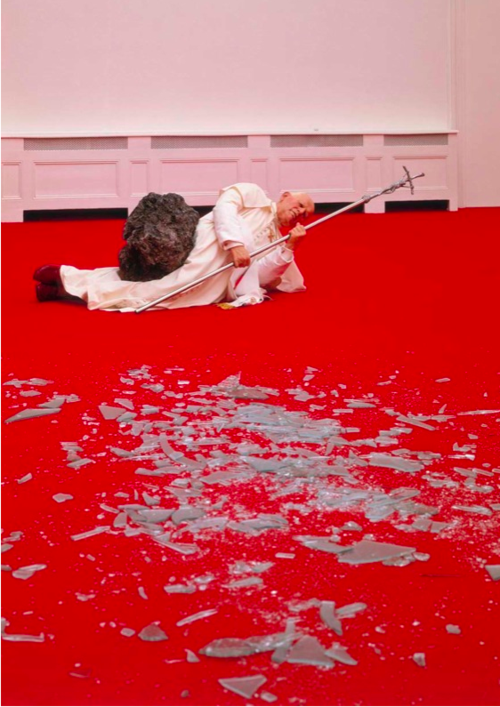 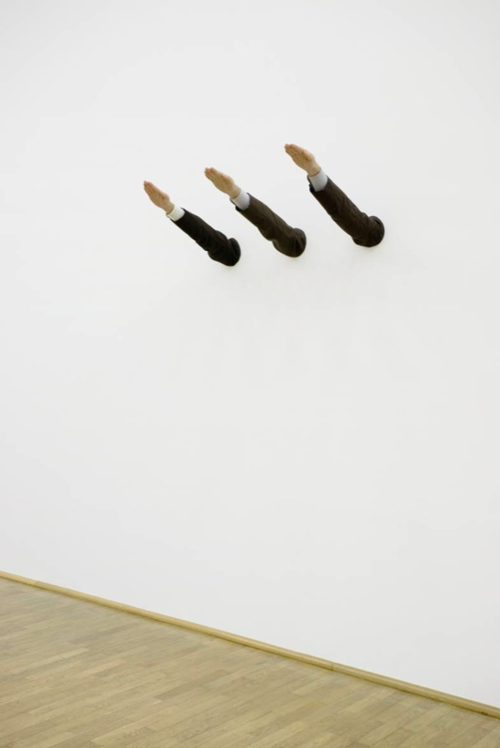 And All (also from 2007), influenced in part by his stint working in a morgue as a teenager. 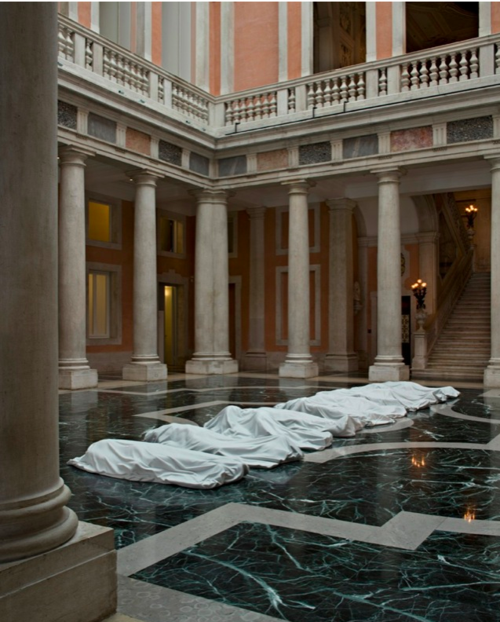 As you can see from this 2012 installation at the Palais de Tokyo, Cattelan's work for Toilet Paper, while still somewhat unsettling, is downright sunny compared to his earlier sculptures. 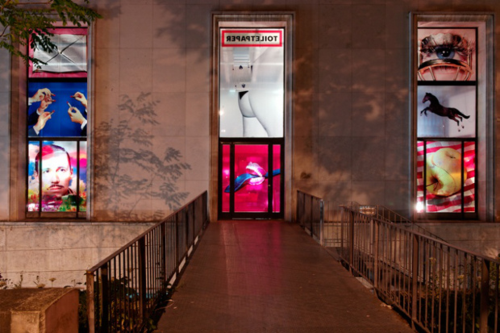 Finally, we have Massimo Giorgetti, founder of MSGM.  In an interview with Harper's Bazaar, he credits the success of his line with a thorough understanding of social media and what young people want.  "Presenting a collection in 2009 with psychedelic prints done by computer and in fluorescent colors was the secret to MSGM's immediate success. Also, right from the beginning we wanted to create a contemporary collection — which wasn't something very common in Italy at the time — and get the message out immediately, considering the impact that social networks were having. I think the market was waiting for a product like ours; many young people were already getting ideas more from the Internet than from the pages of magazines. MSGM is really created for a young public that adores fashion but isn't a slave to designer labels, a public that likes to dare and likes to be noticed."

I have to say I can't really describe the overall style.  The best I can come up with is "eclectic".  There is no one silhouette, print, or palette within even an individual season's collection, let alone from season to season - it's kind of a mishmash of disparate lines and color.  I will say that I do think it's modern and youthful, in that I think someone of my advanced age couldn't pull off any of it! 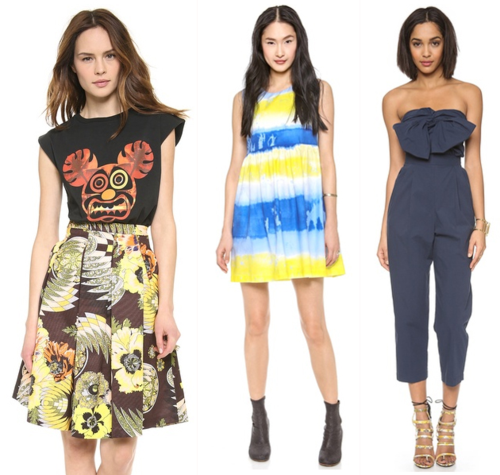 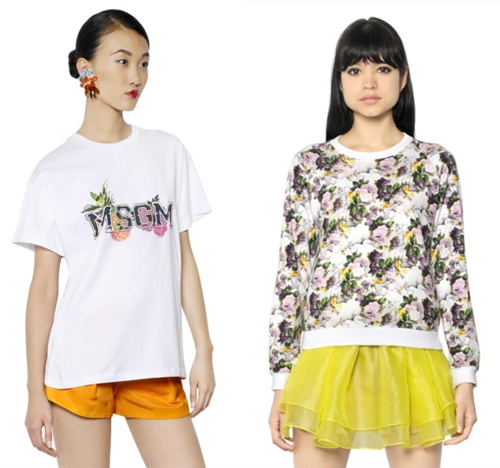 The men's line is equally wide-ranging. 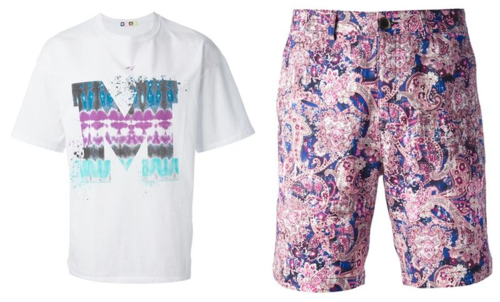 Sidenote:  there is a small sidebar on Giorgetti and MSGM in the April issue of InStyle magazine.

Getting back to the collaboration, I think it's an absolute perfect marriage of contemporary art and fashion.  Both Toilet Paper and MSGM are pretty offbeat, and while I'm not crazy about the latter's clothing in general, the images from the magazine make those simple sweatshirt and tee shapes work.  Given how bizarre they are and the fact that they contain pictures of makeup, naturally I would dearly love to get my hands on any of them.  While they're mostly gone, I think there a few still for sale at ssense.com...heck, I'd even take the men's versions!  I'd still like to know how the original images came to be (why lipstick and eyelash curlers?) and why they were selected to be part of the collection, but I think I've learned enough about the individual artists and designer that I'm sold, even without knowing the full story.  I think they're just part and parcel of the magazine's spirit - avant-garde, flippant and humorous.

What do you think of all this?  And would you wear any of the collection?

Posted at 09:47 AM in Artist collaboration, Couture/Fashion | Permalink | 0 comments