I had always been drawn to The Balm's kitschy retro packaging, especially since it reminds me so much of Too-Faced's Quickie Chronicles palettes (see my original post on The Balm from nearly 5 years ago for the company's background).  Many months ago Hautelook had a sale so I stocked up on a lot of the brand's items that I had been eyeing literally for years.

I got Bahama Mama bronzer, Down Boy blush, Read My Lips lipsticks, Cabana Boy blush, Hot Mama blush, Rockstar palette and one of the Instain blushes. 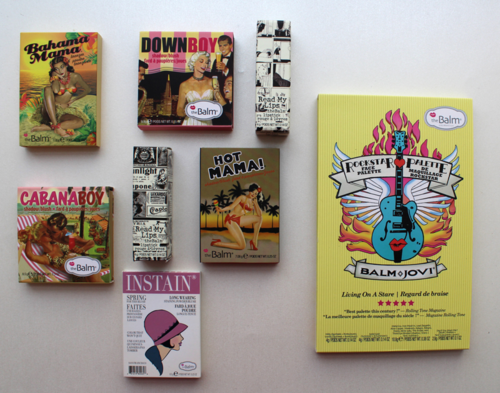 While I still haven't solved the mystery of why the company chooses to go with retro images for a such a modern-themed brand, I did manage to track down a couple of vintage illustrations that were used in some of the packaging.

Illustrator Al Moore (read a great profile of him here) was famous for his drawings of pin-up girls in the '40s and '50s, with his work appearing in McCall's and Cosmopolitan, but his main client was Esquire magazine.  Moore was commissioned to create a special calendar for the magazine in 1949.  Below is the June calendar girl: 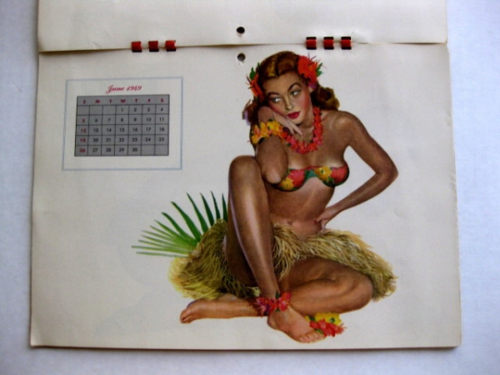 So now we know where The Balm got their Bahama Mama!

Next up we have the work of Peter Driben (1903-1968), possibly the most prolific American pinup artist.  This image appeared on the November 1946 cover of Titter magazine.  Yes, you read that correctly.   "America's Merriest Magazine," indeed! 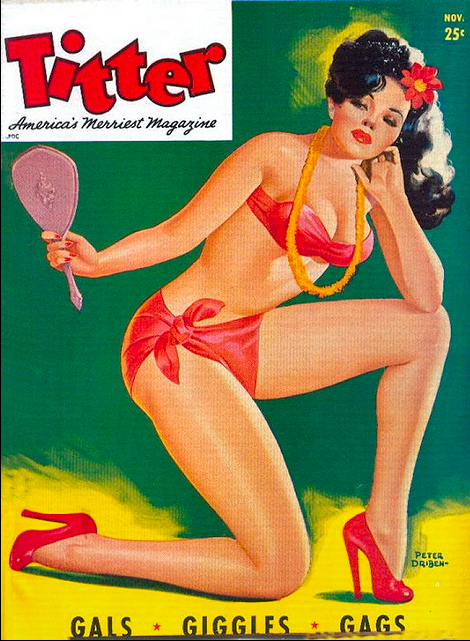 It looks The Balm replaced the mirror with a maraca in the packaging for Hot Mama, which is puzzling.  But what I had been really wondering about all these years is how The Balm, and Too-Faced, for that matter, had been able to get approval for these images for commercial use.   According to my cursory research, they didn't have to.  Apparently once a copyright expires on an image they are considered to be part of the public domain, so anyone can use them for anything they wish.  This is probably common knowledge but I had no idea until now.  I can only assume that these images were in the public domain (i.e., the copyright on them had long expired and was not renewed) and so were able to be used freely on these products.  However, it would have been nice to see some acknowledgement of the original artist on the packaging somewhere.

In any case, I tried to find the images for Down Boy and Cabana Boy but to no avail.  However, my searches did turn up quite a few original illustrations for many of Too-Faced's Quickie Chronicles, so perhaps another post comparing those palettes and their original artwork is in the making.  ;)  Stay tuned!

p.s. This is quite a timely post, as The Balm is once again on Hautelook today.