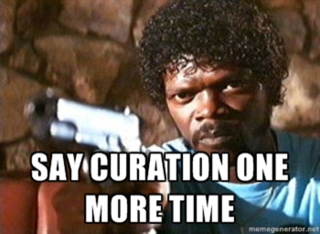 "I dare you, I double dare you motherf*cker! Say curation one more goddammed time!"

Today I want to talk about curating and whether a beauty museum could have a curator in the traditional sense of the word.

The definition of curating has significantly shifted in recent years.  Curating in the digital age takes on a vastly different meaning than that of one whose job it is to look after objects and arrange exhibitions exclusively in art museums and galleries.  Nowadays it seems that everyone's a curator.  From boutique owners to DJs to bloggers, curating has become synonymous with selecting or aggregating.  There are even guides on how to curate web content.   As the volume of information available online grew exponentially, there came the rise are self-appointed "curators" of websites and blogs who edit and select content for their readers.  And as retailers struggle to compete, many of them turn to using "curated" to describe their selected merchandise.

Is there a problem with this?  For some, particularly those who have been bona fide curators in the art world, yes.  The backlash against the use of "curation" outside of an art context has been steadily growing.  "You're not a curator, you're actually just a filthy blogger" is the title of an article by Awl editor Choire Sicha. According to Sicha, the use of the term is "a way for bloggers to distance themselves from the dirty blogging masses."  He adds:  "You are no different from some teen in Indiana with a LiveJournal about cutting. Sorry folks! You're in this nasty fray with the rest of us...you're a low-grade collector, not a curator...you're nothing but a secondary market for someone else's work."  Indeed, Pete Martin, an author at the now-defunct arts journal New Curator rails, "You are, at best, a filter. You may make a name for yourself by excelling at some kind of selection process, but you are not a curator." And:  "You should not equate yourself to an art exhibition curator just because you have a Pinterest account," writes Alex Ahn, co-founder of NYC art gallery Temp.  As for the retail side, in an article for Macleans, vice-president of exhibitions and marketing at the Royal Ontario Museum Kelvin Browne stated: “The concept of ‘curating’ your life is just an excuse for high-end consumption...It’s pretending that buying stuff and putting it together is meaningful, but it’s not.”  Back to Martin, who goes so far as to claim that "anyone calling themselves a 'curator' when it is clear that they are dealing in merchandise should have their thumbs removed."  Yikes.

Given all of this, how wrong is it that I refer to myself as a "curator"?  To clarify, I have never once meant the term to be serious as it applies to me.  I mean it purely tongue-in-cheek, as a playful homage to real museum curators, who are what I aspire to be.  In the "About the Curator" section I give myself a fancy faux title that uses the name of the founder of one of my favorite makeup lines - I'm just making a joke about the notion of endowed curatorships.  Whenever I discuss curating an exhibition or myself as a curator, I hope it's clear that I'm kidding.  I don't think I could be considered a real curator for a number of reasons.  One is that I don't have formal training in the field.  There are no official scholarly programs in cosmetics history, and while I'm flirting with the idea of going back to school for a degree in curatorial studies (this program is particularly tempting), I'm merely another self-proclaimed expert on the subject of makeup.  Second, the fact that the Museum resides solely online and in blog form means that I am, indeed, just a "filthy blogger".  Finally, it's...makeup.  The items are not necessarily original or valuable, which is quite different than the one-of-a-kind objects a curator normally takes care of.  (Of course, I still maintain that makeup belongs in a museum - see my very first MM Musings to read more about that topic.)

However, some believe that the two concepts of curating - the long-established, art museum meaning and the newer, social media-based approach - can peacefully co-exist, and that the democratization of the term is a good thing.  "Ultimately, I think it’s fantastic for museums that museum words are making their way into the vernacular–it has the potential to give more familiarity to art museums for people who aren’t walking through galleries every day, which is of course a great thing," writes Chelsea Emelie Kelly, Manager of Digital Learning at the Milwaukee Art Museum.  Online arts magazine Hyperallergic covered a panel at MoMA on the topic of curation and concludes, "It would be easy to argue that the significance and power of the museum curator has been undermined by the overuse of the word, but in reality it’s more true that the application of 'curating' to other disciplines has encouraged everyone to be more mindful of just what material they choose to pass on to their audiences, whatever the size or sector."

So...while I have officially disavowed myself of the notion that I'm a real curator, there are some signs that point to the contrary.  Since "curate" comes from the Latin "curare" meaning to "care for", I might, just might, be able to pass as a curator.  After all, I do lovingly care for all of the objects in the collection and oversee their preservation.    In an interview for NPR, George Shackelford, the deputy director of the Kimball Art Museum in Fort Worth, Texas, says that curators "take responsibility for things...not just 'like' them."  Secondly, while I don't have a formal degree in either curatorial studies or cosmetics history (the latter doesn't even exist), I'm just about as qualified as anyone else to run a beauty museum.  I've worked for several major museums, have degrees in art history and cultural studies, and have been an avid user of makeup for over 20 years.   Third,
I manage all of the museum's activities, from writing the exhibition labels to overseeing communications to organizing the collection.  The ability to be involved in almost all aspects of museum administration is the hallmark of the modern curator.  "They don’t simply organize exhibitions, they also have a hand in fund-raising and public relations, catalog production and installation," notes a 2010 New York Times article.  This article also quotes a young curator from the Whitney Museum of American Art, who states, "The old-fashioned notion of a curator was that of a connoisseur who made discoveries and attributions...a lot of that work has already been done. The younger generation is trained to think differently, to think more about ideas.”

Finally, I arrange exhibitions.  Now they might just be in my home and limited design-wise because of the space, but I do try to create an experience of some kind, something more meaningful and eye-opening than the objects would be if they were presented individually.  This is also part and parcel of what modern curators do. According to Serpentine Gallery director Hans Ulrich Obrist, curating exhibitions today is much different.  "Before 1800, few people went to exhibitions.  Now hundreds of millions of people visit them every year.  It's a mass medium and a ritual. The curator sets it up so that it becomes an extraordinary experience and not just illustrations or spatialised books," he writes in an article for the Guardian.  He adds, "Exhibitions need not only take place in galleries, need not only involve displaying objects. Art can appear where we expect it least."  I find these last two sentences to be particularly inspiring.  If that's true, then perhaps I can consider myself a curator of sorts.

To conclude:  I'm still not sure whether I'm a curator.  My hunch is that most museum professionals would declare me an impostor, and I would be inclined to agree.  But with all the new ideas surrounding curation today, it's plausible that the term used to best describe what I do could be curating.

If you made it this far, what do you think?  Do you think managing this blog is, in fact, curating?  How about if the Museum was a designated nonprofit and occupied a public, brick-and-mortar space?