A while ago I received an email from a woman whose son was playing in an abandoned lot and managed to find an old lipstick tube.  What was remarkable about it, she noted, is that it was double-ended.  She asked if I could identify it and see if it was worth anything.  Fortunately I was able to find some information and correctly identify it, although it wasn't too difficult as the brand name of Tussy was etched on one end. 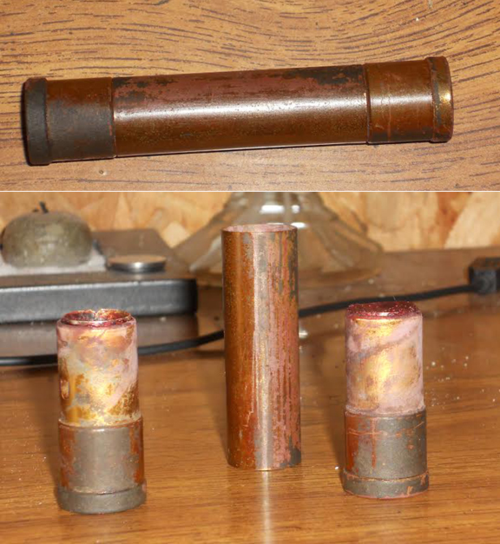 Tussy was originally owned by perfume and skincare purveyor J. Lesquendieu, which in turn was owned by Lehn & Fink starting in 1929: "Lehn & Fink, a New York based pharmaceutical company established in 1875, was mainly known for household products such as Lysol disinfectant and Pebeco toothpowder. After their purchase of Dorothy Gray, they went on to acquire Lesquendieu (which included Tussy) in 1929." 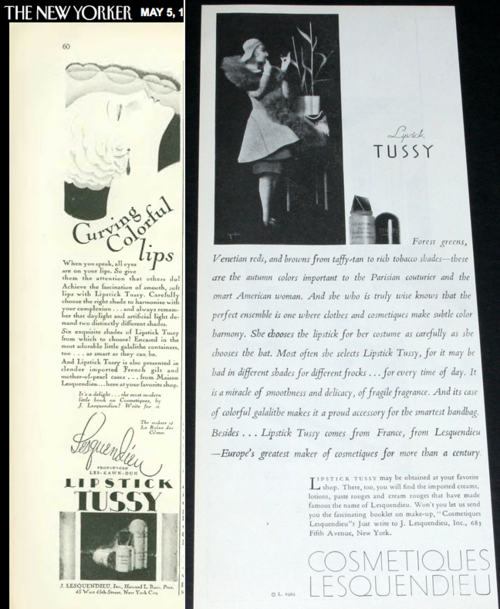 (images from archives.newyorker.com and ebay.com)

When I was trying to guess the approximate date of this two-sided lipstick I obviously found Tussy ads to be very helpful.  I knew it wasn't any earlier than 1940, but then I was also able to rule out 1941 through 1947 by comparing the tube in the pictures sent to me to the ones in the ads. 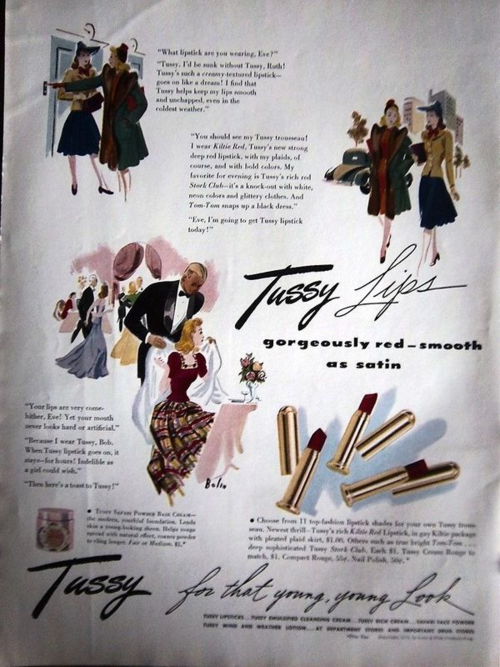 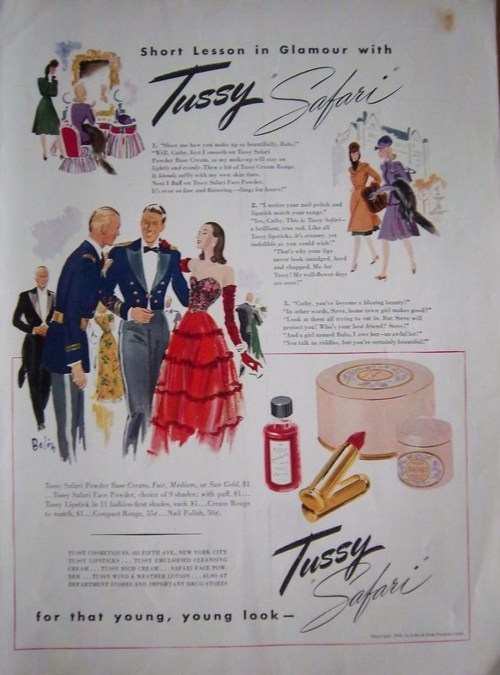 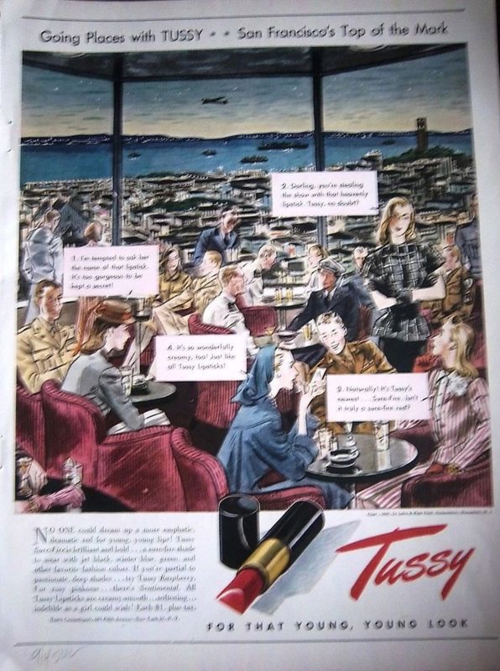 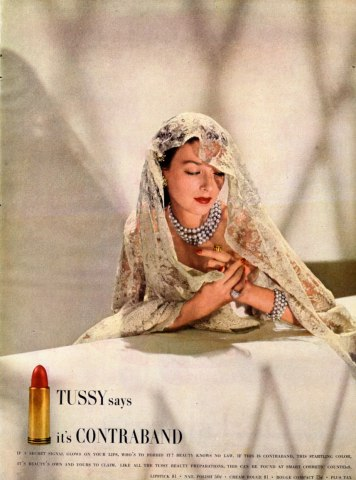 By summer of 1948 Tussy Two in One lipsticks had made their debut, as evidenced by these newspaper ads.  Oddly enough I didn't come across any full-sized color magazine ads for these two-in-ones.  These are from May 27, 1948 and June 17, 1948, respectively.

Here's another ad from 1949 that better shows the lipstick and available shades. 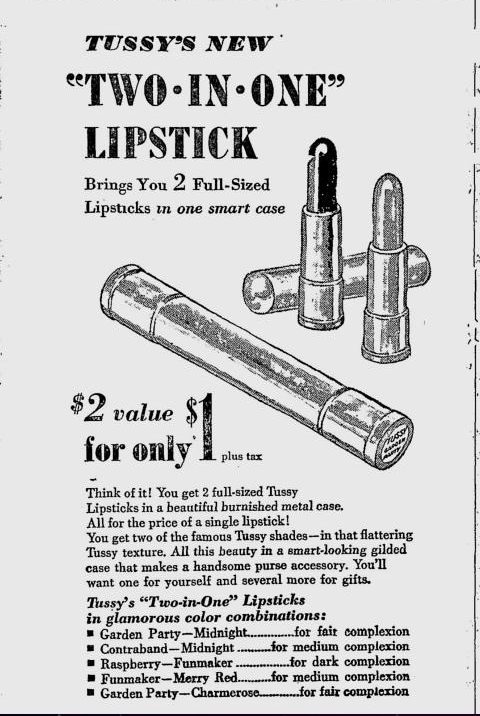 And here's what one looks like in mint condition: For the holiday season in 1949, Tussy expanded on the double-ended product theme and devised a lipstick and perfume tube, combining their Optimiste perfume with their lipstick of the same name. 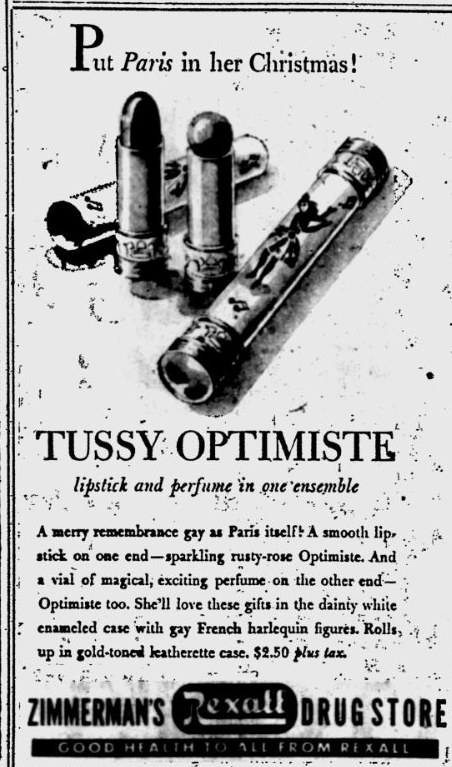 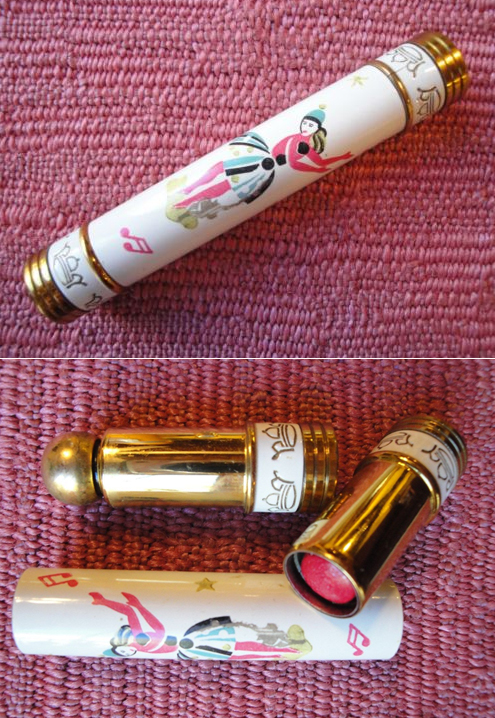 They repeated the perfume/lipstick combination in late 1952 with their Midnight perfume and lipstick.

Interestingly, Dorothy Gray, also owned by Lehn & Fink at this point, released a similar product in 1952 with their Golden Orchid perfume on one end and a lipstick on the other, which was available in four shades. 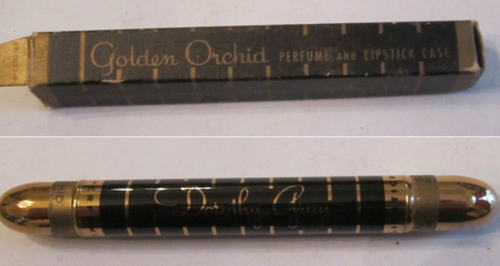 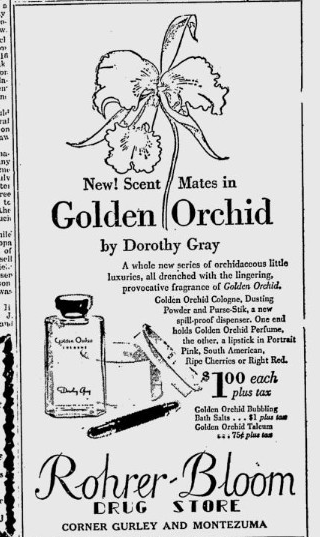 Also in 1952, Elizabeth Arden jumped on the double-ended lipstick bandwagon with their "color-over-color" lipstick combinations.

Tussy was not the first to come up with double-ended products.  Two-sided perfume cases were quite popular in the late 19th and early 20th century, and in the 1920s a company named Ripley & Gowen came up with a "tango" compact (a compact with a lipstick or perfume case attached by a chain) that had a double-ended tube containing lipstick on one end and brow pencil on the other. 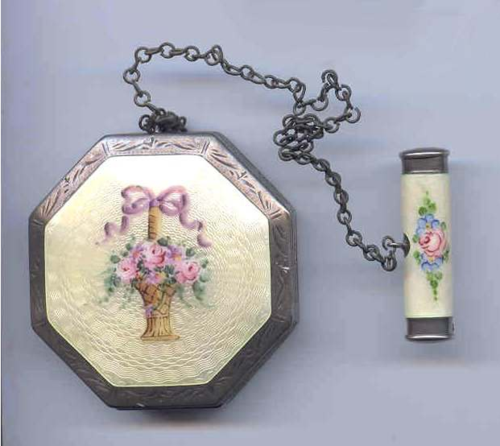 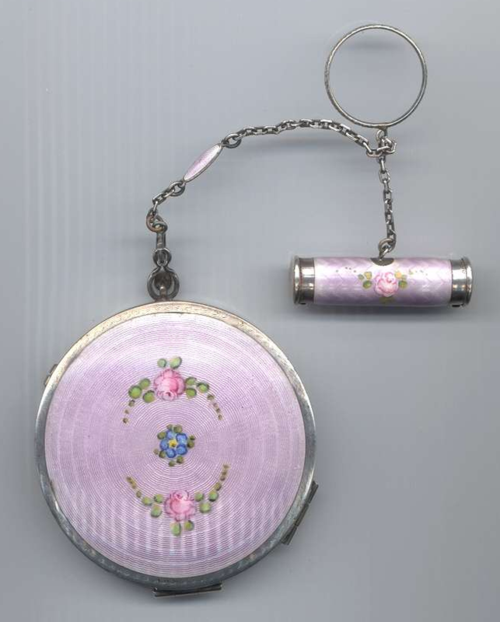 Brow pencil appears to be an odd choice, but I'm assuming that in order to the maintain the thin, straight brows that were in style in the 20s brow pencil was a necessity - perhaps so important that R & G saw it appropriate to make it the other item besides lipstick in a two-sided case.  While others had produced double-sided products, to my knowledge Tussy was among the first companies to come up with a double-ended lipstick.  And their interest in two-sided products didn't end in the late 40s, as evidenced by their "Flipsticks" that were introduced in 1962: 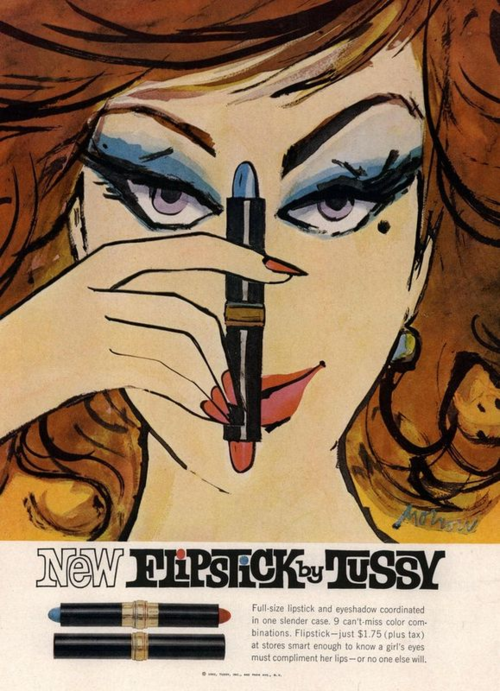 With the plethora of double-ended beauty items nowadays, I think it's safe to say that Tussy was a pioneer in helping to make them a commonplace product rather than a novelty.  Getting back to the original lipstick that was submitted, I can't say it's worth very much given the condition, but it's still interesting from a beauty history perspective.  If I found it I would definitely hang onto it.

Do you use double-ended products?  I don't because I like to store everything vertically rather than horizontally and it drives me crazy that I can't see both ends!