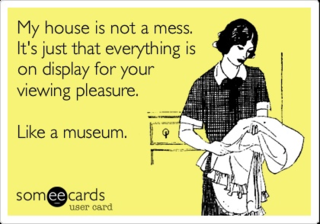 One of the issues that's foremost in my mind is finding a suitable location for the Makeup Museum, as I only have so much room at home.  While I'm still nowhere near establishing a physical space for it, I love brainstorming possible places.  There are plenty of galleries and other smaller venues where I might be able to do a temporary exhibition, but securing a permanent space is trickier.  Ideally I'd have it in my adopted hometown of Baltimore.  B'more is known for its quirkiness so I think a Makeup Museum would be a perfect fit.  I've narrowed it down to several possible areas:  Mt. Vernon (my hood, which would be very convenient for me and is also home of the Walters Art Museum), near the Inner Harbor (lots of tourist traffic), or somewhere in Station North.  But rather than starting from scratch and renting or buying a stand-alone space, tacking on the museum to an existing one may be another avenue to consider.  It may be easier to get funding for space for a new collection that will be attached to an already-established institution, plus since there are visitors I wouldn't necessarily have to lure them away to a whole different location - they're already in a museum they wanted to see, so why not stop by a little makeup-themed addition tucked away in the building?

In terms of these existing museums, I don't think it would jive well with the collections at either the Baltimore Museum of Art or the Walters (which is a shame as I live a block away from the latter.)  However, I do see it possibly fitting into the American Visionary Art Museum, an institution that features "outsider" art and non-traditional art genres - work by prison inmates, exhibitions devoted to themes like "What makes us smile?", etc.   A gallery devoted to cosmetics may be right at home there.

Finally, I was quite inspired by this post at Museum of the Future in which the author suggests alternative museum locations.  It got me thinking that the Makeup Museum doesn't necessarily need to be housed in a traditional stand-alone space or as an afterthought to an existing museum.  While it's already in a unconventional space (my home), it's obviously not available for the public to see in person, so it has to be accessible.  Some of the venues the author came up with include train stations and airports, but I was most taken with the idea of having the collection, or at least an exhibition, on view in a mall or store.  In fact, this notion has already happened in the form of Keiichi Tanaami's installation at Sephora.  Could you imagine walking into a store and seeing an exhibition, similar to the ones I "curate", and then also be able to buy some of the collectibles you saw on display?  Another possibility is also one that's been done with success - have an exhibition at a makeup expo, like the Makeup in New York show I visited back in September, or the Makeup Show LA's upcoming exhibition on Kevyn Aucoin.

I'm not sure how I would even begin to approach people at these various places, especially since it would be a most unusual conversation and I'm not particularly adept at networking (or at any human interaction, really).  Any suggestions are highly welcome.

Would you rather see the Makeup Museum in a space by itself, as part of another museum or in another venue altogether (like Sephora or a department store?)