Vintage ad round-up: not quite all there

Oftentimes I'll be researching a topic for a blog post and stumble across something else entirely that leads me to concoct a new blog post.  This was the case with today's round-up of vintage ads which feature some form of disembodiment.  (In case you're wondering, this idea came up as I was scouring ads for my previous post on cultural appropriation in cosmetics ads.)

It's common nowadays to see close-ups of models' faces or heads or any other body part by itself to advertise a new beauty product.  However, these images never strike me as odd or somehow detached from the rest of their bodies, whereas with some vintage ads I got a decidedly eerie, surreal impression.

Let's take a look at these ads, starting with lips. 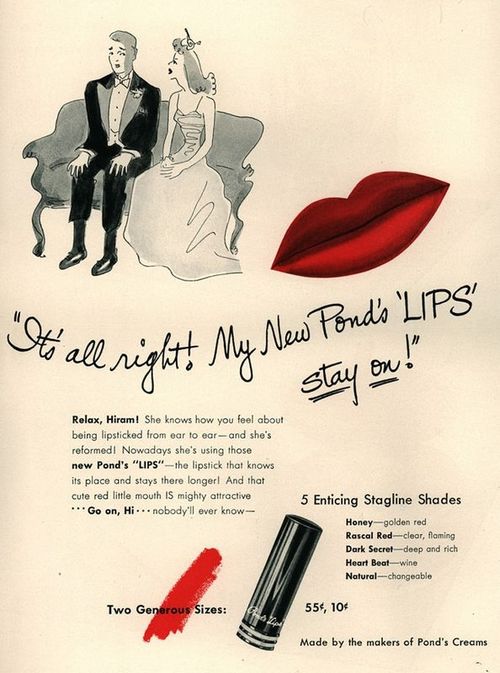 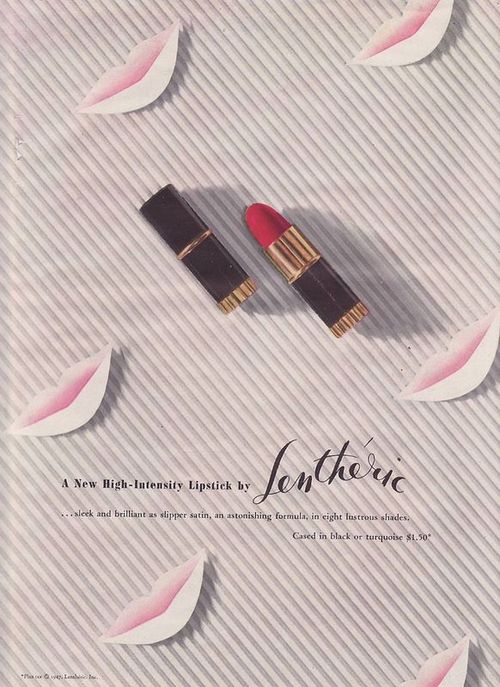 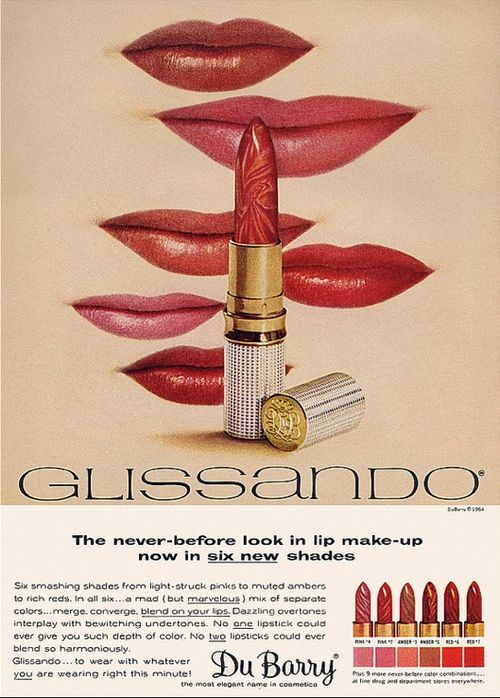 In the case of Max Factor and Du Barry, I can sort of see the use of lips by themselves in order to showcase the various shades that the lipsticks come in, but they're still markedly different than what we see today.  The other two ads for Pond's and Letheric are downright strange - in the case of Pond's, a pair of lips is just floating on the right side, while in Letheric multiple pairs of lips are patterned diagnonally across the ad, almost like wallpaper.

Next up we have hands - or rather, ads for nail polish.

Some of these by the better, more skilled fashion illustrators aren't so creepy, like these Dior and Elizabeth Arden ads from 1957. 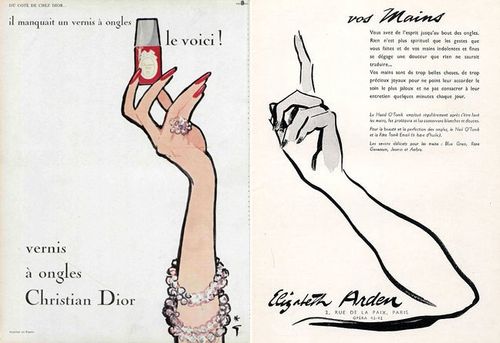 But in most other vintage nail polish ads, the hands seem to be severed at the wrist.

Or in the case of the Peggy Sage ad on the right, emerging from a mysterious opening within the ad: 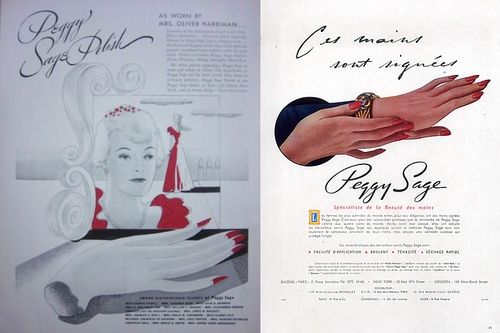 (images from ebay.com and hprints.com)

In the case of Guerlain, an assortment of white, ghostly hands float against a charcoal background, almost like they're made of smoke.  Interestingly, the company is using disembodied hands rather than lips for a lipstick ad (although they did go that route as well for their original Rouge Automatique circa 1936.) 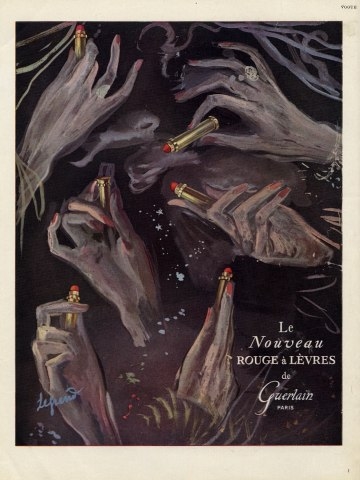 Here's where things get really weird.  Dura-Gloss depicts not only bodiless hands but ones growing out of the center of a flower (1945 and 1951): 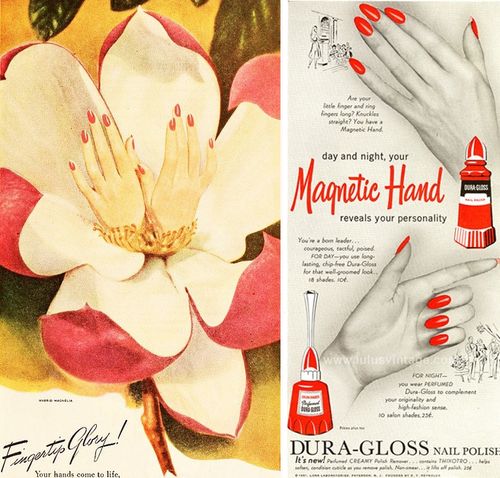 (images from pinterest.com and Found in Mom's Basement)

Then we have the ATTACK OF THE GIANT HANDS!  They're coming after planes and puppeteering women from above.  Not only are the hands/fingers coming out of nowhere, they're in a clearly disproportionate scale to everything else in the ad.  I understand the need to highlight the product that's being sold, but why do it in such a strange way? 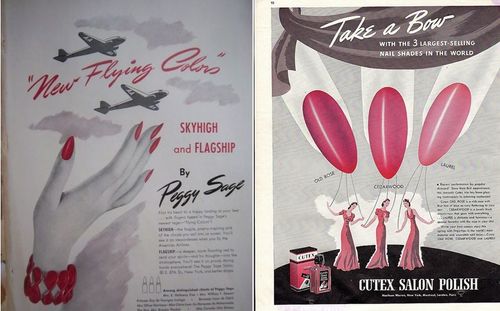 (images from ebay.com and hellcat-vintage.com)

And sometimes we a get twofer:  an ad that has both disembodied hands and lips, as in these ads by Mary Dunhill (1946) and Lancome (1955): 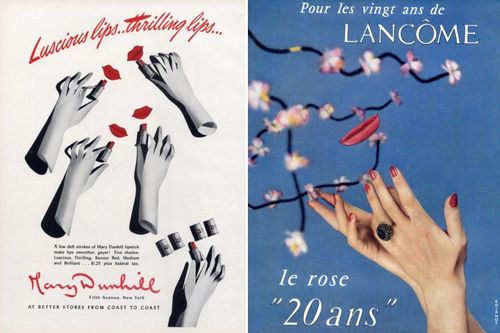 Finally, we have some decapitation.  A single head drifts in an undefined space or several smaller heads are scattered across the ad. 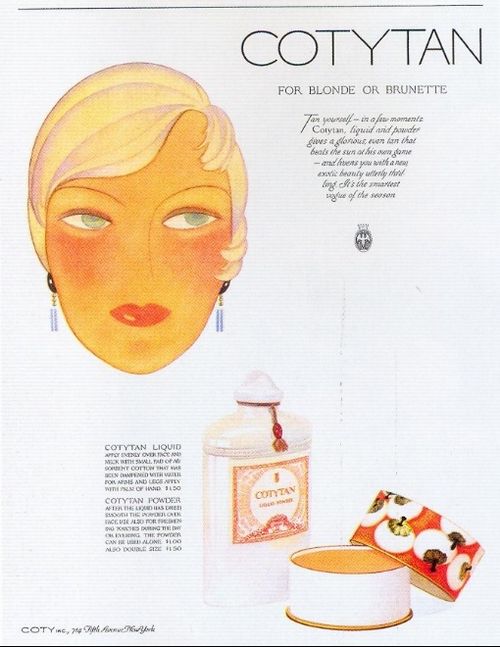 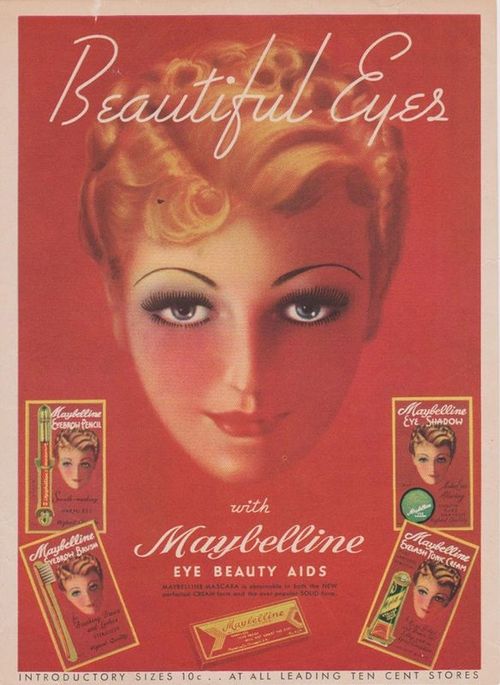 And as we saw with lips and hands, we have twofers here as well, except in this case it's disembodied heads and hands.  The ad for Naylon nail polish (1948) on the right is one I find to be especially disturbing - given the pin on the lower right and the envelope on the lower left, is this supposed to be a bulletin board with the woman's head trapped in some sort of sheet that's pinned to it? 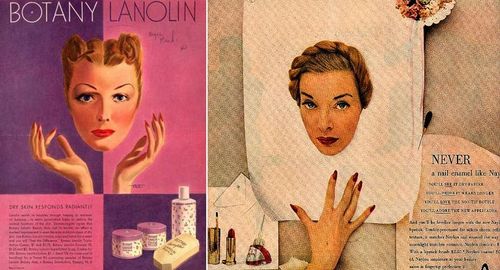 (images from vintageadbrowser.com and etsy.com)

This 1943 photo by John Rawlings for Vogue is fairly unnerving as well. 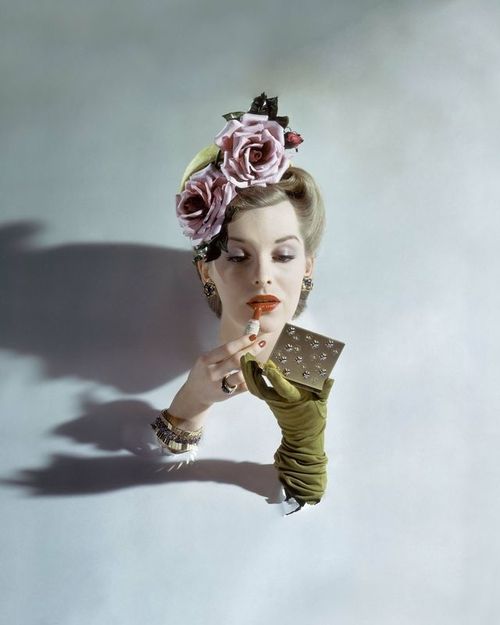 So what does all this mean?  We see disembodiment in contemporary ads, and many argue that it objectifies and dehumanizes women.  So are these vintage ads relentlessly sexist as well?  Many of them appear long before feminism's second wave, and thus also before most women were able to hold a position of authority in many fields, including advertising, so the argument could be made that male ad executives simply reduced women to their parts to sell beauty products.

However, I do think there's a big difference between today's images and these vintage ads.  I think the impact of surrealism was more far-reaching than we recognize.  For example, here we have a 1931 Guerlain lipstick ad showing a floating, upside-down woman's head.  This would seem creepy...if we didn't consider that the illustrator, Jacques Darcy, was most likely referencing Surrealist artist Man Ray. 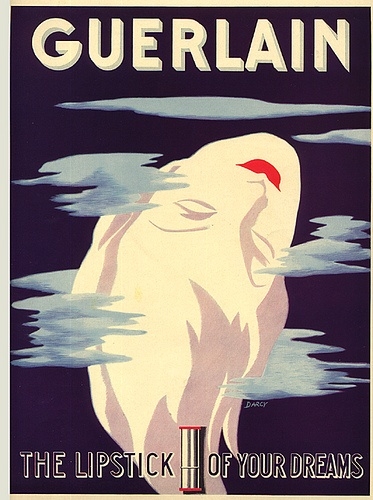 As the author of Vintage Powder Room points out, the image is strikingly similar to Man Ray's photograph of Elizabeth "Lee" Miller from 1930. Coupled with the tag line, "The lipstick of your dreams", this image shows a strong surrealist bend, as the surrealists were fascinated with the subconcious mind and dreams especially.  And could Man Ray's Observatory Time:  The Lovers (c. 1931) be partially responsible for all the floating pairs of lips we see in advertising over the next 2 decades? 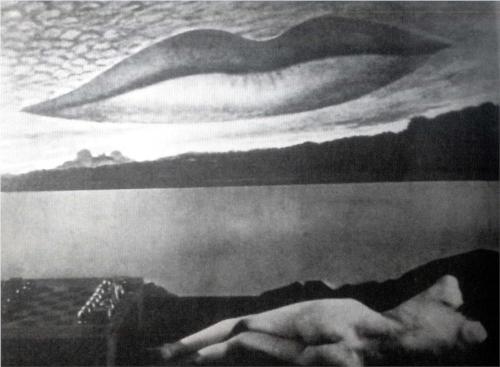 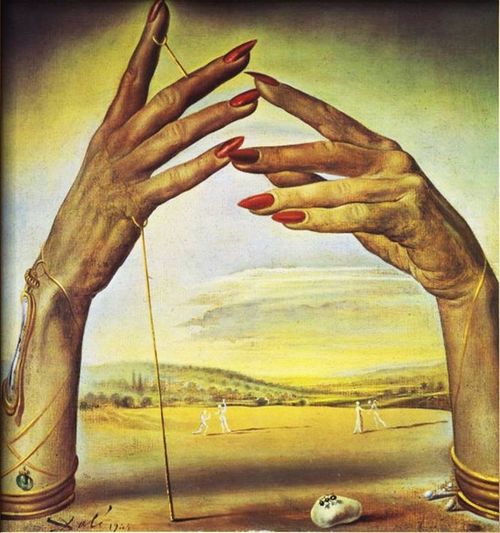 (images from pleasurephotoroom.wordpress.com and pinterest.com)

As for heads, there is a parallel between the floating, antiquity-inspired busts of some surrealists and the ones used in some Lancôme ads...perhaps this connection is the inspiration for the other disembodied heads we've seen. 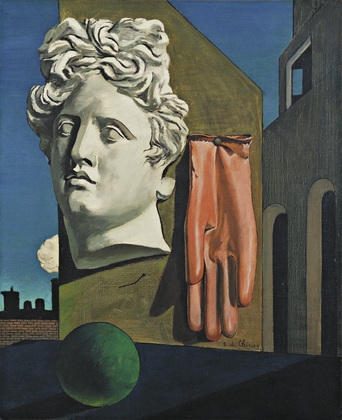 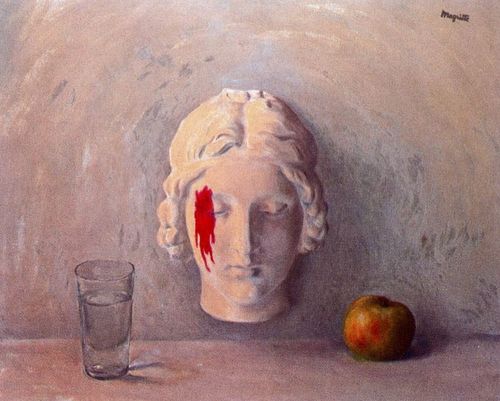 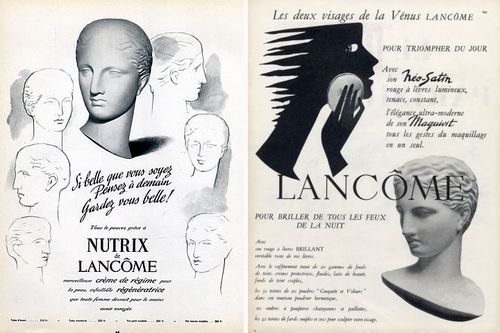 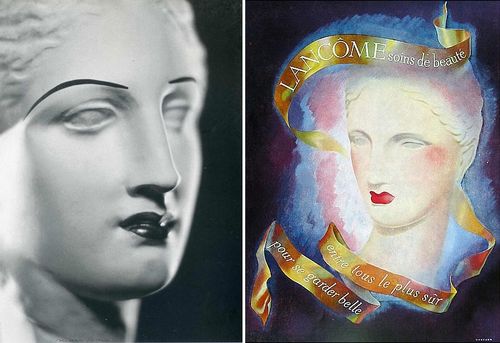 (images from pinterest.com and paperpursuits.com)

I'm pondering whether the surrealist interest in antiquity carried over into using comparable images in makeup ads.  Of course, there are differences - Lancôme's ads obviously center on Venus, goddess of beauty, while the surrealists generally didn't specify which god/goddess they were referencing. But it's still an interesting theory.

In conclusion, it's my opinion that these vintage ads aren't actually misogynist, but came about as a result of a heavy surrealist influence, a movement that was rooted in the early 20th century, but still pervasive through the early '60s.  And even today we see uncannily similar ads, ads that don't necessarily sexualize and objectify women through disembodiment but rather give off a surrealist energy.  This 2012 video for Lancôme's Rouge in Love was described as "a surrealist take on a typical cosmetics ad — disembodied lips sing along to the words of the song and apply the new lipsticks to their floating pouts while the Eiffel Tower and Times Square loom in the background."

We also saw it earlier today in Stila's holiday palettes - lips and eyes looming across the front of the "canvas" the Stila girl is painting.

What do you think about these vintage ads?  Were they at least partially feeling the effects of surrealism?  Or was it that these types of illustrations just happened to be the most popular stylistically for cosmetic ads at the time?