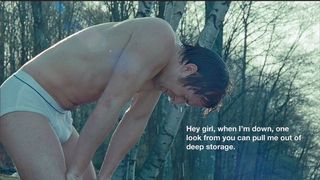 Taking into account the storage issues I discussed in the last installment of MM Musings, today's post will focus on the recent notion of "visual" storage, in which some or most of a museum's stored pieces are accessible to visitors, and how this concept could be applied to the Makeup Museum. Typically, only about 5%-10% of a museum's entire collection is on display at any given time.  (This is certainly true of the Makeup Museum as well.)  Visual storage allows visitors to see much more of the collection, and without being directed to follow a certain path the way they would in an official exhibition.  Several museums have adopted this practice, including the Brooklyn Museum, the Clyfford Still Museum, LACMA and the Met.

Visible storage allows museums to "democratize" their collection by moving previously unseen items out in the open and making them available to the public.  In this way curatorial and director opinions about what should be displayed are somewhat overruled.  Says art blogger Lindsey Davis, "If the works aren’t being used in a particular themed gallery, that doesn’t mean your visitors should be kept from them, especially since it’s just museum management’s decision to hide them away."  Additionally, it's beneficial for museums to offer visible storage to provide a more transparent, open relationship with their audience instead of having visitors believe museums are "hoarding objects in a dark room", as LACMA Director Michael Govan puts it.  Adds Joanne Heyler, director and chief curator of the Broad Museum, "How in a building can we make it clear to visitors that storage and conservation are a core part of the museum's function?"  In this way visitors get a glimpse of how objects are stored and can understand that they are not actually shoved haphazardly in a dark basement, which might foster a better sense of trust in the institution - helpful for securing those all-important donations. 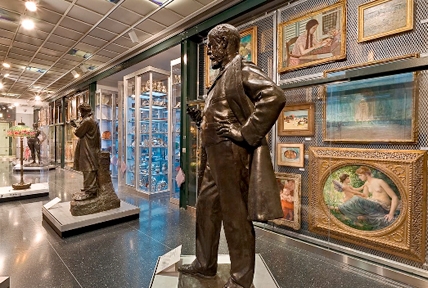 But why is visible storage also popular with visitors?  It goes back to the idea of democratization - people can look at objects that speak to them, rather than being told what pieces they "should" be looking at.  There's a freedom in exploring visible storage that's somewhat lacking in a curated exhibition.  "One of the major appeals of the visual storage concept, [LA Times reporter Jori] Finkel suggests, is its open-ended, choose-your-own-adventure style of presentation, which allows visitors to seek out objects they find interesting and compelling with relatively little curatorial direction, which she likens to the process of searching for images online. 'What we’ve found is that people love visible storage,' [Brooklyn Museum Director] Arnold Lehman said. 'They feel like they’re on their own, not as directed as they would be in galleries, and they get to discover things. It’s like a treasure hunt.'"  In other words, it functions quite similarly to the Internet (or perhaps more closely, Pinterest) where one can freely wade through hundreds of thousands of images and select those that appeal to them.

Indeed, this fits the experience of  Hoarded Ordinaries author Lorianne DiSabato, who shared her thoughts on stumbling across the visible storage section at the Met.   "Had I but world enough and time—had my feet not been aching from an entire day of Museum-rambles—I could have easily spent hours looking at this stunning array of objects—an embarrassment of riches—with only curiosity rather than curatorial captions to guide me. Without the narrative storyline of an curated exhibit to tell viewers what they 'should' get out of these objects, museum goers are left to sift through the troves on their own, picking and choosing their own masterpieces from the aisles."

The above pictures from the Met, I think, are similar to what the Makeup Museum's visible storage would look like if there was a public location.  There's no question that I would have visible storage; the only reason I don't keep more things out on display currently is lack of space!  I would love for visitors to see all the wonderful objects in the collection outside of permanent or special exhibitions.  Visible storage, where items tend to be stored more closely together than in the regular galleries, would be especially appealing to cosmetics junkies.  "Haul" and "stash" pictures are quite popular in the makeup world (as of this morning, googling "makeup haul pic" yielded 8,440,000 results!), and the visible storage in the Makeup Museum would resemble these photos in that it would feature large groups of makeup items in individual cases, organized either by brand or by type (similar to what I do for my "group portraits" but with labels.)  Basically, it would much more aesthetically pleasing than the current storage situation, which is dire.

What do you think of visible storage in general?  And would you like it if the Makeup Museum offered it?