Sephora is, I believe, my favorite store ever.  I was pleased to see them celebrating their 15th anniversary earlier this summer.  So I was mystified as to how I completely overlooked a great collaboration with Japanese artist Keiichi Tanaami in honor of this milestone. 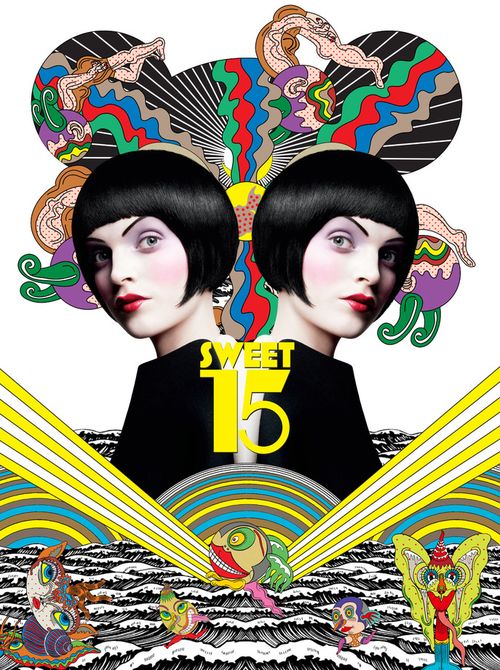 Keiichi Tanaami (b. 1936) studied at Musashino Art School.  In 1968 he visited the U.S. for the first time and made the acquaintance of an artist who would greatly influence him:  Andy Warhol.  Most of his work was for advertising and record covers.  In 1975 he became the art director of Playboy in Japan, where he revolutionized the large-format magazine.  Hallucinogenic images of odd creatures and use of vibrant color served as the hallmarks of his work and were derived from a variety of sources, including his childhood in Japan and American pop culture.  He recalls in an interview, "Japan went to war with the US when I was about seven. During those years no one had the time, the luxury, or the interest in cultural activities. So I don’t remember being taken to museums and there weren’t many books being published. It was a time of crisis, war time, not the time to enjoy culture. In that sense, my core influence is the comic books I enjoyed as a kid, because there was nothing else...I went through various styles, depending on what I was interested at the moment, my past styles simply mark my changing interests. Still, I came to embrace the pop-induced style, I work with now, later in my career. Earlier, I played with more abstract, simplified forms of expression. I remember being shocked by my visit to the US in the 60s, not only by Warhol and American Pop Art, but also by Robert Crumb, the comics, the whole sub-cultural scene. I found the latter much more interesting than the so-called Fine Art and was deeply affected by it. In the end I decided to follow my original affection towards sub-culture and Pop."

Tanaami's strange images were further fueled by a bout of pleurisy in 1981.  While hospitalized, he had a high fever and experienced vivid hallucinations from the drugs used to treat him.  "I saw some surreal images, which I couldn’t understand if it was a dream or a hallucination - they were projected on a white wall in the room. At the same time, a crooked pine tree outside the window was growing up in the sky, just like the painting from Dali...I wrote all these down on 8 notebooks in the end, and from these, many ideas and images came up."  This prolific output was captured in exhibitions and several books over the years, including Spiral and Daydream.  Nowadays, at age 77, Tanaami continues to team up with various companies and still does album covers.

Sephora VP Lina Kutsovskaya describes the collaboration thusly:  “Keiichi Tanaami-San is a very important figure in the pop art world and we were honored to be working with him on this animation for Sephora...he was fascinated with the beauty products and how to interpret them for this thematical birthday."  Ultimately, the idea was to instill a celebratory, carnival-like feel within the designs.

In addition to the above graphics, Tanaami came up with 15 creatures for Sephora, each representing a different beauty product.  (I doubt he was the one who named them, however - the monikers definitely sound like the work of someone in Sephora's marketing department.)  These were made available as avatars to members of BeautyTalk, Sephora's online community.  In an interview with Ariella Gogol, Senior Writer at Sephora, Tanaami states that his characters "are inspired by my dreams and memories, by the monster encyclopedia, and by movies and comic stories. They have secrets surrounding their births, and they play together. By combining multiple patterns, I tried to animate Sephora-like elegance, enchantment, glamour, beauty, and eros, but in a tense atmosphere...I created almost all of the characters without any outside influences, with the exception of some patterns that I reworked from a Japanese painter in the Edo period (18th Century). Also I love the cover art of this science fiction book that was popular in the 1920s; I was significantly affected by it. I don’t give names to the characters, but I have considerable feeling for every pattern. They all may be my other self."

I can't tell whether these are cute or creepy...both? 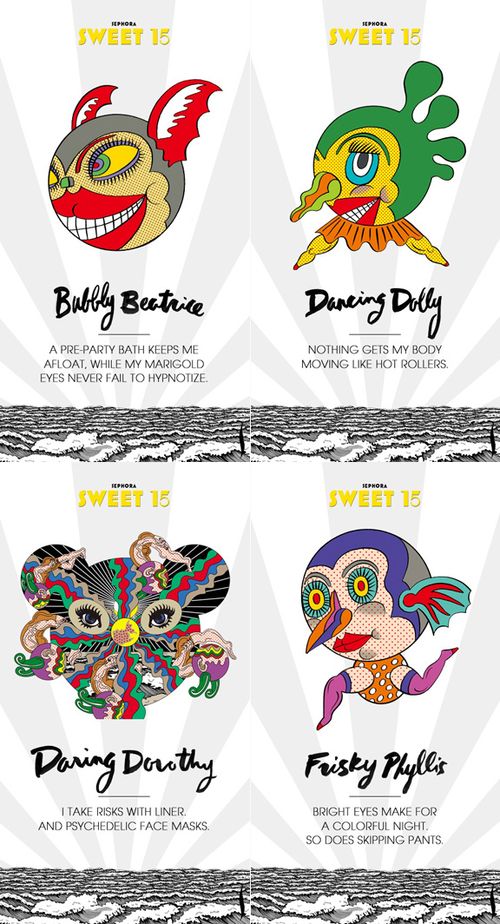 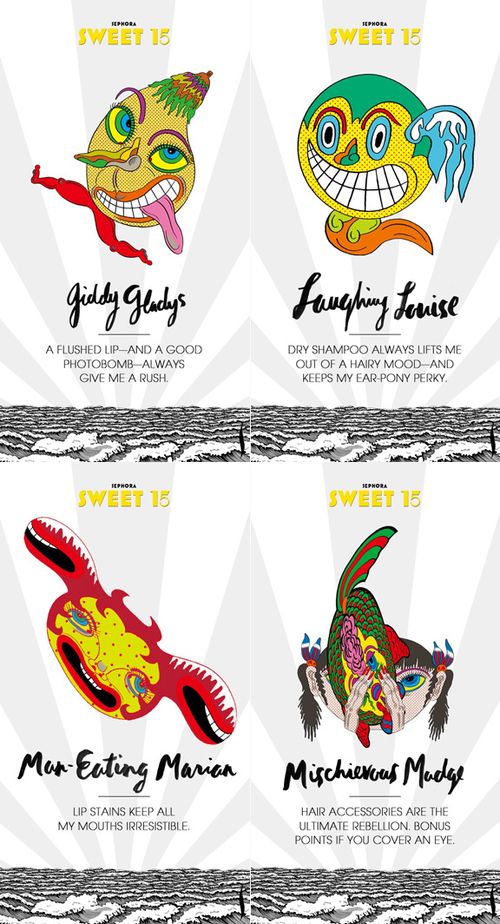 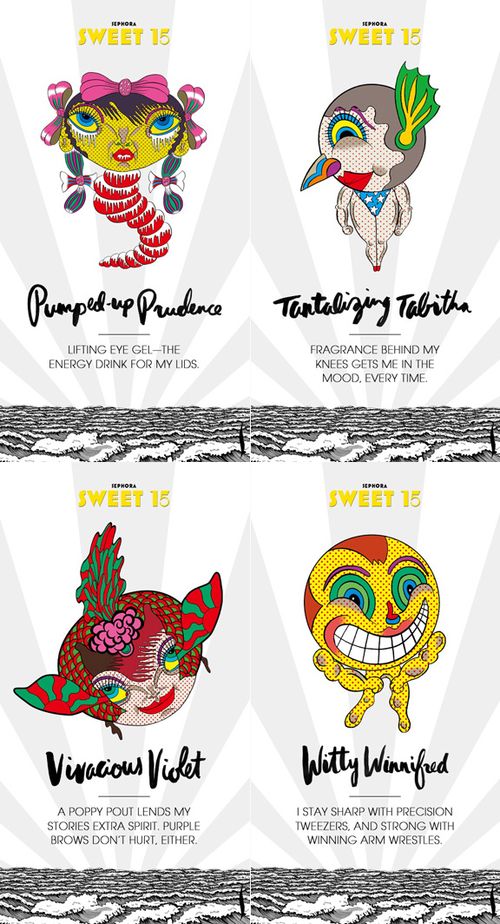 Here are the last three that for some reason didn't get quite the same design treatment as the others.

Even though I find them to be a little scary, I like these monster girls - psychedelic and colorful and incredibly bizarre.  But I think the coup de grace of this collaboration is the gigantic sculpture that was recently placed at Sephora's 9th Avenue location in New York City. 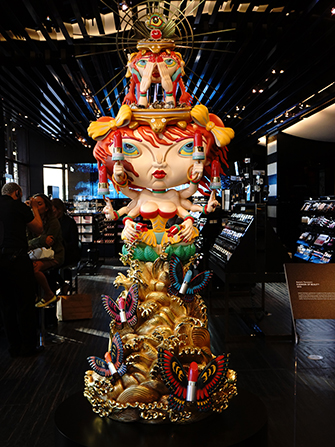 Named the "Kannon of Beauty", the sculpture is influenced by Kannon Bosatsu, or the "God of Mercy" in Japanese Buddhism.  Tanaami explains, "It is said that Kannon Bosatsu has 1,000 arms, extending mercy to 1,000 people. I have chosen to use only six hands, with each functioning as a magical device to enhance beauty."  Additionally, the sculpture ties into the theme of beauty and Tanaami's underlying vision for the collaboration:   "The work is based on the story of a girl living in a monochrome world; she is sucked into a monster’s eye that leads her to fall into the underworld. After her dazzling adventures in the vividly colored alien land, she discovers a castle made of cosmetics. Numerous lipstick-butterflies are astonished at her and start dancing," he says.  Three of these "lipstick butterflies" are perched towards the bottom of the sculpture.  I'm very impressed by how well his work translates into 3D; then again, Tanaami is known for being able to move seamlessly between print, animation, sculpture, photography and film.  (Side note:  I'm wondering what will happen to the sculpture next year when it's taken out of the store...it would make such an excellent piece for the Makeup Museum!)

While normally I don't like it when an artist recycles his or her work for a cosmetics collaboration, I make an exception for Tanaami.  "Gabby Gail" is the same maniacally grinning ball you see at the top of left of this print: 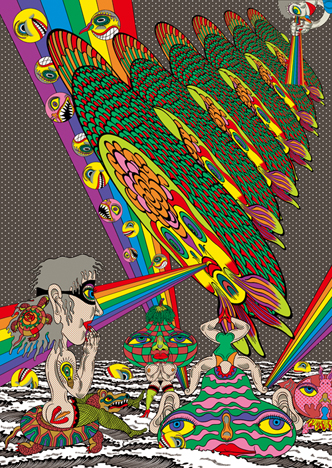 And "Out-There Olga" is the same creature as the dotty, spiky-haired girl seen at the bottom of in CO2 (2009): 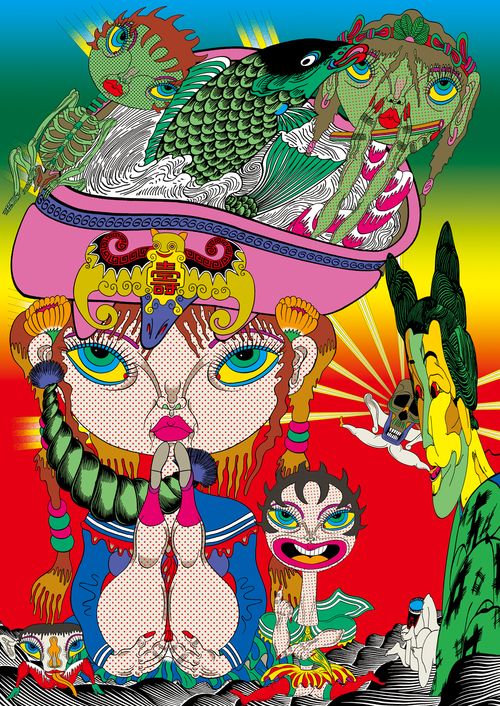 The black and white ocean at the bottom of the Sephora graphics also appear frequently in his work, as in Lost and Wandering Bridge Series 3 (2011): 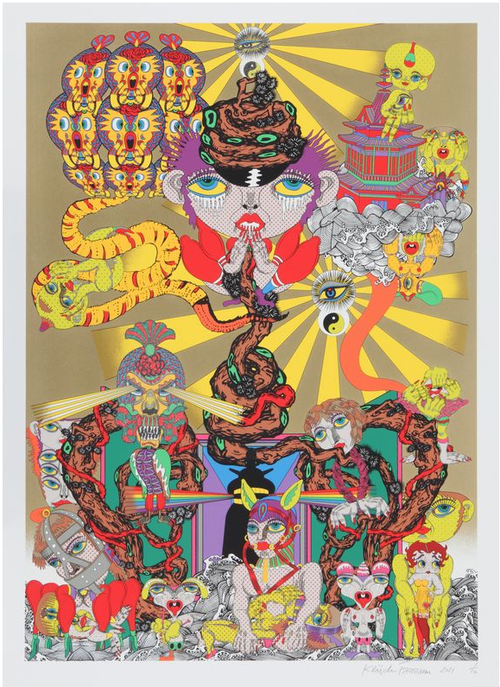 The Sephora sculpture reflects his fascination with Japanese Buddhist statues and is similar to this  2009 sculpture, Kannooon. 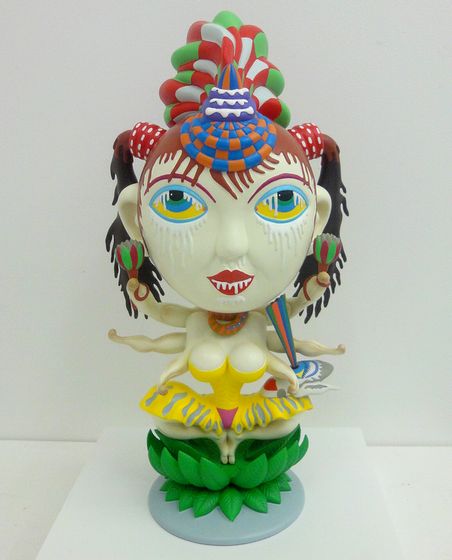 It doesn't bother me that he re-uses the same characters that appeared in previous work.  I feel as though they've been with him for such a long time, it would be odd for him to suddenly come up with brand-new characters just for one collaboration - they're "his" creatures.  They function as a sort of signature and capture his identity as an artist.

Anyway, I really loved this collaboration and I wish there were products available for purchase!  However, I think the lack of sellable products is partially why this collaboration is remarkable.  Companies team up with artists for a limited-edition piece or collection, but I don't think they've ever collaborated just for promotional purposes, i.e. create artwork to celebrate a milestone rather than put it on merchandise to sell.  Plus, Tanaami's work is just so...weird, I can't help but like it.