Links from this week and last, plus a recap of my first marathon.  :)

- If I ever re-do the Sweet Tooth exhibition I'll have to steal this idea of using candy alongside its analogous makeup.

- This Jezebel article on makeup's meaning is sort of bad news for people like me, who enjoy wearing lots of makeup in dramatic shades.  Sorry, but the minimalist bare-faced look just isn't for me.

- I love when '90s nostalgia collides with beauty.  Relive the best 5 beauty scenes from Clueless with XO Vain, and find out what fragrance Mrs. Mia Wallace would wear over at Beauty Blogging Junkie.

And now, I will post a recap of my very first marathon!! 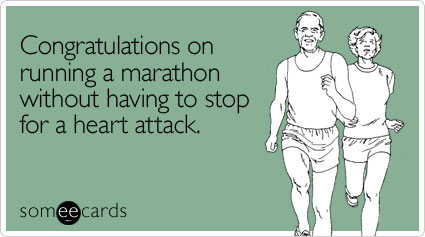 You may remember last year I ran the half marathon at the Baltimore Running Festival and hoping that this year I would be one of the people with the "full" sign on their back.  Many miles later, with a lot of blood and sweat along the way, it happened.  (I do have photographic evidence of the blood and sweat but decided to spare you and not post it.)  Interestingly, I also ended up wearing the same shirt I wore to the half last year. 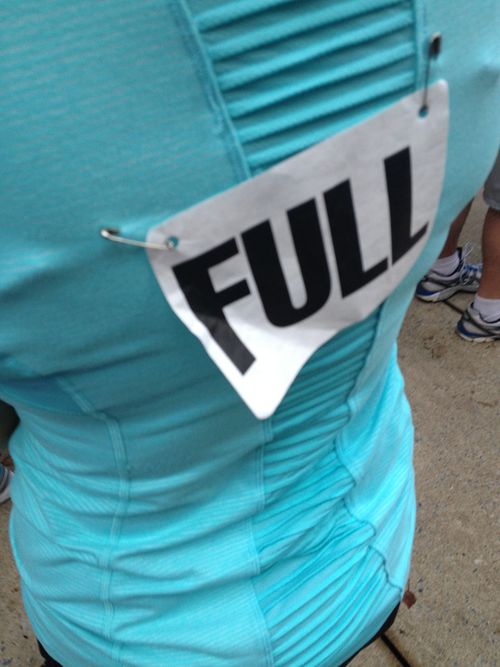 I was so nervous I ended up running faster than I normally do, but I had no idea until I checked the Runkeeper app on my phone around mile 6.  I thought it was wrong and just ignored it.  But when I got to the halfway point I saw the husband (and the great sign he made for me!) and he told me I had in fact been going faster than usual.  I was so happy to see him. 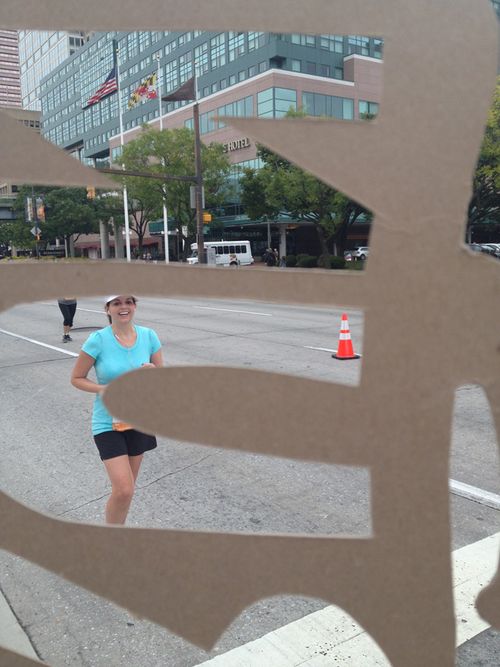 That photo was taken through the sign he made for me - in the shape of Jeero, Museum Advisory Committee member and my official coach. 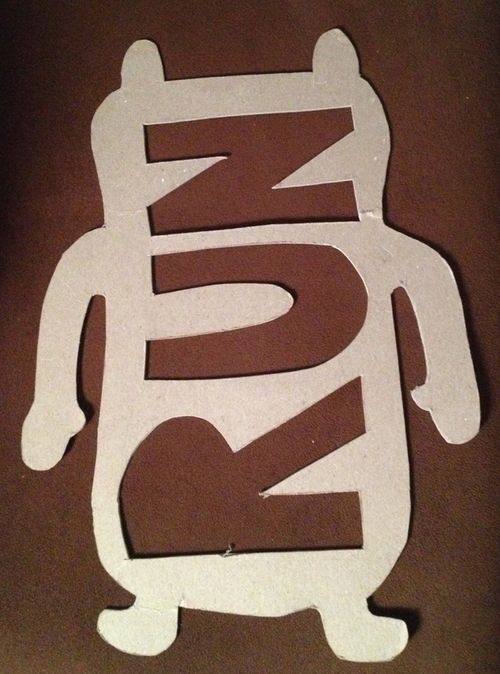 The next half was rough...lots of hills and I got really tired around mile 16.  Fortunately the last 3 miles or so are mostly downhill or flat.  Here I am heading towards the sweet sweet finish line. 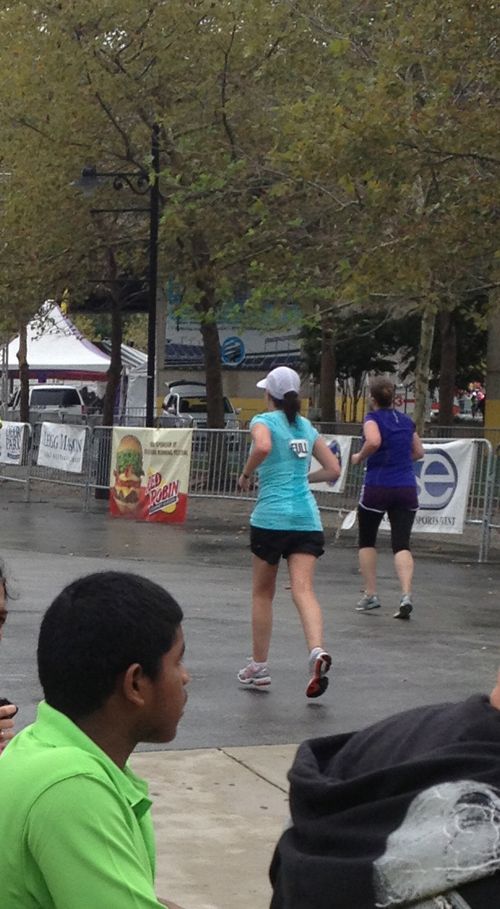 I was so happy my parents and mother-in-law came to see me cross the finish line!  My mom kept saying she couldn't believe I did it.  I understood since I couldn't believe it either!  Plus, my mom remembers all those years of me struggling through gym class and her having to call the gym teachers to beg them not to give me a failing grade...and now I run marathons. 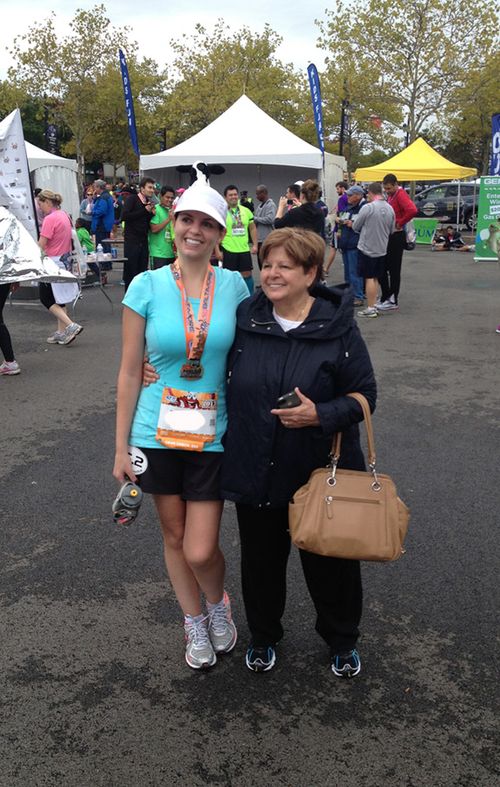 I have to admit, I was kind of terrified for the next 24 hours or so.  I was really nervous before the race and fine during it, but once I finished I was afraid I would keel over from exhaustion, that I had pushed myself too hard, that my body couldn't handle a full marathon and that my heart would just stop.  I was more or less on the verge of a panic attack till the next day, when I figured that if I had made it through the night I was probably in the clear.  Odd, but I guess if you're as wound up as I am it made sense to worry about such a thing.  I wouldn't be me if I didn't worry about everything in the whole wide world!

Some observations and fun facts:

Best sign I saw while running (besides the husband's, of course):  "Run, Omar's comin'!"  So perfect for Baltimore.

Craziest thing I saw:  a guy in a Dunkin' Donuts costume who was also running the full marathon.  I have absolutely no idea how he managed to run the entire time being dressed as an enormous coffee cup.

Number of people wearing Lululemon, including me:  5.

Worst stretch:  between miles 16 and 19, where it was pretty much all uphill.  I ended up walking most of those 3 miles.

Best stretch:  Besides the few yards to the finish line, the best part was around miles 5 and 6 because a.  it was downhill and b. part of my regular training route.  Running along a familiar street helped ease the nerves.

Post-race meal(s) - slice of pepperoni pizza about 2 hours after I got back from the race; then a cheeseburger with bacon and a fried egg, french fries and an ice cream sundae with bananas (need that potassium!) and peanut butter sauce.  Then the next morning I went to brunch, which included migas, home fries and 2 mimosas.  It's safe to say I ate back all the calories I burned and many more.  Oops.

Despite the drizzly, humid weather I had a good time.  I was pleasantly surprised that there were still so many spectators out on the course by the time I finished, and like last year the race was well-organized with plenty of volunteers.  Also, I had a super secret time goal and I beat it by 4 minutes, so I was really happy with that (dare I say I was proud of it?).  Finally, for all the kids who made fun of me in gym class, the teachers who berated me for being weak and slow and uncoordinated, to them I say:

EAT IT WITH A FORK!!

I'm still slow and uncoordinated, but I've got enough stamina and just enough coordination to put one foot in front of the other for 26.2 miles.  So they can take their stupid jock worship and silly Presidential Fitness tests and stick 'em where the sun don't shine.

Barring injury, I plan on running more marathons...just 1 or 2 per year and definitely no ultras, but I want to run more and get faster.

What were you up to this week?  And do you run?